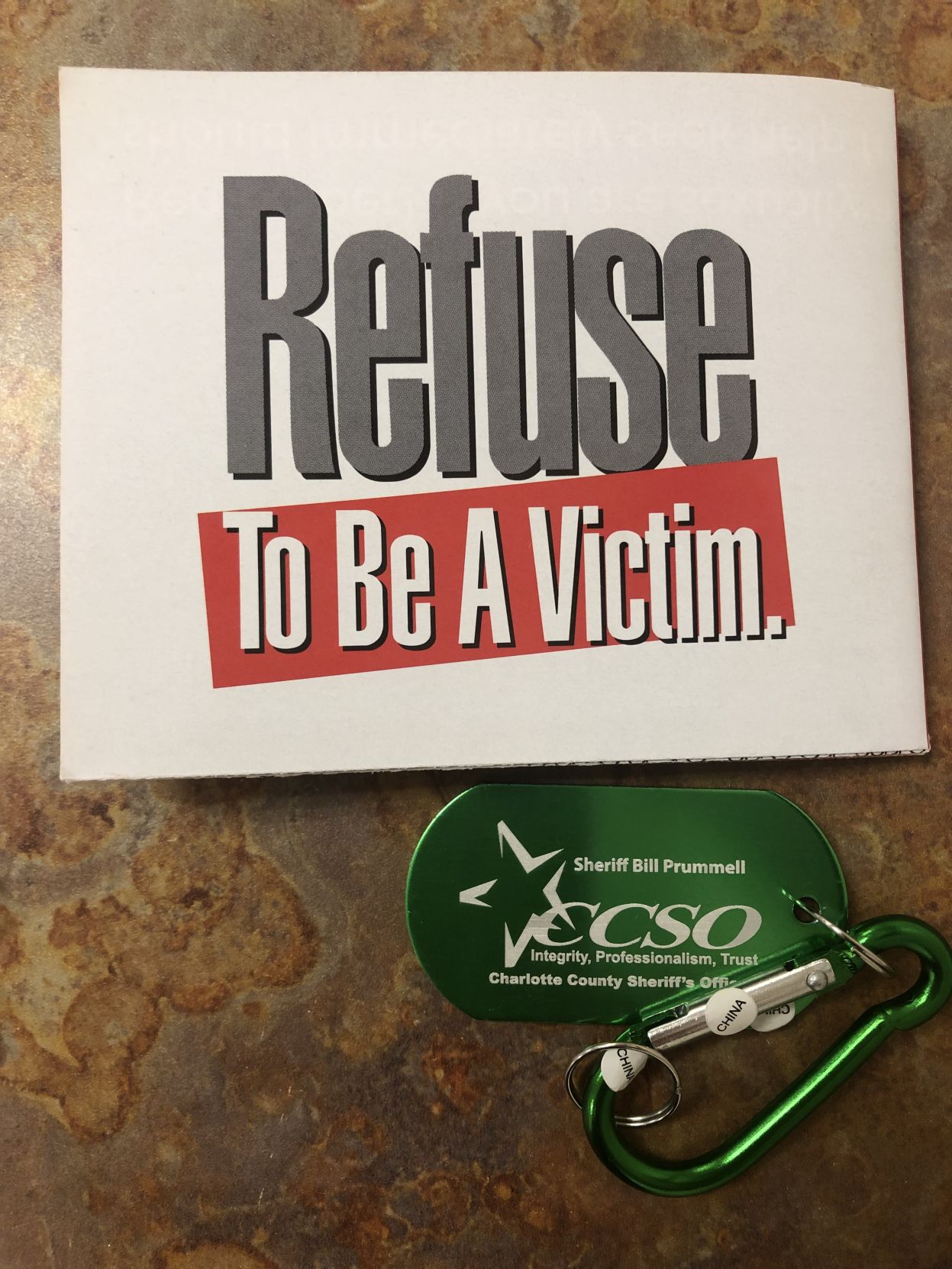 Students were provided with a pamphlet and a carabiner, which can be used to lock items like purses to shopping carts. 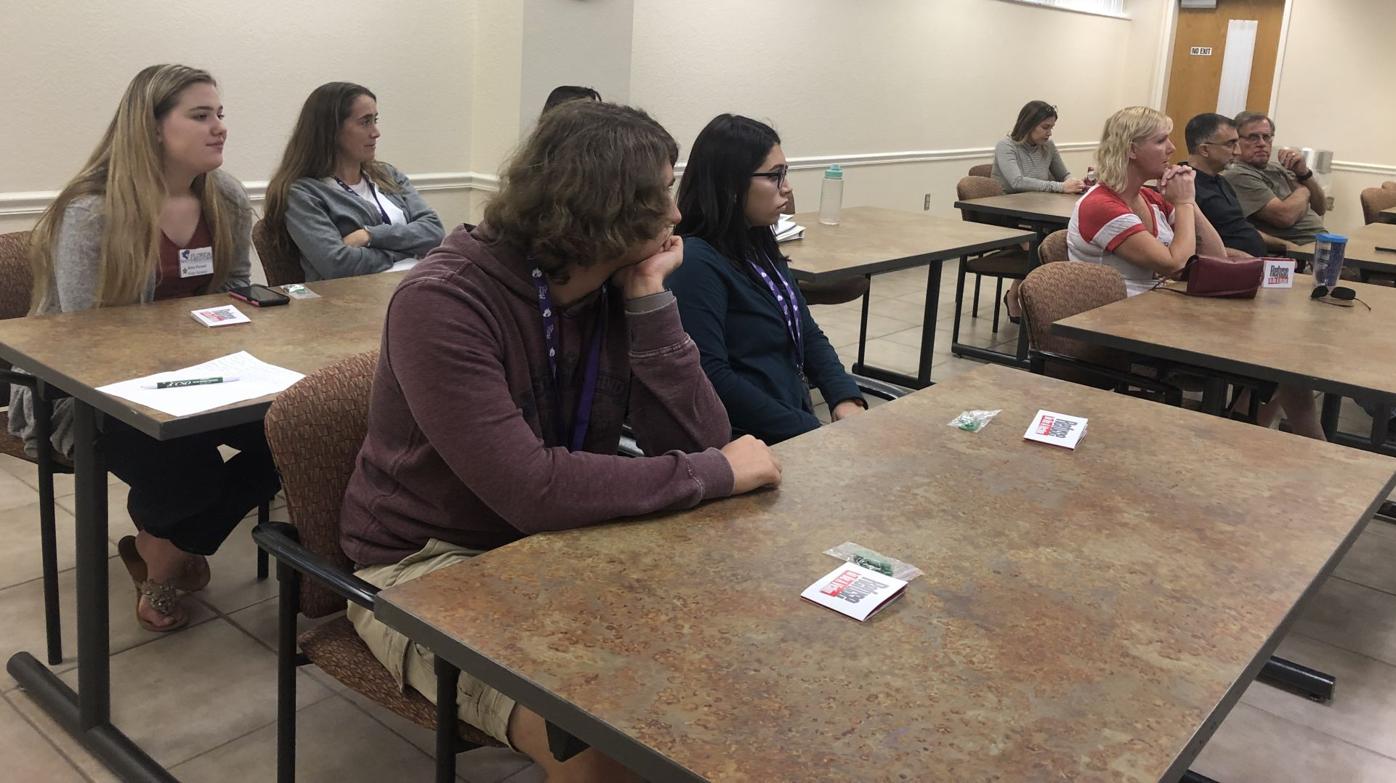 About 10 students attended the Refuse To Be A Victim seminar at Florida Southwestern State College Wednesday.

Students were provided with a pamphlet and a carabiner, which can be used to lock items like purses to shopping carts.

About 10 students attended the Refuse To Be A Victim seminar at Florida Southwestern State College Wednesday.

You don’t have to be nice.

That’s one message students at Florida Southwestern State College heard at a seminar by the Charlotte County Sheriff’s Office on avoiding becoming a victim of crime.

“If someone’s in your face, you don’t have to take it,” said Crime Prevention Specialist Tammy Wilkie.

Wilkie told a story about being parked outside Books-A-Million. When she came out of the store, a man was waiting at her Sheriff’s Office Community Affairs’ car to criticize the agency and argue with her. Being unarmed, she said she drove away shaking and didn’t want to drive the company car anymore.

It took a year-and-a-half and a crime prevention seminar by Pretty Loaded for her to realize she didn’t have to go out to the car. She could have stayed in the store or asked an employee to walk her out. When she got there, she could have driven away instead of engaging with him.

Wilkie said particularly in her generation, women have been taught to be nice and pleasant, potentially putting themselves in harm’s way in an effort to be polite. Now, she wants to change the narrative. For college students, she especially wanted to make them aware it’s up to them to defend themselves.

“They think they’re invincible,” she said. “We need to plant the seed in their head that it’s a big world out there, and you’ve got to protect yourself. No one else is going to do it for you.”

The seminar was based on a presentation by the National Rifle Association called Refuse To Be A Victim, but guns and gun safety were not a part of it. Instead, the message focused more on situational awareness. Students were encouraged to think through their days and identify areas where they might be alone and vulnerable, creating a mental action plan for possible dangers.

Reserve Deputy Jorge Garcia, who taught the seminar with Wilkie, said when he’s out and about, he likes to look around and spot situations where people are making themselves easy victims. Some of the things he most commonly sees are women leaving purses on their shopping carts or packages in their vehicles in full view.

“People are oblivious to their surroundings,” he said.

On campus, students might have the mentality that nothing is going to happen to them, but crime can occur anywhere, Wilkie said, and the FSW campus isn’t too far from the jail. She encouraged students to avoid walking alone on campus after dark and not be on their cell phones or have earbuds in while walking.

“It takes you away,” she said. “You’re not in a stance where you can defend yourself.”

Kira Ferner, a student who is currently double enrolled at FSW and FSW Collegiate High School, came to the seminar to learn safety tips for when she transfers to a bigger university in Georgia next year.

“The unfamiliarity, not knowing what will happen,” she said. “It’s all around concerning.”

Ferner said she’s taken defense courses focused on physical self-defense but wanted to learn the mental component as well. She already does many of the tips, like keeping her keys in her hand and her purse close to her body, but she planned to implement more of the situational awareness and mental role-playing into her routine.