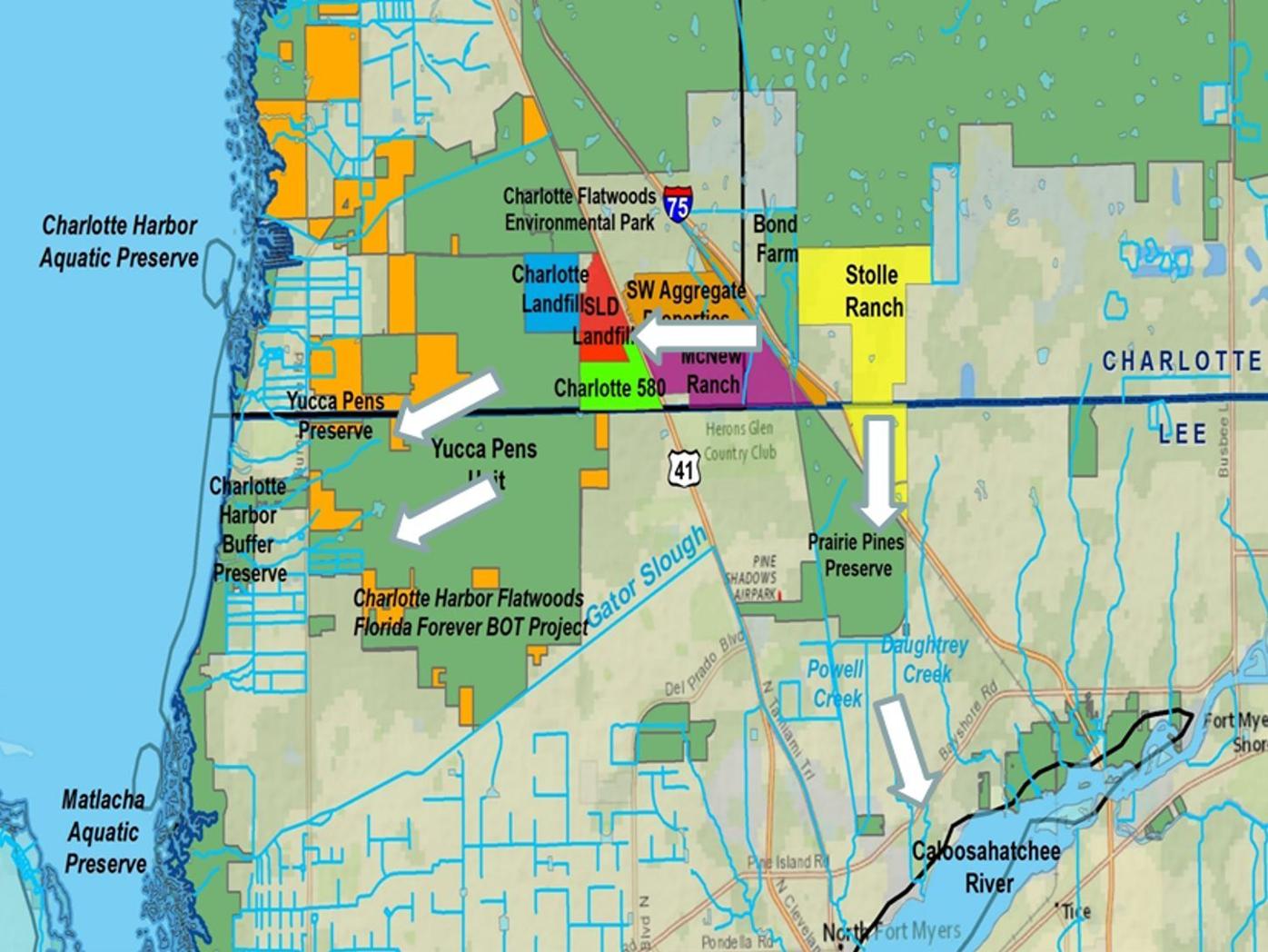 This map shows all the private land the state wants to buy in the midst of its wildlife management areas in Charlotte County: Cecil Webb, Fred Babcock, Yucca Pens. The recently purchased Bond Farm is in the middle next to I-75. The arrows show the direction of water flow that state environmental engineers want to create to bring fresh water back to Charlotte Harbor and the Caloosahatchee River. I-75, U.S. 41, railroad lines and private property berms have blocked that flow for many decades. 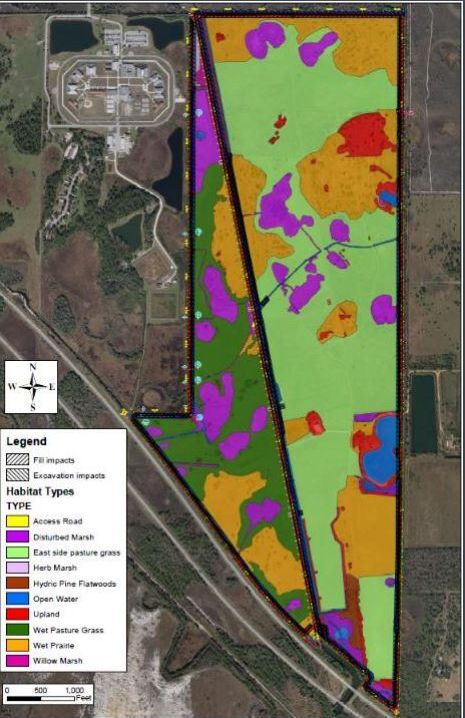 The recently acquired Bond Farm sits along I-75 to the east. The area showed here is where the state wants to store 538 acres of water in the wet season and release it slowly to the other side of the highways. Charlotte County Correctional Facility is on the upper left corner. I-75 runs along the lower left corner of the map. 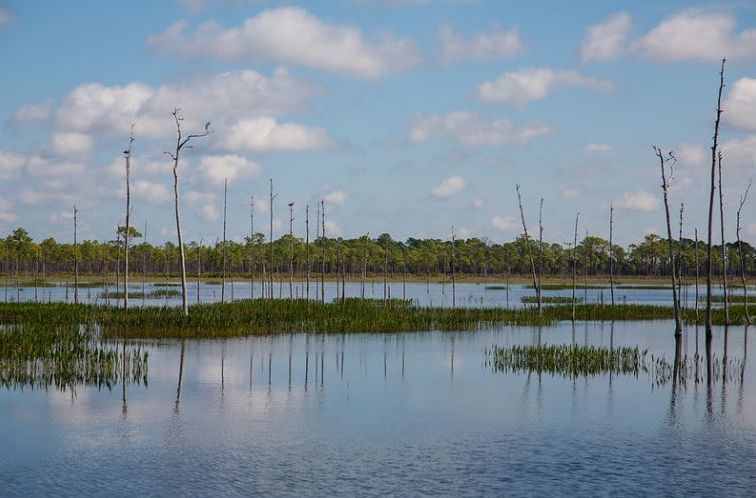 Water stacks up east of I-75 in Cecil Webb Wildlife Management Area. This causes trees to die and traditional animals like the quail to disappear. A long-sought project is underway to find a way to move that water where it used to go. 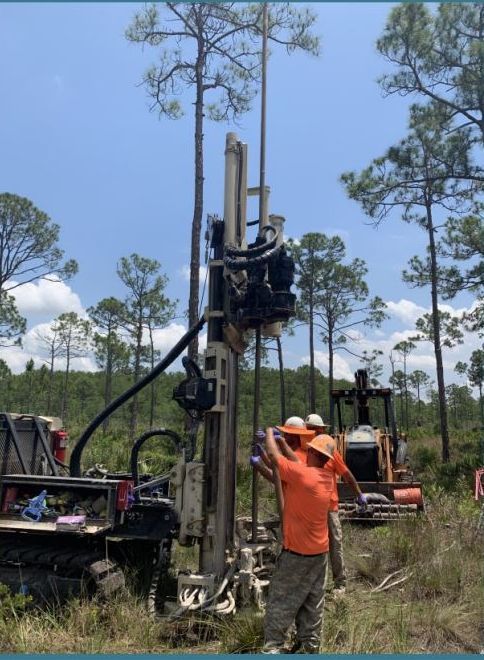 Scientists have been studying water levels and flow in the Yucca Pens Wildlife Management Area as part of a larger project to fix damage done historically to water flow into Charlotte Harbor. Yucca Pens has too little water compared to what it had before development and before large roadways such as U.S. 41 and I-75 cut it off from water out of the Cecil Webb Wildlife Management Area to the east. 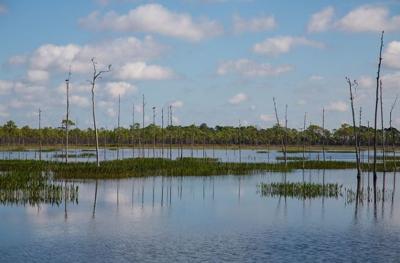 Most of the land in Charlotte County is undeveloped, but that doesn’t make it natural.

Vast stretches of this undeveloped land lie east of I-75 and U.S. 41. And while the state owns most of that now, earlier owners built up earthen barriers to control water flow and they built railroad lines. All of these things have blocked the flow of water to Charlotte Harbor and the Caloosahatchee River. These are both water bodies where algae blooms have grown out of control in recent years and where boat captains lament the loss of habitat for Florida’s famous sport fish.

In a plan to reverse some of this damage, the state is gearing up for a big water project next to I-75 and the Charlotte County Correctional Facility. It’s a project that may, in a few years, help improve the quality of water in the harbor and the state’s central river. If everything goes according to plan, the state wants to build a 538-acre water impoundment area on land they just bought called the Bond Farm, which was used for ranching.

That water will be used to transfer flood waters that build up in the undeveloped east and send it under I-75 and U.S. 41 to the county’s southwestern land and eventually the harbor and river, said Kim Fikoski. She is senior project manager with the South Florida Water Management District.

On Sept. 9, Florida Fish and Wildlife Conservation Commission will go before the county’s Board of Zoning Appeals to get a special exception to build the impoundment area on land zoned agricultural. The zoning negotiation is just one of many hurdles, however, before reaching the ultimate goal of restoring a more natural flow of water. That is the goal of the overall Charlotte Harbor Flatwoods Initiative.

Four state agencies are working together along with nonprofits such as the Coastal Heartland National Estuary Program. The overall flatwoods initiative is 10 years in the making. The other state agencies are Southwest Florida Water Management District and the Department of Environmental Protection.

One key piece now in negotiations is called Charlotte 580. That piece near the Bond farm would contain the water transport mechanisms, Fikoski said, to get the water to the other side of the highways. Regulators had to first prove the land was key to restoring water quality. They just did that, and now, with financing committed, they must negotiate a price with the owner, Fikoski said.

If the goal is to restore natural water flow, how does the state know what the natural flow should be? They don’t yet know, Fikoski said. They are expecting to get a two-year grant to study this, she said. Funding would come from the settlement with BP Oil after the Deep Water Horizon oil spill in the Gulf of Mexico in 2010.

Building an impoundment area will not recreate the natural sheet flow that once existed across the Florida landscape, however. Instead, the water will be held in place and released at the end of the wet season and into the dry season in Yucca Pens. Yucca Pens is now considered too dry, while Babcock/Webb is considered too wet. Trees are dying in Babcock/Webb along with the animals that relied on those trees, Fikoski said.

When the water flows now, Fikoski said, it tends to rush unimpeded into Matlacha Pass in Lee County, rather than slowly reach the harbor and the river.

The Bond farm impoundment will be similar to larger reservoirs planned for storing overflow water out of Lake Okeechobee for release into the Everglades, she said. The goal there is to keep the Everglades alive, and to prevent plagues of blue-green algae on the Caloosahatchee.

Those larger reservoir plans, however, have been criticized by environmental scientists. They say the blue green algae will just grow in the reservoir, because the water is not being cleaned by flowing naturally across the landscape. That water flowing into Lake Okeechobee is polluted by fertilized agriculture and by residential development that lacks modern sewers.

Water coming from Babcock/Webb is not as polluted, Fikoski said. Still, she acknowledged that the impoundment structure is only one tool in trying to fix declining water quality in the harbor and rivers.

“Water storage is just one tool in your tool bag,” Fikoski said.