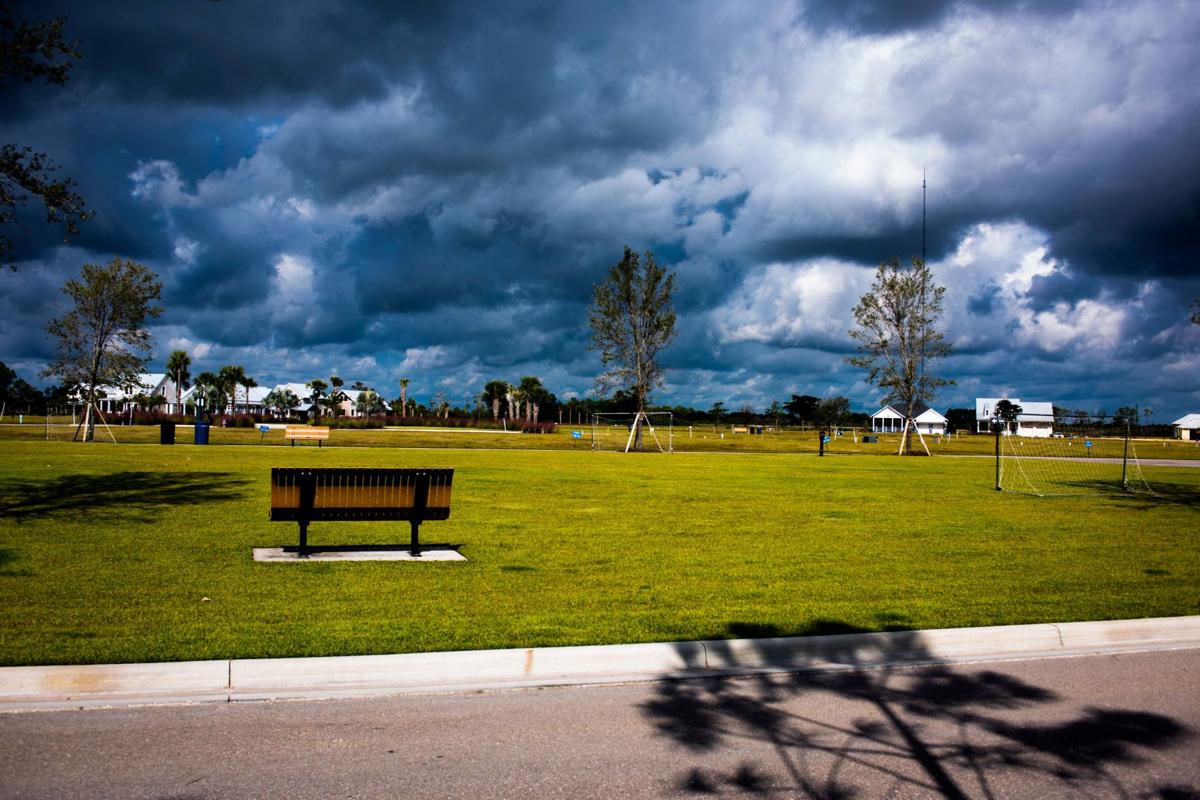 An open field view is seen recently from the front porch of a home under construction, in Babcock Ranch, Florida. 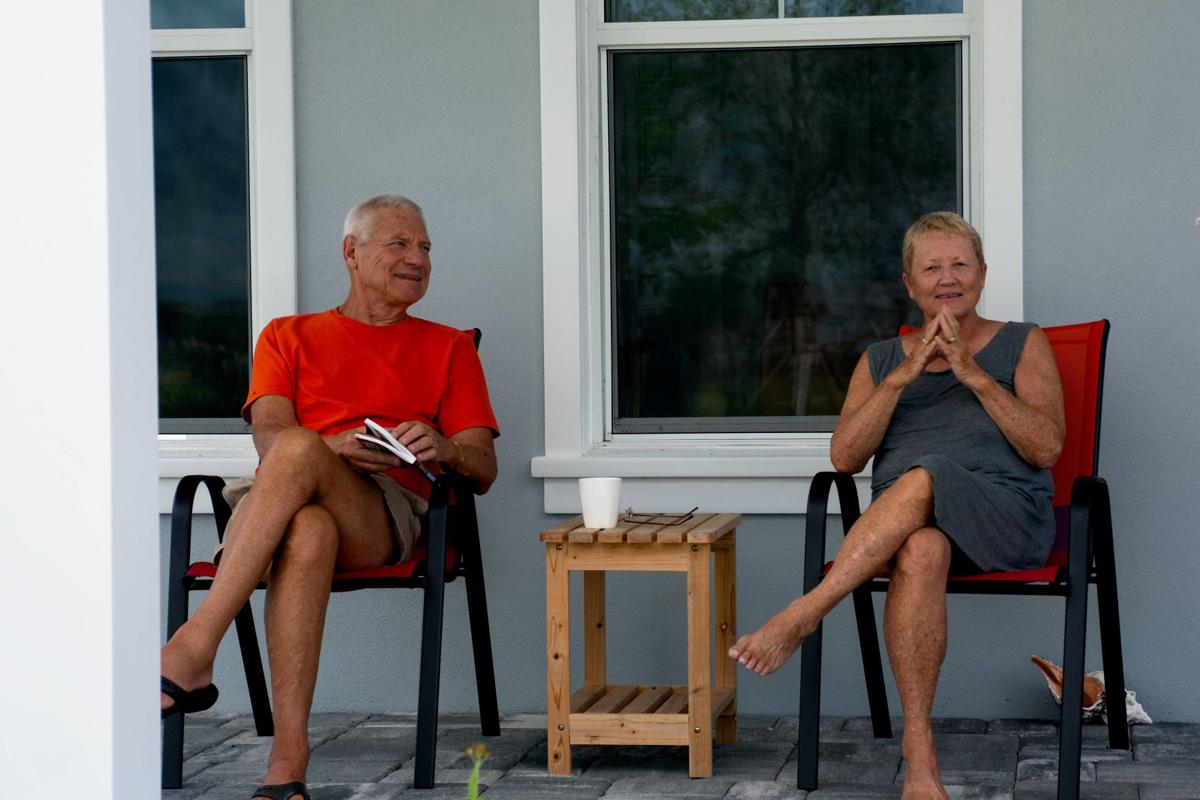 Ernie and Karen von Heimburg sit on their front porch at Babcock Ranch. 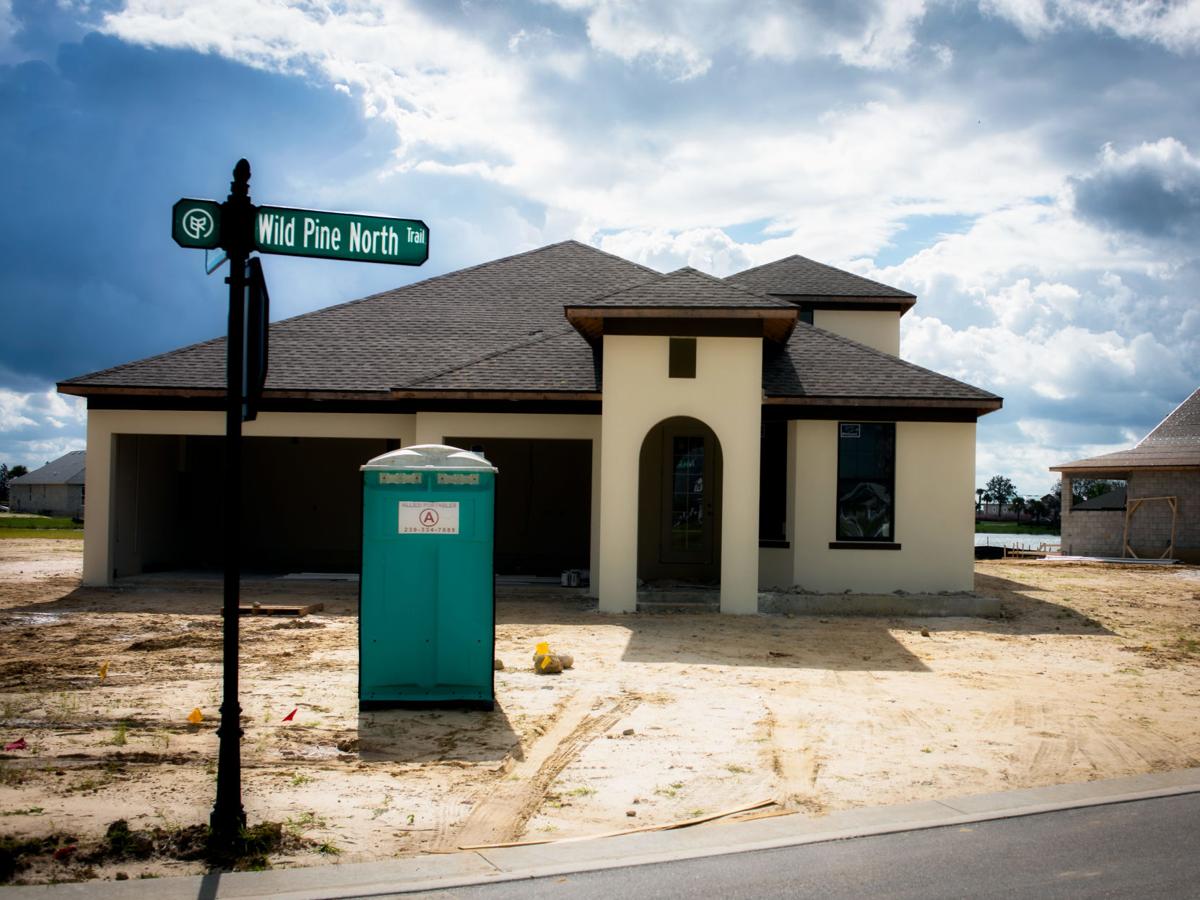 A house recently under construction at Babcock Ranch in Charlotte County. 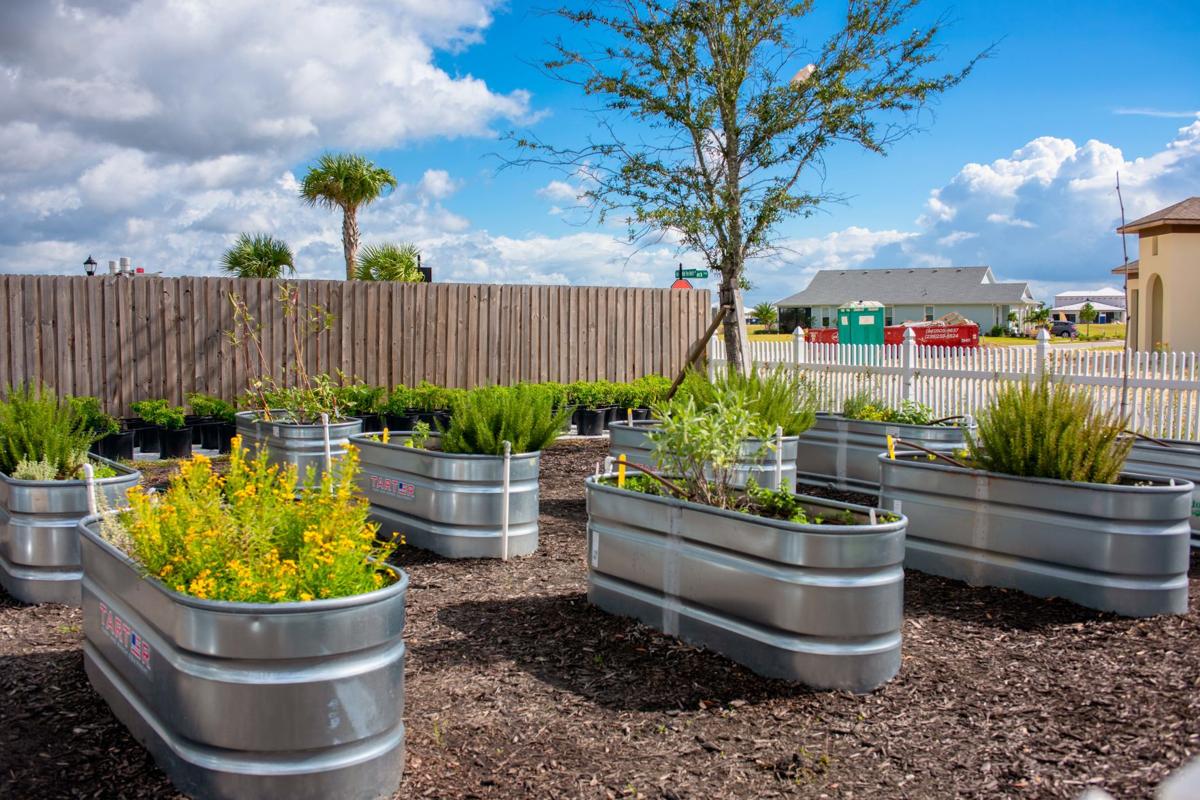 A community area contains planters, available to residents of Babcock Ranch. Some edibles grown here are used as ingredients at the local restaurant. 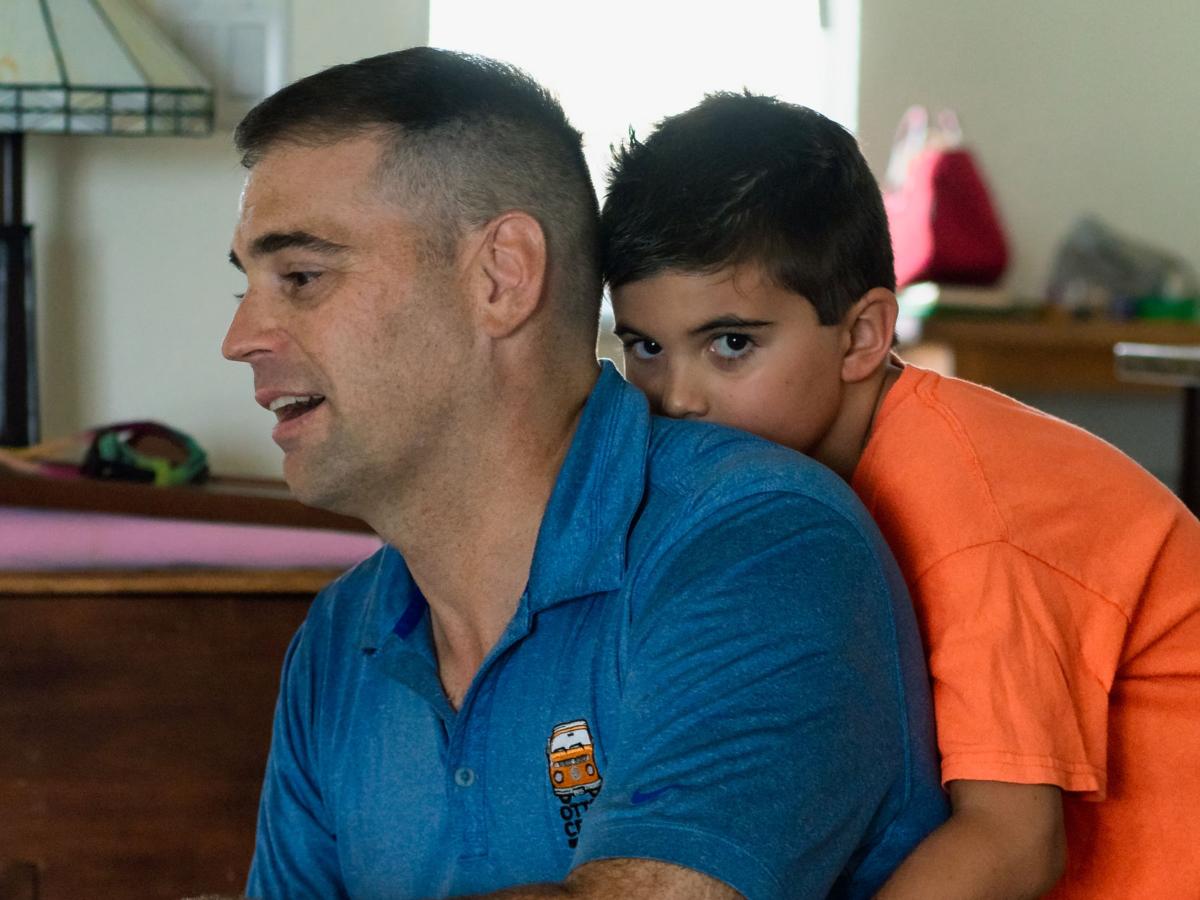 Todd Shuttleworth explains why he and his family moved from Vermont to Babcock Ranch, as son Grant looks over his shoulder. “The school here (at Babcock) teaches our kids to be creative.” 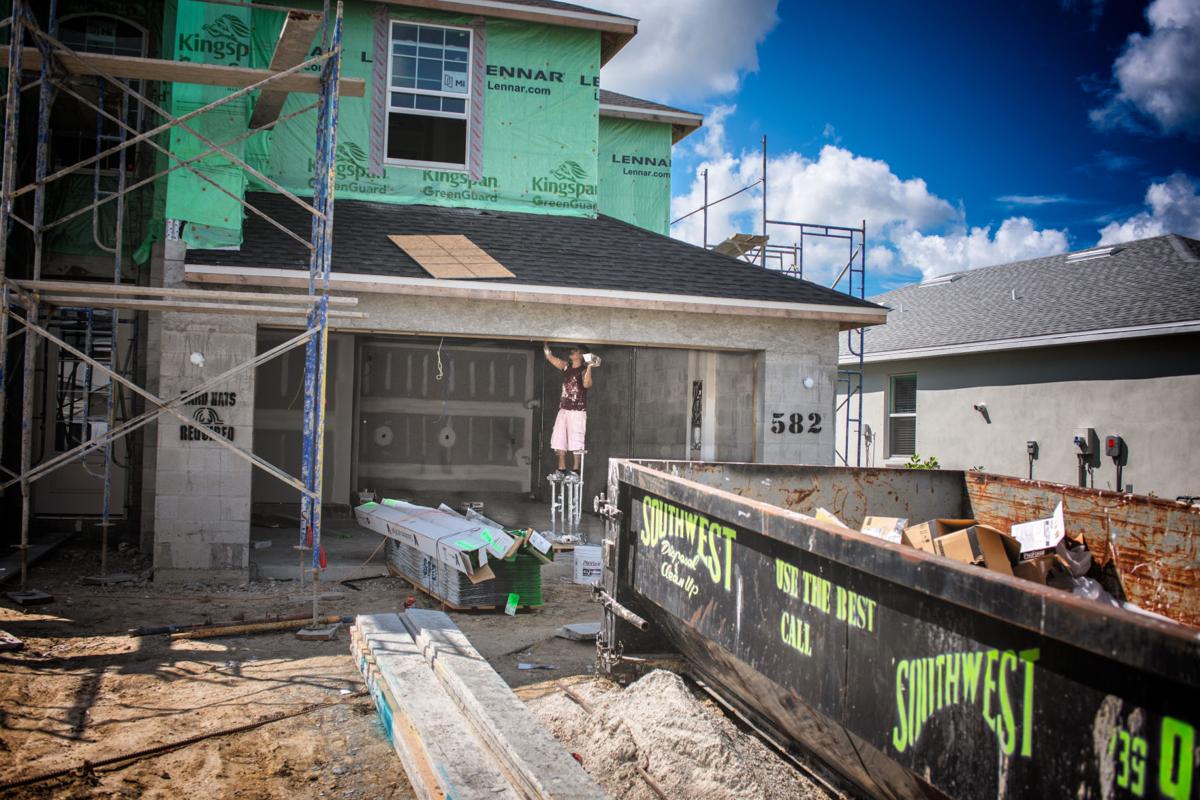 Ramon Morales stands on stilts as he applies spackle to an unfinished garage, in Babcock Ranch.

An open field view is seen recently from the front porch of a home under construction, in Babcock Ranch, Florida.

Ernie and Karen von Heimburg sit on their front porch at Babcock Ranch.

A house recently under construction at Babcock Ranch in Charlotte County.

A community area contains planters, available to residents of Babcock Ranch. Some edibles grown here are used as ingredients at the local restaurant.

Todd Shuttleworth explains why he and his family moved from Vermont to Babcock Ranch, as son Grant looks over his shoulder. “The school here (at Babcock) teaches our kids to be creative.”

Ramon Morales stands on stilts as he applies spackle to an unfinished garage, in Babcock Ranch.

Keep Estero, just give me that countryside.

The von Heimburgs left a more costly retirement home on Estero Beach to take up residence on a street that is rapidly filling up, in Babcock Ranch’s Lake Timber neighborhood. It’s out there, 35 minutes from downtown Punta Gorda and 30 minutes from Fort Myers. They are among the first residents to participate in this experiment called Babcock Ranch.

“It’s a little more remote,” Ernie von Heimburg said of the new location. “We love the peace and quiet.”

The first residents arrived in January. Today, more than 75 households are in their new homes, Babcock Ranch President Rick Severance said. A total of 217 have been sold, with more structures going up daily. Commercial space currently totals about 100,000 square feet, with more on the way.

The experiment is whether the planned city in the county’s rural interior can become something different from other developments in Florida. Will it protect the water and soil and the wild places that still remain on its borders? Will it become a home for the middle class as well as the rich, the young and the old? Will there be enough to do out there, or will everyone drive to the cities for a social life?

Babcock has been on the drawing board since before 2006. Former NFL football player Syd Kitson, CEO of Kitson and Partners, bought 91,000 acres of ranch, wild lands and dirt mine from the Babcock family heirs. The family members wanted to sell and did not want to see the land carved up, the story goes.

Kitson stepped in with a proposal to buy the whole property, and sold most of it to the state for $350 million to preserve it. He gave another 440 acres for Florida Power and Light for a solar plant. Then he and others drew up rules that would make the densely populated city as environmentally sound as possible, with a good view of nature.

Some things that were not well-known, but are coming to fruition, include assisted living for the elderly.

“We have people who are moving in, and they’re waiting for assisted living, because they need to bring their parents,” Kitson said.

One of those is Kitson’s executive assistant Lisa Hall, who is waiting to move herself, she said, until her parents can move to assisted living.

And in some sections, homeowners can build separate structures next to their own, and rent them out. Rentals cannot be short term, but other than that, they are not restricted; for example, it need not be a family member.

“Several builders are doing accessory apartments,” Kitson said. “If somebody wants one, they can do it now.”

They’re called granny flats, but grandparents generally don’t live in this type of housing. Today, it’s more likely to be a millennial child coming home to roost. Either way, it provides a way for a homeowner to generate income from their property. These are banned in many Florida communities, but not in Babcock.

So far, new citizens interviewed by the Sun seemed giddy in anticipation of their new life.

“We’re at the age where I don’t think there’s anything that’s going to be perfect,” said his wife, Karen. “I think it’s amazing what they’ve done.”

Even before moving in, many had met their neighbors online on Facebook pages.

Kelli Shuttleworth was just moving in with her husband, two sons and two dogs. But they already knew many people through Facebook and a Mom’s Night gathering.

“Everybody hangs out at the splash pad,” she said of the fountain area in Founder’s Square. On Fridays, families with school children gather there.

“It seems very family-oriented,” Shuttleworth said. “It’s going to be a good place for the kids to grow up.”

Not so long ago, the Shuttleworths were living in a part of Vermont near the Canadian border called the Northeast Kingdom. They were raising sheep there until Todd started working in food manufacturing.

Asked if they were homesick for Vermont, Todd said, a little. Not really, said Kelli.

“This was the most-Vermont place in Florida we could find,” she said.

The Shuttleworths have been living temporarily in Punta Gorda, but decided that living near the water might not be the best long-term option in Florida.

Matt and Niestra Ruttenberg have not moved in yet, but were hanging out on the outdoor tables on Founder’s Square recently. They are gathering at the one restaurant, Table and Tap, at weekly meet-ups with neighbors.

“We haven’t even moved in yet, and we already have so many friends,” Niestra said.

The environmental pitch resonates with many of the pioneer residents.

Beth Howlett is doing her own yard work instead of paying for it to be done. The retiree is learning what native plants to use. The homeowners association only allows 30 percent grass in the yard. The rest must be native plants, eventually including the shoreline on the lakes. This requires less water, and less mowing, Kitson told the Sun.

After watching the increasing congestion and environmental stress in coastal Lee County, the von Heimbergs were drawn to the environmental message.

“We liked the sustainability here, and being in nature,” Karen said.

The other thing that new residents want, more than privacy or a backyard pool, is a sense of community.

Linda Mignano has set out two metal folding chairs on her small front porch for her and her husband to sit in — where they can watch as the construction workers labor across the street on the new homes. They are still waiting for their regular furniture to arrive.

They spent 10 years in Fort Myers.

Mignano is hopeful that Babcock will build into a real community.

“That’s the way it used to be, community,” she said. “We’ve gotten away from that.”

Not everything about the future Babcock appeals to the newest residents.

It’s the gated community that most disappointed Karen von Heimburg.

“That surprises me,” she said of the news that there would be such subdivisions developing within Babcock. “I think people today are too concerned about security instead of caring about each other.”

The gates bothered her more than the news that golf communities would be coming soon.

“As long as it’s not near me,” she said of the golf courses. “I thought that’s what they were trying to get away from.”

Severance said Babcock was always designed and authorized to have up to three golf courses. This is true, even though Kitson originally pitched the community as not the typical golf course subdivision. Any golf course will have to follow strict rules to prevent undue environmental impact, he said.

“At the end of the day, it’s always been something that we have contemplated,” Severance said. “I think they can be complementary. Golf is a choice some people want to make. ... They still have to work with all the (environmental) restrictions.”

“We’ve always been entitled to 54 holes of golf,” said Severance.

Any community needs to have options, he said.

“Especially as large as we are, you would need to be able to satisfy the market,” Severance said.

“That’s fine,” Howlett said of gates and golf. “It’s not my lifestyle.”

As long as she doesn’t have to join a golf club, Mignano said she’s OK with a golf subdivision elsewhere in the community.

“You can’t control everything in your life,” she said.

The Ruttenbergs also accept the idea of a golf course and gates, elsewhere.

“This is a city. It’s not just a gated community,” Niestra Ruttenberg said.

What do they want to see more of?

The von Heimburgs are hoping for more birds. They believe the birds will come with more trees. Babcock has already transplanted more than 200 mature oaks and pines from places on the property where roads went in. More trees are on the way, Hall said.

“We can’t wait for more restaurants, more to do,” said Niestra Ruttenberg.

“A movie theater would be nice,” said her husband Matt.

In other parts of the state, one thing that worries many homeowners is to be living near apartment renters, who have less invested financially in their home. But the newest Babcock residents believe that the community will need that.

“The philosophy of the town was to have something for everyone,” said Howlett.