R. Roy Petteway of Petteway Growers Citrus Nursery will market 100,000 young citrus trees this season. Here they grow in a greenhouse on their property in Hardee County, where the Petterways also have cattle and land management operations.

R. Roy Petteway inspects Hamlin orange trees at his family’s Petteway Citrus & Cattle property in Zolfo Springs in Hardee County. The generational farmer is optimistic that citrus farming is in recovery from storms, disease and consumers turning away from juices. 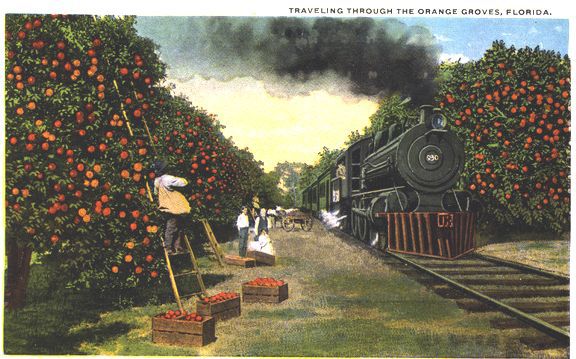 Florida citrus has been romanticized and marketed to northeners gulping OJ at the breakfast table. 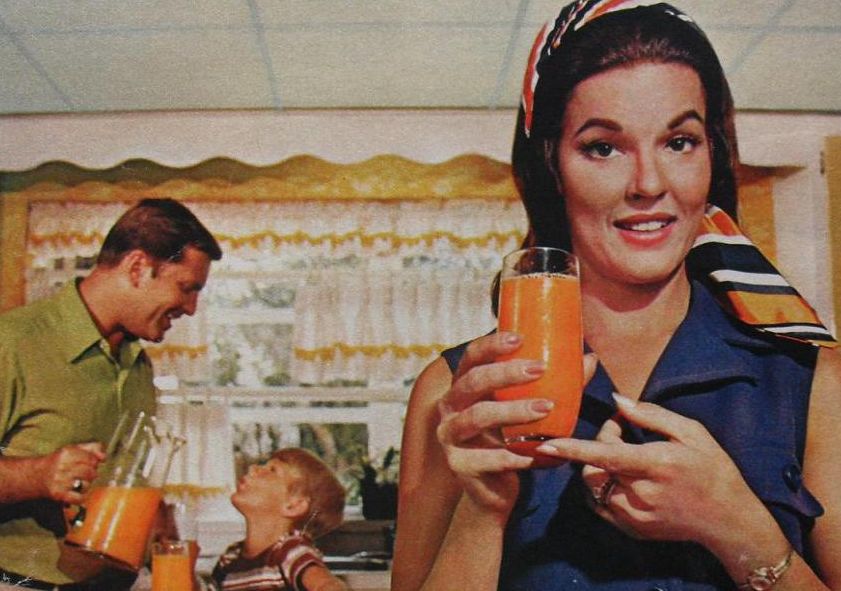 Anita Bryant in the 1960s and onward was the queen of OJ for the Florida Citrus Commission. “Breakfast without orange juice,” she told us, “is like a day without sunshine.” 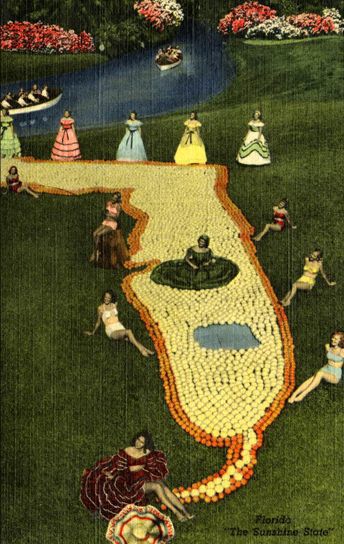 Florida citrus marketing packed this postcard with a couple of juicy messages decades ago.

R. Roy Petteway of Petteway Growers Citrus Nursery will market 100,000 young citrus trees this season. Here they grow in a greenhouse on their property in Hardee County, where the Petterways also have cattle and land management operations.

R. Roy Petteway inspects Hamlin orange trees at his family’s Petteway Citrus & Cattle property in Zolfo Springs in Hardee County. The generational farmer is optimistic that citrus farming is in recovery from storms, disease and consumers turning away from juices.

Florida citrus has been romanticized and marketed to northeners gulping OJ at the breakfast table.

Anita Bryant in the 1960s and onward was the queen of OJ for the Florida Citrus Commission. “Breakfast without orange juice,” she told us, “is like a day without sunshine.”

Florida citrus marketing packed this postcard with a couple of juicy messages decades ago.

But Petteway figures you grow it, you drink it, ensuring the future at Petteway Citrus and Cattle and Florida citrus in general, he said. The multi-generational Petteways started about 100 years ago in the turpentine business, switched to orange groves as Florida’s pine stock vanished. They settled in Zolfo Springs, today operating an Angus cattle, nursery and grove enterprise from Ramon Petteway Road.

And Mother Nature is doing her part on behalf of the Petteways, and for the survival of Florida’s citrus industry, as well, everything from grapefruit to oranges, lemons and hybrid tangelos. The U.S. Department of Agriculture on Friday released numbers showing that Florida citrus continues climbing out of a hole, overall per-box production is up. This season’s good rain and a grip on greening have ensured a rebounding orange crop, for instance.

To counter the citrus industry’s decade-long tumble, Petteway and other growers are in schools and media, wherever there are ears for listening, preaching OJ’s yummy taste and its vitamin-packed nutrition. And the Florida Citrus Commission is pushing that message internationally too, the way it did with Anita Bryant in the 1960s — “breakfast without orange juice,” she told us, “is like a day without sunshine.” The Florida Department of Citrus’s Captain Citrus, a superhero fueled by juice and who fights “icy villains,” is another of the agency’s messengers outreaching to kids.

Forecasters predict some 74 million boxes of Florida fruit produced in the 2019-2020 growing season, in some instances nearly twice the production after Hurricane Irma in September 2017. The storm ruined Florida’s heartland, reportedly knocked half the fruit off its trees. It also flooded melon, vegetable and tomato fields, ripped up nurseries and killed important wildlife.

This season’s citrus crop isn’t close to the ‘90s, when 250 million or so boxes of fruit were produced per year. But Irma capped rough years that included a greening disease that caused trees to prematurely drop oranges. At its height, the greening virus, known as Huanglongbing, or HLB, or the yellow dragon disease, killed citrus trees worldwide. It spreads from an insect, the Asian citrus psyllid. The virus attacks roots and eventually kills its host. Growers lost mature trees cranking out oranges like minted pennies and that had created great wealth. And there’s still no silver bullet, though science has new trees that better reroot themselves, according to Petteway, who also sits on the board of the Peace River Valley Citrus Growers Association, a 350-member group in DeSoto County, the state’s top citrus producing county.

That association’s executive director remains concerned that import orange concentrate undermines Florida growers. Brazil and Mexico stepped in with juice to Florida processors when Irma ruined the state’s citrus production. But that was a three-year deal. And Brazil is in a drought, which could reverse the flow of concentrate.

But America, apparently, has fallen out of love with orange juice. Last year, orange juice sales hit the lowest level in at least 15 years, according to a Nielsen survey. The reason for OJ’s decline, according to marketplace watchdog The Food Institute, is we don’t drink as much of it as we once did. Or any fruit juice, for that matter. That can be attributed to eating habits, little time at the breakfast table, according to details posted on The Food Institute website. OJ is also portrayed as less healthful, too sugary: A 12-ounce glass contains nine teaspoons of sugar, about the same as a 12-ounce Coke. Growers counter that juice sugar is natural, therefore less harmful.

Still: “For those drinkers who are aware of the nutritional content of their foods, orange juice is now seen as laboratory concoction rather than freshly squeezed fruit,” according to authors in The Food Institute report.

It’s no exaggeration that citrus made Florida Florida, this hot and sandy spit that Europeans 500 years ago thought may produce gold. Which in a sense orange juice is.

The way we think, you’d believe Florida’s earliest people squeezed oranges and wiped the juice from their chins. But it was Christopher Columbus and Juan Ponce de Leon 500 years ago bringing citrus to the New World, the Caribbean and coastal proxies. A mid 19th-century freeze would drive growers exclusively to Florida, however. A man named Douglas Dummett is credited with restoring things with his Indian River citrus. He is supposed to have grafted sour wild oranges with a sweeter domestic stock. The stuff was so delicious that it would bring $1 a box in northern ports.

The beverage for decades was like bacon and eggs on American breakfast tables. Following a concentrate process after WWII, orange juice consumption jumped from under eight pounds per person in 1950 to over 20 pounds in 1960.

Florida’s production of concentrated juice went from 226,000 gallons in 1946 to more than 116 million in 1962. By 1970, 90% of Florida’s oranges were being used to make orange juice and the vast majority of that was from concentrate.

What really devastated growers and drove many of them out of business or into alternative crops such as blueberries was the yellow dragon virus. Although lingering for decades, HLB like a dormant cancer kicked into gear with Hurricane Charley in 2004. Storms reportedly sweep diseases into North America. And according to state researchers, HLB gained a foothold in Florida with Charley. Nursery growers endure such challenges, pests hitching rides on imported plants. But some of those can be eradicated with predator wasps, however. There is no such creature for HLB.

Petteway, who is 33, an only son and is Little Roy to his family, recalls mature oranges at HLB’s zenith the size of ping-pong balls. Farmers with stashed cash hung on by their thumbs, he said. Others sold out, taking the money from land developers. The Peace River Valley Citrus Growers Association, for instance, has lost some 20,000 or so farming acres.

But this year Petteway’s Hamlin oranges will be normal, baseball-sized fruit. The science of roots working like heart arteries bypassing bad ones, water applications and millions in research dollars are controlling HLB. And Florida farmers are diversifying too, which includes medical marijuana and hemp, that could soon create a new class of Florida farmer. Petteway also raises beef cattle and Petteway Growers Citrus Nursery that his father started in the 1970s sells young citrus trees, 100,000 or so this season. The family also caretakes and manages agriculture for other grove owners. In all, the family’s operation caretakes or owns some 1,400 acres, he said, which runs about $1,000 per acre to maintain each season.

But should Florida voters legalize recreational pot, Petteway said, kiddingly, “I’m out of the orange business.”

He fully expects that his yet-born prodigy will become the next generation of Petteways in citrus and cattle farming. No Little Little Roy, however, he said with a sunshine bright smile and contagious energy that are surely byproducts of drinking eight daily ounces of OJ.