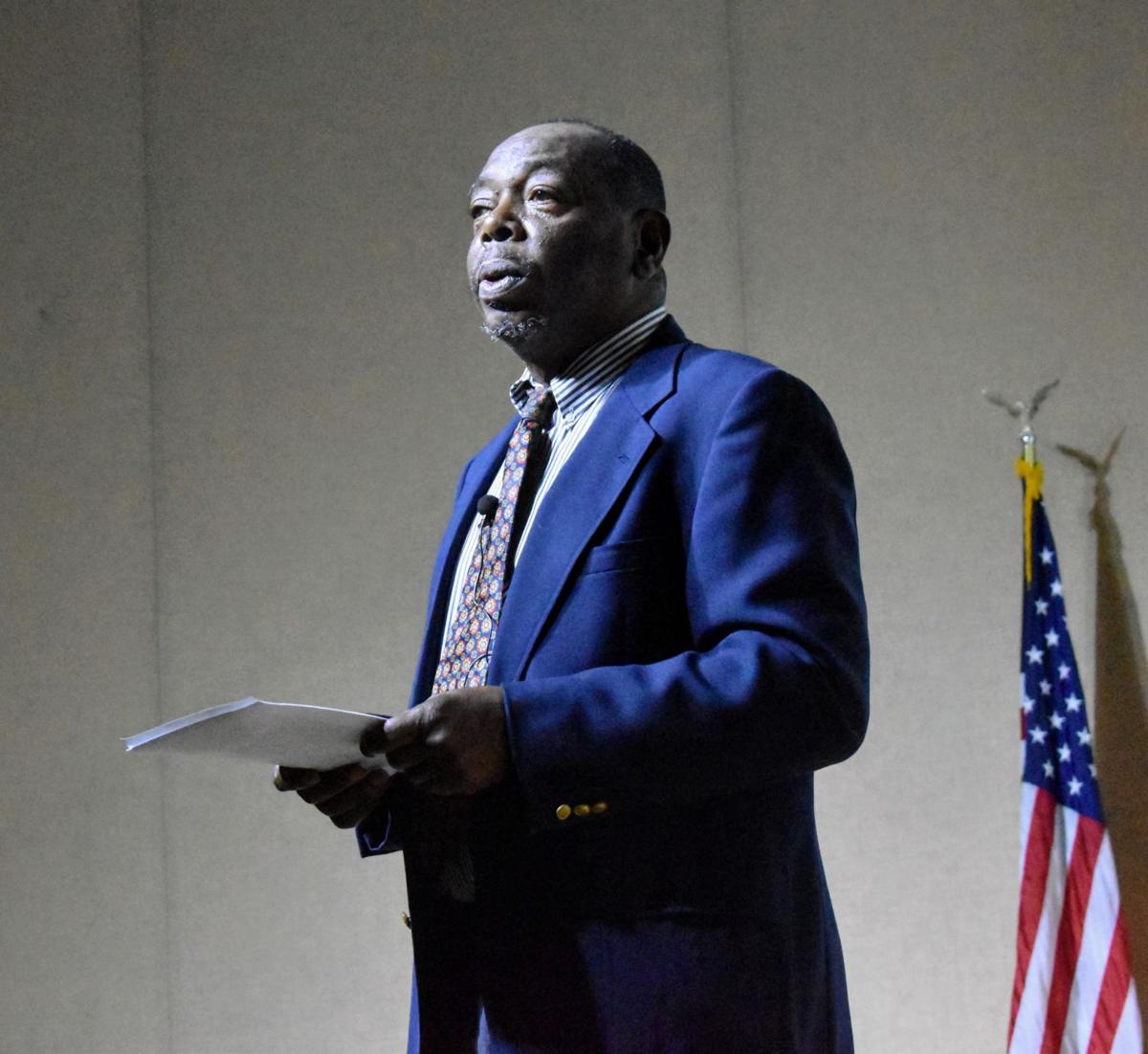 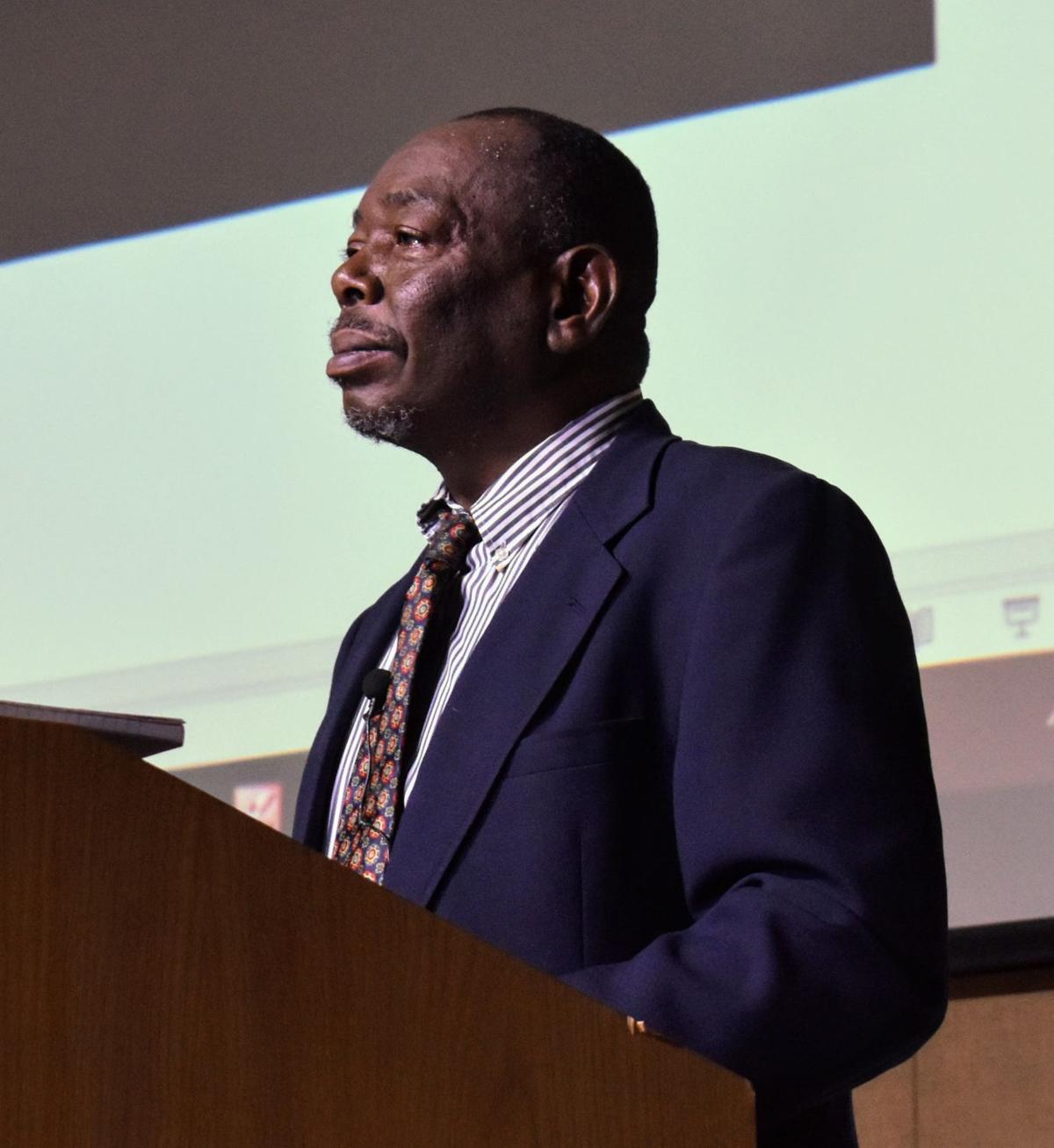 James Abraham hopes that museum goers learned that “we live in a pluralistic, multi-cultural society” Wednesday after his lecture about the Tuskegee Airmen.

James Abraham hopes that museum goers learned that “we live in a pluralistic, multi-cultural society” Wednesday after his lecture about the Tuskegee Airmen.

PUNTA GORDA — Lt. Charles Dryden watched as Nazi prisoners of war were allowed into the officer’s club where he was not welcome.

Dryden, one of the original Tuskegee Airmen, a group of black military fighter and bomber pilots during World War II, was among those honored Wednesday at James Abraham’s lecture “Black Hopes, Blue Skies” at the Military Heritage Museum.

“It was lovely to see his face up there,” said Dryden’s cousin, local author Naomi Pringle.

Abraham described the past as a river, with too many people approaching black history — as well as the history of women, Native Americans Latin Americans — “as if these are parts that can be separated from the whole,” he said.

“Sure there are differences, but they are parts of a stream, of a river, of a mighty river that really is our shared history. They may be in different currents, but they all flow together.”

Before 1940, the U.S. Air Corps, now the U.S. Air Force, wouldn’t recruit black people, Abraham said. There was a stigma throughout the world’s millitaries that black soldiers lacked the qualifications and skills for combat.

But then, in 1941, the first all African-American pursuit squadron was formed, based in Tuskegee, Alabama.

One of the trainers, C. Alfred Anderson, or “Chief,” had to teach himself how to fly as no one wanted to train an African-American. He is considered the pioneer of black aviation.

When the Tuskegee Airmen first flew in the service, they were given sub-par and outdated planes.

One Tuskegee Airman, Charles Bailey, was a Punta Gorda native and one of the seven Bailey Brothers to serve their country in World War II and Korea. He had a Thunderbolt named “Josephine” and flew 133 missions, Abraham said.

When the base was desegregated, pilots in training would help each other figure out math problems and sit together at lunch regardless of race. “Despite official government policy, people were people,” Abraham said, though not everyone felt that way.

Even though the Tuskegee Airmen were one of the most highly respected fighter groups of World War II, when they came home, they were ignored. Bailey couldn’t get a job in aviation, despite his successful military career.

That’s why Abraham wanted to bring these heroes to light. “After years of neglect, they’re finally recognized with the honor they deserve,” he said.

Growing up, Joyce Rose didn’t understand why her uncle, also a Tuskegee Airman, was not being treated well after fighting for his country. She’s happy now that people are aware of their contributions.

Additional free classes include: “The Bailey Brothers, Bronze Warriors for Freedom,” to be held at 6 p.m., on Feb. 27 at the Charlotte County Democrats, 3596 Tamiami Trail in Port Charlotte. Call 941-764-8440 for more information.