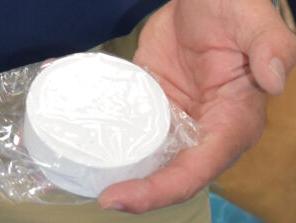 Three-inch chlorine tablets used to purify swimming pools, have been in short supply since a fire destroyed Louisiana factory where 40% are made.The company is expected to be up and running next year at greater capacity, but meanwhile U.S. supply has been tight. 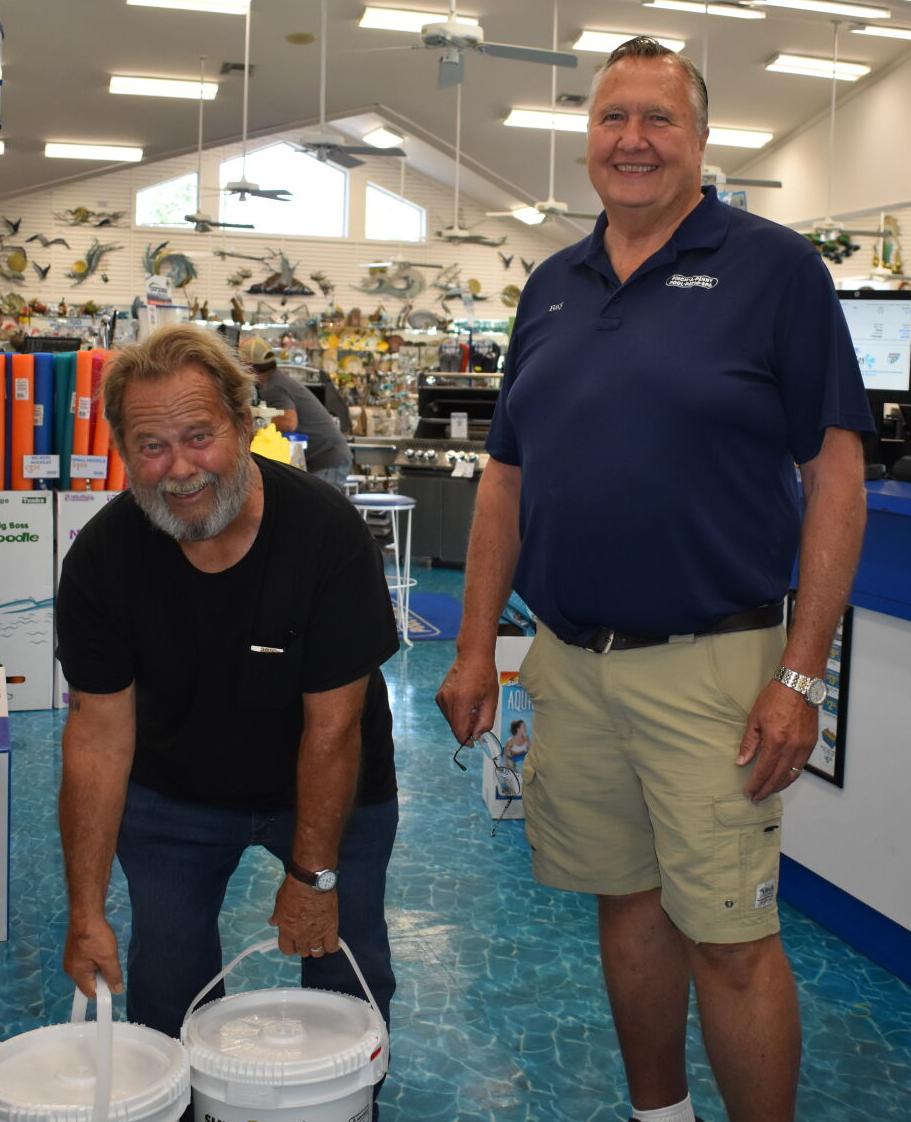 Customer Mike Potts, left, was happy he was able to buy two, 40-pound buckets of chlorine tablets, at a Pinch A Penny. Owner Ray Hoekstra, right, stands with Potts.

Three-inch chlorine tablets used to purify swimming pools, have been in short supply since a fire destroyed Louisiana factory where 40% are made.The company is expected to be up and running next year at greater capacity, but meanwhile U.S. supply has been tight.

Customer Mike Potts, left, was happy he was able to buy two, 40-pound buckets of chlorine tablets, at a Pinch A Penny. Owner Ray Hoekstra, right, stands with Potts.

Despite a nationwide shortage of chlorine tabs, Southwest Florida has plenty of supply and will be OK — provided people don’t hoard like they did with toilet paper, said Ray Hoekstra, owner of Pinch A Penny on Tamiami Trail in Punta Gorda.

Area’s prices have gone up but are well under what other areas are paying, according to local pool service and supply companies.

Hoekstra cautioned that with pools about to be opened for the summer, which begins Memorial Day weekend in northern states, supply could tighten.

After Hurricane Laura struck in August, a Louisiana factory manufacturing 40% of the nation’s chlorine tabs burned to the ground.

The company, BioLab Inc., is expected to resume production next year with 30% increased capacity, according to Ofer Nadel, owner of Isles Pool Service in Punta Gorda.

Nadel said the BioLab plant won’t be up and running until next year.

“Now there are only two till ‘22,” he said, referring to the two factories which continue making the tabs vital to the pool industry.

He said one customer had multiple buckets at home and “just bought two more.”

“You can’t get the Silk tablets at all,” Jackson said, referring to the BioGuard SilkGuard Complete 3-inch tablets which soften the water.

Forty-pound buckets of the SilkGuard tabs were sold out on Amazon.com on Monday.

In Pinch A Penny, customer Mike Potts came in to buy two, 40-pound buckets of Value Chlor tabs. His purchase rang up to $235.38, with tax, and Potts seemed pleased.

There were plenty of Value Chlor buckets stacked up in the store, and on the other side were Suncoast Complete tab buckets, also high and wide.

Hoekstra said Complete brand’s tabs are individually wrapped and its blue specks contain a stain prohibiter, in addition to other benefits.

The cost for two buckets of the higher-quality chlorine tabs cost about $260 on Monday. But he said prices are fluid.

Hoekstra said there is not a liquid chlorine bleach shortage and it shouldn’t be stockpiled.

“It has a shelf life of only six months,” he said.

He said liquid bleach shouldn’t be stored in the garage, because it would degrade further because of the heat.

Nadel said he is bracing for a price increase.

“One supplier told me the next batch could cost two times what it cost them, so it would cost me two times more,” Nadel said.

Since the factory fire last year, his prices per bucket have doubled, but so far no additional costs were passed on to his customers.

He said since his company does more than pool cleaning and maintenance, he was able to absorb the added expense.

One solution, he advised, should prices soar out of control, would be for the pool owner to convert to a saltwater pool.

He said the technology costs $1,000 for the less expensive system, and $2,000 for the higher quality upgrade.

For the conversion, a control panel is installed and non-iodized salt is dumped into a tube, or cylinder containing precious metal plates. The plates then “electrify the salt,” which comes out the other end as chlorine, Nadel said.

He said the salt content is no more than what is in human tears, and the water’s taste is very mild and nothing like sea or ocean saltwater.

Also, ultraviolet lights placed in the pools need only “one half part per million of chlorine,” which significantly reduces the amount of chlorine needed, he added.

But the chlorine tablet shortage is not the only challenge facing the pool industry and consumers.

PVC piping, which is essential in the industry, is also in short supply due to this past year’s freezing weather in Texas, said Jackson.

He said when the power went out in Texas due to severe weather and the ground froze, “there were miles and miles” of damaged PVC pipes.

Nadel concurred, saying pipes and pipe fittings were “cracked and broken all over the place.”

The combination of the hurricane and the freeze has put the pool industry in what may be its worst supply situation its faced.

“While the industry’s been struggling to get tablets, PVC is a big mess,” Jackson said.