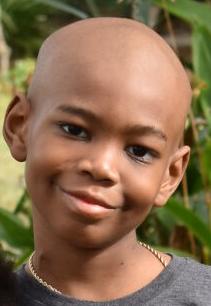 Jakobe (Kobe) Washington, the 8-year-old Punta Gorda boy awaiting a bone marrow transplant match that could save his life, is back in the hospital undergoing a pre-transplant chemotherapy regimen, said Debiann McIntosh, a volunteer for the nonprofit Be The Match Registry.

Meanwhile, a second drive-thru event has been planned in the Tampa Bay area, to bolster Kobe’s odds of finding a donor, she said.

Black patients stand only a 23% chance of finding a match.

It takes about six weeks to determine whether a donor has been found following a cheek swab event. On Christmas Eve, more than 200 people at the Charlotte Sports Park allowed their cheeks to be swabbed and joined the national bone marrow registry in hopes that they would be the match for the boy who loves baseball, Legos and STEM projects. Others registered online, for a total of 460 who could be potential matches for Kobe.

Kobe, a student at Sallie Jones Elementary School, was diagnosed with T-lymphoblastic leukemia in August. After undergoing grueling chemotherapy treatments, doctors told Kobe’s family that his only hope for survival would be having a bone marrow transplant, also known as a stem cell transplant.

Kobe’s parents — Imeria Price and Jordan Washington — were with Kobe on Tuesday at Johns Hopkins All Children’s Hospital in St. Petersburg, where he has been treated.

Mom Imeria is a student earning her nursing degree. On Tuesday, she said that Kobe “is doing OK” and that he is receiving his pre-transplant treatment. To receive a bone marrow transplant, one has to be free of cancer cells. She said that after a month, Kobe might be able to come home to Punta Gorda, but he’d return to the hospital for the second month of chemo, making sure there are no cancer cells left.

Imeria drives each afternoon back down to our area, then when school ends at 9 p.m., she drives back to St. Petersburg. This will continue until Jan. 14. After that, she will finish her studies online, she said.

Kobe, an avid baseball fan, was a right-fielder and pitcher for the Kangaroo Court Baseball Club, a Tampa Bay based travel ball organization. He also played for his local Little League team, so it’s appropriate that the next match event would be held on a field that Kobe loves so much.

Even though an African American donor might prove to be a perfect match for Kobe, there have been cases in which a white donor provided life-saving stem cells to a Black patient, McIntosh said in an earlier interview.

Everyone showing up to provide their DNA via a cheek swab, would be put on the bone marrow national registry. If they are not a match for Kobe, they might be the life-saver for someone else needing this vital treatment.

James Coble, a friend of the family and part of the Kangaroo Court organization, set up a GoFundMe Facebook page for Kobe. To learn more about Kobe, here are links to his GoFundMe page: bit.ly/3pa468z and YouTube video: https://bit.ly/3r8jXq5.