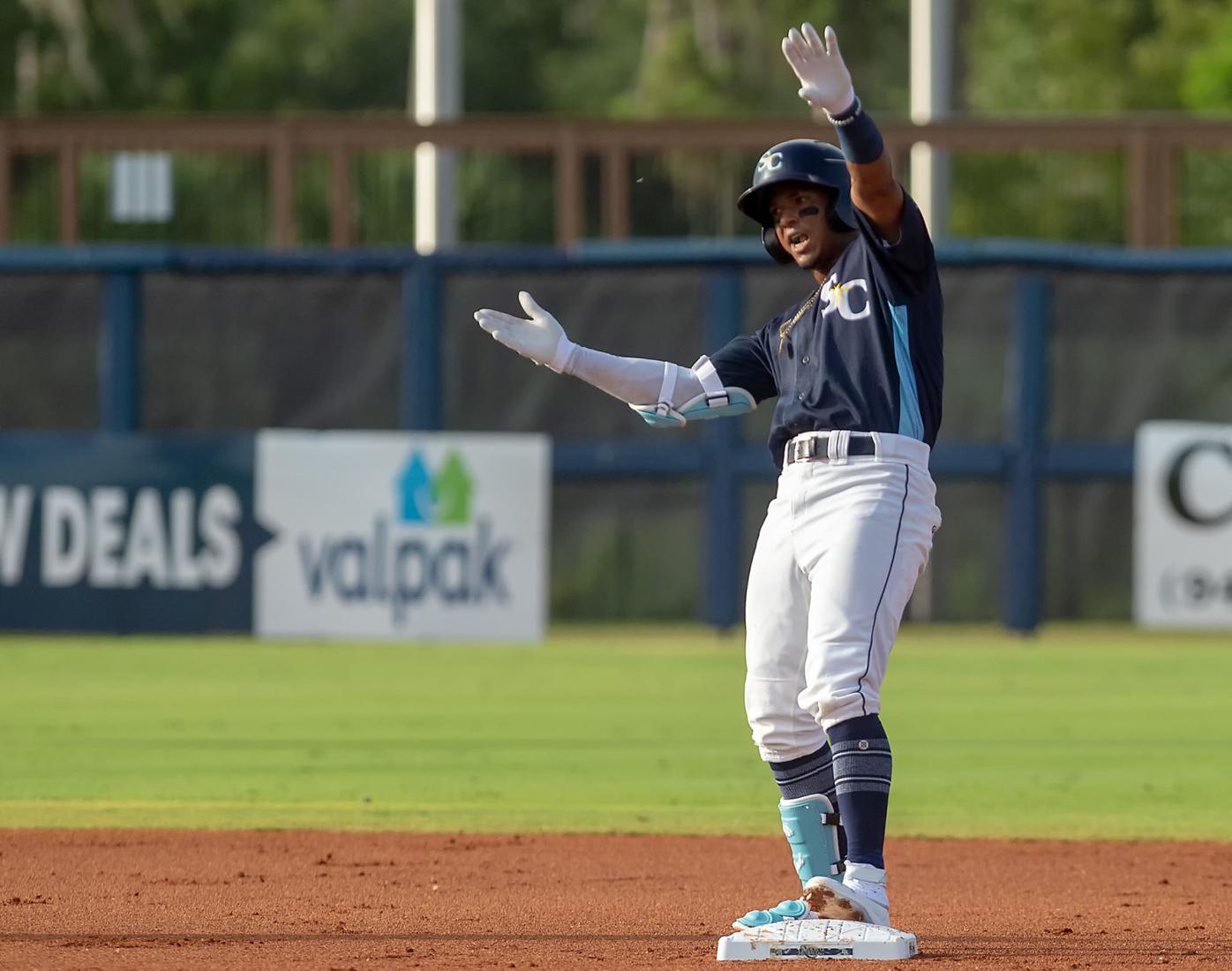 New Charlotte Stone Crabs shortstop and the consensus No. 1 prospect in baseball Wander Franco celebrates his first base hit with the Stone Crabs during Tuesday night’s game at Charlotte Sports Park. 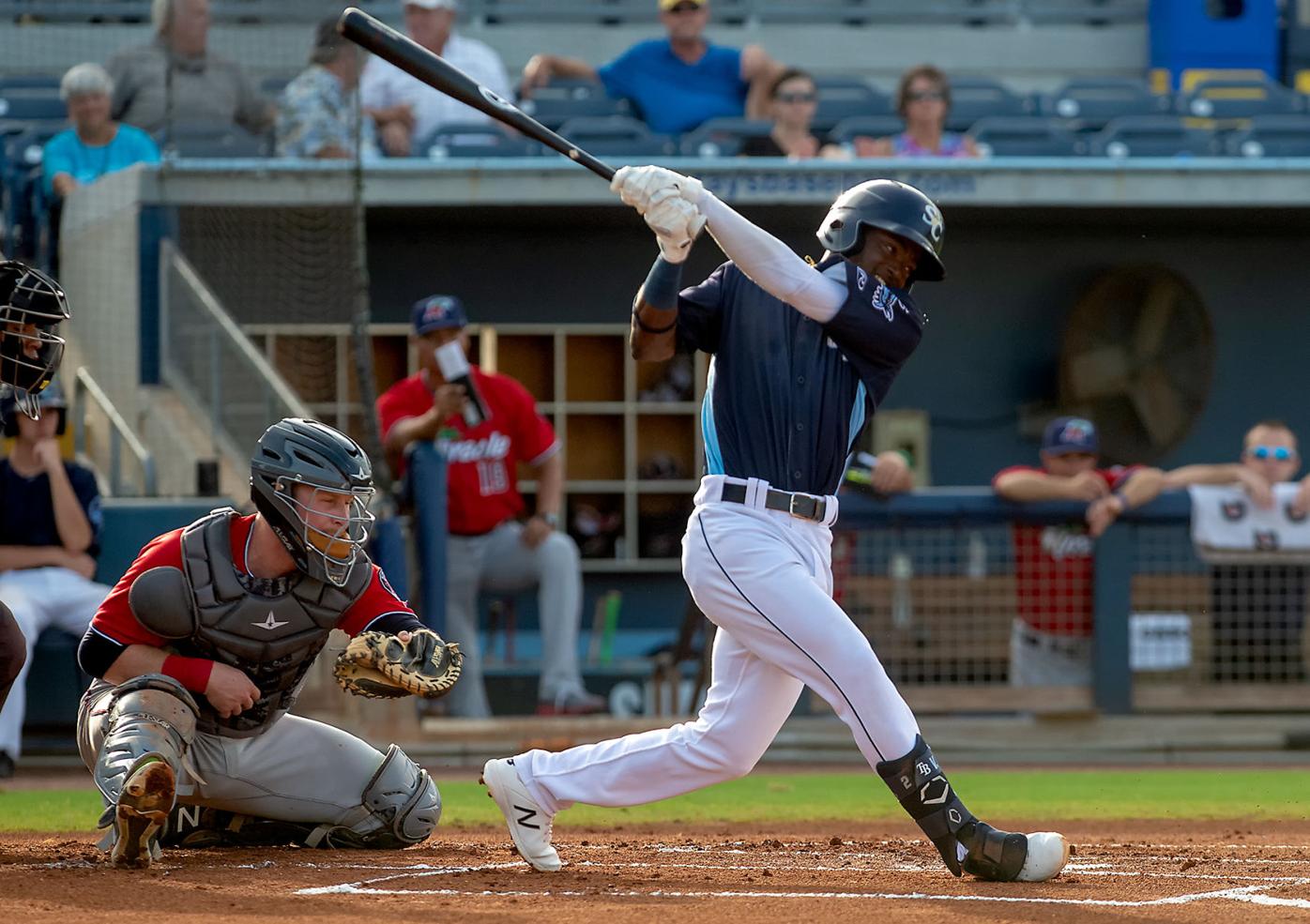 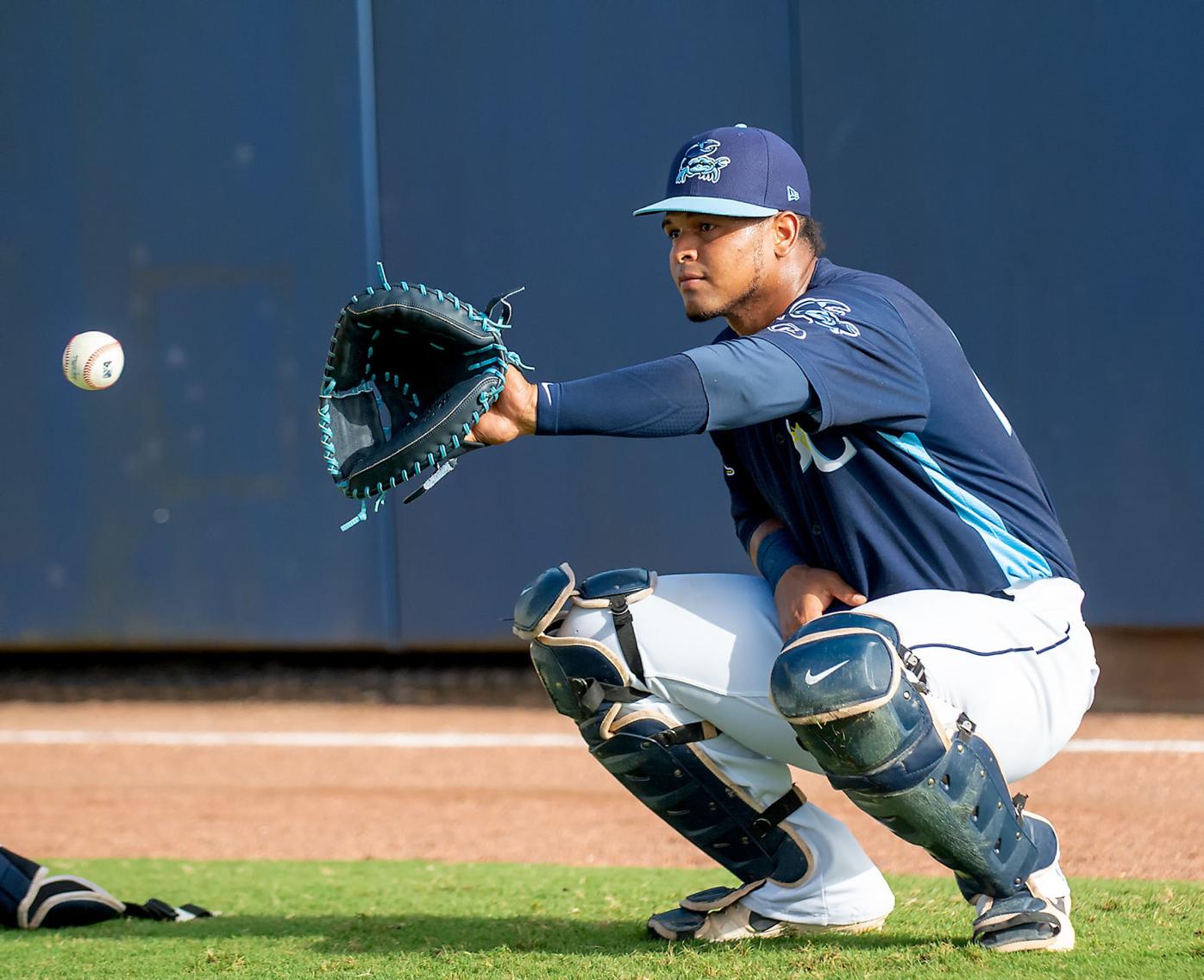 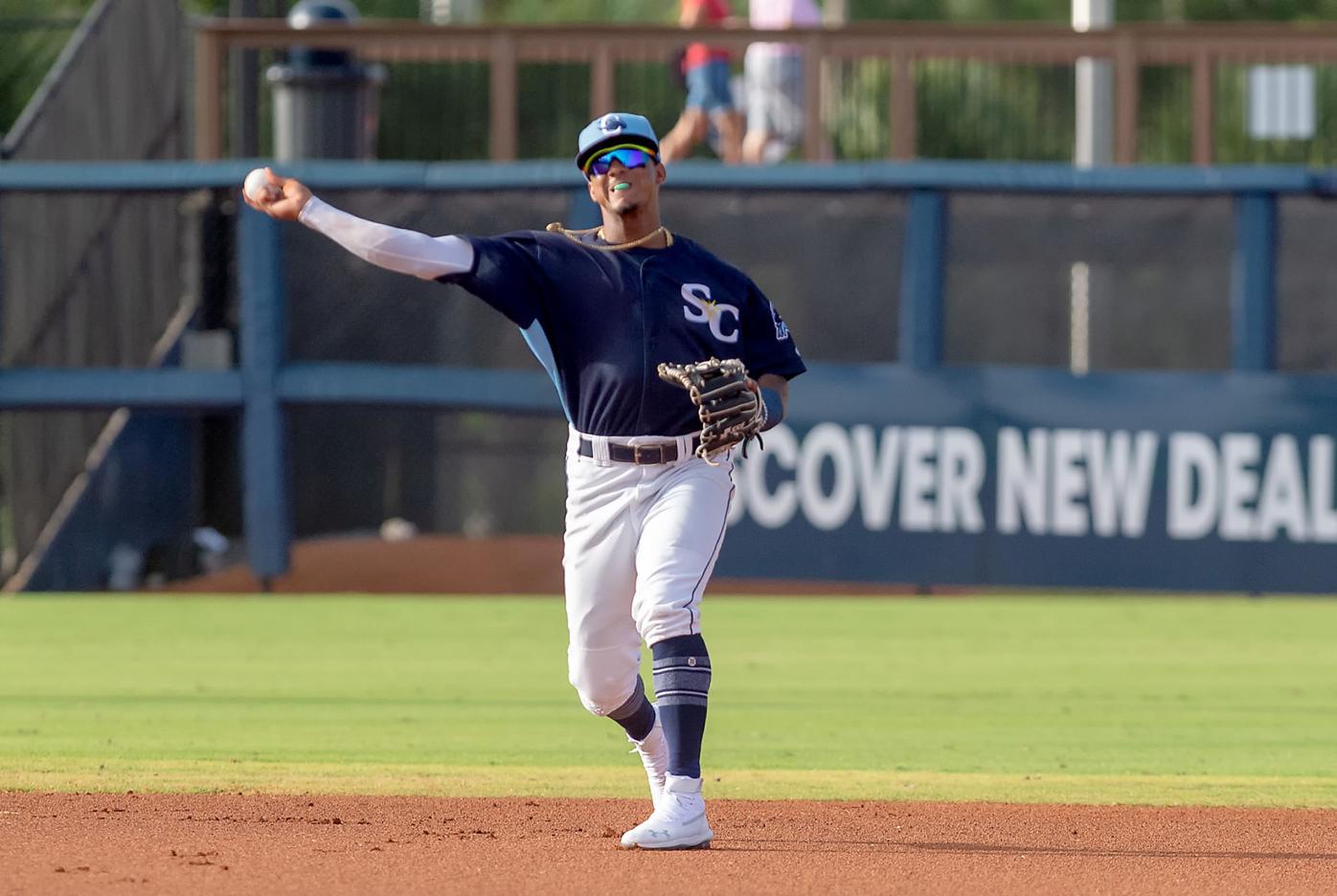 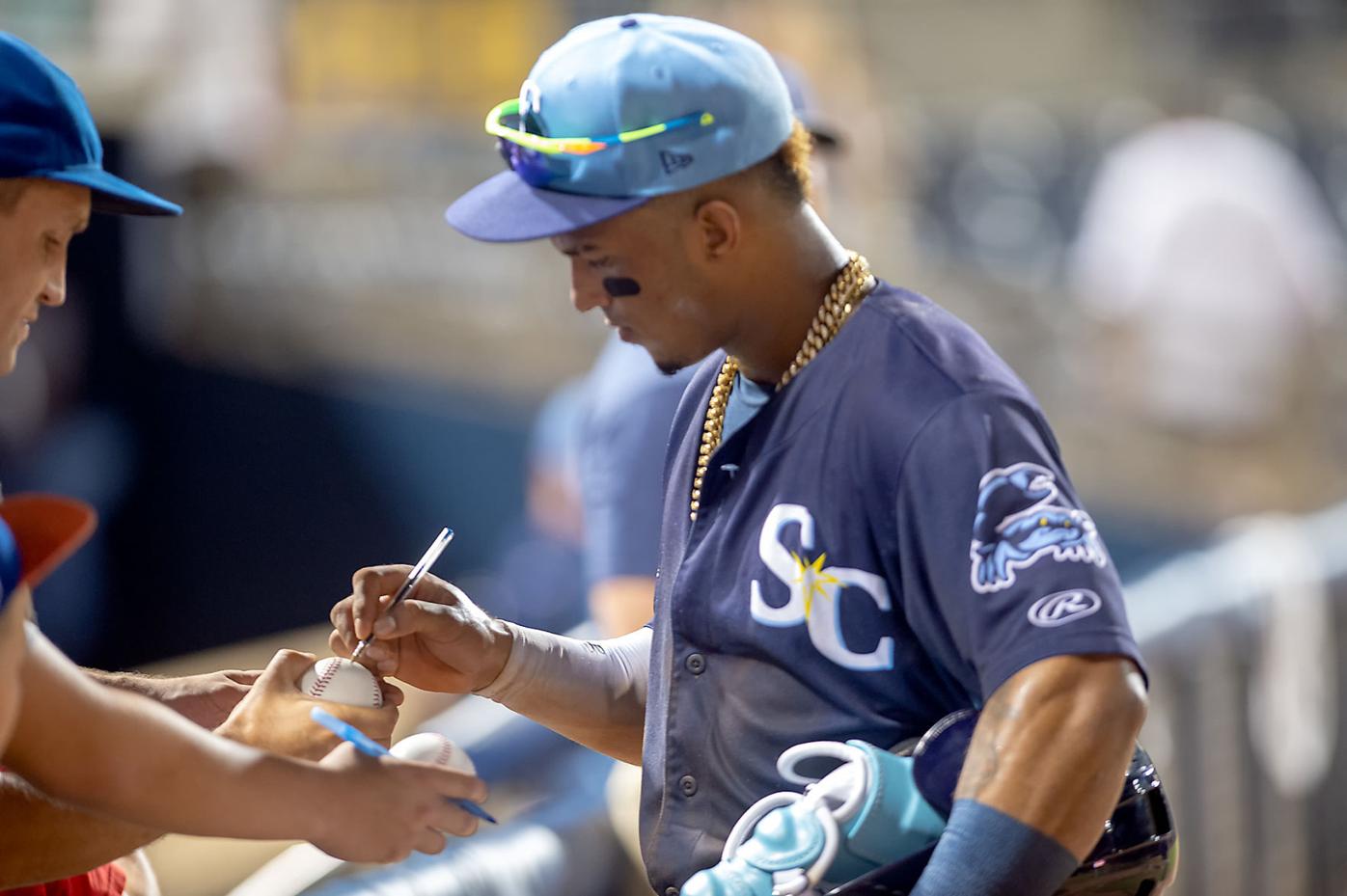 Franco signs autographs for fans after his High-A debut on Tuesday.

Wander Franco had all the markings of baseball’s No. 1 overall prospect when he made his much-anticipated High-A debut for the Stone Crabs Tuesday night.

High socks, all-white spikes and gloves, and a dazzling gold chain hanging from his neck let the Charlotte crowd know this was a special occasion and that the Dominican shortstop was a big deal.

Once he set foot on the field, it hardly took long before he made his presence known in his first at bat against one of Fort Myers’ top pitchers.

In fact, it took two pitches.

Franco got his first action in the top of the first inning, driving on a short chopper before making the throw to first to get the final out. He followed that up by beating a shift in the bottom of the inning that exposed the left half of the infield.

Franco punched a fastball down the third-base line to score Vidal Brujan from second. The run was aided by a fielding error by Miracle left fielder Trevor Larnach.

Franco went 2 for 3 with a walk in his debut and recorded the final out to seal the 2-0 win after a ball dropped in shallow center field with four players converging before Franco picked it up and made the throw to second.

It may not last long, Port Charlotte, but welcome to the Franco show.

“I felt a little pressure, but I was excited,” Franco said via translator and assistant coach Ivan Ochoa. “I’m very proud to get a hit in my first at bat. I’m excited right now and want to continue to do that the rest of the season. But I feel so good right now and feel happy.”

His ascent in High-A has come with much suspense and his arrival now completes a poor man’s Murderer’s Row for the top of the Stone Crabs’ order.

Each player has their own bag of tricks. Hernandez brings the power, Brujan elite speed and contact hitting, and Franco boasts an above average combination of just about everything with few weak spots in his game.

Hernandez is batting .271 with five home runs and 32 RBIs in 53 games. Brujan, who was selected as a Florida State League All-Star, is batting .297 with 11 extra-base hits and 24 stolen bases in 43 games.

“I feel so good because I’m the first hitter in the lineup and Franco is following me,” Brujan said. “It feels good because with Franco behind me, if there’s a man on first, I know he can bring me home. I have a lot of confidence every time.”

But their bond goes far beyond the numbers and has had a far-reaching impact off the field as well.

Brujan and Franco first met back home in the Dominican Republic in 2016. Brujan was fielding some ground balls while Franco was attending a tryout.

Since then, the two have been itching to play alongside each other and have formed a strong relationship that translates onto the field.

Though we’ve only seen a brief flash of the duo’s chemistry in the infield, the future looks bright.

During pregame, the two exchanged choreographed handshakes and prayed together in right field. During the game, the two completed a seamless 4-6-3 double-play to end the eighth inning, evoking plenty of emotion from the 18-year-old shortstop.

In the fifth, the Dominican duo pulled off a successful double steal to put Brujan in scoring position where he would score on a wild pitch.

The play started with Brujan’s instinct and was carried by Franco’s trust in his new teammate.

“The first thing I look for a sign from the manager, looking for the green light,” Brujan said. “I pay attention to the catcher’s sign, looking for a breaking ball. I got my sign and was ready to steal third base.”

“I don’t have to pay attention to anything except for Brujan,” Franco added. “If Brujan goes, I’m going too.”

Before Franco made the 11-hour drive from Bowling Green, Kentucky to Port Charlotte, Hernandez sent multiple texts with tips and words of encouragement in hopes of preparing him for his debut.

“I texted him a few times,” Hernandez said. “We talked about the different levels and I told him that High-A is gonna be good for you so just come here and try to do the best you can and do what you’ve been doing in Bowling Green.

“But I told him this league is different than Bowling Green, but keep working hard and that’s it. Today I just told him to take it easy and go to the field and have fun and play hard.”

The trio of upper-echelon talent could be the future of the Rays organization and a Major League lineup down the road could mirror what the Stone Crabs are boasting now.

“I think they’re gonna bring a lot of energy,” said Ochoa, a Venezuelan native. “Because it’s another Latin guy in the club. They have a good relation on the clubhouse so I think we are gonna have a lot of energy from now on.

“They want to learn. They come almost everyday. I know it’s hard for them, they wanted to be on the bases, want a base hit every time. So we have to keep pushing those guys to get better. I’m gonna keep my eyes on these guys.”

For Franco, it’s all about advancing, something that’s echoed by his teammates. They want to become one of the top trios in the the organization and continue their rise toward the majors.

“My dream was always to play a different level every year,” Franco said. “My goal this year was to play here. When (Bowling Green manager Reinaldo Ruiz) told me I was going to come here to play with the Stone Crabs, I felt so excited. I want to try and enjoy these games right now and try to do the best I can for the team.”