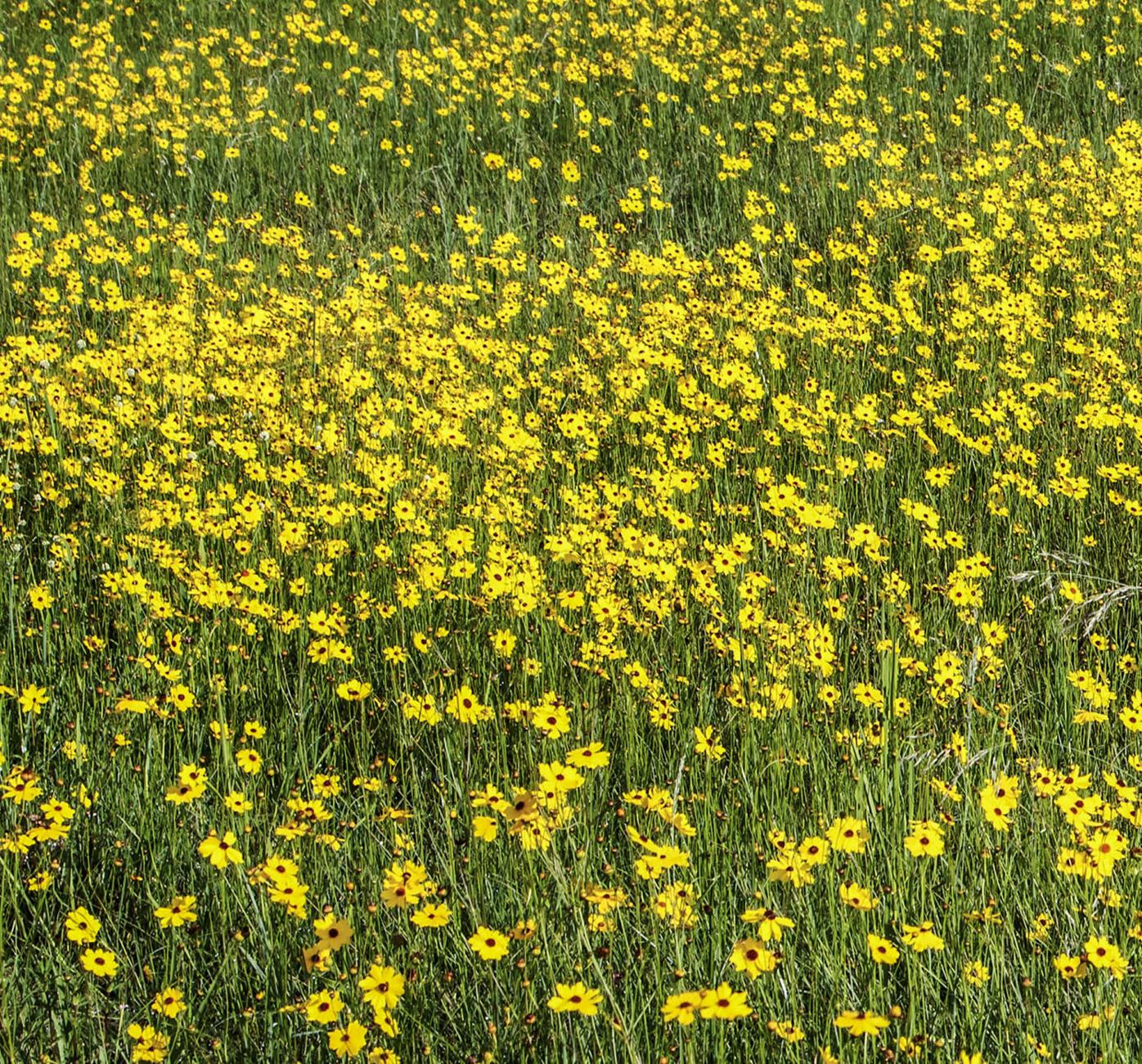 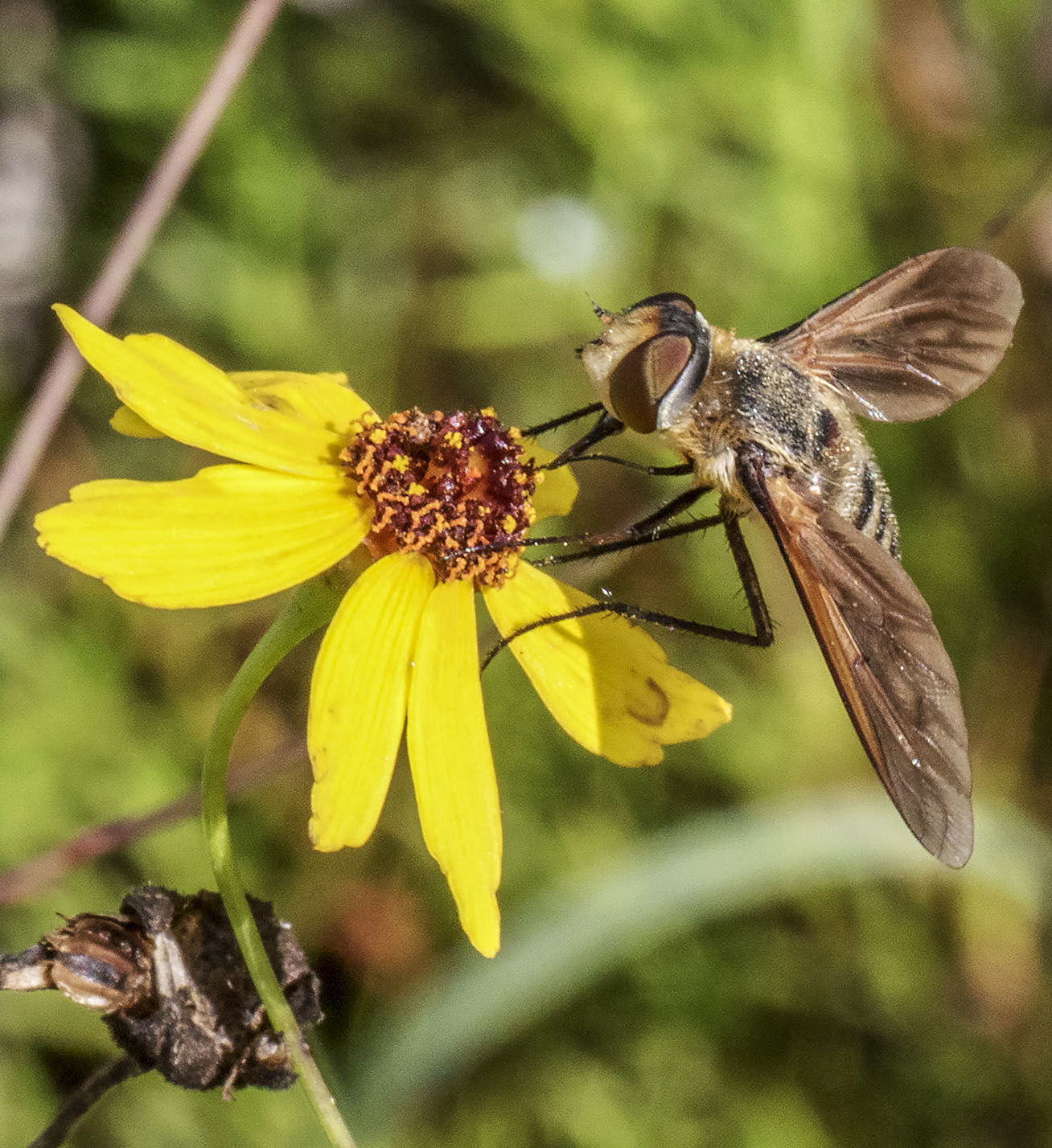 This bee fly is feeding on the nectar or pollen from the tiny flowers of a common tickseed. Note the long tongue. Some bee flies are important pollinators of flowers.

This bee fly is feeding on the nectar or pollen from the tiny flowers of a common tickseed. Note the long tongue. Some bee flies are important pollinators of flowers.

Leavenworth’s tickseed (Coreopsis leavenworthii), also known as common tickseed, is one of the more abundant species in Florida. It is a native annual or short-lived perennial often seen on prairies, pinelands, and along roadside ditches throughout most of the Florida peninsula and parts of the Panhandle.

These plants typically grow to a height of 1 to 2 feet. The thin leaves are 1 to 6 inches in length and are located near the bottom of the flower stem. They are oppositely attached to a slender upright stem. Each branch of the plant terminates with one to several flowers.

As with other members of the aster family, these flowers are of the composite type. The inch-wide flowers usually have eight toothed yellow petals surrounding a brown center. The yellow petals are called ray flowers. The brown center is composed of dozens of small yellow flowers known as disk flowers. Each of these small flowers has petals, stamens and a pistil. Thus, each one of these little flowers can produce a seed. In southern Florida, these flowers can bloom year round.

The flower starts as a spherical bud about a quarter-inch in diameter. The bud opens and the petals extend outward. After pollination, the rays drop off and the fruit assumes nearly the same appearance as it had prior to blooming. The seeds mature about four weeks after the flower withers. The seeds look like and are about the same size as a tick, hence its name.

A wide variety of insects visit these flowers to feed on their pollen or nectar. These include various species of bees, wasps, moths, butterflies, flies and beetles.

How did Coreopsis became the official state wildflower? In the early 1960s, the Florida Department of Transportation embarked on efforts to beautify Florida’s highways with natural wildflowers. With support from the Florida Federation of Garden Clubs, the DOT funded a research project with Florida Atlantic University to produce recommendations for the most promising wildflowers to use. Several varieties of Coreopsis were among the flowers recommended by the University.

Inspired in part by Florida’s highway beautification program, where Coreopsis species were widely used for roadside plantings, the Florida Federation of Garden Clubs initiated a program for adoption of an official state wildflower. In 1991, the Florida legislature passed a law adopting Coreopsis as the official state wildflower. They also passed a law that specified the Department of Motor Vehicles to create a specialty license plate honoring the Coreopsis.

Be sure to take time to walk through your neighborhood and look for the common tickseed, which is now in bloom. All of the photographs accompanying this article were taken by the author in the Deep Creek neighborhood.

Tom Zinneman is a local nature photographer. Contact him at TEZinneman@gmail.com. See more of his photos at ZinnysWorld.com.

Tom Zinneman is a local nature photographer. Contact him at TEZinneman@gmail.com. See more of his photos at ZinnysWorld.com.