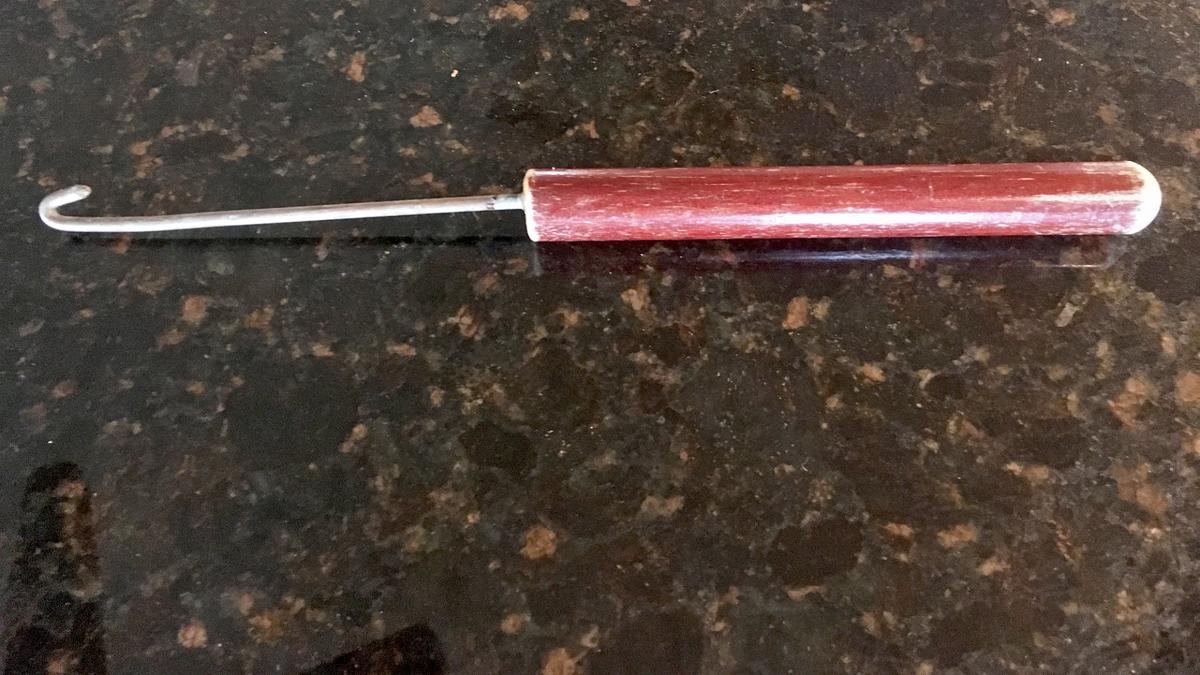 Making your own fish dehooking tool sounds like a hassle when you can buy one for a couple bucks — but if you like to tinker and you like something done right, it’s a project worth trying. 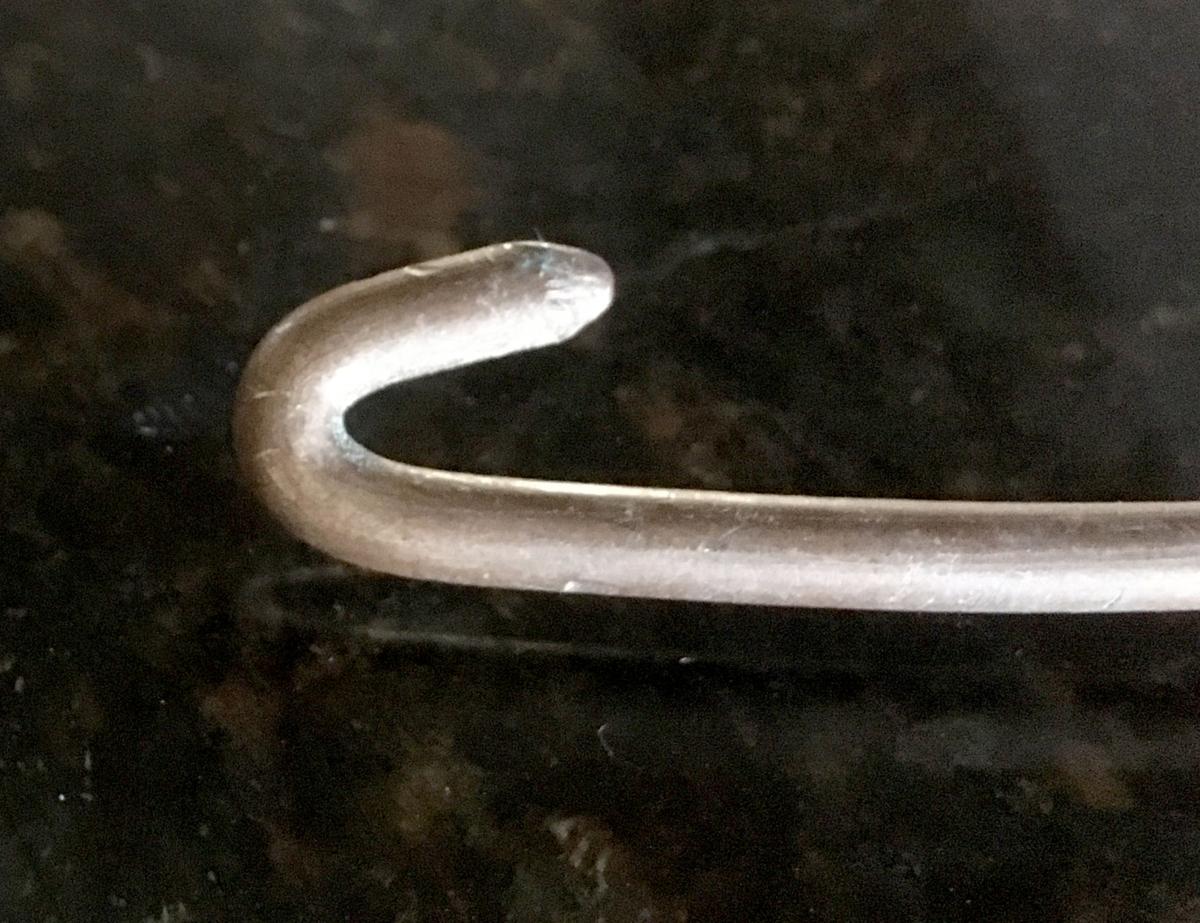 Pay close attention to rounding the tip of the wire.

Making your own fish dehooking tool sounds like a hassle when you can buy one for a couple bucks — but if you like to tinker and you like something done right, it’s a project worth trying.

Pay close attention to rounding the tip of the wire.

There are a ton of gadgets in the fishing world. Retailers call them “accessories,” and their manufacturers are forever unveiling new and exciting accessories designed to do everything from cutting leaders and taming line to cleaning fish. There are so many fishing accessories that if you set out to buy one of each, you’d need a bigger boat just to haul around your accessories. Fortunately, there are accessories to help us store our other accessories.

Some fishing accessories are pretty pricey. Did you know that you can buy a set of titanium fishing pliers for a bit under $400, or an electric fish fillet knife for almost $200? There is no doubt that some of these tools do a great job and will make your fishing experience more enjoyable. But there is also no doubt that some of the gizmos that are being marketed today are more about hype than substance, and many of them are simply a waste of money.

However, that’s definitely not the case with one of my all-time favorite fishing accessories: An inexpensive fish-unhooking tool that’s good for the fish and good for the angler.

In the early days of my chartering career, I would return home from offshore bottom fishing trips with my hands covered in nicks and cuts from handling fish. There were always one or two that got red and infected, and I still have scars from fish-cuts that I received 30 years ago.

Then sometime around 1990, a mate came to work for me who carried a simple fish-unhooking tool that he’d used while working on party fishing boats in New Jersey. It was made from the galvanized steel handle of a five-gallon bucket. He’d shape the steel so there was a small hook and one end and a folded-over handhold on the other, wrapped with duct tape. One bucket handle would make two unhooking tools.

Watching him handle and unhook fish with that simple tool was a revelation. Most of the fish we caught were never touched by human hands. Of course, that saved our tender human hands from all sorts of abuse — but it also meant the fish that we were releasing made it back into the water much fast and with far less handling.

And as a bonus, if a fish ended up on the deck and it needed to be picked up, such as a grouper that was being measured, the hook end of the tool could be slipped under the edge of the gill cover, allowing the fish to be hoisted quickly and easily without damaging the fish. This thing was a win-win-win device and I had to have one for myself. Soon all of our crew were bending and cutting bucket handles. The only problem: Before long, we didn’t have handles on any of our buckets.

In those days, there were few fish-unhooking tools for sale — just those red plastic throat disgorgers that have been around forever and the squeeze-handle hook grabbers with the wee little clamping jaws, neither of which were of any use at all in our type of fishing.

I’m a bit of a tinkerer, so I set out to improve on our homemade bucket-handle dehookers. It turns out that bucket handles are really not quite stiff enough and will bend when unhooking a decent-sized fish. Also, even though they are galvanized, they will rust eventually. Once they get rusty, they’ll abrade your leader above the fish being unhooked.

After a few years of trial-and-error, I settled on the design pictured here. Its construction starts with a trip to the local hardware store to buy some 3/16-inch solid brass rod and a hardwood broom handle. The sweet spot for me is an 8-inch length of broom handle and about 6 inches of brass rod. I shape the rod as shown, drill a small hole in the end of the broom handle, and tap the rod in place, followed by a dab of epoxy on the end of the wooden handle.

Of course nothing is as easy as it looks. Here are a few tips I learned the hard way: Make sure to round the hook end of the rod as shown with a hand file or a grinder before you bend it. Much easier that way. Then make sure that you do the bend slowly. I start by putting the end of the rod in a vise and slowly pushing it over, then finish by laying it on a hard surface and tapping it the rest of the way with a hammer. If you go too quickly, the brass will get hot and fracture.

And here’s an important point: Take your hammer and pound on the last inch of straight end of the rod to flatten it out a little before you drive it into the broom handle. Yes, it will still drive into that round hole, and it will be much less likely to spin in the broom handle or to pull out.

There are a number of commercially made fish unhooking devices out there, some of which are similar to my homemade version. But I like this one better than any of the store-boughts that I’ve tried. Maybe it’s my ego at work, but I prefer the straight handle of this one over the offsets on most of the commercial models.

Some people don’t like to use this type of unhooking device. There are some situations where it simply doesn’t work, especially when unhooking fish that are heavy in comparison to the leader weight. And some hard-mouthed fish such as sheepshead will not unhook easily no matter what tools you use. But if you are unhooking a fish that you can comfortably lift by the leader, this device might be worth trying.

Capt. Ralph Allen runs the King Fisher Fleet of sightseeing and fishing charter boats located at Fishermen’s Village in Punta Gorda. He is an award-winning outdoor writer and photographer, and is a past president of the Florida Outdoor Writers Association. Contact him at 941-639-2628 or Captain@KingFisherFleet.com.

Capt. Ralph Allen runs the King Fisher Fleet of sightseeing and fishing charter boats located at Fishermen’s Village in Punta Gorda. He is an award-winning outdoor writer and photographer, and is a past president of the Florida Outdoor Writers Association. Contact him at 941-639-2628 or Captain@KingFisherFleet.com.