TOP: A snail kite flying with a huge non-native apple snail. If they don’t have a good grip, they drop the snail. 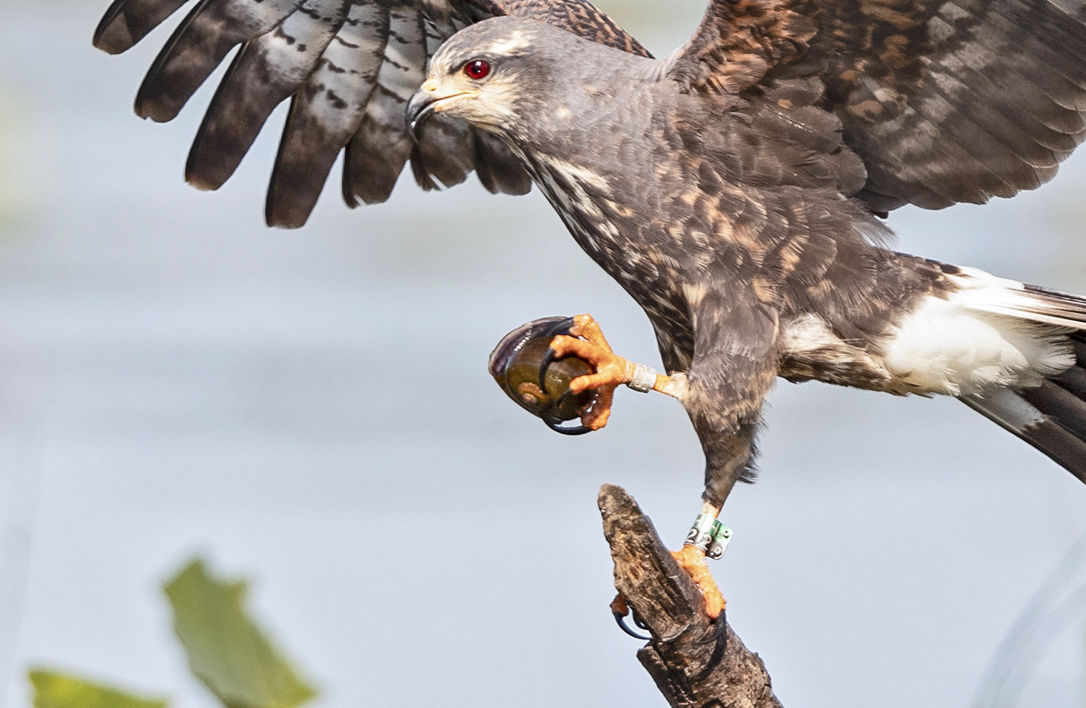 A banded snail kite landing with a snail. The bands help biologists identify individual birds, which is otherwise challenging.

This snail kite is identifiable as male by his bright crimson red eyes.

TOP: A snail kite flying with a huge non-native apple snail. If they don’t have a good grip, they drop the snail.

A banded snail kite landing with a snail. The bands help biologists identify individual birds, which is otherwise challenging.

This snail kite is identifiable as male by his bright crimson red eyes.

Florida is the only state in the United States that hosts snail kites, although they are also found in South and Central America. The snail kite, classified as a federally endangered species, used to be frequently seen in the marshes around Lake Okeechobee in the Everglades.

Loss of wetlands changed that. Lake levels have been raised in recent decades to irrigate farms. When marshes become flooded with water, kites can’t find snails.

In 2004, when Florida had 500 breeding pairs of snail kites, island apple snails (giant apple snails from South America) were carried into Florida. This invasive apple snail is up to five times larger than the Florida apple snail and has displaced our native apple snails in many areas. Initially, the snail kites couldn’t grasp the big adult snails because their beaks and feet were too small.

At first, scientists thought the birds picked up only baby snails, but later found that birds were getting bigger and so were their beaks. It’s long been believed that evolution takes many, many years. By adapting within a decade, snail kites are challenging this assumption. Birds may be able to evolve changes in their environment over just a few years (Cattau, Fletcher Jr., Kimball, et al). Contrary to expectations, the population of snail kites has increased to more than 2,000.

The kites still need to hold these oversized snails against something in order to extract the meat. However, because there is more meat in the larger invasive snails, kites need to snatch fewer of them.

The increase in snail kites is good news for nature and nature lovers. Overall, our birds are in trouble. A study published in Science last summer shows that our birds are vanishing (Pennisi, 2019). Over the past 49 years, nearly one third (about 3 billion birds) have disappeared.

Of those, 69 million birds have died due to pesticides, which may harm them directly as well as kill insects which are the food source for some birds. Grassland species lost 717 million birds, primarily due to agriculture and development. Shorebirds are down more than 37 percent.

The snail kite seems to be an exception for now. However, snail kites move frequently across the Everglades and Lake Kissimmee, so managing the water and decreasing water pollution from pesticide runoff is vital to sustaining the population of these endangered birds. The fate of the Everglades and of the wild critters that populate this world heritage site is in our hands. We must preserve their habitat.