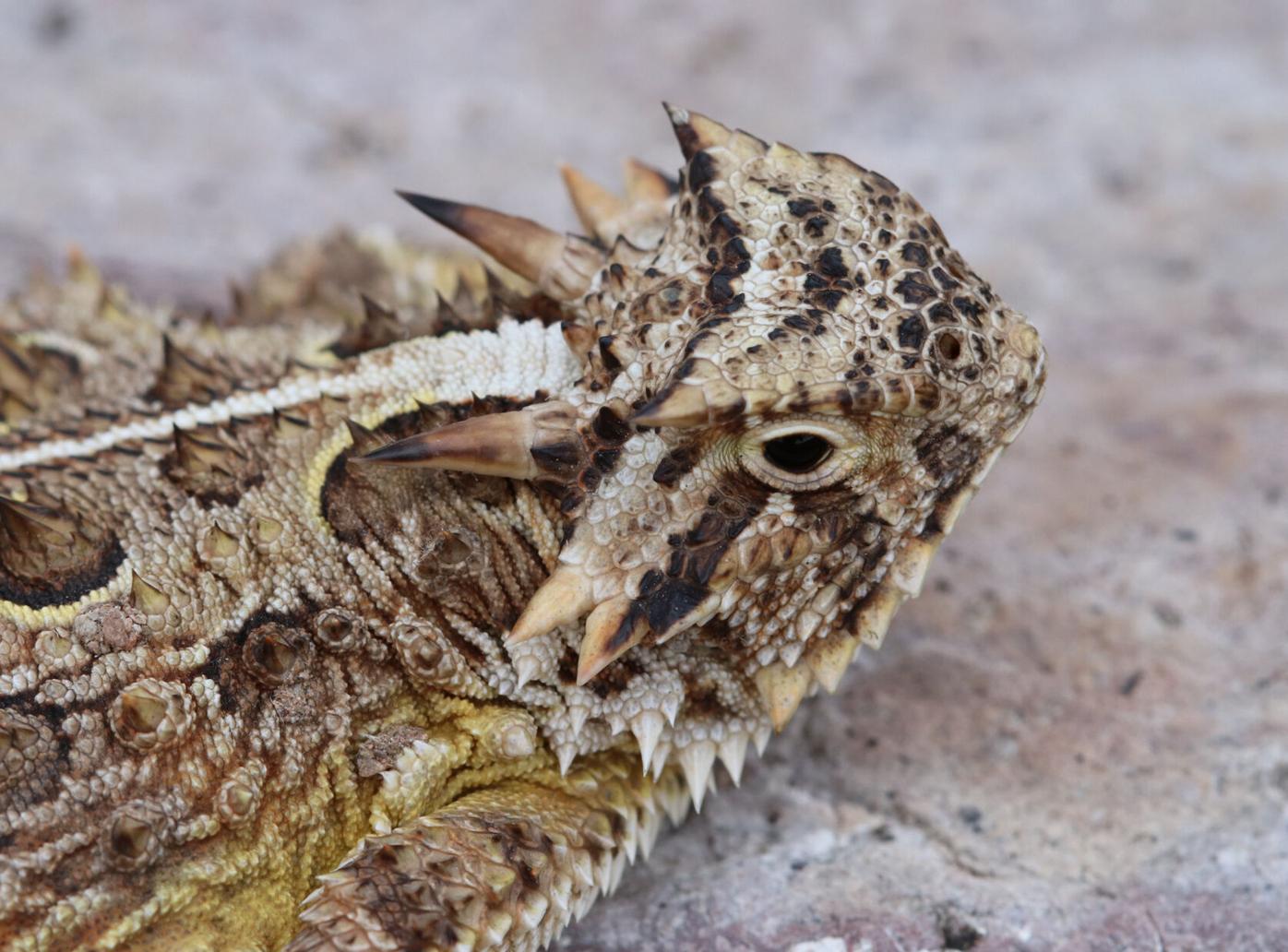 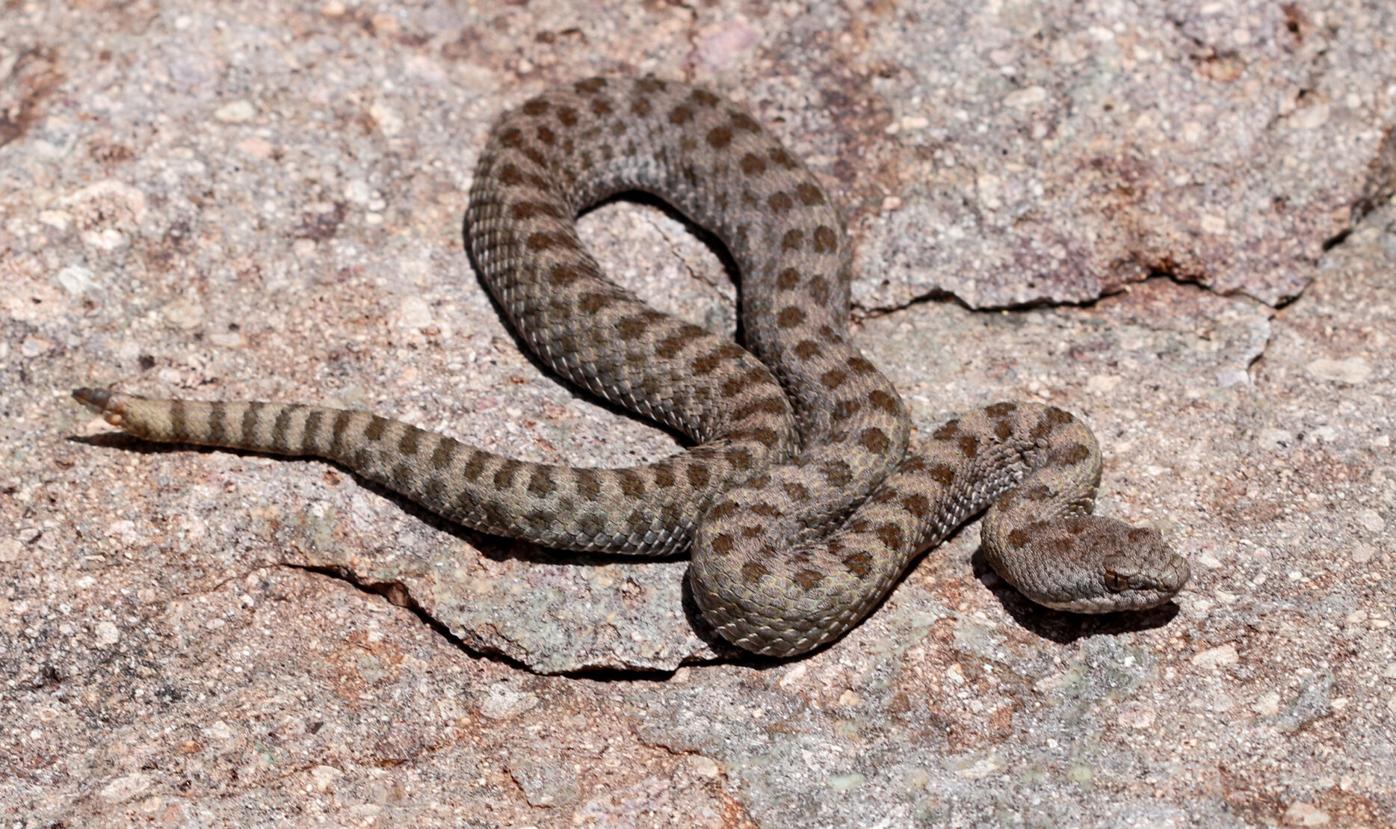 A twin-spotted rattlesnake. These animals are small, only a bit larger than our local pygmy rattlesnakes. 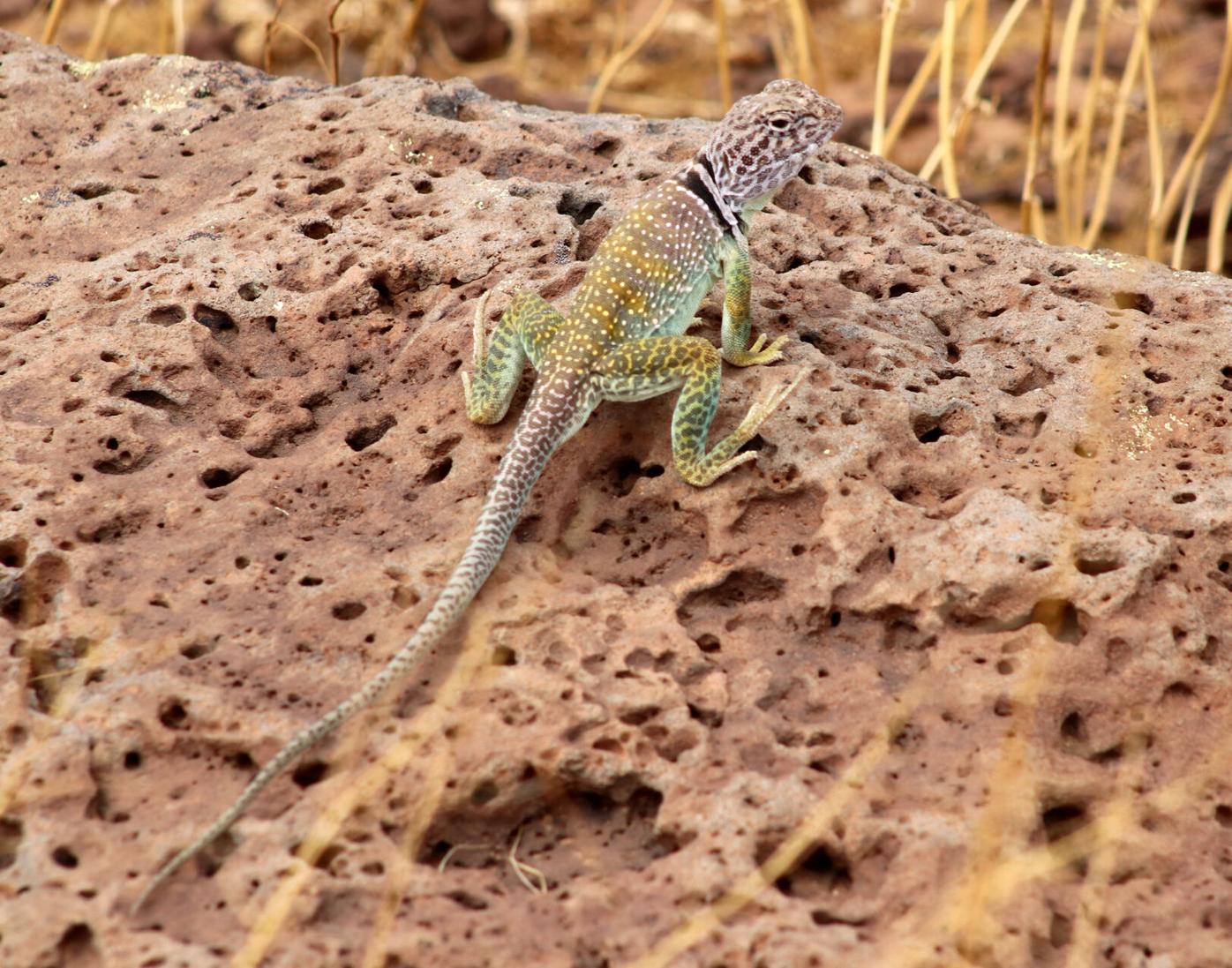 With lots of sunshine to warm them, desert lizards can often move with shocking speed. Getting this close to a collared lizard takes some stalking skill. 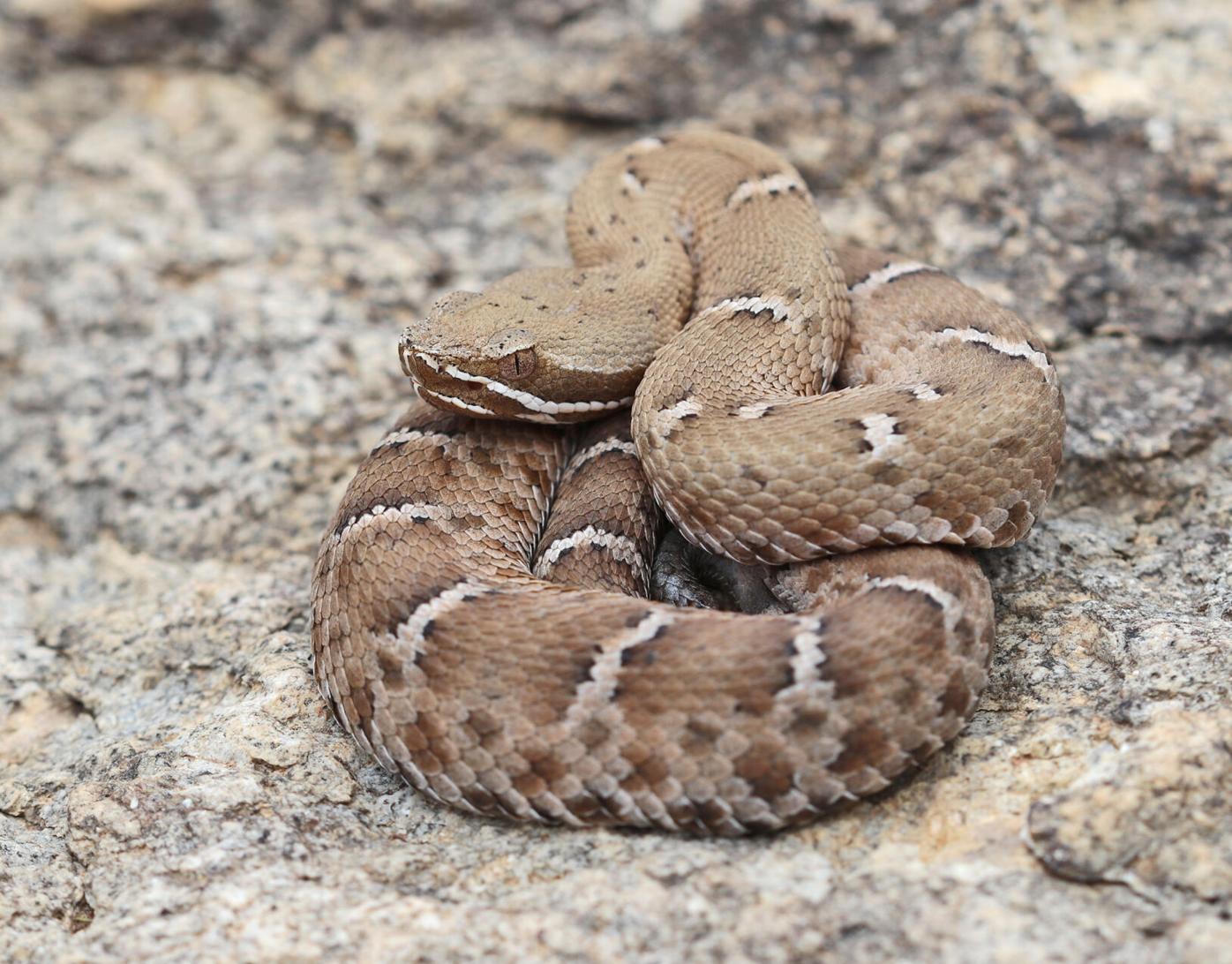 This ridgenose rattlesnake looks big in the photo, but it’s a tiny critter only a few inches long. 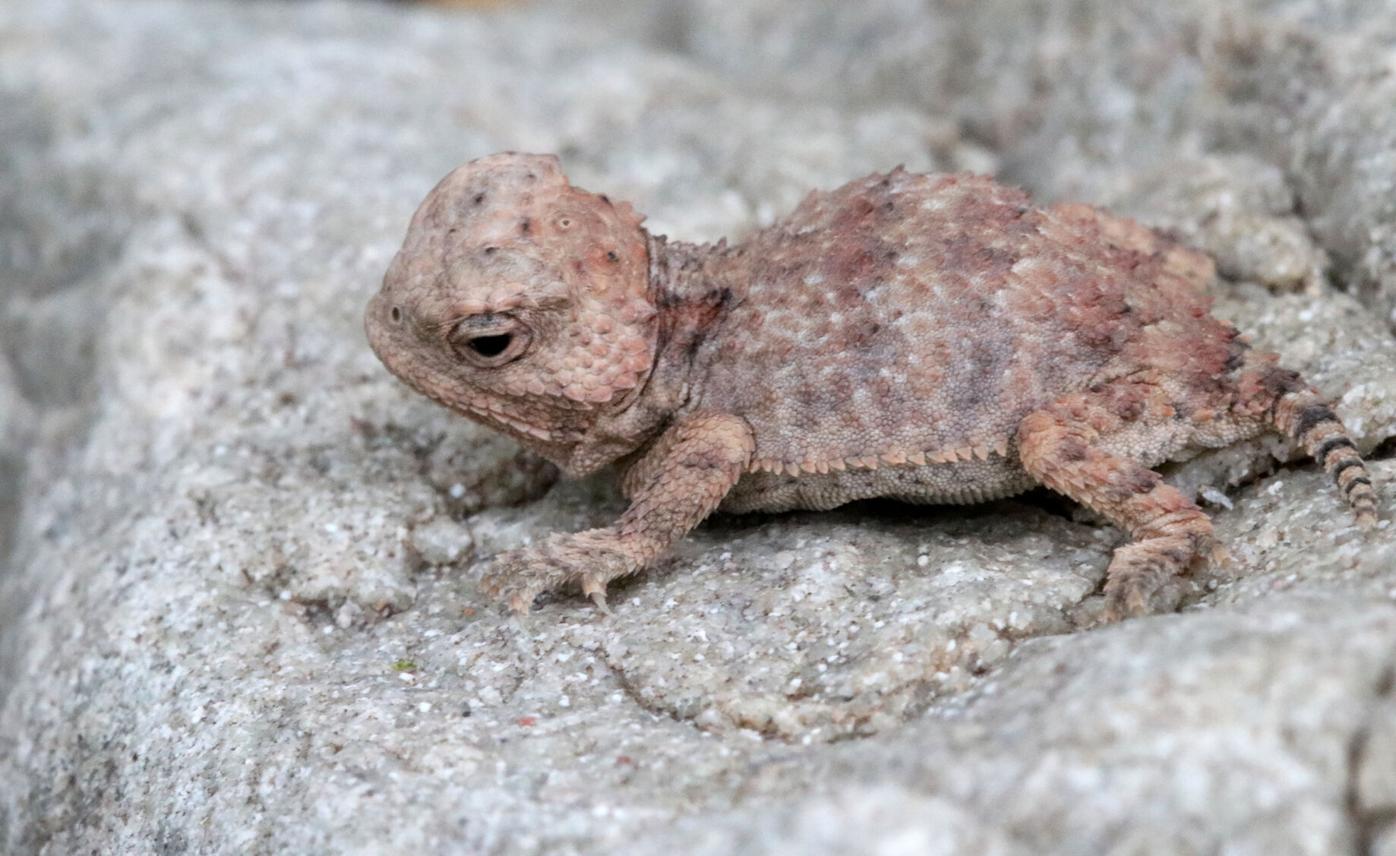 What’s cuter than a hatchling horned lizard? Nothing — nothing at all. 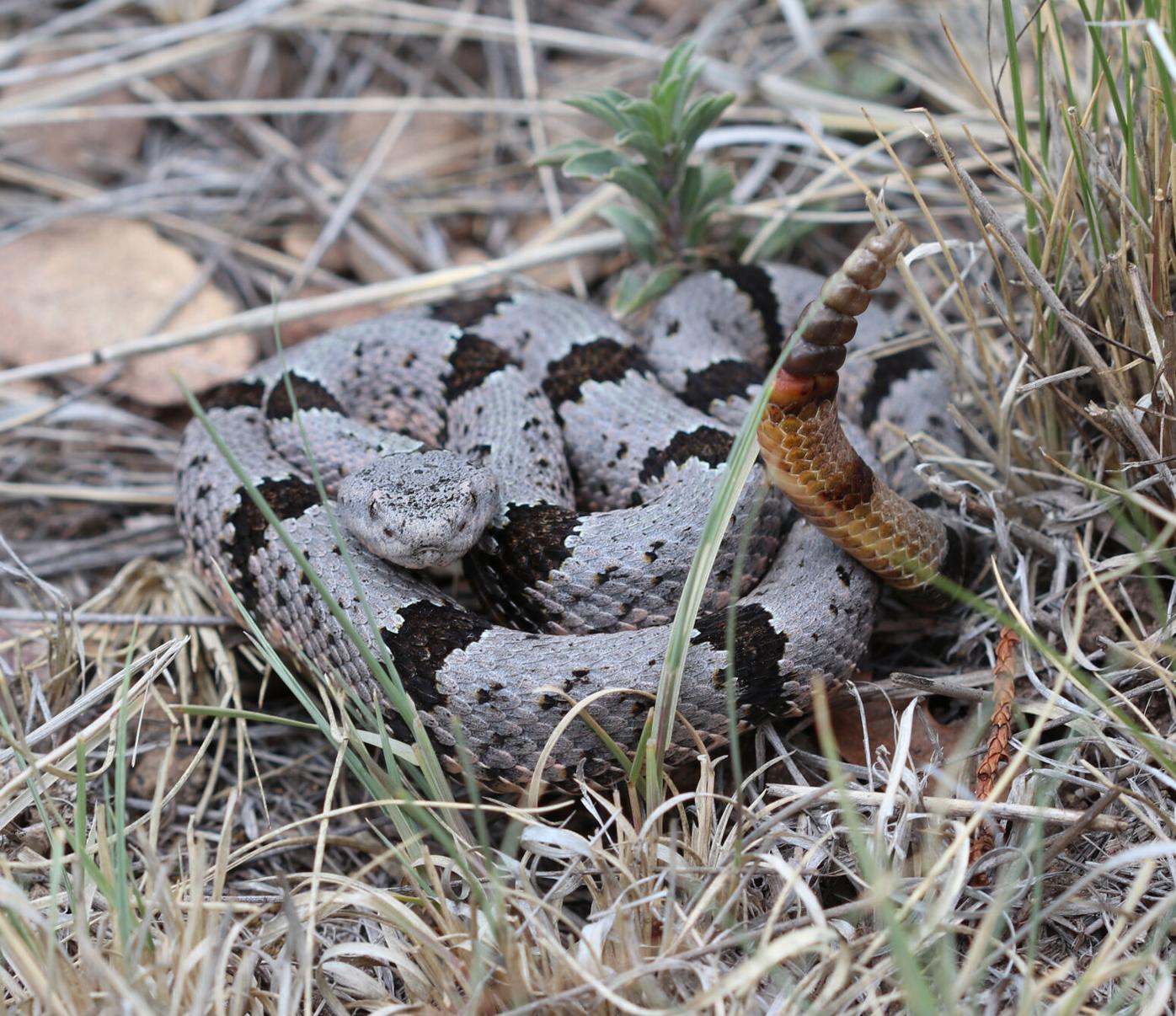 The striking black-and-silver pattern of the rock rattlesnake makes it a gorgeous animal. 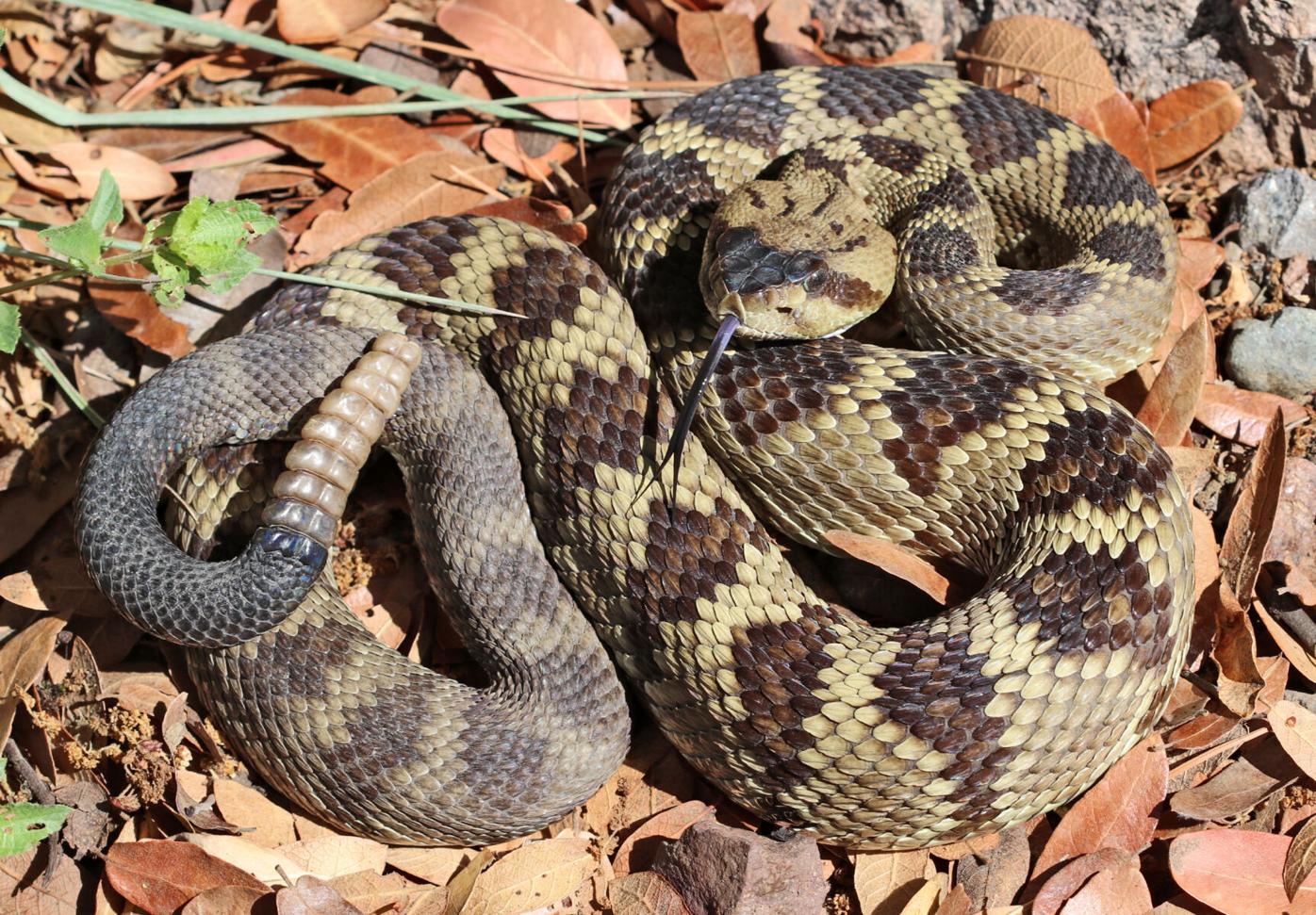 This Arizona black-tailed rattlesnake is in a defensive position, which is a warning to not come any closer.

A twin-spotted rattlesnake. These animals are small, only a bit larger than our local pygmy rattlesnakes.

With lots of sunshine to warm them, desert lizards can often move with shocking speed. Getting this close to a collared lizard takes some stalking skill.

This ridgenose rattlesnake looks big in the photo, but it’s a tiny critter only a few inches long.

What’s cuter than a hatchling horned lizard? Nothing — nothing at all.

The striking black-and-silver pattern of the rock rattlesnake makes it a gorgeous animal.

This Arizona black-tailed rattlesnake is in a defensive position, which is a warning to not come any closer.

This week’s column is a little bit of a departure from what I usually write about, and I promise I’ll go back to fishing in the next column. But I have other interests too, and herping — going out to search for reptiles — is a big one. So I got special permission (thanks, Mr. Editor!) to do a column about snake hunting in Arizona.

I grew up herping the desert. From the time I was about 5 years old, I was fascinated with snakes and catching them. I don’t necessarily recommend letting your 5-year-old go out and play with snakes on their own, but hey — I was a snake-crazy kid and it would have been hard to stop me.

Herping is still a passion for me, and it’s an activity I participate in as often as I can (heck, I was out in the Everglades just last week). But the chance to go back out to the deserts of my youth is a rare treat, so when the opportunity came up in July, I had to go do it.

July is the monsoon season in Arizona. That’s when the rains come and bring the desert to life. Arizona desert is not anything like what most people think. There are two popular conceptions of deserts: Towering sand dunes with occasional scattered oases, or the Southwest as seen in western films.

It’s neither of those things. Where we went, we saw all sort of different habitats, from mesquite shrubbery to grassy plains to dry arroyos. Yes, there were some cactuses (or cacti, if you prefer), but not nearly so many as you might assume, but there was very little sand. The desert is a wild and beautiful place, with more color and more living things than you’ve been led to expect.

Now, I know a lot of you aren’t going to understand the appeal of going out to look for snakes — especially since a lot of the species we really wanted to see are venomous. Most people try hard to avoid close encounters with serpents, and here we are trying to get up in their business.

To me, herping is a lot like fishing. You go out with a plan in place, having researched your options for where to go and which techniques to use. In fishing, you might decide between drifting the flats or anchoring on a reef. In herping, you’re choosing whether to cruise from a vehicle or walk along through habitat.

You probably have target species in mind, and you hone your method to increase your chances of encountering them. If you want snook, you look in snooky areas. If you’d rather catch a tarpon, you hunt them where you expect them to be. Snakes are the same way. Black-tailed rattlesnakes and twin-spotted rattlesnakes are similar animals, but they have very different habits and habitats. You could see them side by side, but it’s not exactly likely.

Figuring out where to go and when to go there is a challenge for anglers and herpers alike. How we choose those spots has changed a lot over the years. A generation ago, snake hunters had to read books to determine where to hunt. If you were really lucky, you’d get to talk to somebody who had been there the year before.

Now, the internet makes possible the rapid exchange of information. You have to wade through a lot of garbage to get to the solid intel, but it’s out there. Whether you’re fishing or herping, you can learn a lot from social media groups over the course of a few hours — info that would have taken weeks or months to collect back in the day.

On our trip, we used a combination of techniques because we were looking for multiple different species. We also put a lot of miles on a rental car — about 3,000 miles over the course of a week. Just like in fishing, sometimes you have to travel a bit to get to where the action is the best.

Sometimes fishermen have a tendency to have overly high expectations. We want to go out and catch a 200-pound tarpon, a 70-pound cobia, and a 30-pound snook. It’s possible, but those are all lifetime fish. To get them all in one trip is — well, let’s just call it unlikely.

Herpers are the same way. As we were discussing plans for our Arizona trip, the list of what we hoped to find kept getting longer and more improbable. It ended up with three that were the real targets: Banded rock rattlesnake, twin-spotted rattlesnake, and ridgenose rattlesnake. To put the absurdity of this list in perspective, there are people who have herped Arizona their whole lives and still haven’t found all of these animals.

We were also on the lookout for Arizona black rattlesnakes, which are a reasonably common but highly variable species. Blacks found in one mountain range look totally different from those found on the other side of the valley, and we wanted to find some pretty ones.

So, here’s the shocker: We actually did see all of those species, and a whole bunch more. I don’t know what sacrifices the guys I was herping with had made to the snake gods, and I don’t want to know. But whatever it was, it worked. We had a heck of a time.

I’m happy that we found what we were looking for — its great to check all those boxes off the list. But just like a fishing trip, even if we had come away with just a few of the animals we’d already seen, I still would have had a good time.

I don’t expect most of you to be any more keen on the idea of going herping than you were 10 minutes ago. But I hope you understand a little better why I do it, and I hope all the snake photos don’t give you the heebie-jeebies. Maybe you’ll even think they’re kind of neat, like I do.

Robert Lugiewicz is the manager of Fishin’ Frank’s Bait & Tackle and a co-host of Radio WaterLine every Saturday from 7 to 9 a.m. on KIX 92.9 FM. Call 941-625-3888 for more information about the shop or for local fishing tips, or visit them online at FishinFranks.com.

Robert Lugiewicz is the manager of Fishin’ Frank’s Bait & Tackle and a co-host of Radio WaterLine every Saturday from 7 to 9 a.m. on KIX 92.9 FM. Call 941-625-3888 for more information about the shop or for local fishing tips, or visit them online at FishinFranks.com.