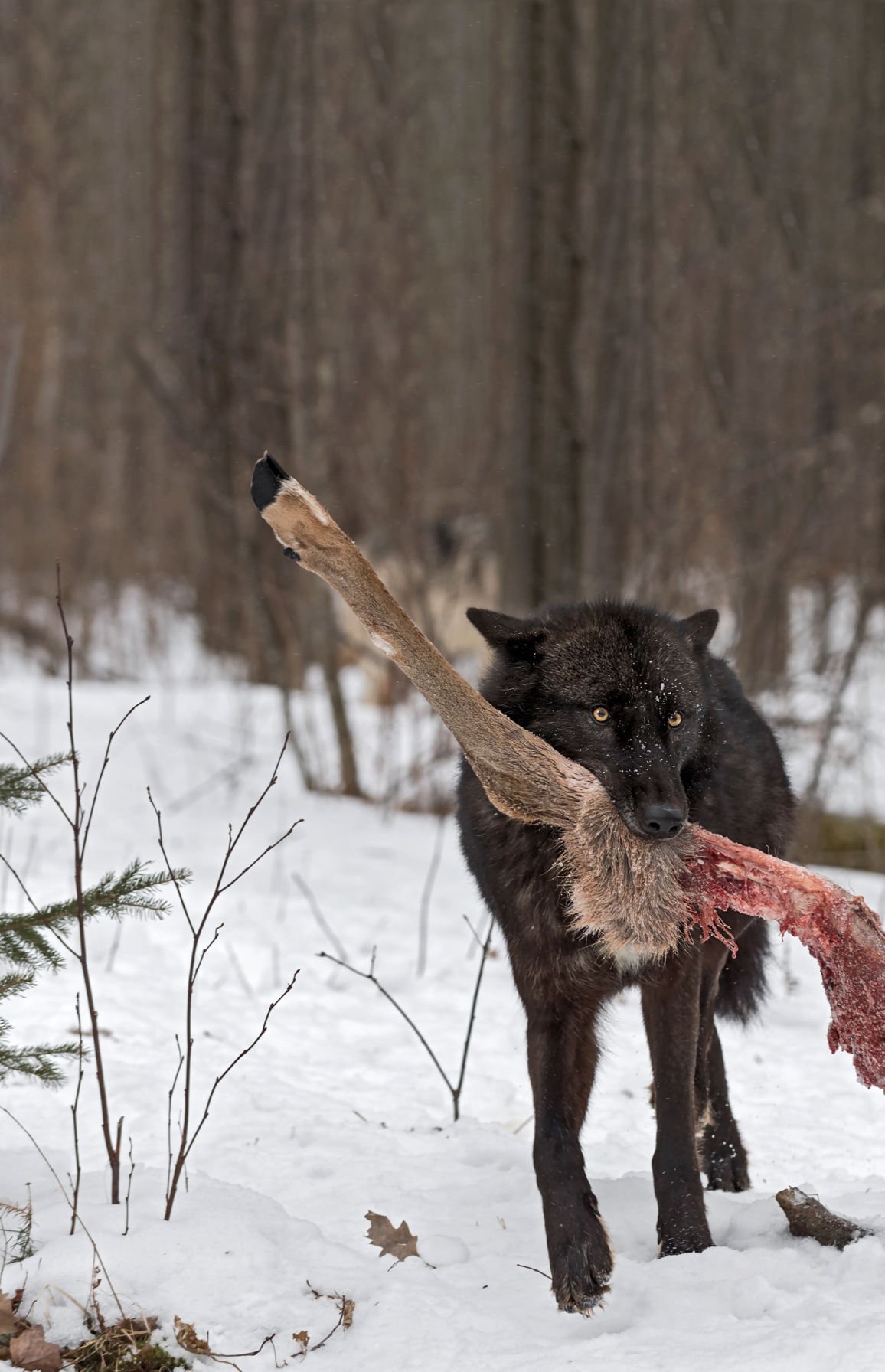 Gray wolves (this one happens to be black, but it's a gray wolf nonetheless) are one of the world's most misunderstood and persecuted predators. 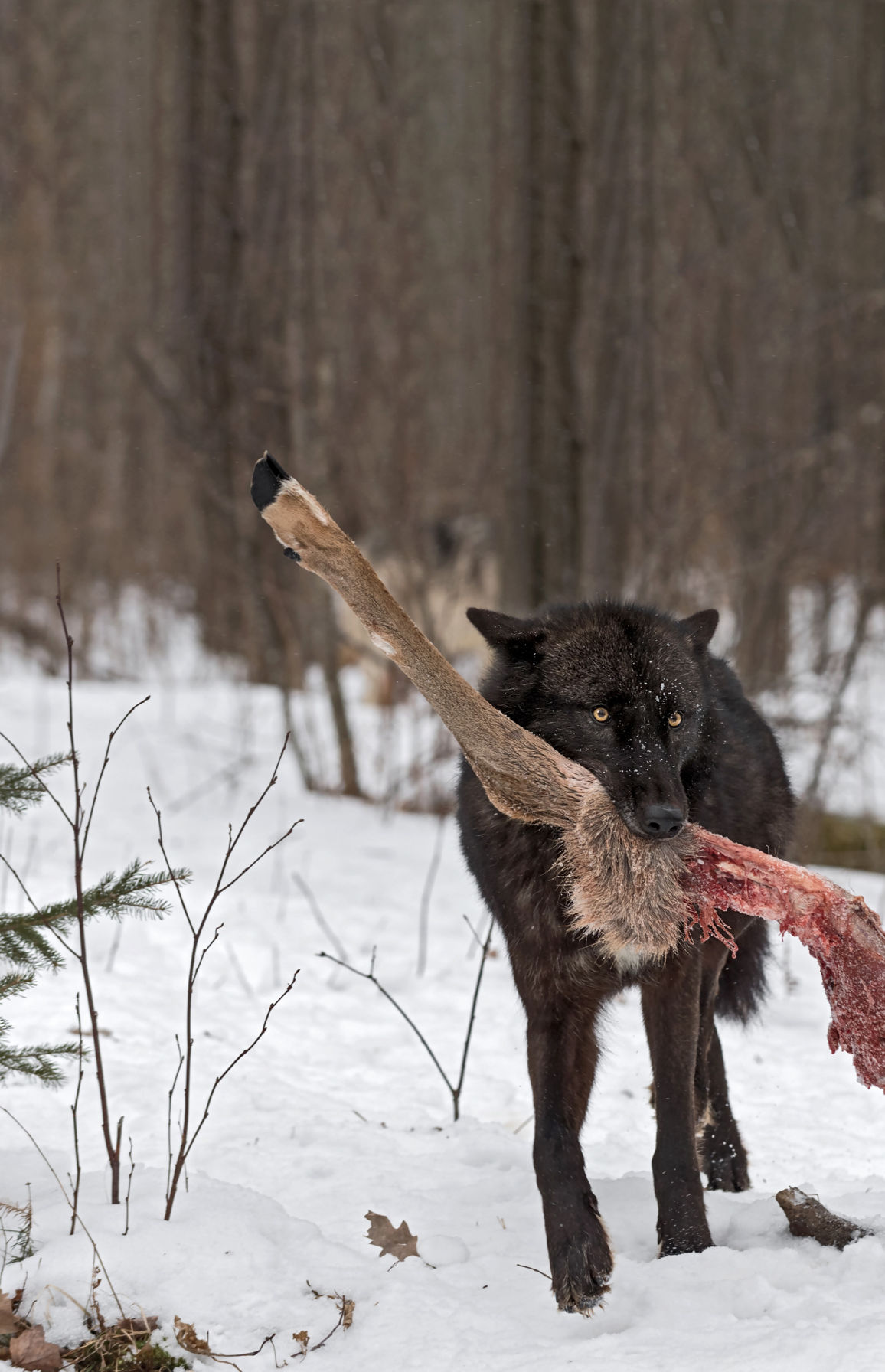 Gray wolves (this one happens to be black, but it’s a gray wolf nonetheless) are one of the world’s most misunderstood and persecuted predators.

Gray wolves (this one happens to be black, but it's a gray wolf nonetheless) are one of the world's most misunderstood and persecuted predators.

Gray wolves (this one happens to be black, but it’s a gray wolf nonetheless) are one of the world’s most misunderstood and persecuted predators.

We’ve always had a contentious relationship with wild predators. Our ancestors on the African plains succeeded in developing suitable defenses with spears and fire. But since those defenses were best mounted by groups of adults, carnivores were still feared as they sometimes killed someone who was alone — and children were easy prey.

Then we invented agriculture and domesticated some of the grazers. Suddenly, it wasn’t just an occasional wanderer or wayward kid getting eaten — it was our livestock, which the whole community depended on for survival.

Therefore, it’s only natural that we would persecute large meat-eating animals. But it’s an attitude that has mostly outlived its usefulness. I know my own farming ancestors are rolling in their graves at that notion. All the same, it needs to stop.

Is this some hippie idea? Peace and love are all we need? Maybe you think I’ve been watching too much CNN and it turned me liberal. (You can catch liberalism, right?) Throw insults if it makes you feel better. But here’s the truth: Predators keep prey species healthy.

Without cheetahs, gazelles turn into couch potatoes (veldt potatoes?). No one’s chasing them fast anymore — just those slowpoke leopards and lions. The slower, dumber gazelles survive and reproduce. Over generations, the population as a whole gets slower and dumber.

Who cares, right? That’s on a whole different continent. Well, let’s take an example from the headlines in hunting magazines: The spread of chronic wasting disease (CWD) in deer across the U.S. In a world without people, wide-scale animal epidemics like this are rare. That’s because predators specifically target weak and injured prey — and there are always predators waiting to take advantage.

But we don’t live in that world. In our world, predator populations have been greatly reduced by people shooting them, so they can’t do their jobs effectively. So CWD runs rampant.

Wyoming is at the center of the epidemic, with all but one county affected. What does their predator population look like? The state classifies wolves as “predatory animals” in most of the state. That means they can be shot on sight, without even a hunting license required. The rest of the state has a hunting season or is managed by tribal governments or the National Park System (Yellowstone, you know).

So there must be tons of those things, right? Not exactly. The entire state is estimated to have fewer than 300 wolves. A fifth of those live in Yellowstone. That tiny number isn’t going to do much to control the deer herd, estimated at 425,000.

Maybe mountain lions, then? Wyoming does not provide a population estimate, but hunters there kill about 250 to 300 a year, mostly after treeing them with dogs. In absence of official numbers, the Mountain Lion Foundation estimates about 2,000 cats in the state.

Clearly, fewer than 2,300 big predators (spread over 98,000 square miles!) are not going to make much of a dent in clearing out sick deer. Even though wolves and mountain lions strongly prefer such prey, there just aren’t enough of them to do the job.

On the other hand, there are lots of human hunters in Wyoming. In 2018, they killed more than 45,000 deer. However, the way humans hunt is vastly different from the way animals do — and it’s not just the guns and camouflage.

Pick up a hunting magazine. Any one will do. Thumb through it. Take note of the deer pictured. How many have absurdly large antlers? Sure, there may be a few pics of spike bucks or even does. But the average Joe Sixpack who takes a rifle into the woods on opening day is daydreaming about a giant rack mounted over the TV.

And that’s what most Wyoming hunters target: Healthy bucks in the prime of their lives, 32,000 of them in 2018 — about 70 percent of the total harvested. These are animals that wolves and mountain lions will specifically avoid, because they’re the most capable of defending themselves. A predator’s hunting plan is simple: Kill something that won’t hurt you.

Now, the human hunters who went out and shot does were probably thinking more of their freezers than their den walls. Does are smaller, so there’s less meat, but it’s also a lot less gamy. This is closer to the natural model, but not close enough. We need to remove the sick.

Put yourself in the hunter’s boots. You spot a deer from your stand. You put your crosshairs over it. It’s a doe — but she’s thin and drooling. These are classic symptoms of CWD. Do you shoot her, or do you refrain and wait for one that looks healthier?

Duh. When you pick a cantaloupe from the pile, do you get a nice plump one with even coloration, or do you grab the one that’s partly shriveled and has weird dark patches? Nobody wants to eat questionable food, and certainly not when there are higher-quality deer or melons to choose from. So a sick animal lives to spread its disease, while a healthy one dies.

Now, this is not a diatribe against hunting, nor even against hunting for trophies (although hunting just for trophies and wasting the animals is a crime against nature). What I’m advocating for is a more natural balance. Prey animals need predators. Survival of the fittest only works if something is there to remove the unfit. We do a terrible job of that, but predators have it down pat.

One of the main drivers of predator persecution is livestock protection. It used to be a huge problem. But fencing technology has come a long way, baby, and building shelters for overnight safety works wonders for keeping valuable livestock out of predators’ mouths. The use of guardian animals — dogs, sure, but also alpacas, donkeys and geese — is another excellent way to defend herds and flocks.

Some people will always fear attack by wild animals and bring that up as justification for killing predators. When a wolf or mountain lion kills someone (and yes, it does happen), it’s big news. Fatal wolf attacks were reported in Canada in 2005 and in Alaska in 2010. Compare that to lightning strikes, which NOAA says kill about 50 Americans a year, and ask yourself if it’s really a serious issue. Heck, about 20 of us get killed by cows every year. Cows.

Hunters often object to programs of predator reintroduction. On the surface, it makes sense. Who wants extra competition? But it should be hunters advocating the loudest for predators. After all, who benefits more from a healthy, robust population of game animals? That’s exactly what wild predators would do for us — if we would just drop our old prejudices and let them.

Capt. Josh Olive is a fifth-generation native Florida Cracker and a Florida Master Naturalist, and has been fascinated by all sorts of wild things and places since he was able to walk. If you have questions about living with wildlife, contact him at Publisher@WaterLineWeekly.com or 941-276-9657. You can also follow him on Instagram @florida_is_wild.

Capt. Josh Olive is a fifth-generation native Florida Cracker and a Florida Master Naturalist, and has been fascinated by all sorts of wild things and places since he was able to walk. If you have questions about living with wildlife, contact him at Publisher@ WaterLineWeekly.com or 941-276-9657. You can also follow him on Instagram @florida_is_wild.