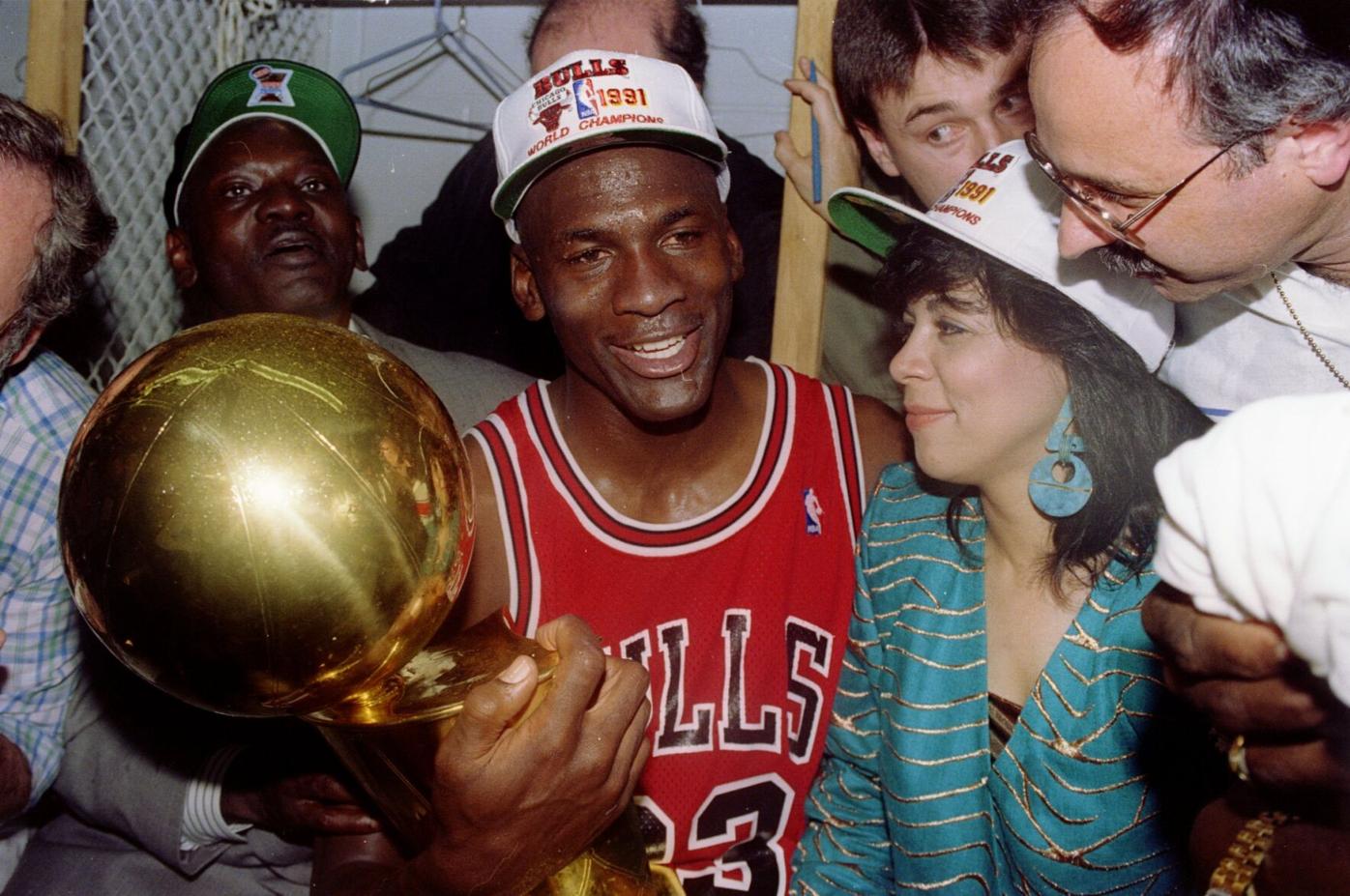 Michael Jordan of the Chicago Bulls sits next to his wife Juanita and his dad James while holding the NBA Championship Trophy after the Bulls defeated the Los Angeles Lakers 4-1 after Game 5 of the NBA Finals on June 12, 1991, at the Great Western Forum in Inglewood, California. 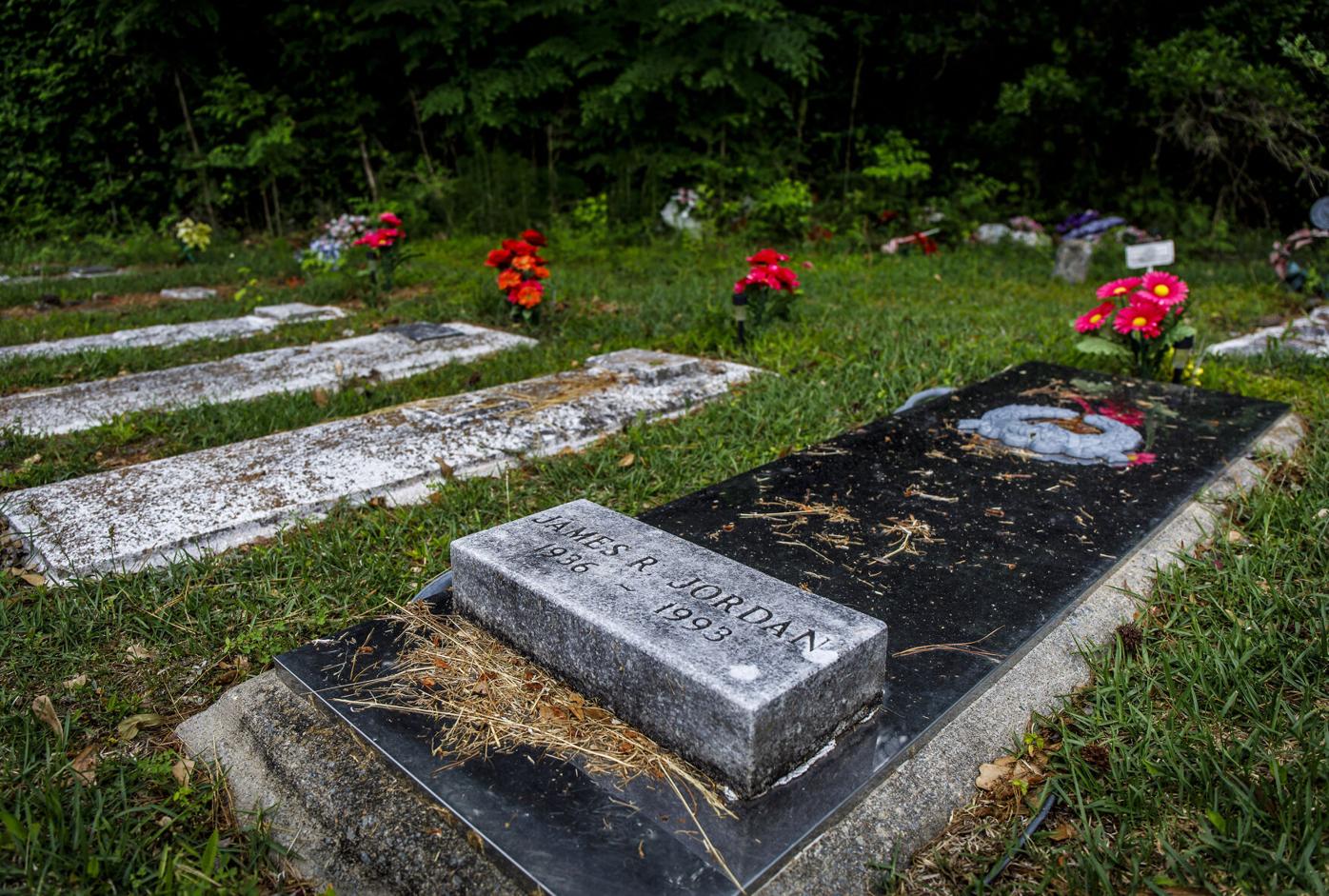 James Jordan's ashes were interred at a small cemetery beside Rockfish AME Church in Teachey, N.C., in August 1993. 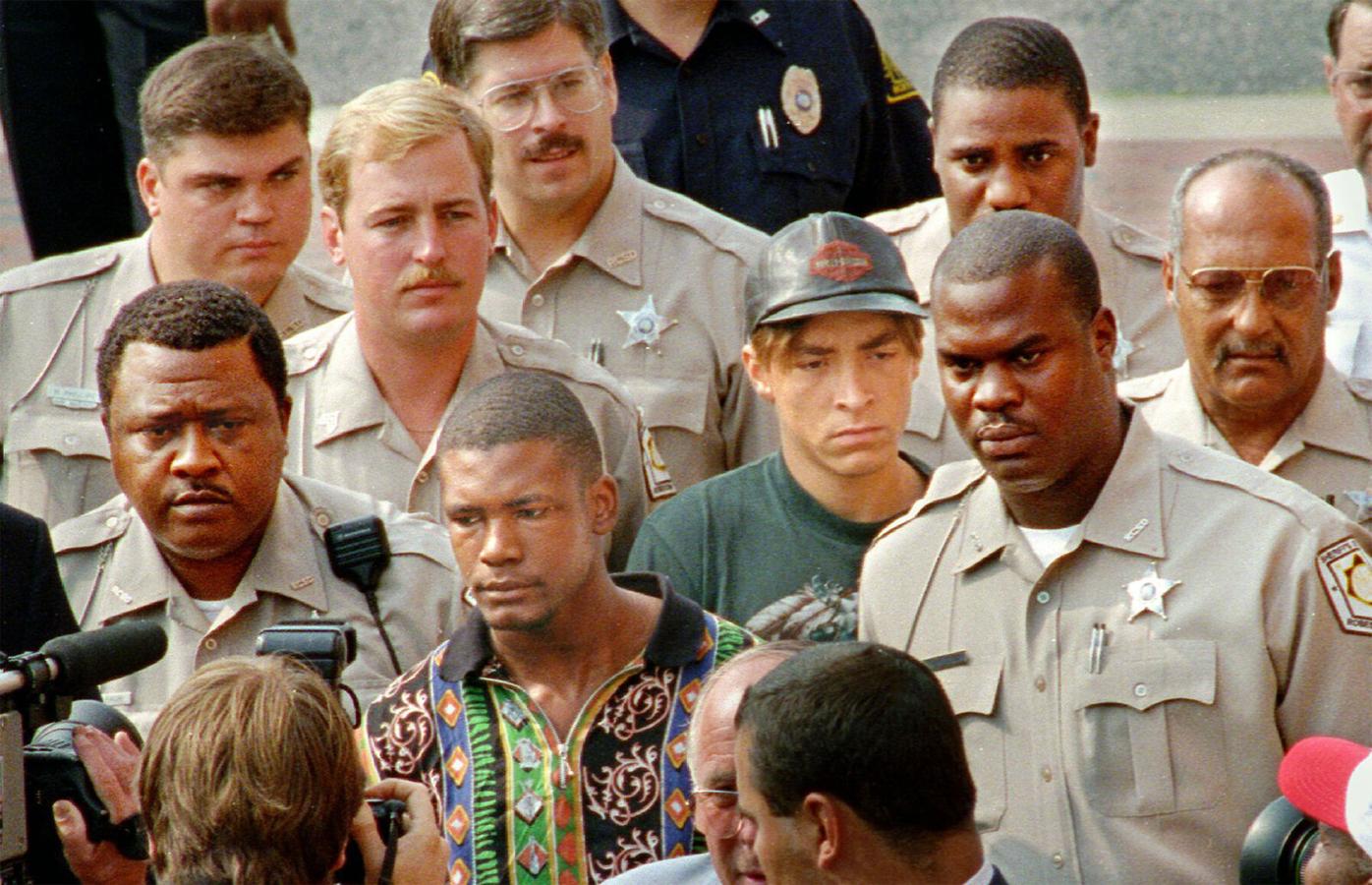 Daniel Green, left, and Larry Demery are surrounded by Robeson County deputies after their 1993 arrests in connection with the murder of James Jordan. At trial, Demery said Green shot and killed Michael Jordan's father during a robbery attempt.

It’s James Jordan’s name and son Michael Jordan’s fame that will bring audiences to imdb.com’s “Moment of Truth,” but the docuseries has little to do with them.

The five-part documentary, which began streaming Friday on the Amazon-owned website best known as a resource for TV and movie credits, is really about justice, incompetence, inconsistencies and allegations of corruption.

The elder Jordan, a murder victim not long after his son’s third NBA title with the Chicago Bulls in 1993, is soon enough an afterthought.

So, too, is Jordan after a retelling of his well-worn basketball origin story, reminders of how close he and his dad were and a clip of the superstar telling Oprah Winfrey in ’93 that he didn’t want to know the killers’ rationale.

The focus of “Moment” is the judicial muck of North Carolina’s Robeson County, where the crime’s investigation and prosecution have a lot for which to answer, and the fate of Daniel Green, one of two men convicted in connection with the murder committed while they were teenagers.

“The crime and the murder of James Jordan is really the gateway to a larger story that we’re telling in this series,” Matthew Perniciaro — a director, writer and producer of the documentary — said by phone on March 31. “That larger story is focused on corruption in law enforcement and systemic racism in the criminal justice system.

“This is a story about a murder investigation and a trial that there are a lot of questions about, and those questions need to be looked at because there are inconsistencies. That was ultimately the goal of the series — to explore the inconsistencies and educate people on them.”

“As far as the exact details of what transpired on that night, there’s maybe only one or two living people that know exactly what happened beat-for-beat that night, and they are not willing to tell that story.” —  Matthew Perniciaro, the docuseries director, writer and producer

If some of the details in “Moment of Truth” sound familiar, especially the ones that contrast with widespread public perception of the case, they should.

Much of the same ground was covered in Dan Wiederer’s excellent, deeply researched Chicago Tribune piece on the 25th anniversary of the murder, a much quicker version of this documentary’s story that doesn’t dwell as much on everything that seemed wrong with Robeson County’s criminal justice system.

“Moment of Truth” taps Wiederer, and the series is better for it in that there could stand to be more independent voices, even if Wiederer and the other journalists in the documentary nevertheless echo the central theme that there remain way too many unanswered questions in the Jordan case.

Helping establish the narrative from the start, for example, is Christine Mumma. She is identified initially only as the executive director of the North Carolina Center on Actual Innocence.

Only later is it revealed Mumma and her organization are representing Green, now in his 40s, in his bid for a new court hearing and release from prison. And, by the end, it’s clear she is as important as anyone in driving this series.

If you’re looking to know what exactly happened on that summer 1993 night, you won’t find it here.

One thing on which Green has remained steadfast: He says he wasn’t the gunman.

But the official story, the one that pegged Green as the triggerman largely on the testimony of partner-in-crime Larry Demery, who cut a plea bargain for reduced punishment, doesn’t seem to hold up. Even the jurors who convicted Green thought so, though the documentary doesn’t revisit any of them.

“As far as the exact details of what transpired on that night,” Perniciaro said, “there’s maybe only one or two living people that know exactly what happened beat-for-beat that night, and they are not willing to tell that story.”

The whole mess plays out like a John Grisham novel with protagonists such as the sheriff whose illegitimate son is a drug trafficker in a county in which a judicial candidate vowing reform is murdered before winning his election.

Green, sentenced to life in prison for first-degree murder, first-degree armed robbery and conspiracy to commit armed robbery, has done some awful things. Many of them are rationalized and/or minimized but not ignored in the documentary.

At the very least, in the Jordan case, he helped dump the body in a South Carolina swamp, drove around in Jordan’s car afterward and was taped dancing while wearing the commemorative Bulls watch and NBA All-Star ring the victim received from his son.

Among the issues raised are why a ballistics test didn’t conclusively connect the gun found at Green’s apartment with the crime, the dearth of blood in the car where Jordan supposedly was shot, the bullet hole in Jordan’s shirt that isn’t mentioned in the coroner’s report, the admission of opinion as fact in the trial record, allowing the prosecutor to cast aspersions on Green’s constitutional right to not testify, the plausibility of Demery’s evolving testimony, the shrugging off of a call from Jordan’s car after the murder to that illegitimate son of the sheriff and, well, you get the idea.

The fact James Jordan was the victim brought a great deal of attention, but it doesn’t seem to have added much scrutiny — although contrary to the impression “Moment of Truth” leaves, some doubts were raised even before trial.

“Moment of Truth” benefits from its Michael Jordan connection in one other crucial way besides creating an audience. WRAL-TV, the Capitol Broadcasting station in Raleigh, North Carolina, has a huge library of archival video from which the series draws.

“This case, because of who was killed, was extremely well-documented,” Perniciaro said. “Most cases where these things take place are not as well-documented. We wanted to use this case as a gateway to talk about some of those larger themes, which we’re still wrestling very much with today.”

Not all the vintage clips come from WRAL, however, and a bit of stock footage in the review copy of the series planted seeds of doubt in everything that followed.

About three-and-a-half minutes into part one, mixed in with stock shots of New York City to illustrate the Jordan family’s time living there when Michael Jordan was very young, there originally was a vintage shot of Chicago’s Michigan Avenue looking north from the Art Institute to the Prudential Building and beyond.

“I would have to look specifically at the footage you’re referencing before I could give you a quote on that,” Perniciaro said less than 48 hours before the series’ release. “I will go back and look.”

A publicist later passed along word the errant Chicago interlude would be removed. But one can’t help but wonder what other lapses — inadvertent or otherwise — there might be in the work that remains.

The same might be said of nearly every true-crime documentary and podcast, however.

“Moment of Truth” starts slowly but builds momentum with part two. Its effectiveness increases as it zeroes in on Mumma’s thus-far unsuccessful efforts to get the legal system to reconsider Green’s sentencing.

If a viewer is looking for something on Michael Jordan and his late dad, better to rewatch 2020's “The Last Dance” instead.

If a viewer is looking for a definitive explanation for what happened to James Jordan, good luck with that.

“Moment of Truth” shows how clear-cut cases sometimes are anything but, and justice can be selectively blind.

“There are a lot of things that weren’t handled properly in the original trial,” Perniciaro said. “The court system needs to look at this.”

If you’re looking to know what exactly happened on that summer 1993 night, you won’t find it here.