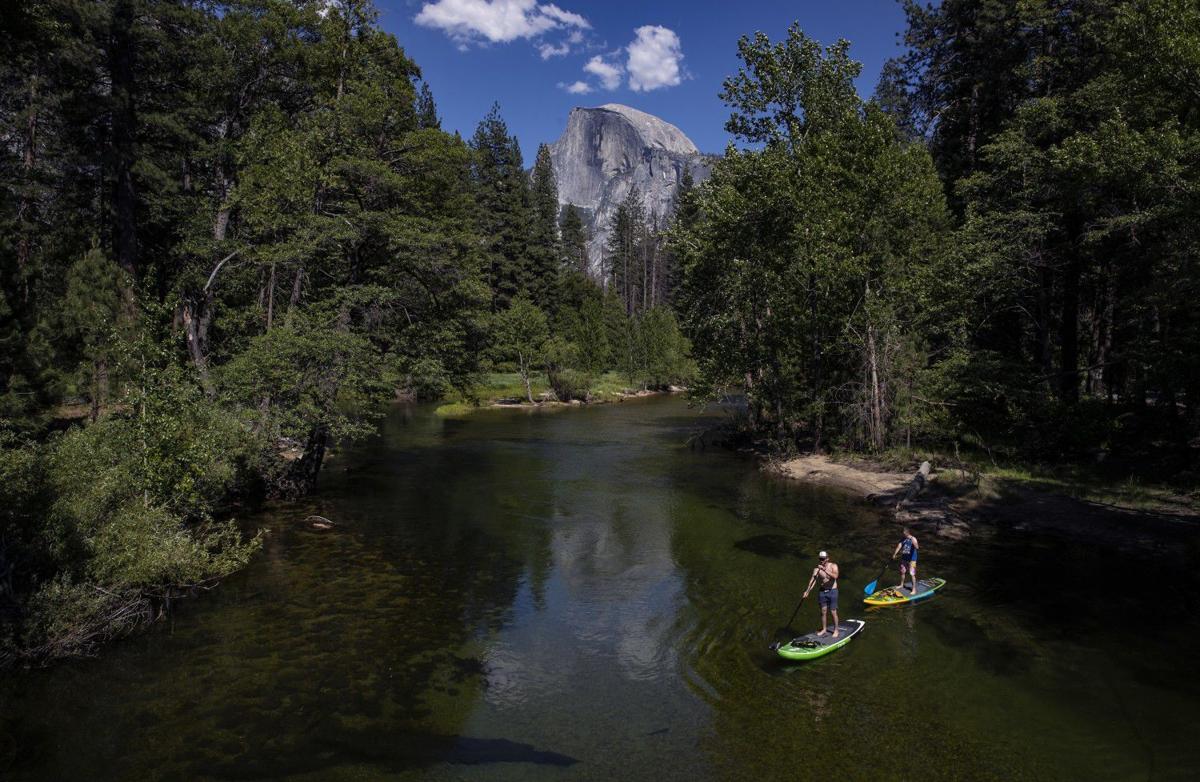 Paddle boarders head out on the Merced River in Yosemite Valley as the park is open for the first time in 2½ months after closing because of the coronavirus on June 11, in Yosemite National Park, Calif. 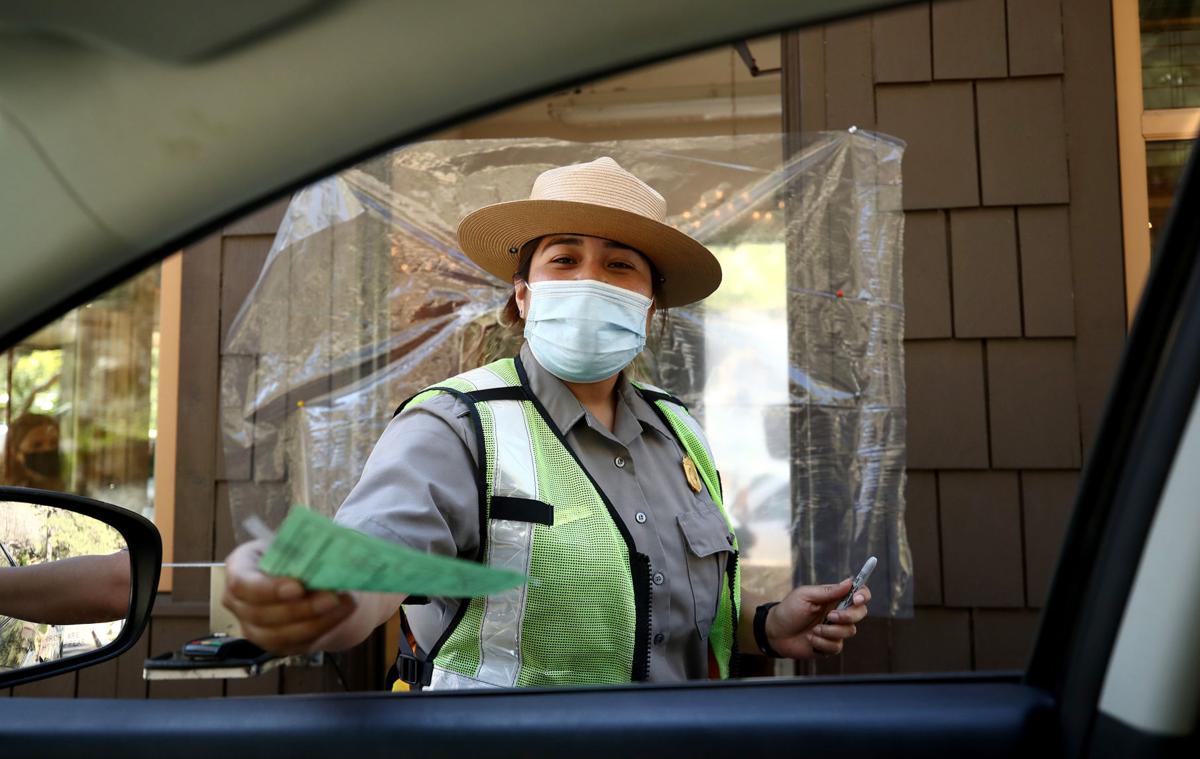 Park Ranger Maria Ayala hands out a daily permit at the entrance to the park in Yosemite National Park, Calif.

Paddle boarders head out on the Merced River in Yosemite Valley as the park is open for the first time in 2½ months after closing because of the coronavirus on June 11, in Yosemite National Park, Calif.

Park Ranger Maria Ayala hands out a daily permit at the entrance to the park in Yosemite National Park, Calif.

Gary Egorov didn’t let not being able to get a day-use reservation stop him from getting into Yosemite National Park on June 11.

The cyclist from Fresno parked in Oakhurst and rode his bicycle up Highway 41.

“Feeling great, beautiful day!” Egorov said after he passed through the park’s south gate around 8 a.m. He waited in a line of about 15 cars and a motorcyclist, who he joked with about switching bikes.

Egorov tried unsuccessfully to get a vehicle reservation online Tuesday, initially planning to bike to Glacier Point from Wawona within the park boundary.

Other visitors in the park either secured a newly-required $2 day-use reservation – needed in addition to normal entrance fees – or had overnight reservations in Yosemite and didn’t need a day-use ticket for admittance. Day-use reservations were sold for the first time via recreation.gov, which had some website issues.

Yosemite announced that it would reopen after being closed since March 20 due to the coronavirus pandemic.

The normally-bustling Yosemite Valley was noticeably more tranquil on Thursday morning, with plenty of parking spaces to enjoy Yosemite Falls and other beloved nature sights.

About 1,700 day-use vehicles and another 1,900 with overnight reservations can be in the park each day – approximately half of Yosemite’s normal daily visitor capacity, officials said. Yosemite had more than 4.5 million visitors last year.

Day-use reservations will be required to enter Yosemite at least into October, according to the park’s phased reopening plan.

Officials said last month that some favorite Yosemite destinations might need to be closed if they become too crowded. Site plans were drafted to manage visitors, primarily in Yosemite Valley.

Luis Miranda, 22, of Wasco in Kern County was in Yosemite for the very first time Thursday with his wife, sister-in-law and son.

Their reaction to seeing Yosemite Valley from Tunnel View: “Oh my gosh! Look at that water!” Waterfalls are still flowing steadily, including the one they were admiring, Bridalveil Fall. The area around that one is currently closed for construction.

Tunnel View viewpoint, normally packed with spectators, had about 15 admirers around 9 a.m., with plenty of parking spaces available.

Miranda’s 5-year-old son, Ian, was “happy.” Ian was scared to come to Yosemite because of its black bears but is now eager to see one.

Few hikers were on one of the park’s most popular trails, a one-mile loop to Lower Yosemite Fall. Sitting on a bench near the base of the roaring fall were two young women from Merced, whose peaceful reflection was only broken by a couple news reporters interested in hearing their thoughts.

“It feels like we have the falls to ourselves, which is very rare,” said Bavneet Kaur, 30. She was joined by Sarvani Chadalapaka, 29. The women work at UC Merced and were given a day off from the university to reflect on what they can do to help make the world a more inclusive place, they said. They woke up at 4:30 a.m. to drive to Yosemite and do just that.

“This is the peace and quiet and solitude I needed to put into action things we’ve been talking about,” Chadalapaka said.

A different group of tourists had scrambled up boulders around the base of Lower Yosemite Fall – what park officials said were supposed to be off-limits.

Most visitors in Yosemite Valley hiked without wearing masks, but seemed to keep their distance from strangers. Small signs posted around restrooms advised tourists to follow guidance from the Centers for Disease Control and Prevention. On the list was “wear a face covering when social distancing cannot be maintained.”

People of all ages, including a family riding bicycles and an elderly couple pushing walkers, were among those soaking in the sights.

Some entrances were modified, including one at Base Camp Eatery, a cafeteria at Yosemite Valley Lodge that opened at 11 a.m. with signs directing people to only enter and exit certain doors. Hand sanitizer stations were in some locations, and portable plastic sinks were set up outside a row of portable toilets at Chinquapin, a popular bathroom stop for tourists at the base of Glacier Point Road.

WHAT IS OPEN AND CLOSED IN YOSEMITE?

All trails are open, officials said, but some have been modified to increase social distancing, including the popular Mist Trail alongside Vernal Fall, which is closed to downhill hiking from 9 a.m. to 4 p.m.

Park shuttle buses won’t operate this year, but buses taking tourists to and from the park via the Yosemite Area Regional Transportation System (YARTS) are still running.

A cafeteria in Yosemite Valley and a few stores selling groceries and souvenirs were open Thursday. Gasoline can still be purchased 24/7 at the pump outside the Crane Flat Store, which is closed.

Only two park campgrounds are open, Upper Pines (at 50% capacity) and Wawona Horse Camp, which require reservations. Officials said they don’t know if or when more campgrounds could open.

A number of services run by concessionaire Yosemite Hospitality, a subsidiary of Aramark, will open this weekend or next week. Bicycle and river raft rentals are among the services making a comeback this summer.

Aramark said Housekeeping Camp is currently closed but officials are continuing to monitor it per the phased reopening plan. The Mountain Room Restaurant also is temporarily closed.

High Sierra Camps, White Wolf Lodge and Tuolumne Meadows Lodge are closed for the season. Historic Wawona Hotel is closed into 2021 for repairs.

Campgrounds and businesses geared toward tourists are slowly reopening in the park’s gateway communities. Yosemite Mountain Sugar Pine Railroad and Tenaya Lodge, both off Highway 41 above Oakhurst, will reopen Friday.

Yosemite’s scenic Tioga Road, which crosses the Sierra Nevada and connects Highways 120 and 395, will reopen Monday. Yosemite officials said day-use reservations are still needed for those just driving through the park. A program remains in effect for locals who live in communities bordering the park that allows some who need access to the road to pass through the park without a day-use reservation, Yosemite spokesman Scott Gediman said Thursday.

Services in the Tuolumne Meadows area are closed for the season.

Yosemite’s backcountry remains accessible to those with wilderness and Half Dome permits. Wilderness centers aren’t issuing permits in person, backpackers need to get them online.

“It’s going to be a different kind of summer,” said acting park Superintendent Cicely Muldoon in announcing the Yosemite changes, “and we will continue to work hand in hand with our gateway communities to protect community health and restore access to Yosemite National Park.”

Park visitors and local tourism leaders have had some questions and concerns about when things will return to normal in Yosemite.

Gediman said the park has an extensive monitoring program in place, which tracks where visitors are using QR codes and physical surveillance by staff. He said the park will issue reports about how many visitors are in Yosemite, and they can adjust the number of visitors allowed in the park to keep visitation at about 50% of normal initially.

Gediman didn’t say what might reopen later this year if conditions are favorable, but did say additional campgrounds are being looked at for possible reopening.

He said recreation.gov now also appears to be working for day-use reservations after it experienced some issues Tuesday due to high demand.

Gediman was “thrilled” to have visitors back in Yosemite on Thursday.

“The waterfalls are flowing, the meadows are green,” Gediman said. “I think it’s a magical time of the year. … We’re just asking people to come with a full tank of gas and snacks. … We’re just excited and it’s fun and people are glad to be here.”