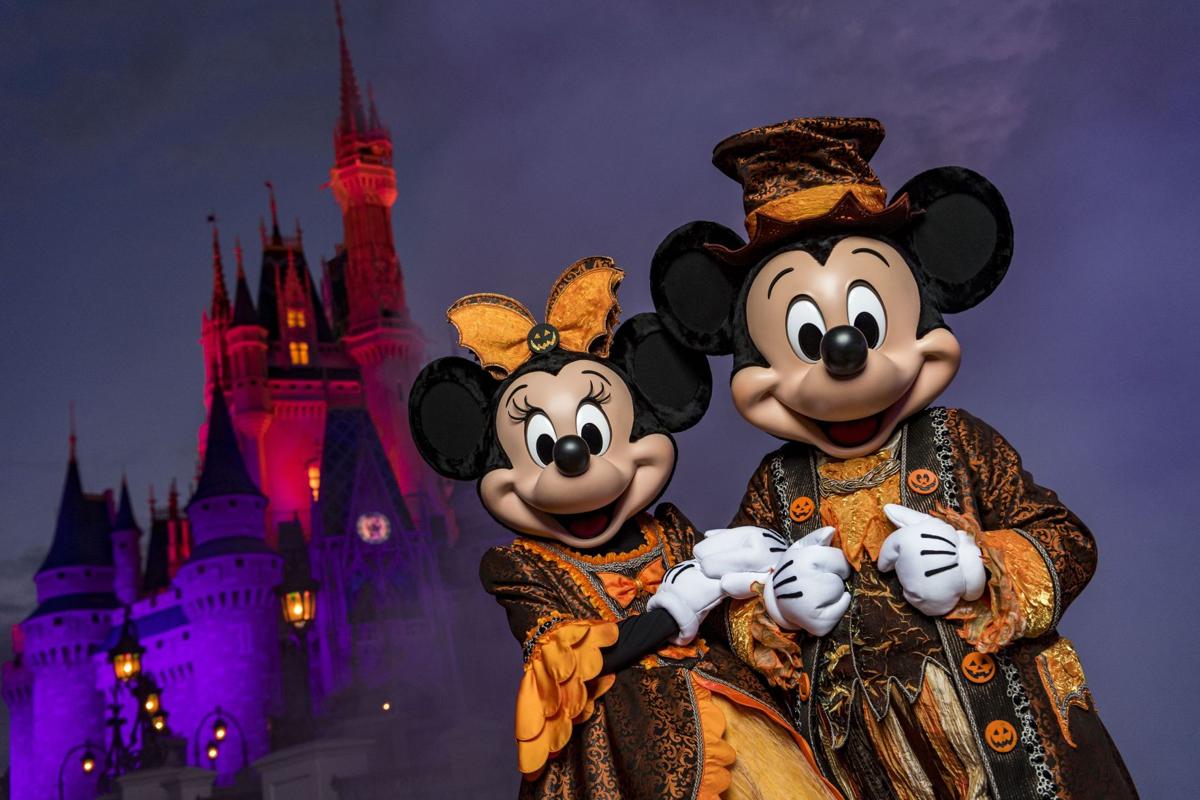 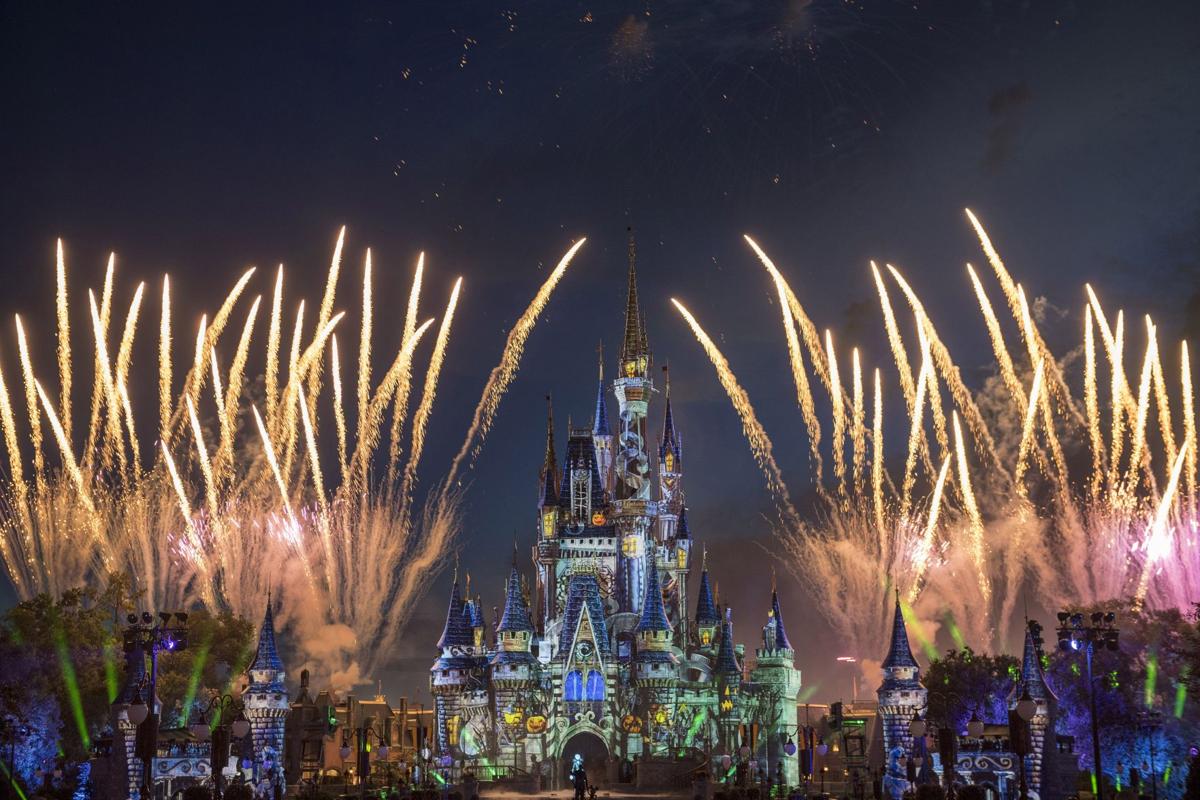 The new “Disney’s Not So Spooky Spectacular” at Magic Kingdom Park invites guests to embark on a hair-raising Halloween adventure with Mickey Mouse, Minnie Mouse, Goofy and Donald Duck. With Jack Skellington from Tim Burton’s “The Nightmare Before Christmas” as host, this spellbinding display of state-of-the-art projection effects, lasers, lighting and dazzling fireworks will delight guests during Mickey’s Not-So-Scary Halloween Party, a separately ticketed event held on select nights through Nov. 1.

The new “Disney’s Not So Spooky Spectacular” at Magic Kingdom Park invites guests to embark on a hair-raising Halloween adventure with Mickey Mouse, Minnie Mouse, Goofy and Donald Duck. With Jack Skellington from Tim Burton’s “The Nightmare Before Christmas” as host, this spellbinding display of state-of-the-art projection effects, lasers, lighting and dazzling fireworks will delight guests during Mickey’s Not-So-Scary Halloween Party, a separately ticketed event held on select nights through Nov. 1.

Here’s a look at all this year’s Mickey’s Not-So-Scary Halloween Party has to offer.

‘Disney’s Not So Spooky Spectacular’

The new “Disney’s Not So Spooky Spectacular” lights the night sky during the witching season in a spellbinding display playing across the heavens. As host of the spectacle, Jack Skellington from Tim Burton’s “The Nightmare Before Christmas” spins a not-so-scary tale about how anything can happen on Halloween night.

Jack’s ghost dog, Zero, brings everyone along on a trick-or-treating adventure where four friends — Mickey Mouse, Minnie Mouse, Goofy and Donald Duck — find themselves drawn into a haunted house. Encounters with dancing skeletons, waltzing ghosts and wickedly troublemaking Disney villains make for a hair-raising adventure. It all comes to life with state-of-the-art projection effects, lasers, lighting and dazzling fireworks.

The galloping Headless Horseman fronts “Mickey’s Boo-To-You Halloween Parade,” setting the stage for spooktacular fun throughout Magic Kingdom. The parade opens with a flurry of beloved Disney friends, including Mickey Mouse and Minnie Mouse in new Halloween costumes. The spectral Bride from The Haunted Mansion appears in the parade this year alongside waltzing spirits and those famous Hitchhiking Ghosts. Pixar pals join the fun, too, including The Incredibles and designer extraordinaire Edna Mode, as well as Buzz Lightyear and alien explorers on a planetary playset float inspired by Pixar’s Toy Story films.

Wreck-It-Ralph, Vanellope von Schweetz and the girls from Sugar Rush make sure there’s plenty of candy to go around during the parade. In addition, pirates sail in from Adventureland, Clarabelle Cow hosts a square dance during a Frontierland hoedown and a wicked assortment of Disney villains reigns over a Fantasyland-inspired grand finale.

As only she can, host Cruella de Vil invites guests to mix and mingle with her impossibly hip circle of friends during Cruella’s Halloween Hide-a-Way at Tony’s Town Square Restaurant. This new reservations-only social promises a fun, festive atmosphere with themed music and décor matched with divine hors d’oeuvres, sweets and drinks (including beer and wine). Guests can come and go as they please throughout the night and enjoy prime parade-viewing spot reserved just for them. The party keeps rollin’ until 12:30 a.m. Reservations are required and can be made at Disneyworld.com or by calling Disney Dining at 407-939-3463.

Enchantments of the season scared up for the party include:

New this year, when guests follow a treat trail into the Monster World at Monsters, Inc. Laugh Floor, they’ll interact with a comic entourage of monsters who are learning about the curious human-world holiday called Halloween.

Among many popular park attractions available to roaming ghosts and goblins, Space Mountain turns out the lights, going completely dark and hurtling guests through the blackness of deep space to the sounds of a new hard-rockin’ soundtrack.

Guests embarking on Pirates of the Caribbean will encounter a crew of live pirates engaged in a whole new swashbuckling quest for treasure.

At the Mad Tea Party, special lighting and music enhance the nighttime experience to bring out the maddest hatter in everyone.

The new DescenDANCE Party takes the stage at Cosmic Ray’s Starlight Cafe in Tomorrowland, where guests can groove to a beat inspired by the “Descendants” Disney Channel movies.

Information: Tickets for Mickey’s Not-So-Scary Halloween Party can be booked through Disneyworld.com or call 407-827-7350. Children are encouraged to dress in costume and enjoy the spirit of Halloween with their families.