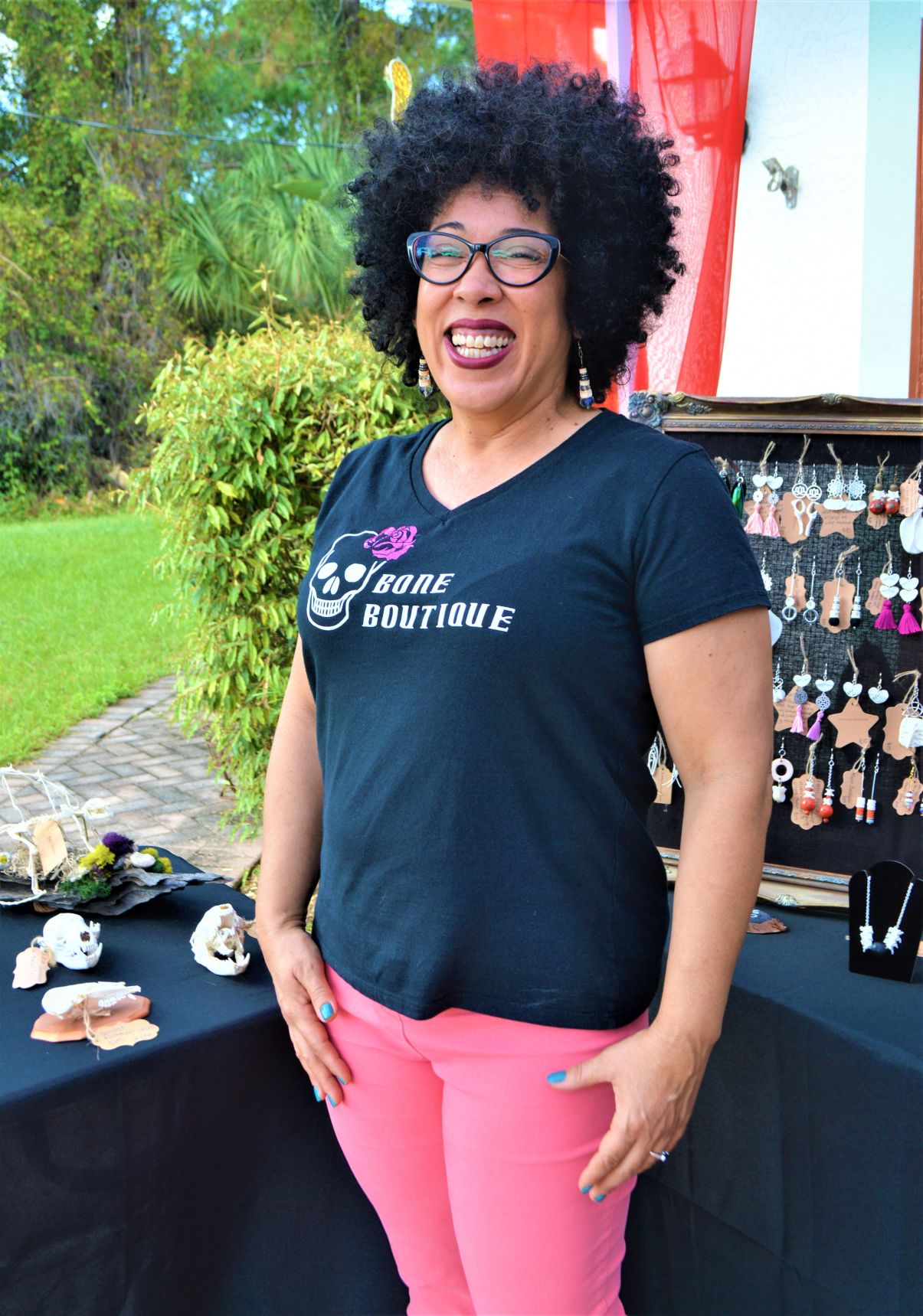 Michele Moore is the artist behind the Bone Boutique. 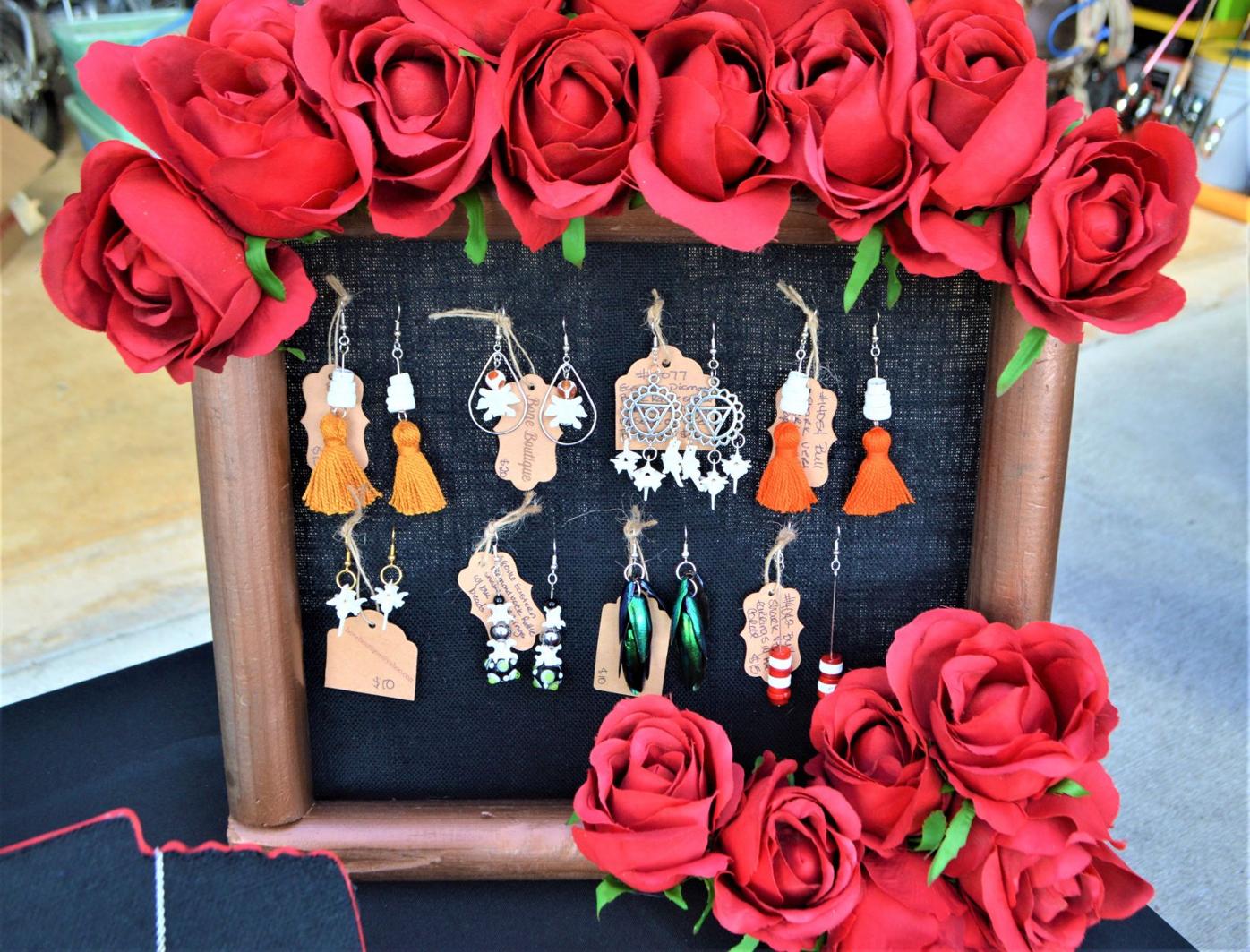 Bone Boutique jewelry is made from bone, beads and metal. 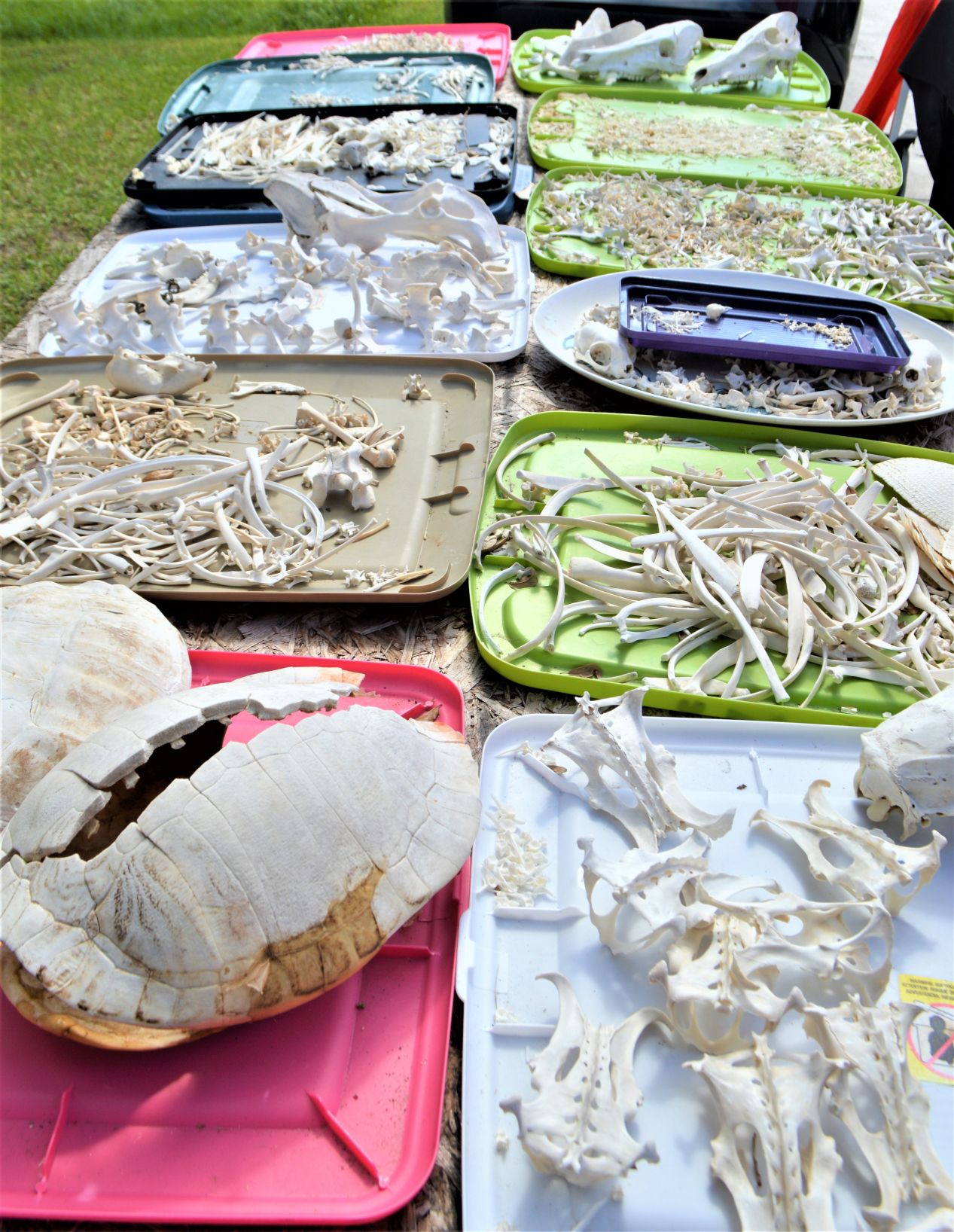 Michele Moore has a multi-step process she uses to bleach and sanitize the bones she uses in her art. 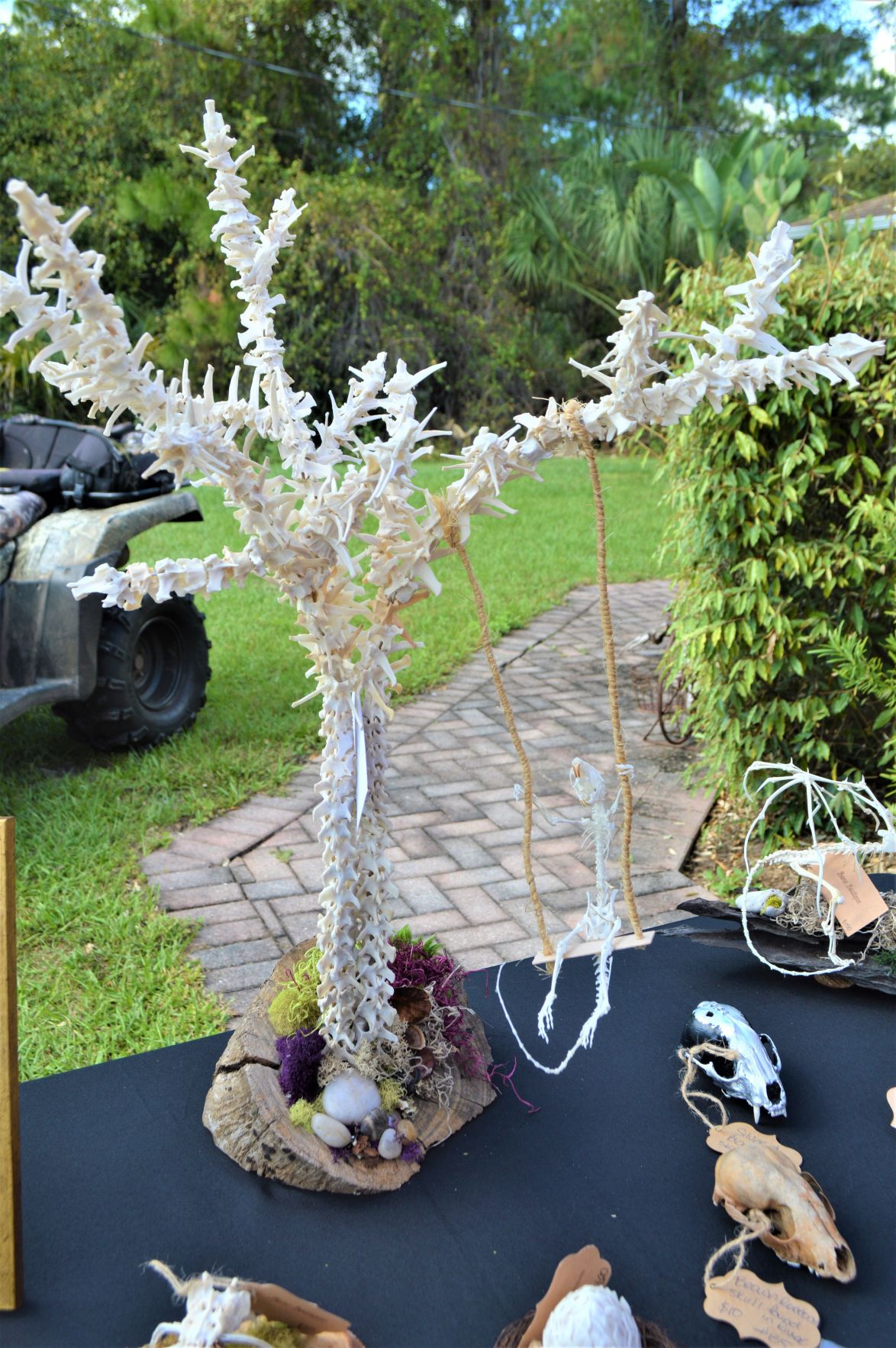 Michele Moore and her Bone Boutique create jewelry and sculptures from natural bone. 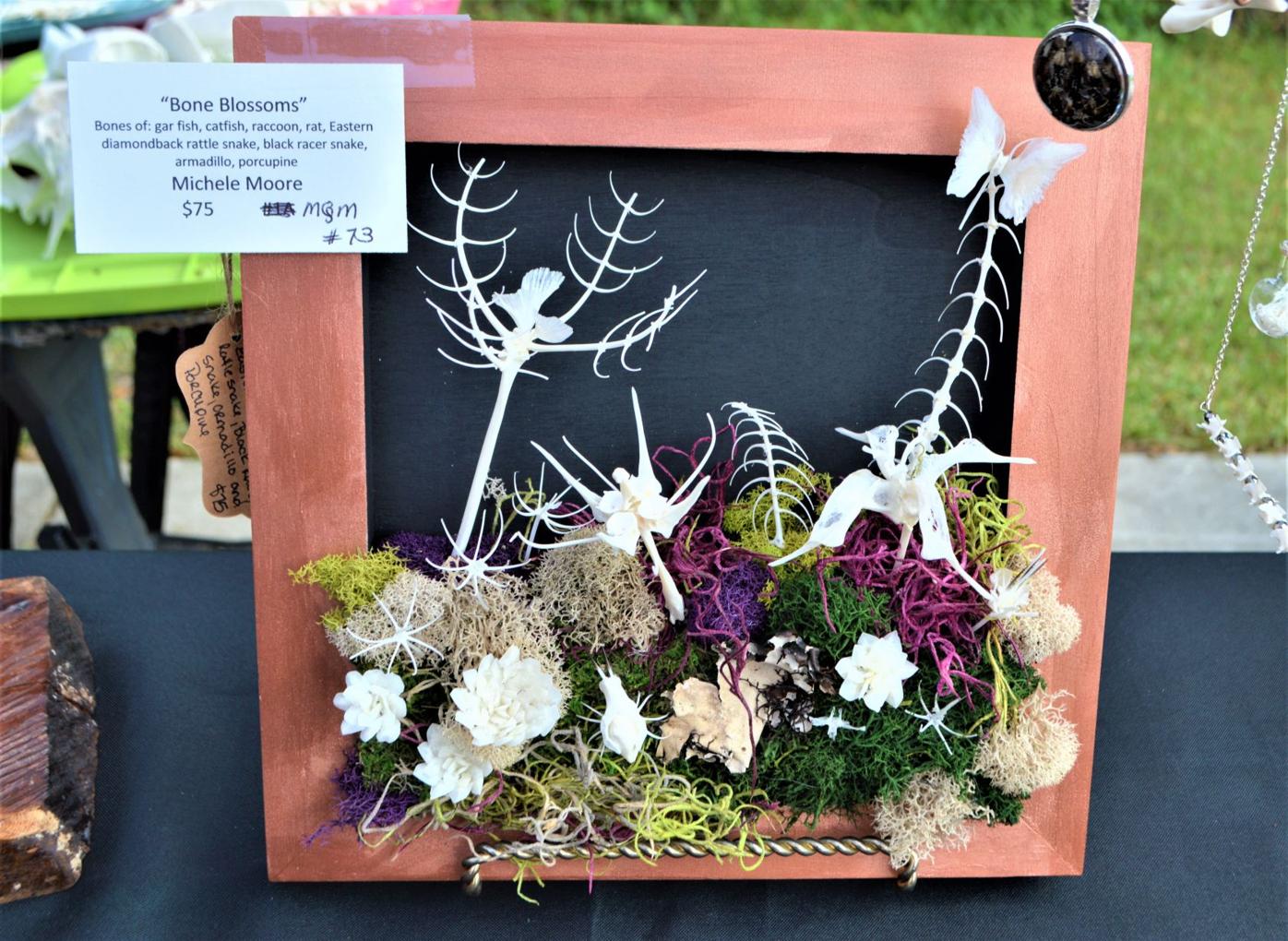 “Bone Blossoms” won a prize in an art show. The flowers are made with Spotted Garfish scales.

Michele Moore is the artist behind the Bone Boutique.

Bone Boutique jewelry is made from bone, beads and metal.

Michele Moore has a multi-step process she uses to bleach and sanitize the bones she uses in her art.

Michele Moore and her Bone Boutique create jewelry and sculptures from natural bone.

“Bone Blossoms” won a prize in an art show. The flowers are made with Spotted Garfish scales.

About 15 years ago, North Port resident Michele Moore was creating beaded jewelry and really enjoying it. But with a full time job, she really didn’t have a lot of time to devote to her hobby, so she boxed up her supplies and put them away.

Years later, she was with some acquaintances and witnessed the butchering of a wild boar, which she had never seen before, and was pretty upset by the experience.

“I was disgusted,” Moore said. “And I thought that there had to be a better and more humane way to clean it. Then about four years ago, I found a squirrel skull, and when I looked inside the back of it with my phone, I saw that it was a beautiful art piece that nature had created.”

Her interest piqued, Moore began picking up deceased small animals by the side of the road. She developed her own method of cleaning and sanitizing the bones, a lengthy process, but one that needed to be done for what she was going to use the small bones for — making jewelry.

At first, she was only making the unique baubles to give to friends as gifts, but that soon changed.

“My mother-in-law entered some of my jewelry in a craft show,” Moore said. “Then I began making sculptures, but I decided early on that I didn’t want to go dark and gothic with this.”

On the contrary, Moore’s sculptures and jewelry she makes for her company, Bone Boutique, are beautiful, sometimes whimsical and always creatively arranged. Now known among local farms and other resources as the “Bone Lady,” she is the one they call when they have a deceased animal they think she may be able to use in her art.

She refuses to use family pets in her work, and carries a “roadkill kit” in her car, which she can use if she sees something on or next to the road while driving along.

Moore does have a tried and true way of finding those types of things on her own out in the Sarasota County countryside.

“I look for the vultures,” she said. “Apparently, it’s called ‘vulture culture,’ I had no idea. I find bones everywhere I go, so I carry bags and gloves with me at all times.”

Without going into too much detail, the process of removing flesh, muscle and tendons from the bones is not pretty, but after that happens, Michele begins a series of sanitizing and bleaching the bones, which she refers to as “being blessed by the sun.”

When she displays her art at the North Port Art Center or at any of the local craft shows she attends, she tags each one with a description of which animal’s bones, scales or teeth are used in the piece. For instance, one of her award-winning works, named “Bone Blossoms,” is comprised of gar fish, catfish, raccoon, rat, eastern diamondback rattlesnake, black racer snake, armadillo and porcupine.

Moore prices her jewelry starting at $5, and her sculptures are also well-priced, making her art accessible to anyone who likes it, which is almost every person who sees it.

She says that while this type of art is not something that she would have anticipated doing many years ago, she is thrilled to be able to offer something a little different.

“I would say my ultimate goal in doing this is to inspire others to be creative and follow their hearts,” Moore said. “It’s good to step out of your comfort zone and do what you love.”

To learn more about the Bone Boutique, and to find out where Michele Moore will be displaying her work, keep an eye on her Facebook page for official announcements at www.facebook.com/boneboutique1. She is also able to take online orders for her art and jewelry on this page. For more information, call 941-468-4805.