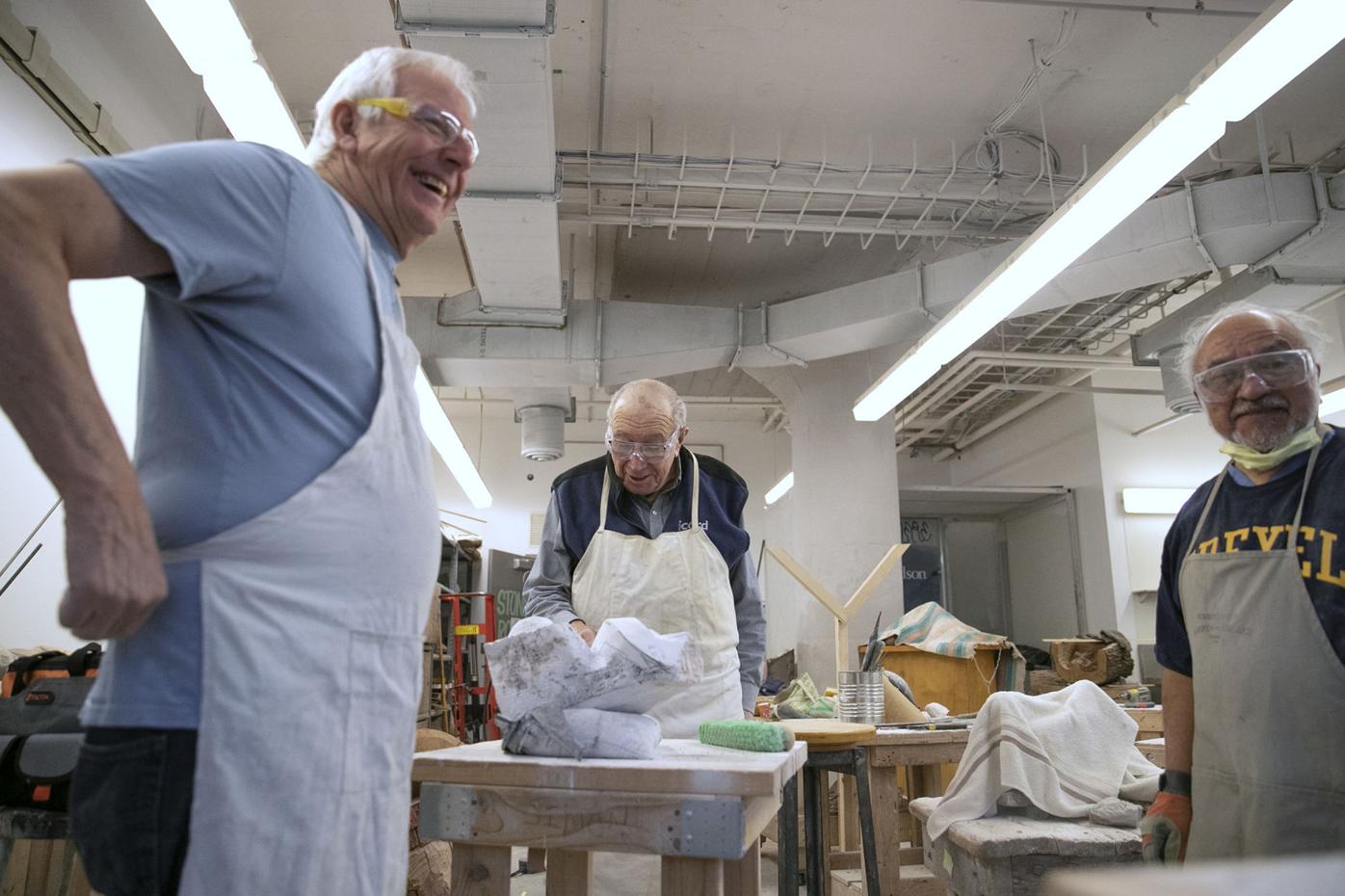 John Ditunno laughs along with Alan Miller, left, an ENT doctor, and Francisco Toledo, right, a gastroenterologist, during their class at the Pennsylvania Academy of Fine Arts in Philadelphia. 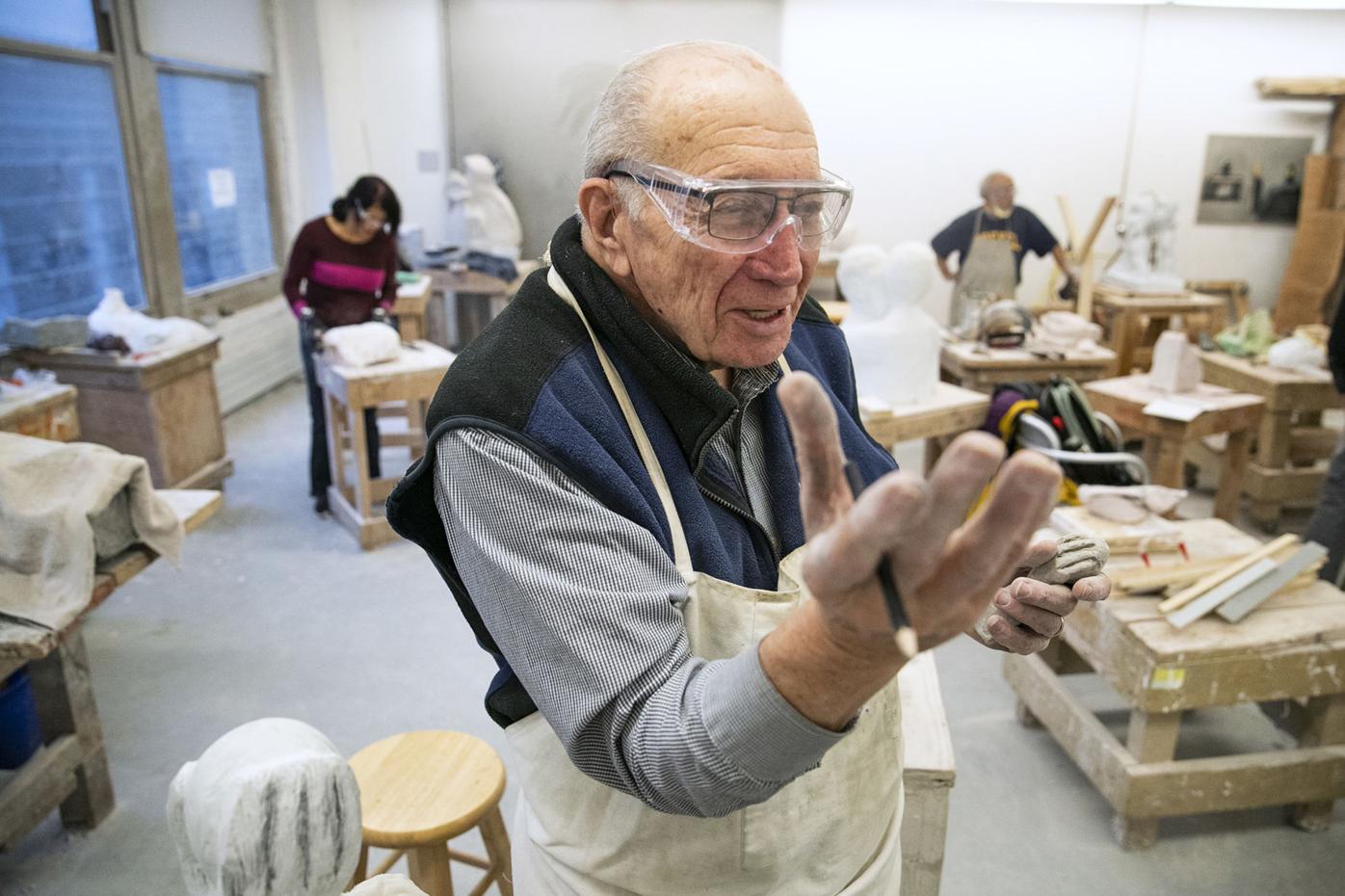 John Ditunno has been sculpting for 40 years. Some of his work reflects the challenges of patients who had spinal injuries.

John Ditunno laughs along with Alan Miller, left, an ENT doctor, and Francisco Toledo, right, a gastroenterologist, during their class at the Pennsylvania Academy of Fine Arts in Philadelphia.

John Ditunno has been sculpting for 40 years. Some of his work reflects the challenges of patients who had spinal injuries.

Twenty-four years ago, John Ditunno took a sabbatical from his work as a spinal cord injury rehabilitation doctor at Thomas Jefferson University Hospital in Philadelphia, Pa., to learn something new in Italy.

He and his psychologist wife, Patricia, were there to develop a measure of walking function in injured patients, but Ditunno also found time to study sculpture. He’d been carving wood for years, and he wanted to see what he could do with stone.

Soon, he would use the ancient art form to meld his interests by sculpting figures in wheelchairs, which, while metaphorically anchored to the stone by injuries, also conveyed the hope he often saw in his patients.

Some of his work wound up in spinal cord centers in India, Canada, Italy, and, of course, Jefferson. Most of his sculptures, including his first of Patricia’s head, are at their house in Avondale. A handful more are in their apartment in Center City.

“I’m kind of running out of space,” Ditunno joked. “I don’t sell them.”

Ditunno, who is now 87, retired from teaching in August after 50 years at Jefferson. He stopped seeing patients 15 years ago. But he hasn’t stopped sculpting, and his work is still defined by hope.

Ask him about his latest project, a woman’s hand holding a lotus flower bud, and he lights up with enthusiasm. The lotus symbolizes luck, he explains. “Your good luck is opening, and you have it in the palm of your hand.”

Ditunno was honored recently at the 50th anniversary of Jefferson’s rehabilitation medicine department, which he chaired for almost 30 years. A fund — the John F. Ditunno Jr. M.D. Rehabilitation Medicine Endowed Research Fund — has been started in his name. Ditunno also cofounded the Regional Spinal Cord Injury Center of the Delaware Valley at Jefferson and was its director from 1979 to 2006.

Jefferson neurosurgeon Ashwini Sharan met Ditunno more than 20 years ago while Sharan was in training. He called Ditunno the “consummate, complete mentor,” a loving, always-smiling force who “glowed” with enjoyment.

Working with spinal cord injury patients can be tough, Sharan said. Patients are often young victims of tragic accidents. “You fix their spine, but you have not fixed their spinal cord,” he said.

Ditunno said he didn’t find the work sad. He’d spend an hour or more talking with new patients and their families. “I was offering hope to the family at a very difficult part of their lives,” he said.

Sharan arranged for Ditunno to sculpt a figure for the Indian Spinal Injuries Centre in New Delhi after a cousin was treated there. Sharan had noticed Ditunno’s sculpture of a patient and was impressed when his teacher told him that he always had patients looking up toward “the future.” The marble base itself symbolized their paralysis. The upper body was strong because it had to compensate for the injury. “This is phenomenal,” Sharan thought. He has a Ditunno sculpture of a wheelchair basketball player taking a shot at his home.

“I wanted to try to portray the figure in the wheelchair as a courageous person who was overcoming their disability,” Ditunno said recently.

Now that he no longer sees patients regularly, he is more drawn to the grace and beauty of animals or the nondisabled human body. He has also done some abstracts.

As he has for more than 20 years, he spends many of his Saturday mornings in a sculpture class at the Pennsylvania Academy of the Fine Arts. The sculpture studio is a noisy, dusty place that, on a recent Saturday, held three other physician-students: Steve Liebhaber, 73, a molecular biologist and hematologist at Penn Medicine; Francisco Toledo, 74, a gastroenterologist; and Alan Miller, 76, a retired ear, nose, and throat doctor.

All had come for a creative outlet that put their knowledge of anatomy to use. There were some jokes about how often they sculpt nudes. They have an advantage over the artists who also frequent PAFA, Ditunno said. “We don’t have to worry about income.”

Though bent a bit from his full adult height of 6-foot-1-inches, Ditunno remains robust and broad-shouldered. He propped his sculpture, still in the early stages, on a sandbag as he chipped and filed away, sometimes with the aid of an air compressor. Dust and marble flakes piled on his workspace. Ever the teacher, he explained the importance of establishing the proper planes in the marble before creating the curves or details like fingers and petals.

The only thing that’s gotten harder as he’s aged, he said, is bending over to pick up fallen tools.

Ditunno finds it relaxing to let the artistic side of his brain take over. He had started this piece in the fall, and it would be months before it was finished. Sculpture is an exercise in patience, forethought, and precision.

After three hours of work, the graceful curves of a hand and wrist were more apparent. It was satisfying for a doctor who long ago learned to find hope in small improvements.

“You get an exhilaration, I guess a kick, out of seeing this figure emerge out of stone,” Ditunno said. “You’re creating.”