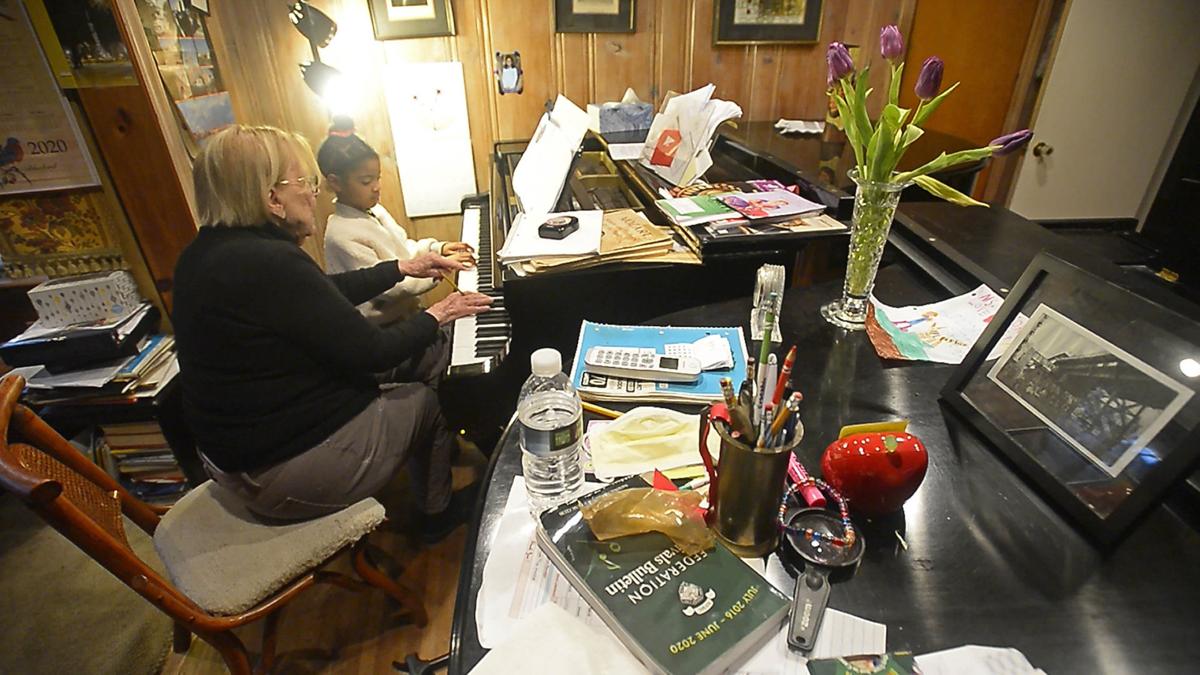 Dzidra Reimanis, a 92-year-old piano teacher, conducts a lesson with Kendall McKnight, 6, in Reimanis' home on Feb. 6. Reimanis has taught piano in Charlotte for more than 50 years. 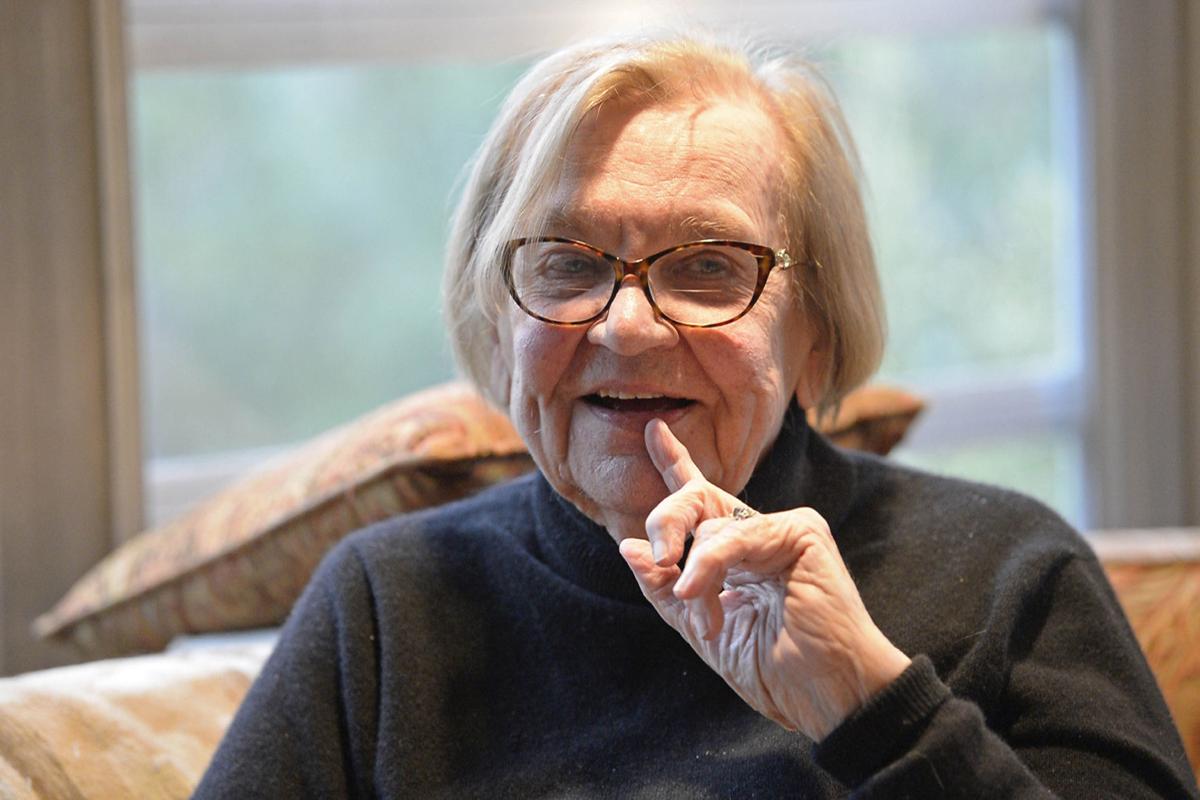 Dzidra Reimanis, a 92-year-old piano teacher, has taught piano for more than 50 years.

Dzidra Reimanis, a 92-year-old piano teacher, conducts a lesson with Kendall McKnight, 6, in Reimanis' home on Feb. 6. Reimanis has taught piano in Charlotte for more than 50 years.

Dzidra Reimanis, a 92-year-old piano teacher, has taught piano for more than 50 years.

At 92 years old and with more than six decades of piano teaching experience behind her, you'd think Dzidra Reimanis has had every experience with students one could possibly have.

But recently, she surprised even herself by adding a new skill to her teaching arsenal — online instruction.

It all started in mid March, when a director at Arts Plus, the arts education nonprofit that Reimanis teaches for, told private teachers they'd need to start doing virtual lessons because of the novel coronavirus pandemic.

Reimanis, whose computer know-how consisted only of Google searches and reading, but never sending an email, wasn't having it.

"I told him, 'I definitely will not do that, and you might as well accept it,'" she said proudly, then laughed.

But parents called with encouraging words.

"You can do this," said one mother.

A 33-year-old student, who'd gifted her a new Dell desktop computer a few months back, came over, opened up Skype and showed her that with three clicks she can connect with a student and peer right inside their home.

Suddenly, Reimanis was in the game.

When a former student who's now a big-shot composer, Daniel Thomas Davis, called her recently to check in, she told him she'd ring him back via Skype, and the two caught up face-to-face.

"I brag about it. Nobody can believe it," Reimanis said by phone one afternoon, her gleeful laughter filling the phone line.

"I called the school (Arts Plus) and I said, 'I am Skyping!' A 92-year-old woman is learning how to Skype!"

When we first meet Reimanis in her Dilworth music room where she teaches, it's approaching noon on a chilly winter Thursday before the pandemic struck. Reimanis is wrapping up nearly two hours of lessons for the three McKnight sisters, ages 12, 8 and 6.

She perches on the edge of a red cane back chair and coaxes Kendall, 6, through "Gallop, Pony," pointing in the music and adjusting the position of Kendall's tiny fingers as she goes.

One hundred and five straight minutes of piano lessons could be mentally exhausting for any teacher, and if anyone has reason to be fatigued, it's Remainis. But she doesn't.

"I never get tired," she says.

After more than five decades of teaching piano in Charlotte, she remains one of the city's most sought-after piano teachers.

Reimanis has taught three generations of students in the same family. She taught a student named Dominick Amendum who went on conduct "Wicked" on Broadway, and Davis, who composes for operas and orchestras worldwide.

She was one of the first teachers who signed on to give lessons to low-income and at-risk students when the non-profit Community School of the Arts was in its infancy in 1969. She still works for the organization, now called Arts Plus.

The McKnights, who are homeschooled and able to take lessons in the middle of a weekday, have been studying with Reimanis for four years _ a fraction of her teaching career.

Charlotte McKnight, the girls' mom, said she knew Reimanis was a star when she went to dinner with an older couple soon after making the switch from another local piano teacher to Reimanis.

"They asked me who our piano teacher was," Charlotte McKnight recalled. "I said Dzidra's name, and the woman was like, 'She taught me piano. "

Reimanis laughs. But she doesn't look a bit surprised.

Reimanis was born in 1927 in Latvia's capital city of Riga, to music-loving parents. Her father played coronet in a local band. Her mom, blessed with the God-given talent of perfect pitch, sang in a popular choir before having children.

Reimanis isn't sure when she first sat down to a piano, but she knows it was early. "Mother and me, we always argued. I thought I was about 8, and she said, 'You were 6 or 7.' "

In the 1920s and '30s her mother ran a factory that gathered the milk from 200 farmers and produced dairy goods to export to England. But during World War II, the Germans invaded and Reimanis' family fled to an American military zone in Germany. She was 17.

Several times, the family was forced to move to different displaced persons camps, but each time Reimanis would find a piano, somewhere, to play.

She had no teachers and no sheet music. So when she found someone with a piece of music, she'd find a piece of paper and copy it down by hand.

In one of the camps, she would spend night after night making music on a beat-up old upright piano in the basement of an Army building. Through the melodies, she would seek to answer the question: "Why am I here?"

She married while in Germany, then came to the United States in 1949, and she and her husband settled in Charlotte. She got a job in an office and learned to type.

She and her husband spent $90 for a piano and Reimanis began studying piano under Queens University of Charlotte (then Queens College) professor Elsie Mosley.

When she was about 25, she came down with tuberculosis. She spent more than a year in a Huntersville sanatorium recovering, six months of that lying flat on her back.

Doctors thought she was better, and released her. But within a year she relapsed and found herself back in Huntersville. She needed a section of lung removed.

Once she had recovered the second time, Mosley urged Reimanis to quit her office job and implored her: You need to make music your life.

And so she did.

Her first students were two girls whose parents were Latvian. Then, as word of her teaching prowess spread, her student list grew longer, until it reached 60. Teaching felt natural.

"I think I'm a dictator," Reimanis laughs. "I like to tell everybody what to do."

By 1969, she was considered one of the best piano teachers in the city. Henry Bridges, the organist and choir director of First Presbyterian Church uptown, reached out with a request.

He had 15 pianos sitting, mostly unused, in the basement of the church, and he wanted to invite the poor, mostly African-American, kids who lived around the church to come in for piano lessons. A federal judge had just ruled that Charlotte's schools were illegally segregated.

He asked Reimanis to join him. She did, and was one of the first teachers of what would become Community School of the Arts.

"To be part of that was one of the highlights of my life," Reimanis says. "I learned so much about community, about organization. Where from nothing, you have a group of people who want to do something really good."

These days, it's the physical toll of aging that gets Reimanis down.

Getting around isn't as easy as it was, and some days she feels slow. Her student list is currently 25 _ a workload that would seem unimaginable for most 92-year-olds.

In her youth, she'd never bother to take notes at teacher meetings or even keep a paper calendar; dates and notes were firmly planted in her brain.

Now, she writes things down. And although she relies on her notes to remind her of things, her memory seems to belong to someone decades younger. When a student's dad calls looking to switch his son's lesson, she easily rattles off what days and times she has available.

Reimanis doesn't get out to teacher staff meetings or to grocery shop like she used to. She has weekly meals delivered by the meals-on-wheels organization Friendship Trays.

When Arts Plus executive director Devlin McNeil wanted to get to know Reimanis when she started at the non-profit almost seven years ago, she signed herself up for three weeks of piano lessons and showed up at Reimanis' house.

"My very first lesson, I go in, and she teaches me the five or six chords to 'Ode to Joy,' " McNeil remembers. "Then she said, 'You go into the office, and you tell them you played Beethoven.' "

The Skype lessons have barely begun, and Reimanis is already eager for the in-person lessons to return once the pandemic is over.

She loves seeing her students walk through the door and sit down at one of the two back-to-back grand pianos in the music room in the center of her home.

She can't get out into the world as much as she used to. But every week, 25 members of the world come to her. The energy she draws from them, she says, gives her no desire to retire.