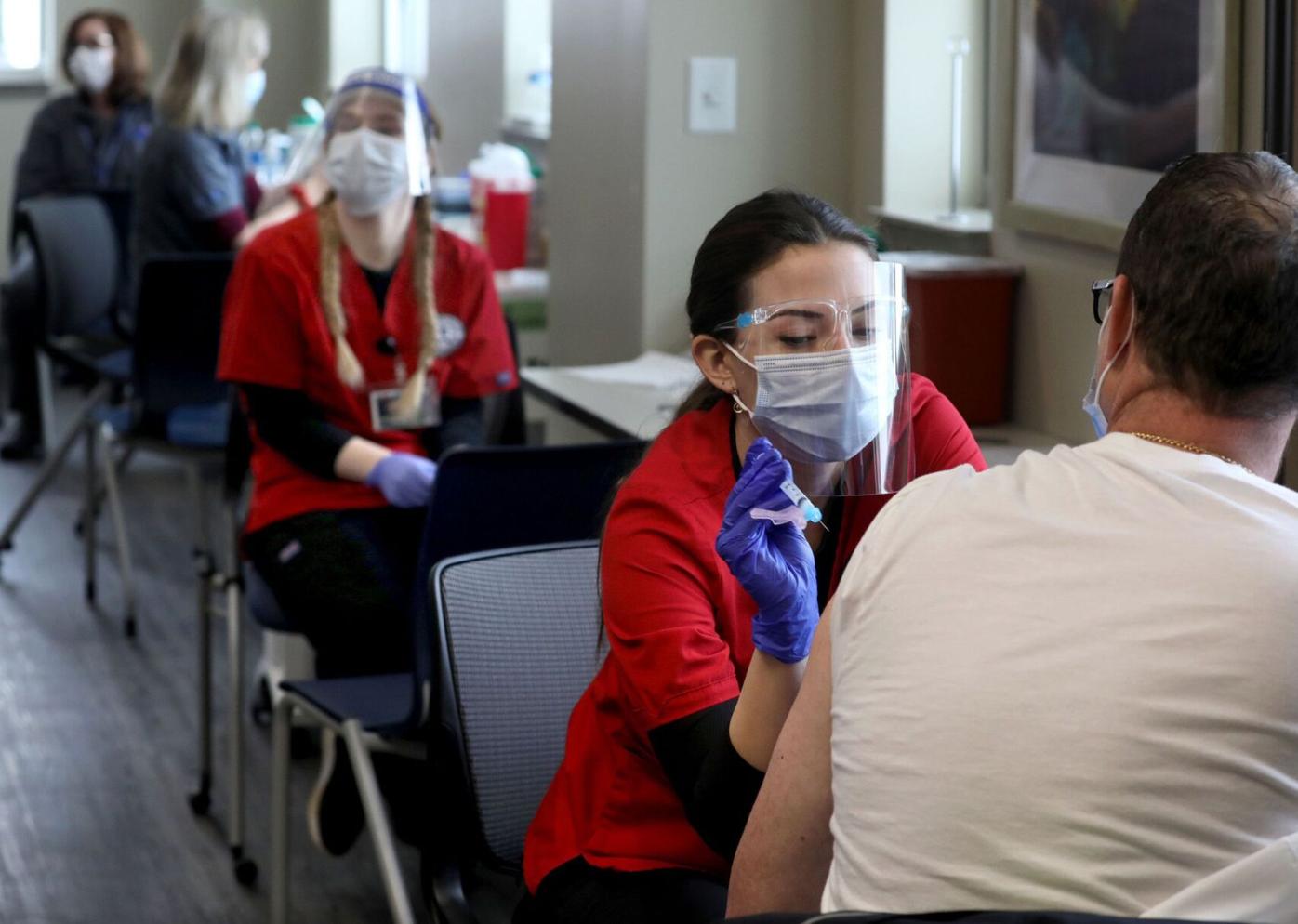 Nursing student Kaley Mesewicz, second from right, from the Lewis University College of Nursing, volunteers administering the Moderna COVID-19 vaccine to people at Will County Community Health in Joliet, Ill. 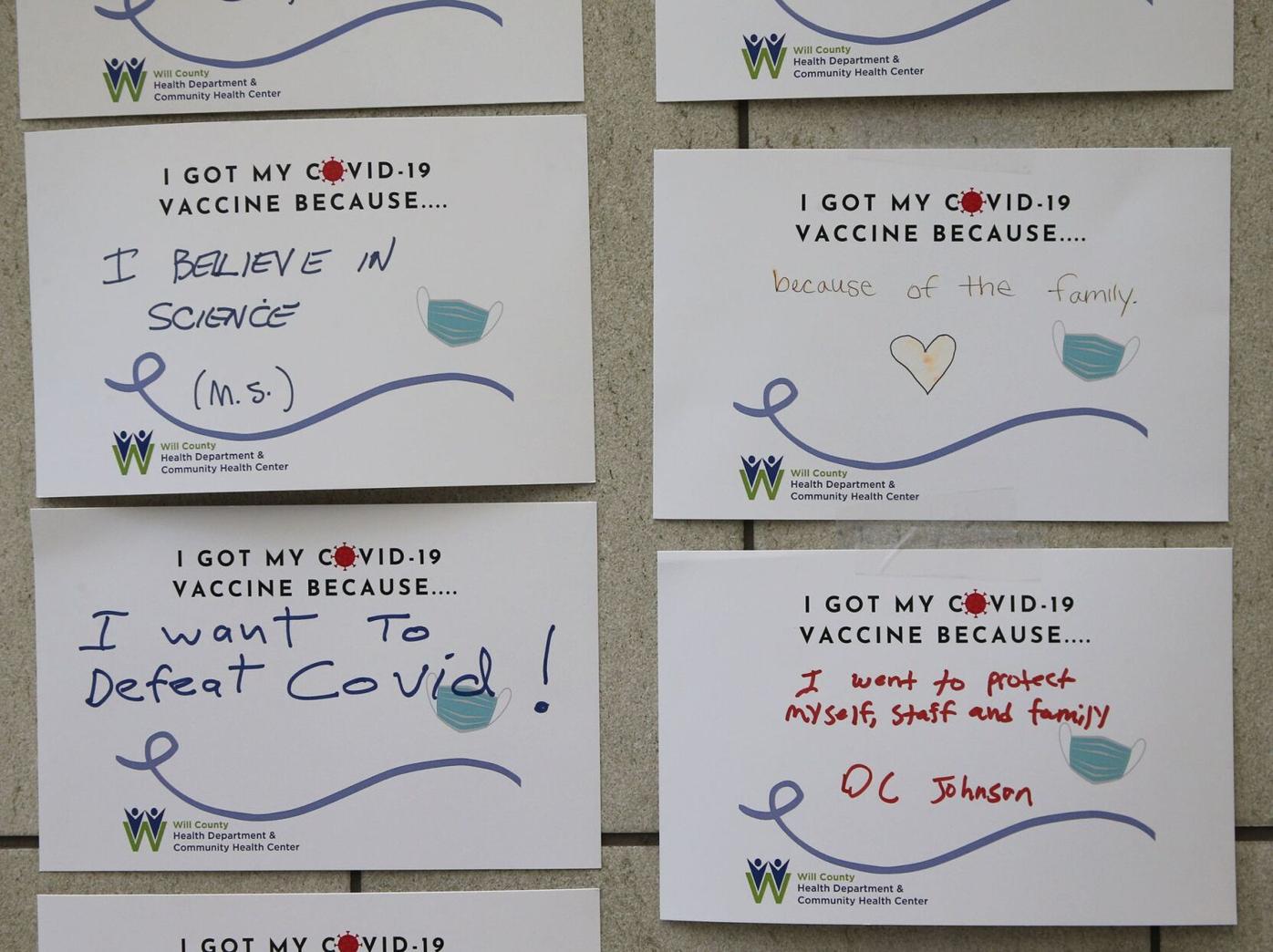 "I got my COVID-19 vaccine because..." postcards from people who had received their COVID-19 vaccines at Will County Community Health in Joliet, Ill., on Feb. 8. The cards were displayed in the front lobby area. 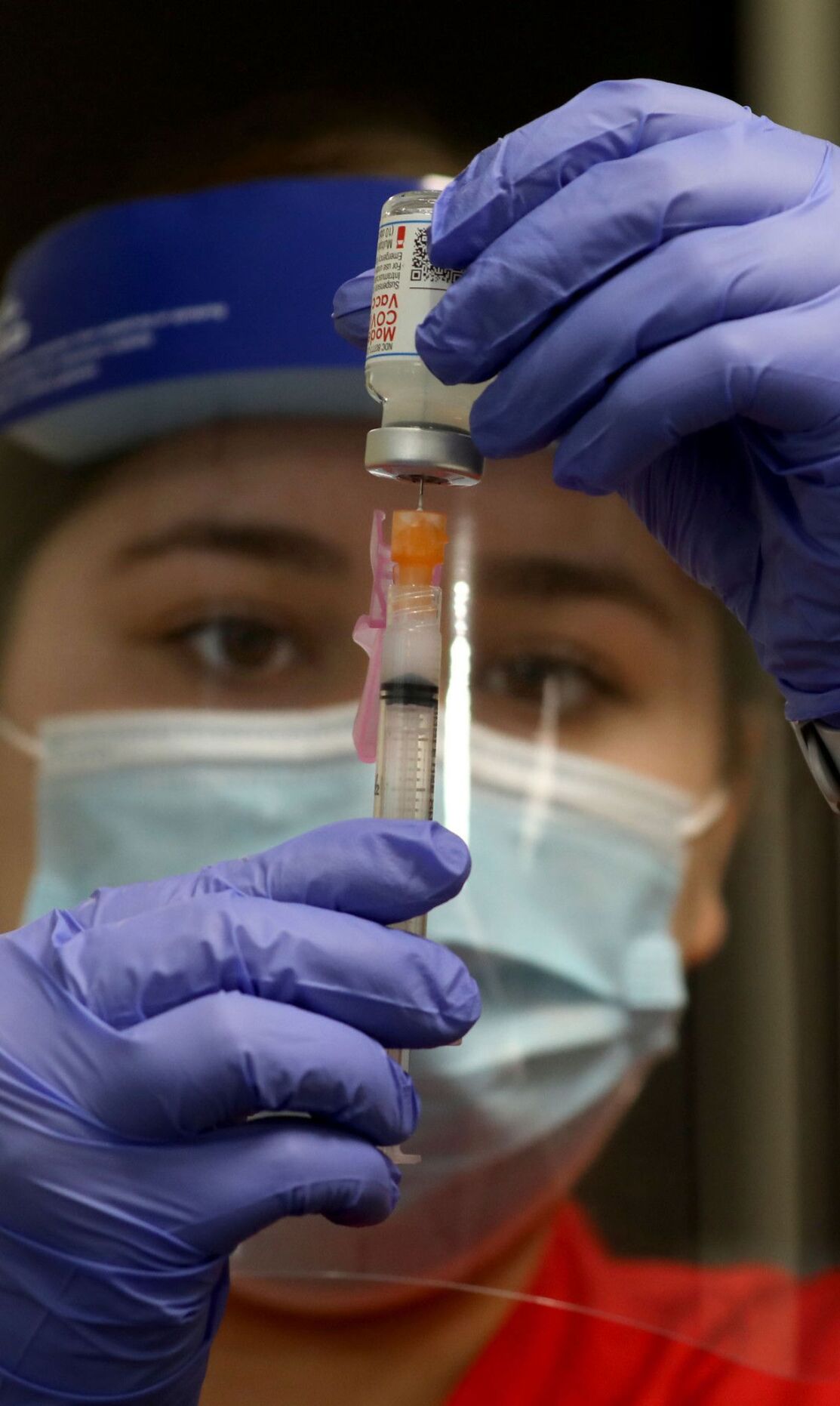 Nursing student Kaley Mesewicz, second from right, from the Lewis University College of Nursing, volunteers administering the Moderna COVID-19 vaccine to people at Will County Community Health in Joliet, Ill.

"I got my COVID-19 vaccine because..." postcards from people who had received their COVID-19 vaccines at Will County Community Health in Joliet, Ill., on Feb. 8. The cards were displayed in the front lobby area.

CHICAGO – Montrice Brown was a 46-year-old casino worker with a high-risk pregnancy when she decided to finally make a career change.

Brown always had nursing in the back of her mind, but it was her obstetrician’s care and encouragement while she was pregnant that inspired her to enroll in nursing school.

Now 47, Brown has a healthy 18-month-old daughter and is on the front lines of the COVID-19 pandemic as a nursing student who volunteers her time giving shots of the vaccine.

Brown’s unusual journey from casinos to nursing school has placed her in a key role in the state’s vaccine rollout: that of the volunteer.

Many counties, particularly small counties, do not have enough paid health care workers to staff vaccination clinics for hours every day, so they rely on volunteers to squeeze in time on days off, and before and after work, to help inoculate people against the deadly virus. The people stepping up are often doctors, nurses and students who give up their free time after long hours in classrooms, medical practices, ICUs, and ERs where they have battled the virus for the past year.

“There is a limited amount of (health care workers) right now,” said Nanci Reiland, a professor of nursing at Lewis University. “Nationwide and globally, we are seeing that.”

The state has deployed the National Guard to address this issue, and it has broadened the type of worker who can administer doses to include dentists and EMTs.

Health care workers have responded to the need for volunteers in droves, with people in the health care field taking the initiative to make lists of county vaccination sites and organize swaths of volunteers to respond where there is need. Schools are jumping in too, with students like Brown, who attends Lewis University, giving vaccinations in exchange for experience and in some cases, clinical hours.

The efforts have not been without logistical hurdles, though, as some doctors have reported onerous background check processes that have deterred some from volunteering.

‘We’d be in trouble’

Brown’s baby was 3 weeks old when she first started her nursing program at Lewis University, not long before the COVID-19 virus would become a global emergency.

As the virus spread, she lost friends and people who attended her church, including her pastor, Archbishop Lucius Hall, an influential South Side pastor who died in April. She watched as it disproportionately impacted the Black community, and doubled down on studying to become a nurse.

When she was offered a chance to give shots that will save lives, she jumped at it, finding free time outside of the classroom and caring for her children.

And the counties need the help.

Steve Brandy, public information officer for the Will County Health Department, said the department uses a mixture of volunteers and health department staff members to run its vaccination clinics.

Without the volunteers, the county wouldn’t be able to run mass vaccination clinics, particularly as counties hope to begin scaling up if they eventually receive larger numbers of vaccine shipments.

“We’d be in trouble,” Brandy said.

One of the biggest challenges has been the unpredictability of the vaccine shipments, meaning counties don’t have much notice before calling in volunteers, who have other life and work obligations. But Brandy said the White House has promised more transparency, which should mean they can schedule volunteers with more notice.

The Chicago Medical Society, a group of area physicians, has marshaled doctors who have expressed interest in volunteering.

“It’s a race against time,” said Dr. Vishnu Chundi, chair of the society, speaking about new COVID-19 variants that threaten to undo progress made so far in vaccinating against the virus. “People are already working hard. They want to work a little harder and get this done.”

RaeAnn VanGrundy, executive director of the Kendall County Health Department, estimated that it took about 140 volunteers working alongside staff to put on a vaccination clinic over a recent weekend.

“This is a massive undertaking,” she said.

A light at the end of the tunnel

Dr. Halleh Akbarnia spends much of her time in the emergency room at Advocate Condell Medical Center in Libertyville.

“It’s been all horrific stories and dealing with the worst parts of this pandemic,” she said, “watching people go through the worst moments of their lives.”

In her free time, Akbarnia has begun volunteering at vaccination clinics — and has found the experience therapeutic after an exhausting year.

“It helps me see the light at the end of the tunnel,” she said.

But because the vaccination rollout is so decentralized and varies across local health departments, Akbarnia said the process for volunteering has been beset by logistical barriers.

Some local health departments are asking for physicians to go through a fingerprinting and background process to give the vaccine, even though they already have valid Illinois licenses in good standing, Akbarnia said.

The Chicago Medical Society recently wrote to Gov. J.B. Pritzker to ask the state to waive these requirements and supersede the local rules to make it easier for doctors to volunteer at vaccination sites. A spokeswoman for Prtizker said the Illinois Department of Public Health has reached out to local health departments to urge them to remove unnecessary barriers.

But because counties have a need for volunteers, she made a list of county vaccination sites and contacts, and shared it with other health care workers looking to volunteer.

She began working with the Chicago Medical Society and a Chicago health care group called IMPACT, or Illinois Medical Professionals Action Collaborative Team, to pull together information about places that need help and create lists of potential volunteers.

She hopes to connect health care workers with volunteer opportunities because she has benefited from the experience.

“This is one of the most therapeutic things a person or a physician on front lines can experience,” she said, “the ability to vaccinate someone and get them essentially to safety.”