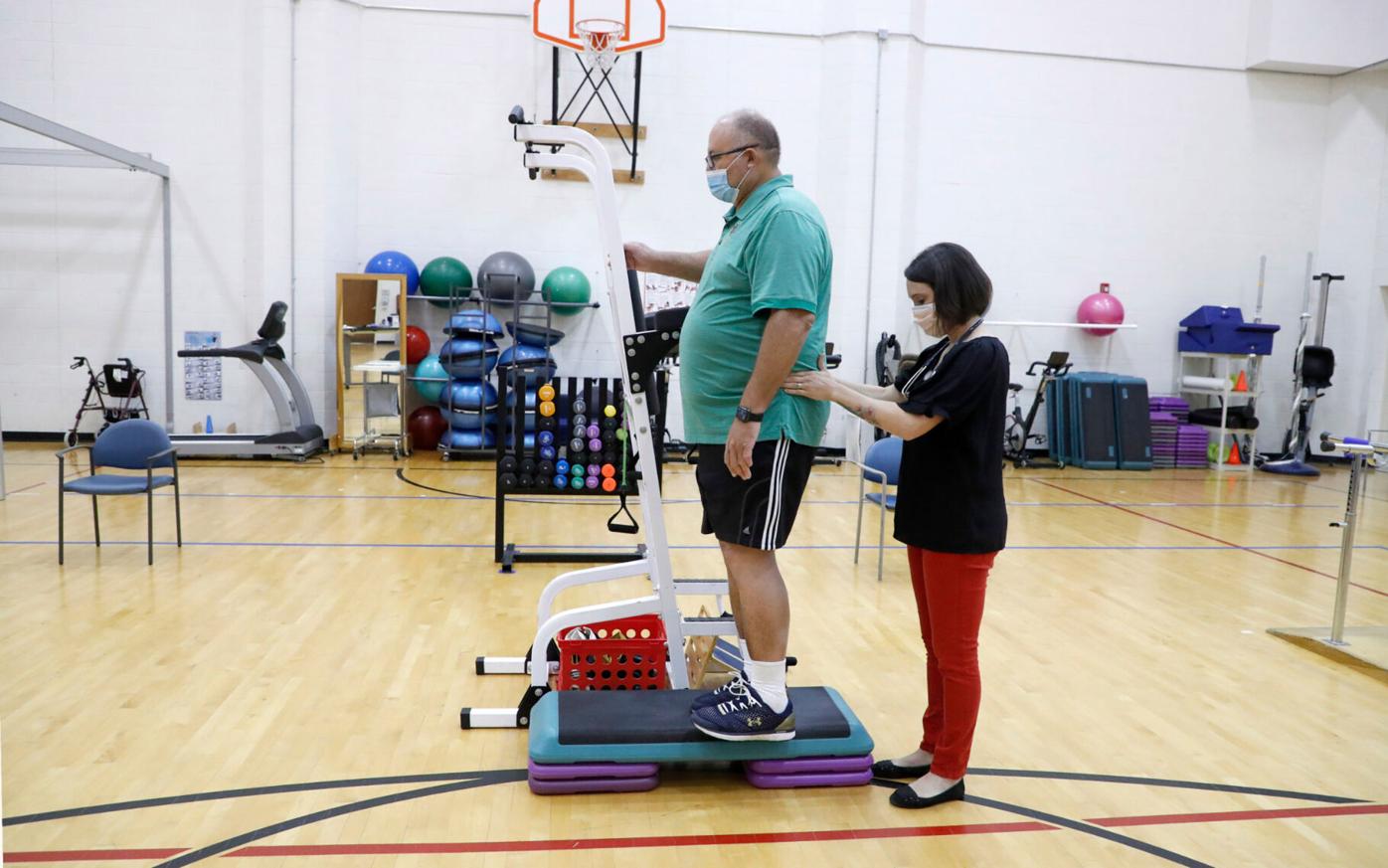 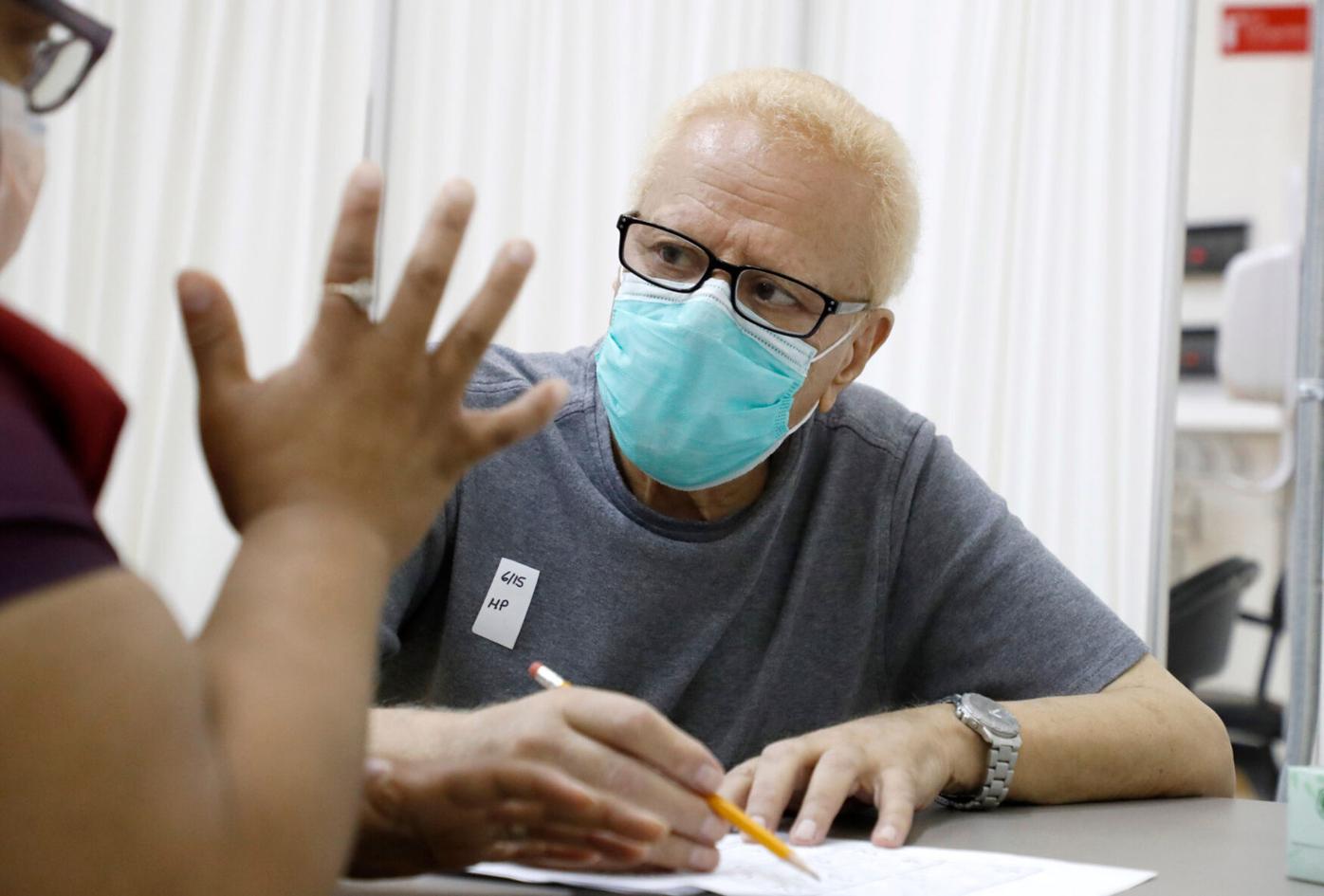 RALEIGH, N.C. — In a gym full of bar bells, stationary bikes and other work-out equipment, Nadar Atari is hunched over a table, pencil in hand, trying to finish a Sudoku puzzle.

The puzzle is part of Atari's rehabilitation after two months at WakeMed being treated for COVID-19, including 15 days in an induced coma with a breathing tube down his throat. Occupational therapist Amber Lewis sits across from Atari, occasionally suggesting he consider a row or column where he might have an easier time figuring out what numbers are missing.

"Good job. Brain push-ups at its finest," Lewis says when Atari fills in the final empty box in the grid. "Definitely faster than the first one that you did."

Atari, 78, has come a long way. When doctors removed the breathing tube in WakeMed's intensive care unit, he couldn't walk or move his hands and had lost his memory. "I was totally crippled," he says.

Atari spent some time in a rehab unit at WakeMed before he was sent home on May 28. He had regained the use of his hands and could get around with the help of a walker. He began what's expected to be six weeks of outpatient visits to WakeMed's rehab hospital to try to regain what COVID-19 had taken away.

More than 45,500 North Carolinians have recovered from COVID-19, the state Department of Health and Human Services estimated Monday. That figure is based on the assumption that people who test positive for coronavirus will recover in 14 days if they aren't sick enough to be hospitalized and in 28 days if they end up in a hospital.

But actual recovery times can vary widely. Some people have only mild flu-like symptoms or no symptoms at all. But others like Atari spend weeks fighting off the infection then weeks more working to overcome the damage caused both by the virus and the days on a mechanical ventilator under heavy sedation.

Coronavirus attacks the cells lining the lungs, leaving scarring that can continue to reduce a person's ability to breathe and take up oxygen even after they recover, said Naomi Bauer, who directs WakeMed's outpatient cardiopulmonary rehab program. Spending days or weeks immobile also takes a toll on patients, Bauer said.

"They get muscle weakness. Their endurance gets decreased. Their balance gets decreased. They have trouble breathing," Bauer said. "And then with the damage to their lungs, they may have trouble getting enough oxygen into their body. And so all of those things combined mean that they're really not able to do the level of activity they were doing before getting sick."

WakeMed now has a half dozen COVID-19 patients taking part in outpatient rehab, ranging in age from 28 to 78. They're working to regain strength and balance they lost in the hospital and in some cases adapt to the inability of their lungs to take up as much oxygen as before, Bauer said.

"What we can do is through the exercise training we actually make the rest of their body more efficient, and then they can do more activity with less oxygen," she said. "So they're able to overcome that lack of oxygen and still be able to do their activities that they were doing before."

COVID-19 affects the brain, too

Atari, who taught medical imaging and radiology at medical schools in the Middle East and Virginia before retiring to Cary, is now able to walk and climb stairs without the walker. But while his memory returned, he still lacked the focus and concentration he will need to do complex tasks such as driving a car. Which is where the Sudoku comes in.

Lewis says she would normally have a patient work on a puzzle in a quiet room, but for Atari she chose the gym where others are working out and moving around.

"He needs all of the other activity that's going on so he can learn to wean it out," she said. "He really has to be focused on what we're doing and still be mindful of what's going on and be able to have that divided attention."

A few feet away, Stan Cherry is going through a series of step exercises with physical therapist Tiffany Champion, to help fine-tune his strength and balance.

Cherry, 51, spent nearly three weeks at WakeMed, including 10 days on a ventilator in an induced coma. When he went home, he still needed help getting up off the couch and walking and had tremors in his hands that made simple tasks like adjusting his glasses difficult.

Cherry also had trouble finding or enunciating words and with other executive function skills. On one of his first days back at work at a business consulting firm he says he uncharacteristically "dropped an f-bomb" during a phone call.

Like other COVID-19 patients, Cherry and Atari both say they emerged from induced comas on the ventilator with vivid memories of dreams or experiences that seemed real, even as they couldn't recall what had happened to them in the hospital. Cherry, for example, says he was sure he had spent time with a dear friend who died of cancer last year and was buried with military honors at Arlington National Cemetery.

"I remember asking my wife, I was all shook up. I said, 'Did Dan really die?'" he said. "And she's like, yeah, he really did die. And then she helped me remember that we went to Arlington and the whole procession and all of that."

Neither Atari or Cherry had flu-like symptoms before testing positive for coronavirus. Cherry found himself constantly exhausted and eventually spiked a fever of 103 degrees Fahrenheit. After going to the emergency room at WakeMed North, X-rays showed that he had double pneumonia, even though he hadn't been coughing or had shortness of breath. Two days after testing positive for coronavirus, he was in the intensive care unit at WakeMed's main campus.

He's not sure where he contracted the virus; his wife, grown son and daughter and son-in-law all tested positive but never got sick. He doesn't think that's a reason for people to be cavalier about coronavirus.

"I hear these stories of people that are like, 'Well I had it, I tested positive, and it was just like having a cold.' And I'm like, 'Congratulations. That wasn't what happened to me,'" he said. "They don't have wings of hospitals or separate emergency rooms for people that have colds, you know? It's deadly. It's serious."

Atari thinks he may have contracted the virus during one of two visits to Costco in March, before people were wearing masks and were as diligent about sanitation and social distancing. He initially went to the hospital because he had difficulty urinating and thought he might have a problem with his prostate.

In addition to his age, Atari has had three heart attacks and open heart surgery, the kind of pre-existing medical conditions that would make him vulnerable to the effects of coronavirus.

"With this history, I'm a very good candidate to die," he said. "But really with God's grace, I managed, in fact, to survive."

Now Atari is working to sharpen his focus and concentration, with the help of Lewis and Sudoku, a puzzle he had never played before getting sick. Just as with walking and using his hands, he says he can feel that coming back, too.

"I used to have very sharp memory, very sharp focus. But I'm getting there," he said. "I've improved quite a lot in that. I'm looking forward to being able to drive."