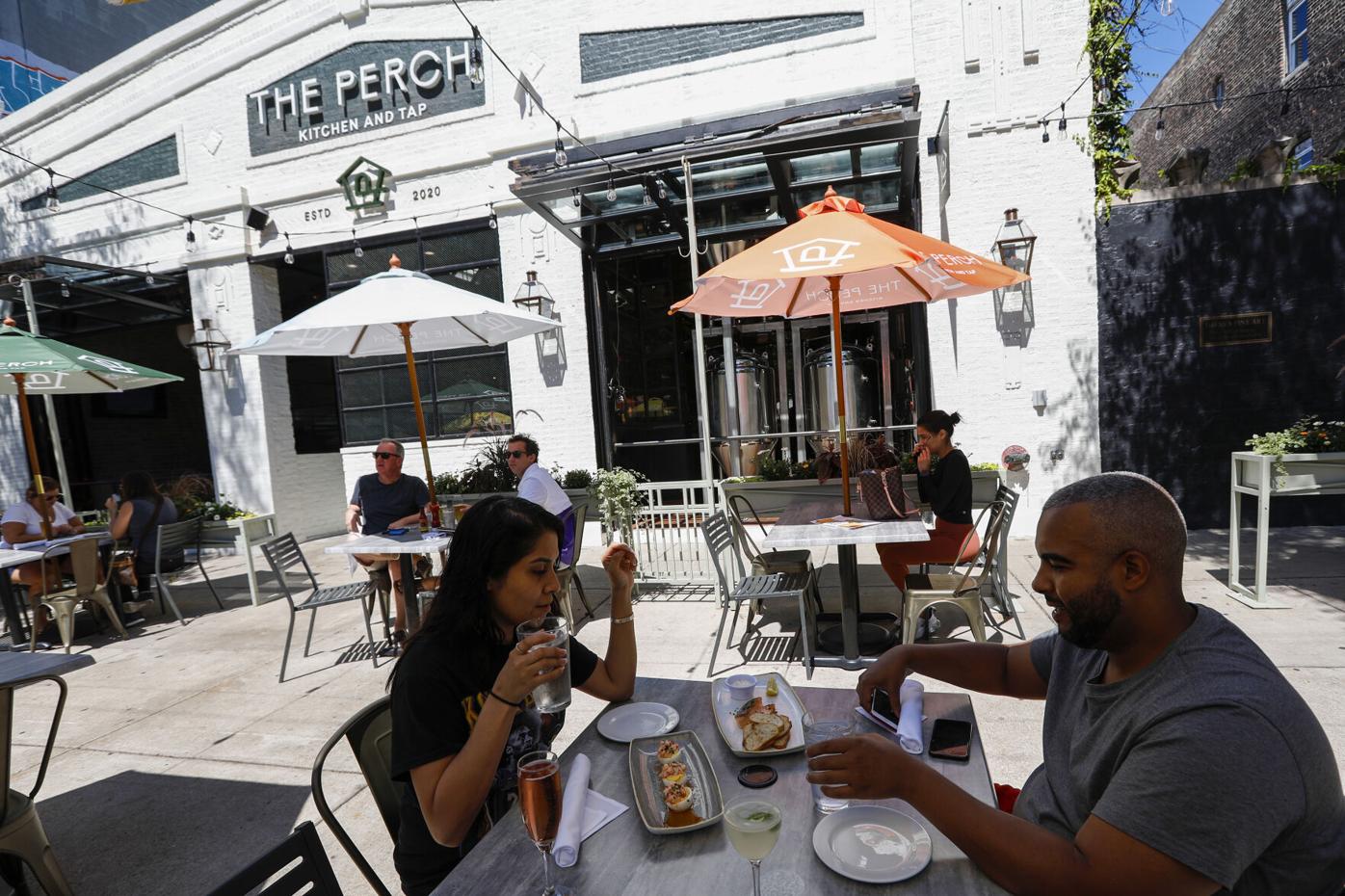 Jennifer Martinez and her boyfriend Omar Zamora have lunch on the patio at The Perch Kitchen and Tap in Chicago. Because of the pandemic, more restaurants are likely to invest in patios and to-go windows. Curbside pickup also could remain a fixture. 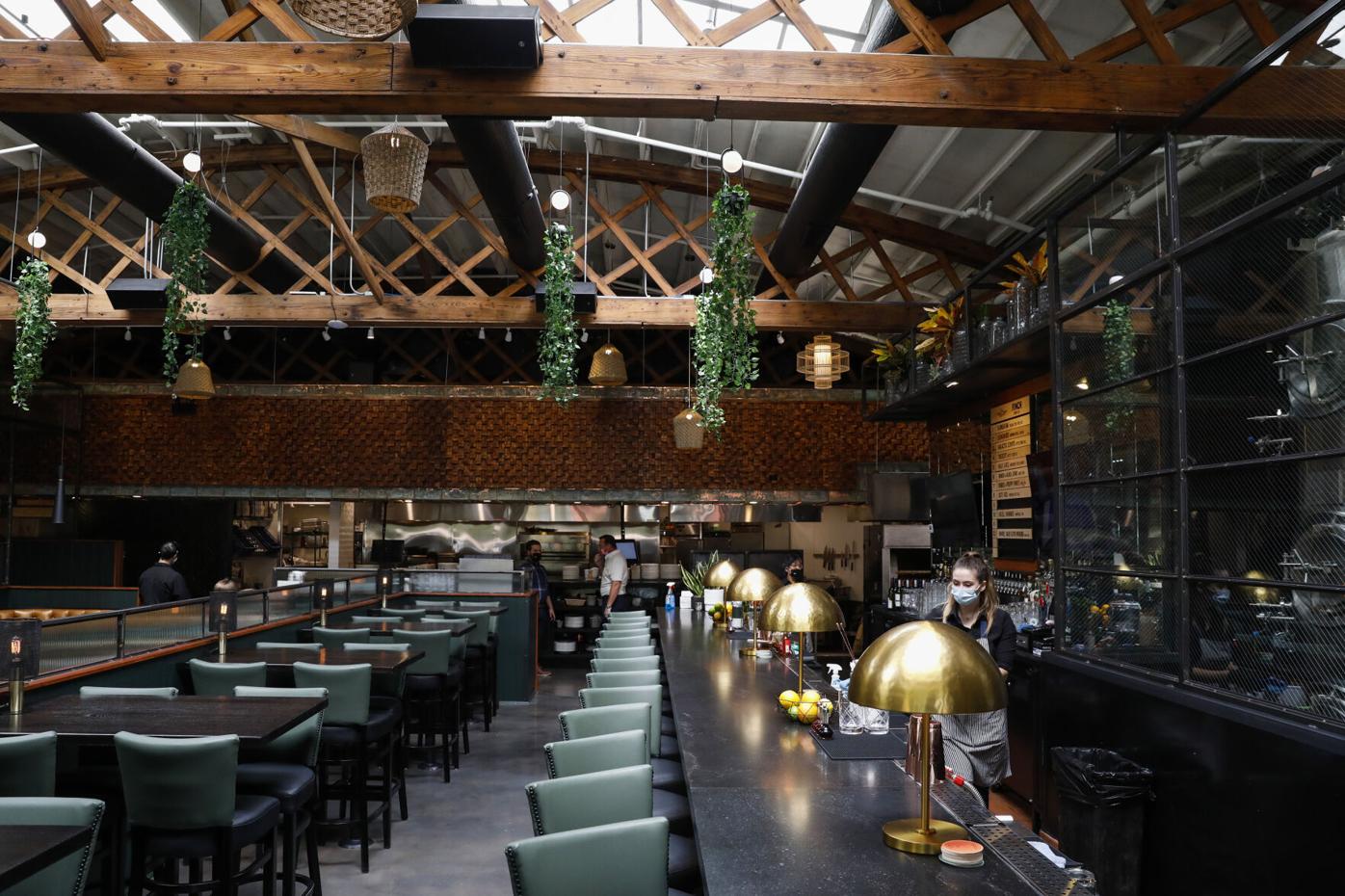 The large HVAC ducts on the ceiling at The Perch in Chicago circulate more air through the restaurant. 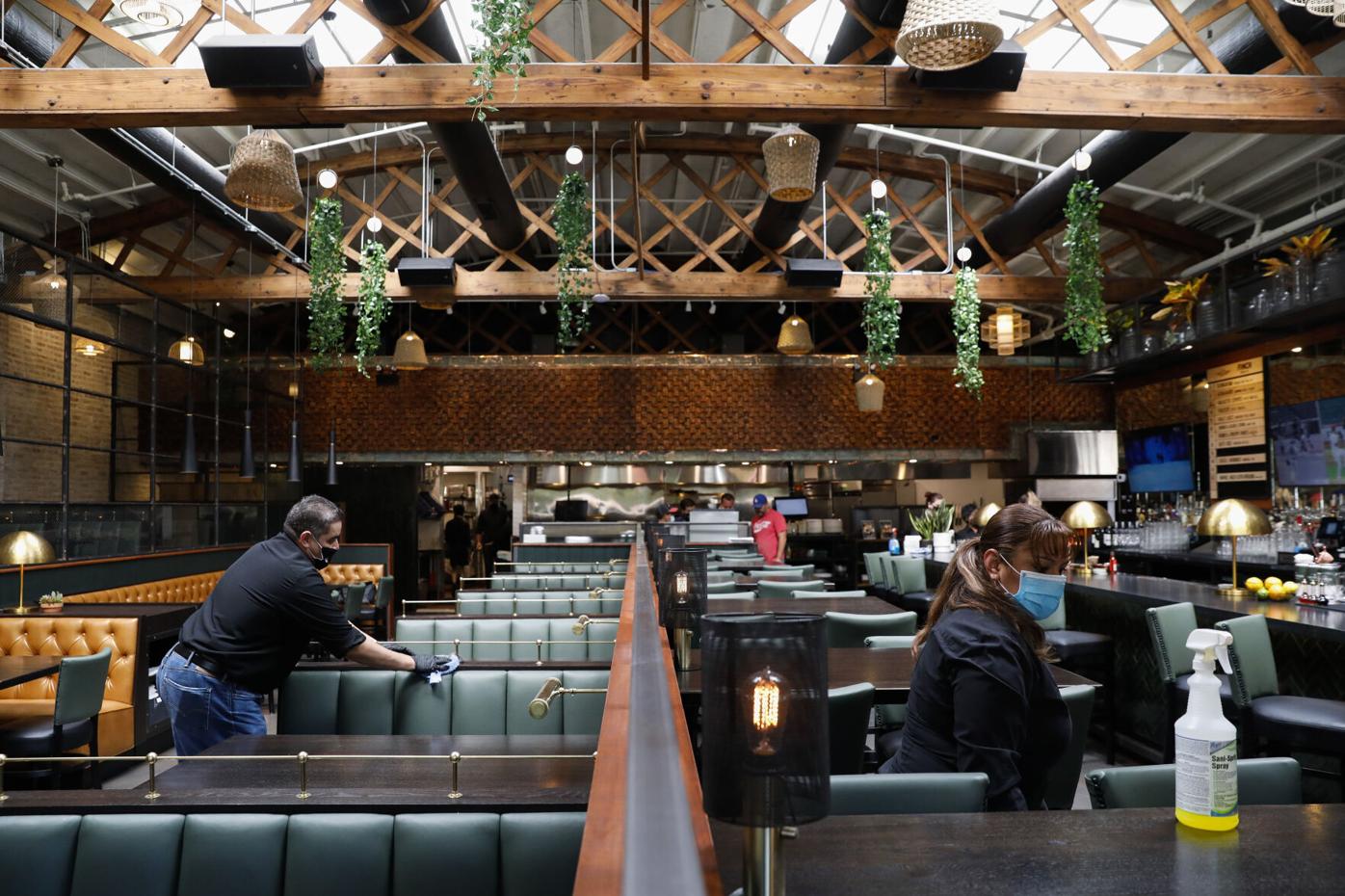 Donovan Martinez, left, wipes down booths as Laura Salas wipes down chairs in the dining area at The Perch Kitchen and Tap.

Jennifer Martinez and her boyfriend Omar Zamora have lunch on the patio at The Perch Kitchen and Tap in Chicago. Because of the pandemic, more restaurants are likely to invest in patios and to-go windows. Curbside pickup also could remain a fixture.

The large HVAC ducts on the ceiling at The Perch in Chicago circulate more air through the restaurant.

Donovan Martinez, left, wipes down booths as Laura Salas wipes down chairs in the dining area at The Perch Kitchen and Tap.

CHICAGO — The Perch Kitchen and Tap was six weeks into construction when everything Doug Dunlay knew about opening restaurants was thrown into doubt.

Dunlay has owned restaurants in Chicago since 2003, but in a literal matter of days, COVID-19’s swift hammer changed best practices for designing, building and launching them.

Construction slowed at The Perch for a few days after Gov. J.B. Pritzker shut down the state’s restaurants in mid-March. But it quickly ramped up again with a tweaked vision.

The Perch added 30% more HVAC ducts “to refresh and filter the air in an efficient and positive way,” Dunlay said. A patio planned for the summer of 2021 was fast-tracked for this summer. A walk-up bar was built facing Division Street so that customers could order drinks without going inside. Touch-free fixtures were added to bathrooms. A hand-washing station was built in the back of the dining room.

Dunlay said the additions were necessary not only for the present, but for the foreseeable future.

“It’s an added cost, but even if we miraculously go back to normal by March, I think some people will still be scarred — or newly formed germaphobes — and we want to make sure people feel comfortable,” Dunlay said. “That’s going to be a major component of how and where people want to spend their money.”

CONCEPT OF DINING OUT

For generations, dining out has rarely occupied a second thought. Restaurants have been there and we have flocked to them — all the way to a record $863 billion in 2019 sales, according to an estimate from the National Restaurant Association.

But due to the pandemic and shifting attitudes about health and safety, elements once taken for granted (squeezing into cozy spaces) or rarely given second thoughts (ventilation) will take on greater meaning for perhaps years to come. Restaurants in all directions are left to re-evaluate the mechanics of their operations during the health crisis and beyond.

Some have decided they can’t make it in this new world. When one of Chicago’s forerunners of modern fine dining, Blackbird, announced in June it would not reopen, chef Paul Kahan cited the challenges of operating an “incredibly small, tight dining room.”

Mindy Segal, who sped up plans to close her popular Bucktown restaurant HotChocolate after the pandemic struck, suspects the pre-pandemic dining model driven by large, crowded spaces is finished. COVID-19 and evolving social priorities have likely killed it, she said.

“I feel for people with large restaurants, but there’s something to be said for intimate dining and we need to bring it back,” Segal said. “We were in a bubble and the bubble needed to burst.”

Think of it like the 9/11 attacks and flying: Nearly 20 years later, most travelers remove their shoes and submit to full body scans. Only ticketed passengers are able to access airport gates. While the attacks didn’t end flying — until the pandemic, millions of people still flew every day — it profoundly changed the experience.

Dining out may travel a similar path: People will inevitably still eat out, but the experience may never quite be the same.

Menus? Those are likely to continue to lose popularity in favor of the suddenly-hot QR codes.

Greater investment in patios and to-go windows are likely here to stay. Curbside pickup could remain a fixture.

Access to hand sanitizer may endure. Pricey ventilation systems are already becoming a means to attract business and windows of all shapes and sizes that can be opened and closed may become a necessity rather than a luxury.

Dining room design will rely ever more on practicality and flexibility. In some cases fixed, cozy floor plans with immovable furniture may no longer be tenable. In others they’ll be useful.

Before the pandemic, Revolution Brewing had envisioned ripping out six high-back booths from its brewpub to create more space for congregating near its bar. COVID-19 changed those plans.

“We wanted more standing space so people could huddle together,” said Meg Rutledge, Revolution’s director of retail operations. “Then a switch flipped and that was exact opposite of what we needed.” The booths, and the intimate spaces they provided, stayed.

In ways big and small, restaurant operators will need to make similar calculations for the foreseeable future.

“What’s happening will force us to reconsider how we can do things better and to be more deliberate,” said Karen Herold, principal of Studio K Creative design firm, whose projects have included Girl & The Goat, Maple & Ash and GT Fish & Oyster.

But there are as many questions as answers about how to proceed.

The grand gestures of the moment, such as private outdoor dining pods and Plexiglas between tables, strike Herold as gimmicks that won’t last.

The pandemic also will likely lead to more thoughtful and dynamic outdoor spaces with improved layouts, temperature control, landscaping and furniture: “A much heavier investment in your patio experience instead of treating it as an afterthought, which is most Chicago patios,” she said.

Charlie Vinz, principal at architecture and design firm Adaptive Operations, said while stopgap measures such as Plexiglas between tables, won’t last, “designers could play off that to some extent” going forward, such as “private booths as an extension of barriers between tables.”

Entire business models may also need to be revisited to accommodate fewer customers, which could result in higher prices. But whether that revised equation will be enough to keep businesses afloat remains to be seen, he said.

“Almost more than any other industry — except maybe for the live arts and music venues — bars and restaurants will have the hardest and longest fallout.”

"What's happening will force us to reconsider how we can do things better and to be more deliberate." — Karen Herold, principal of Studio K Creative design firm