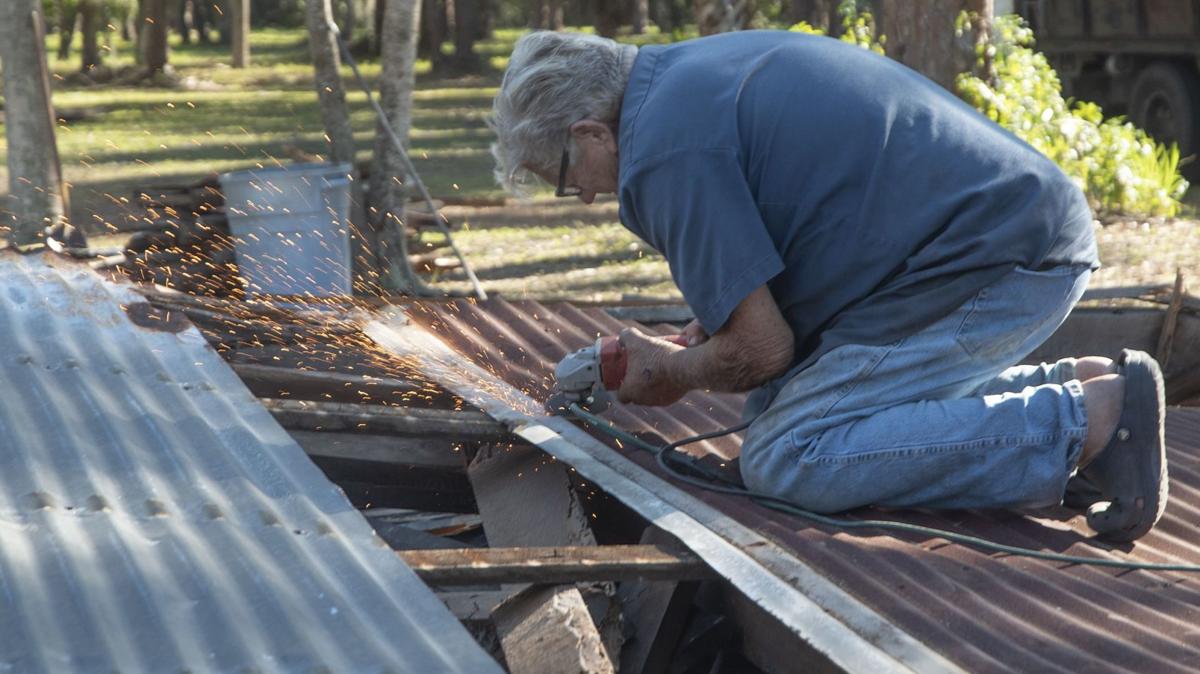 Dale Galvin grinds nails from roofing along Old Englewood Road. Some of the roofing will be used to create artwork by artists Lisa McQueen and Gary Carlberg. 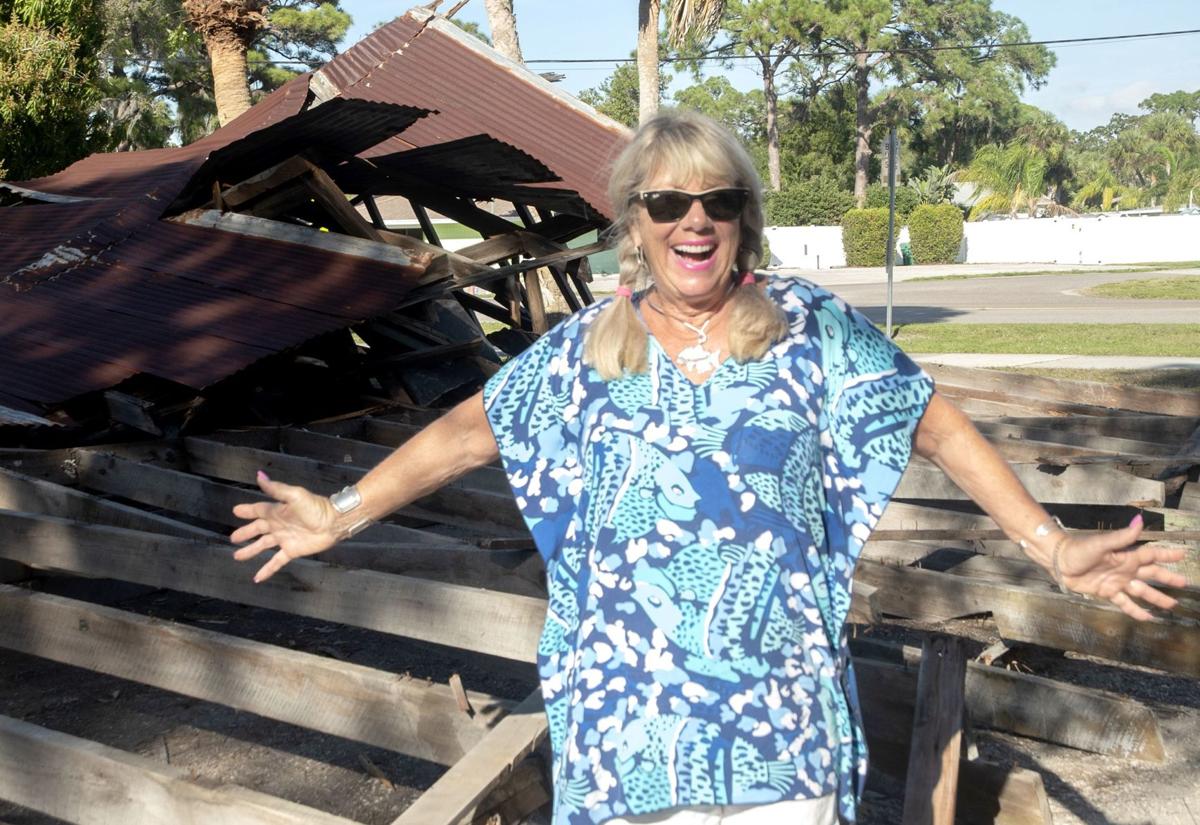 Artist Lisa McQueen holds out her arms in joy as she awaits metal roofing to take to her studio after the barn along Old Englewood Road was demolished. 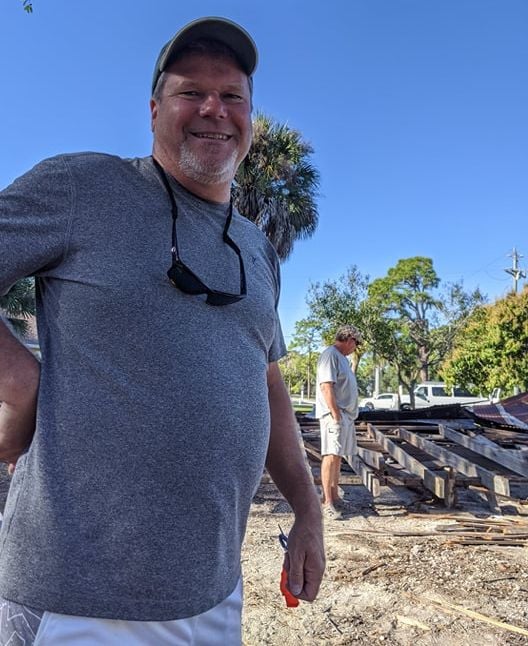 Gary Carlberg asked to have some of the wood from the tin barn. He plans to make custom cutting boards. 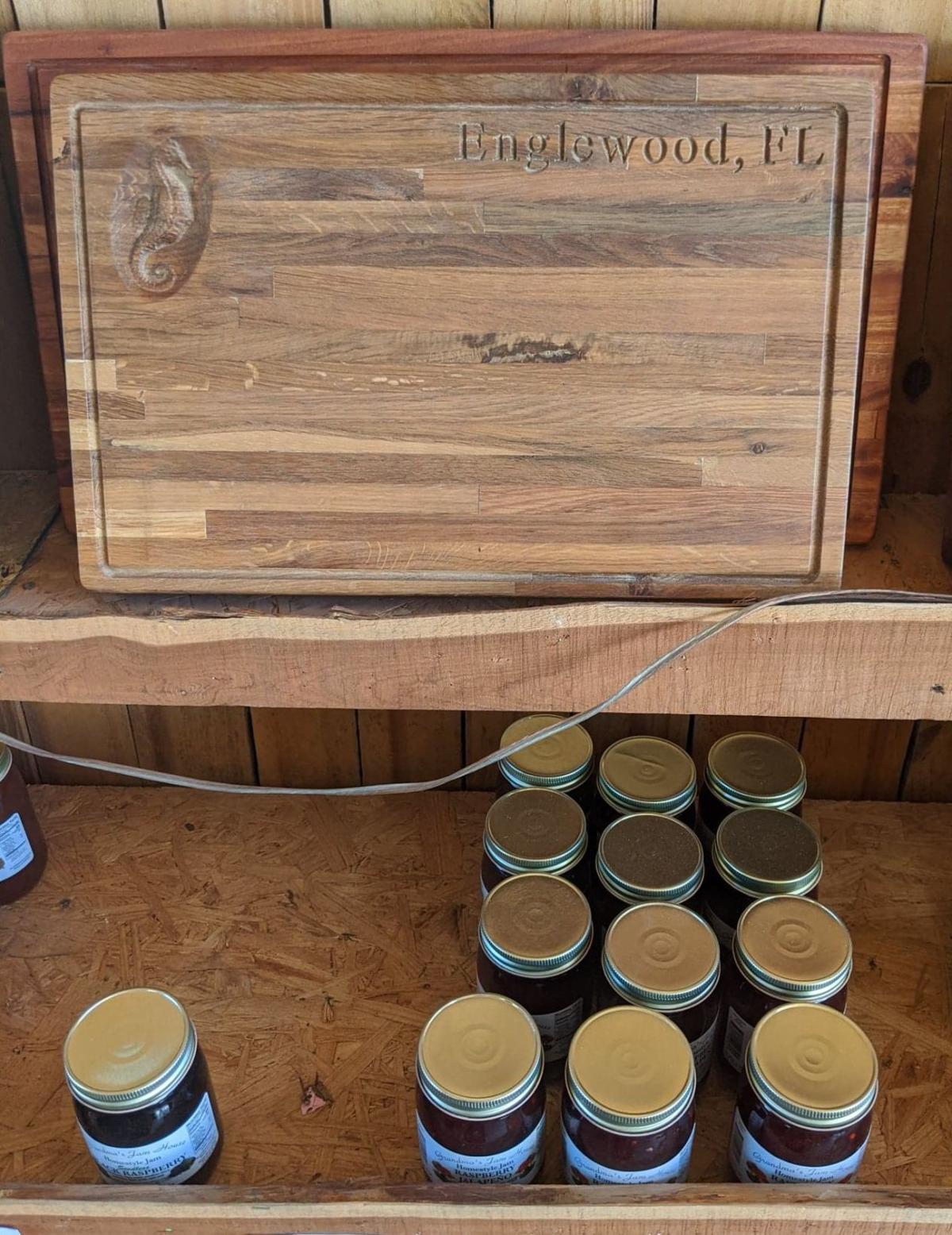 Dale Galvin grinds nails from roofing along Old Englewood Road. Some of the roofing will be used to create artwork by artists Lisa McQueen and Gary Carlberg.

Artist Lisa McQueen holds out her arms in joy as she awaits metal roofing to take to her studio after the barn along Old Englewood Road was demolished.

Gary Carlberg asked to have some of the wood from the tin barn. He plans to make custom cutting boards.

“An old car savage yard was near the barn and people would drop off cats there all of the time,” Parks said. “We would have plenty of kittens to play with while we waited for the bus. That was back when there was chicken and bobcats.”

Parks recalled other activities centered around building locals called the “old tin barn” as it was torn down last week.

While locals have expressed sadness that it was demolished, some of the old barn will live on, thanks to artists who see beauty in its remains.

“People are stopping by asking for a piece of it because it’s a part of their childhood,” Parks said. “It was a part of my life. This is my grandmother’s homestead. My mother was born in 1924 and was raised here.”

The barn was originally built in 1920. Its current owner Dale Galvin, 76, and his son, David, dismantled it last week. It was no longer structurally sound and not safe.

Parks said once the word got out the old barn was coming down, people reached out to her and the Galvins. One man wanted parts of it to put inside his man cave.

“I had former Lemon Bay High School students asking about it,” she said. “Dale has been giving a bit of history about it. He told people it was once a brothel, but he was just joking. It’s a little bit of Englewood humor. But it once had a little store inside. It was a welding shop and garage. People used to live upstairs in the barn.”

Although many of the wooden beams are rotted and broken, there is a lot worth salvaging, according to two artists.

On Friday, resident Gary Carlberg asked David for the 100-year-old wood from the old barn that survived Hurricane Irma in 2017.

“This is heart pine wood that was from South Georgia or from around here, at least 100 years ago before it was used to build the barn,” Carlberg said. “The center of this kind of wood is big. These beams are 25 feet long. It’s probably a first-generation heart pine. You can’t find wood like this anymore. But you do see it in old churches.”

Carlberg spends hours on woodworking hobby. He makes custom cutting boards, many with the words “Englewood,” “Venice” “North Port” or “Osprey” on them. He sells them for $64.99 at Rhoades Produce in Englewood.

“I will make a lot of cutting boards and cheese boards from this wood,” he said. “I make sea turtles and dolphins on the boards. I’m pretty excited about getting this wood.”

For Lisa McQueen, also known as Queenie, seeing the old barn come down meant an opportunity to repurpose some of the metal into something new.

“For the last six years that I visited my friend Margie Parker in Englewood, I have passed this barn,” said McQueen whose business is Queenie Tin & Fish Co. “The barn was like a magnet for me. I was drawn to it because the metal is so fabulous. I love the ones with moss on them, and on the backside too. I’m goosie over this new find.”

Seven years ago, after McQueen moved from Indiana to Florida, she began making ocean art from metal. She repurposes tin and metal from salvage yards. Today, her works are for sale at the Old Florida Outdoor Center and Gallery. She’s also has a booth at the Dearborn Street Farmer’s Market from 9 a.m. to 2 p.m. on Thursdays in Englewood. She has a gallery in Punta Gorda.

“I’m best know for my mermaid work,” she said. “Each piece is different. I make sea turtles, octopus, tribal turtles, seahorses and tarpon.”

She promised the Galvins a nice-size tarpon valued at more than $500 as a gift for the old tin.

“Like they say, one man’s junk can be turned into another man’s treasure,” McQueen said.