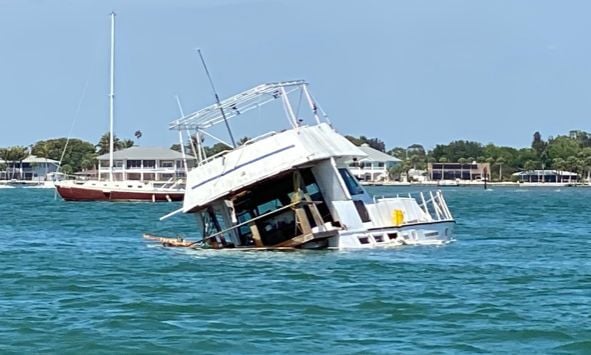 A boat in Chadwick Cove sank Sunday. It can’t be removed by Charlotte County for 21 days. The county must allow due process for the owner to remove it. 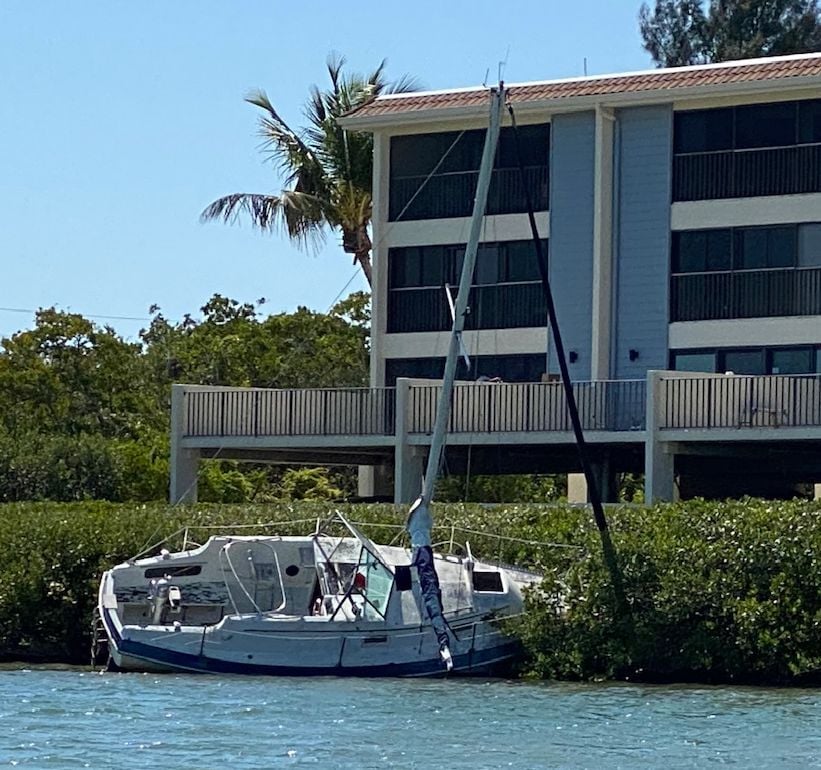 A derelict sailboat near Sandpiper Condominiums is an eyesore, say local residents. 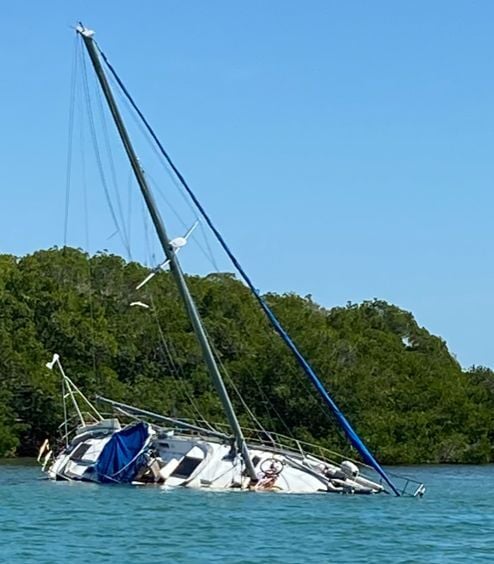 Another sailboat in Chadwick Cove is slated to be removed in the near future. 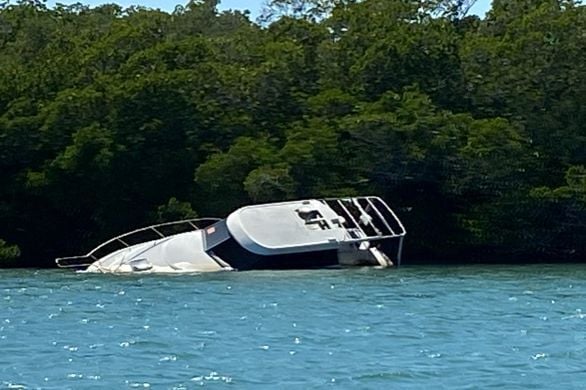 Englewood residents are used to seeing sinking boats in Chadwick Cove as owners often abandon them there. Residents often have to alert the county of the derelict boats.

A boat in Chadwick Cove sank Sunday. It can’t be removed by Charlotte County for 21 days. The county must allow due process for the owner to remove it.

A derelict sailboat near Sandpiper Condominiums is an eyesore, say local residents.

Another sailboat in Chadwick Cove is slated to be removed in the near future.

Englewood residents are used to seeing sinking boats in Chadwick Cove as owners often abandon them there. Residents often have to alert the county of the derelict boats.

ENGLEWOOD — Lemon Bay’s Chadwick Cove is a place where many boats go to die. But now there’s a twist.

Last year, the owner of one of the now-abandoned boats died. On Sunday, the Chris-Craft sank, leaving the county and residents in limbo.

“The boat will eventually be removed, but it has to go through due process regardless if the owner is alive or not,” said Roger De Bruler Jr., the Charlotte County Marine Resources specialist who oversees the derelict boat program. “The death was considered a homicide so it had to be investigated last year by the (Charlotte County) Sheriff’s (Office). Next of kin had to be notified.

“We waited and learned the boat owner had a relative in Texas,” he said. “We had to see if that person or other local relative would remove the boat before it’s considered abandoned. We found a relative who lives in Englewood, but he has no controlling interest in the boat. So now we wait.”

De Bruler said it’s like a having a vehicle that dies on the side of the road.

“The police give three days to remove it before it’s towed,” he said. “With a boat, the state gives more time because it’s a larger vessel.”

Legally, the county must give the owner 21 days to fix or remove a boat or face penalties. Derelict boats are an environmental hazard and safety concern, state and local officials have said.

De Bruler said the boat didn’t have an engine so the owner’s friends towed the vessel from one spot to another along Chadwick Cove. As it sank, traces of fuel could be smelled but was not deemed an environmental hazard by authorities, De Bruler said.

De Bruler said much like the newly abandoned boat, each one in Chadwick Cove has a story behind it. He’s working on removing several, including two sailboats stuck in mangroves after running aground.

“Residents from the Sandpiper Key Condominiums called me because the boats are an eyesore,” he said. “There’s five we get out of there. Three are ready for the towing contractor.”

“They either cannot afford proper care, maintenance and storage of a sea-going vessel, or those who refuse to pay for it,” Bigness said. “Having these non-functioning boats here is a navigation hazard for various reasons, one being the big boat is in the channel, and to my knowledge no lights on the sunken boats and even some of the others there.

“It’s also an environmental hazard when they sink with all the various fluids, human waste and toxic chemicals carried on most boats that are typically used in the operation of a boat like engine oil, transmission fluid, diesel or gasoline, sewage and battery acid,” he said.

After Hurricane Eta in November, De Bruler, saw an increase in derelict boats from Chadwick Cove to Charlotte Harbor. However, he reduced them from 24 two years ago to eight.

De Bruler said in the early months of the pandemic last year, the state gave 45 days to remove boats. A year and a half ago, Gov. Ron DeSantis signed a new law, which studies the impact on the environment specifically where these boats are left behind, and adds a continuous grant to fund derelict boat removal.

De Bruler said while he hasn’t applied for a state grant, there are three pots of money available to Charlotte County for boat removal.

“We (the county) teamed with West Coast Inland Navigation District Executive Director Justin McBride to handle any case during the shutdown,” De Bruler said. “Those cases were funded by WCIND through the FWC. We also get money from the Marine Advisory Council. Tax money is collected from the state boater improvement fund for fuel, bait, tackle and fishing gear. A small portion of that fee comes back to the county. Also WCIND taxes everyone in the county a percentage.