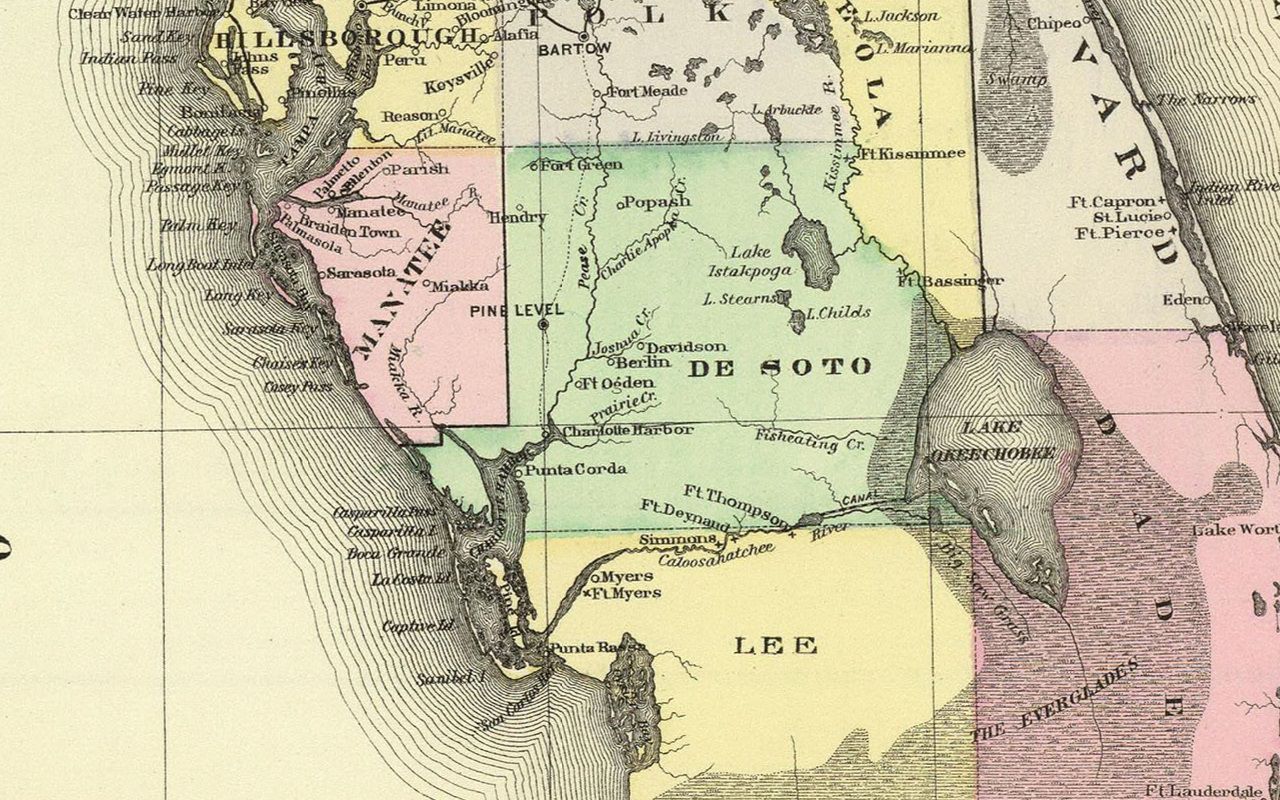 This portion of an 1890 map of Florida, published in Samuel Augustus Mitchell Jr.’s world atlas, shows the area when Charlotte and Sarasota counties were part of DeSoto and Manatee counties, respectively. 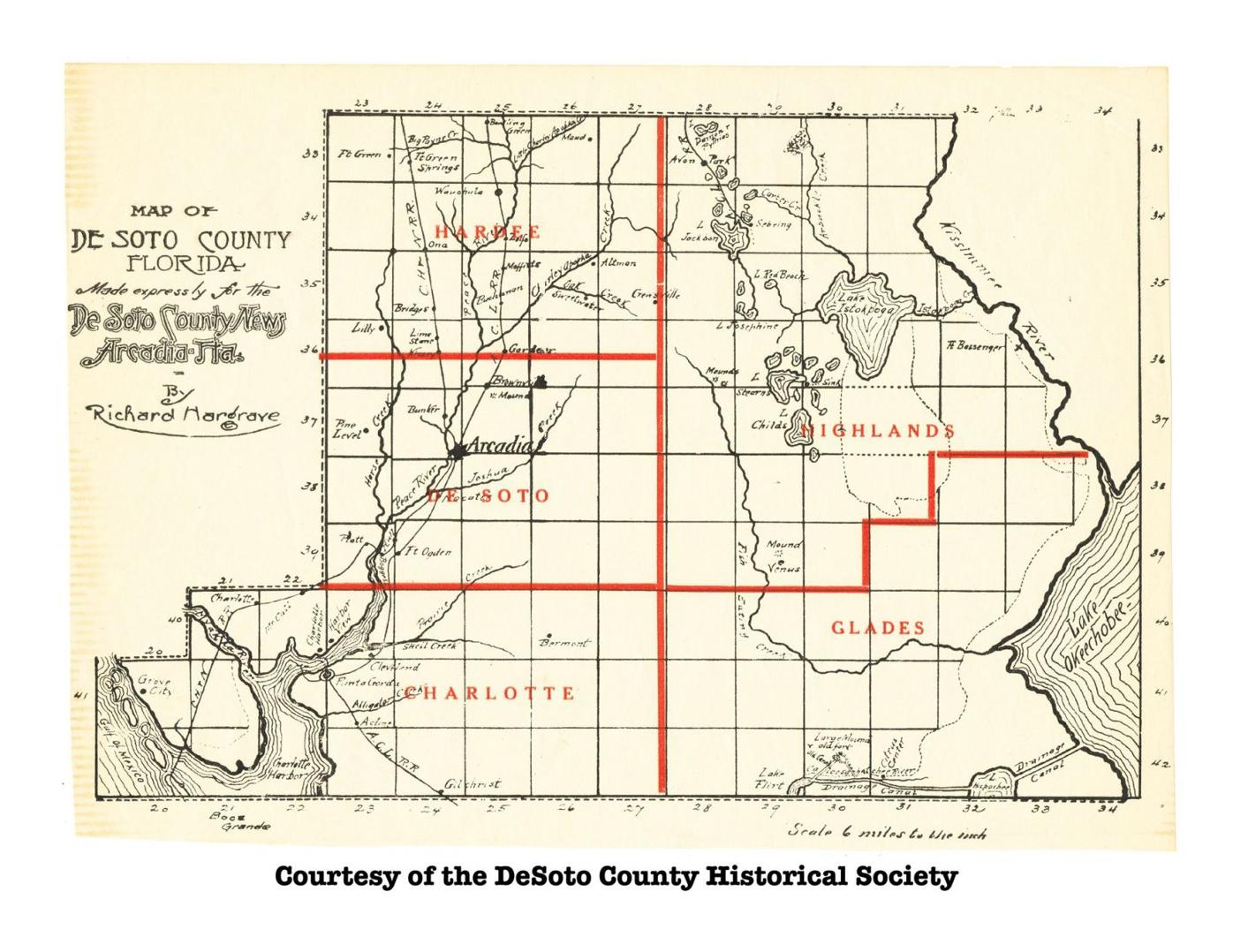 This map shows how DeSoto County was divided into five counties in 1921. That year, the state created Charlotte, Glades, Highlands and Hardee counties, along with a much smaller DeSoto County.

This portion of an 1890 map of Florida, published in Samuel Augustus Mitchell Jr.’s world atlas, shows the area when Charlotte and Sarasota counties were part of DeSoto and Manatee counties, respectively.

This map shows how DeSoto County was divided into five counties in 1921. That year, the state created Charlotte, Glades, Highlands and Hardee counties, along with a much smaller DeSoto County.

Birthday candles may be in high demand next year as Charlotte, Sarasota, Hardee, Glades and Highlands counties prepare to celebrate their centennials.

Charlotte County Centennial partners is setting a planning meeting for 5:30 p.m. July 29 at Tringali Park Community Center, 3460 N. Access Road, Englewood. The meeting will include an update on plans to commemorate the April 23, 2021 Centennial anniversary, and the public is invited to find out what’s going on.

Community groups and organizations are also encouraged to share ideas for the centennial, or any projects they are working on and to coordinate activities with the county.

At least one big event is already on the books. A Centennial Ball is scheduled 7 p.m. April 23, 2021, at the Charlotte Harbor Event & Conference Center in Punta Gorda. Ticket sales to be announced.

The Charlotte County Centennial website, www.CharlotteCounty100.com, provides historical information about the county and features a central calendar of events submitted by community groups. People can also sign up to receive emails about the Centennial. A Facebook page, www.facebook.com/ CharlotteCounty100, allows people to share information, events, photos and videos.

Actually, Charlotte shares its anniversary with neighboring Glades County, along with Hardee and Highlands counties. All four of the new counties were carved out of what was a much larger DeSoto County by an act of the Florida Legislature in 1921.

DeSoto County first became a county in 1887 when the state divided giant Manatee County in half. Originally, DeSoto was 3,750 square miles, extending from Charlotte Harbor east to Lake Okeechobee, from the Polk County line in the north to Lee County in the South.

While Charlotte and the other counties were being subdivided from DeSoto, Sarasota sought its independence from the smaller version of Manatee County at the same time.

Community leaders battled their colleagues in Manatee County for years before they achieved their independence with the creation of Sarasota County in 1921, according the research of Frank Cassell in his “Creating Sarasota.” Cassell also serves on the Sarasota County Centennial 2021 Steering Committee.

The road to independence for Sarasota County was literally a battle for better roads and transportation, as well as ensuring for Sarasota an economically viable future.

All of the newly created counties in their infancy had to govern through the heyday of the 1920s Florida Land Boom, and then the subsequent real estate bust. And, of course, the Great Depression, which started in 1929.

Like Charlotte County, Sarasota County intends to celebrate its centennial.

“The details still being worked out at the moment,” Sarasota County spokesman Drew Winchester said Thursday.

Updates and events are available on www.sarasotacountycentennial.com. A free Centennial Celebration Kick-Off is planned for 11 a.m. to 4 p.m. Jan. 9, 2021, at Phillippi Estate Park in Sarasota.