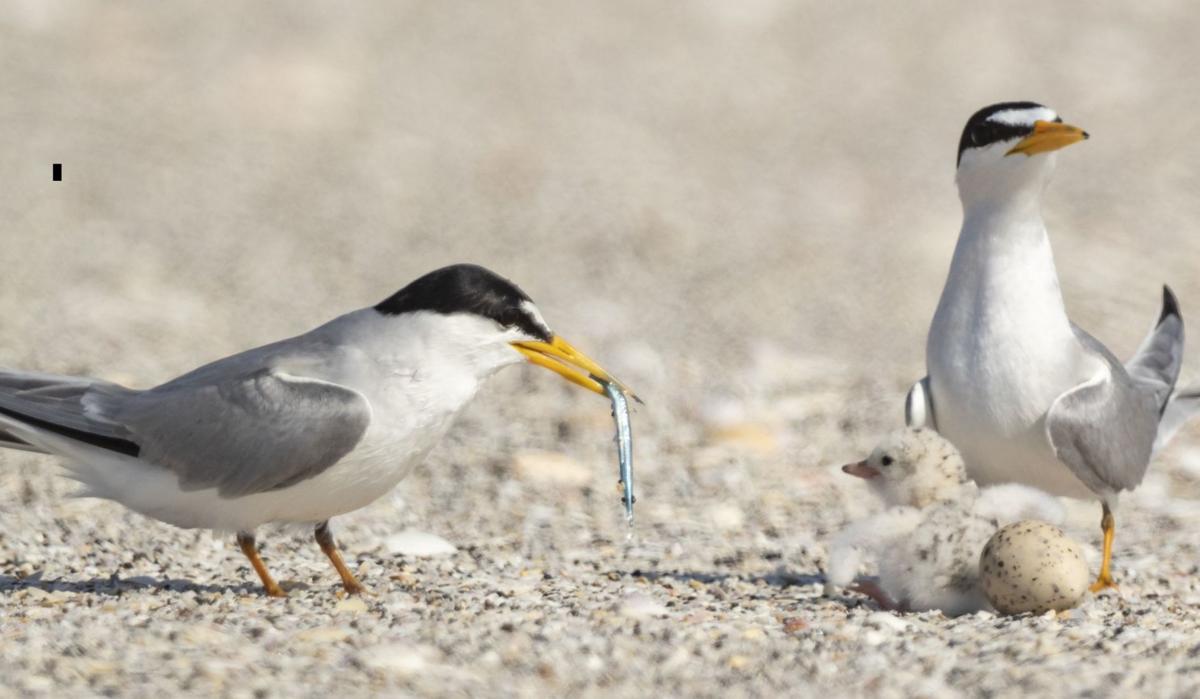 Least terns tend to their chick on a local Gulf beach. 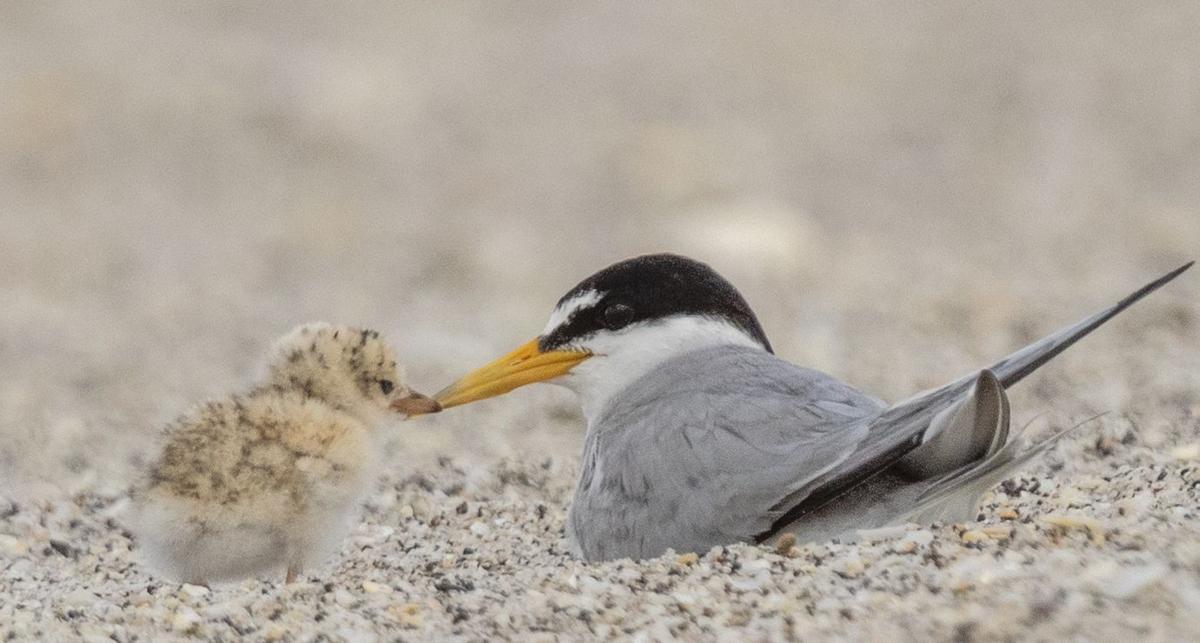 A least tern feeds its chick. Dogs on the beach can pose a threat to nesting shorebirds. 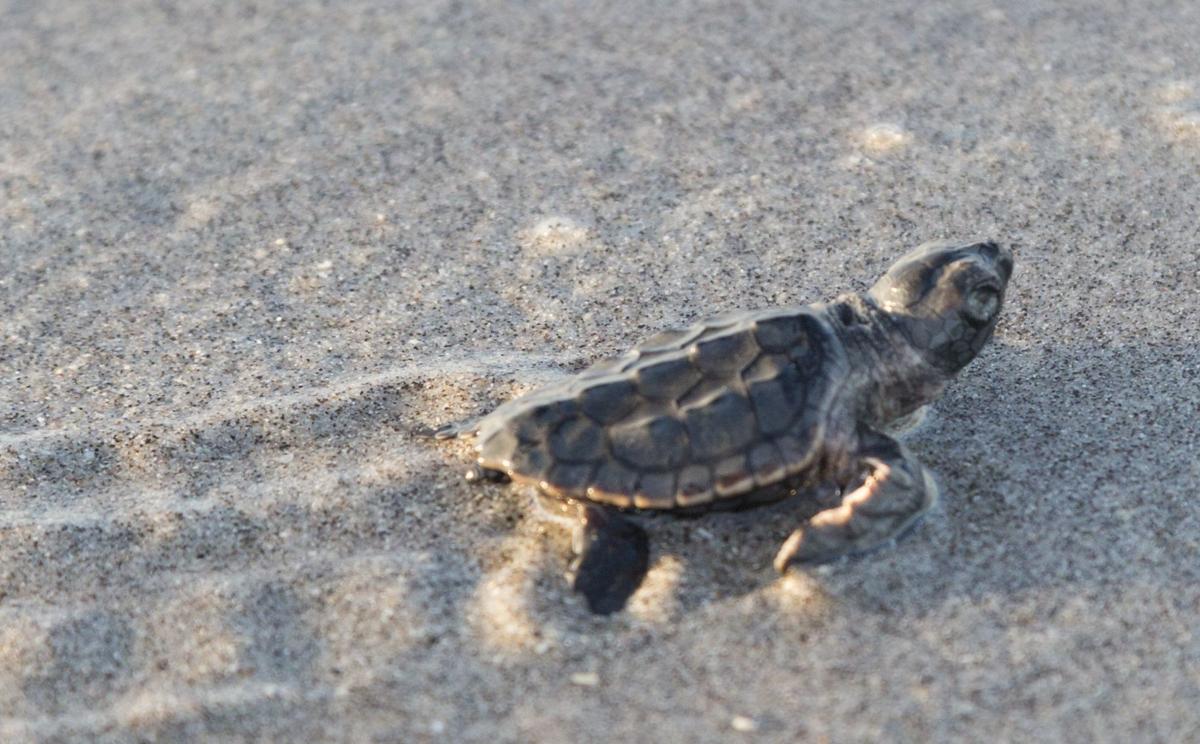 A loggerhead hatchling, newly emerged from its nest, heads to the Gulf where it will begin its life journey.

Least terns tend to their chick on a local Gulf beach.

A least tern feeds its chick. Dogs on the beach can pose a threat to nesting shorebirds.

A loggerhead hatchling, newly emerged from its nest, heads to the Gulf where it will begin its life journey.

ENGLEWOOD — An idyllic experience for dog owners — walking along a Gulf shoreline with their dogs scampering freely — can be treacherous, even deadly, for sea turtles, shorebirds and their young.

In seasons past, dogs have dug up and preyed upon turtle eggs in the nests, much like wild coyotes and raccoons. The dogs are an added stress that could be controllable.

“You can tell the difference between dog and coyote tracks,” Bossman said.

Bossman, a past president for the Venice Audubon Society chapter, also has monitored sea bird nesting on Knight and Don Pedro islands in the past. This season, she’s moving nesting shorebirds away from the ongoing beach nourishment project on the southern portion of barrier island Gulf beach.

Shorebird nests are not what some would envision as nests. The nests are no more than small indentations in the beach sand, some with the perimeters of the nests surrounded by small shells gathered by the nesting birds.

Charlotte County Natural Resources reports this season at the Palm Island Resort 23 least tern nests and 42 adults flying and feeding, eight Wilson’s plovers foraging in the wrackline and signs of a possible nest. (The wrackline is the area near the shore where the high tides will deposit seaweed, along with tiny crabs and clams, jellyfish and other creatures before pulling back offshore.)

At Stump Pass State Park, American oystercatchers are still feeding along the shoreline. A Wilson’s plover was spotted roving with her two newly-hatched chicks. A least tern colony has 20 nests with an additional 30 adults in the area. One of the Least terns moved slightly on her nest and a chick was observed.

On Gasparilla Island, the Boca Grande least tern colony area has been significantly vandalized with stakes broken and human footprints inside the protection area. The birds, however, persevere and have about 45 nests with 65 adults nearby.

A new Wilson’s plover nest with three eggs was found for the first time in several years.

The county beaches may also be home to a colony of black skimmers. Thirty-seven black skimmers were spotted resting on the newly formed sandbar near the entrance of Gasparilla Pass.

As May 22, the CWC volunteers documented 523 loggerhead sea turtle nests on Manasota Key.

Dogs can be particularly threatening to shorebirds.

“The impact dogs have on wildlife depends, in part, on whether they are leashed or unleashed,” stated the Florida Fish and Wildlife Conservation Commission in a paper entitled “Managing the Impacts of Dogs on Beach Wildlife.”

“However, many wildlife species perceive dogs, even on a leash, as predators and react accordingly,” the FWC stated. “Studies have shown that the presence of dogs on a leash or under voice and sight control can alter wildlife behavior, which has multiple negative impacts to native species.”

When nesting shorebirds feel threatened by dogs, Bossman said, they will fly off, leave their eggs or chicks exposed and vulnerable to predators.

“The energy the shorebird expends while evading dogs can offset the energy gained while foraging,” the FWC stated.

Like many of its parks, outside of service dogs, Charlotte County prohibits dogs on its public beaches. The prohibition, however, does not extend to private property beach fronts. The state ordinances do prohibit dogs from beaches except those designated specifically for dogs.

State guidelines for dogs on beaches

• Obey prohibitions of dogs on beaches. Dogs are not allowed in Stump Pass, Gasparilla Island and other area state beaches.

• Stay out of critical wildlife areas identified on myfwc.com/CWA.

• Keep out of roped or flagged beach areas even if wildlife cannot be observed.

• Keep dogs away from wildlife. Do not allow a dog to disturb or chase birds or dig holes that could damage sea turtle nests or trap turtle hatchlings.

• Pick up any dog waste.

• Anyone seeing a dog disturbing wildlife should report it to the FWC Wildlife Alert Hotline at 888-404-3922, #FWC or *FWC on cell phones, or text tip@MyFWC.com.