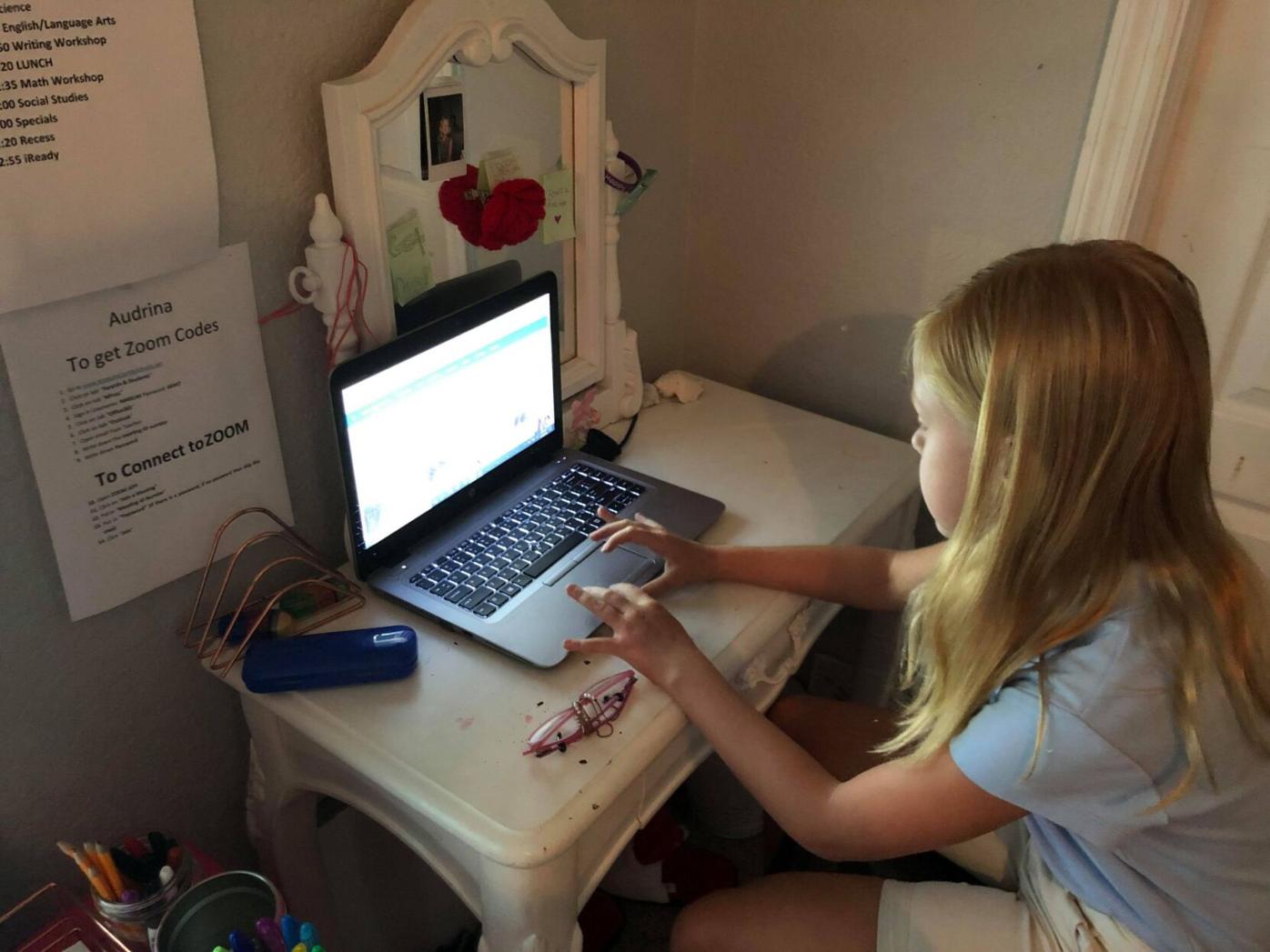 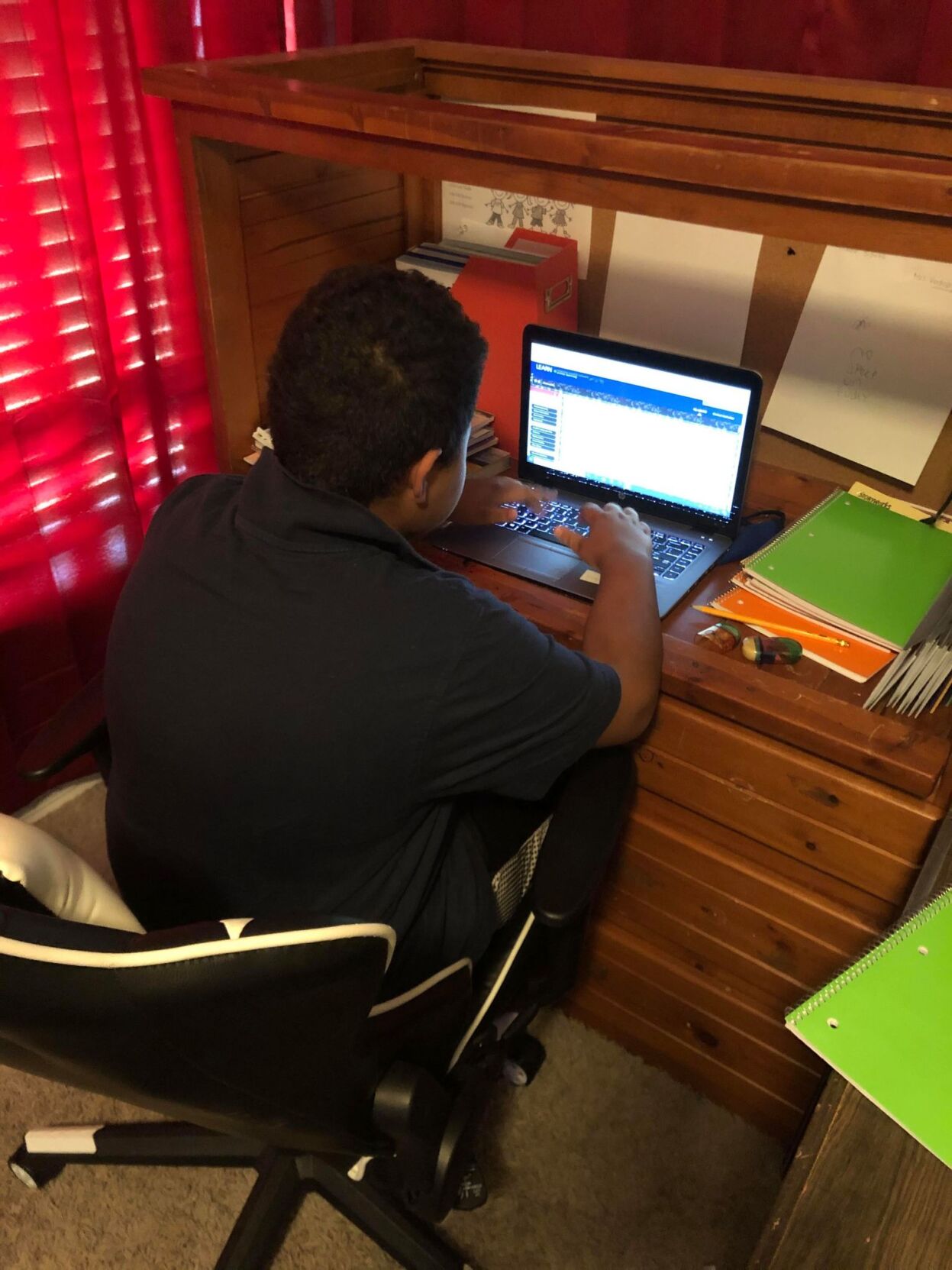 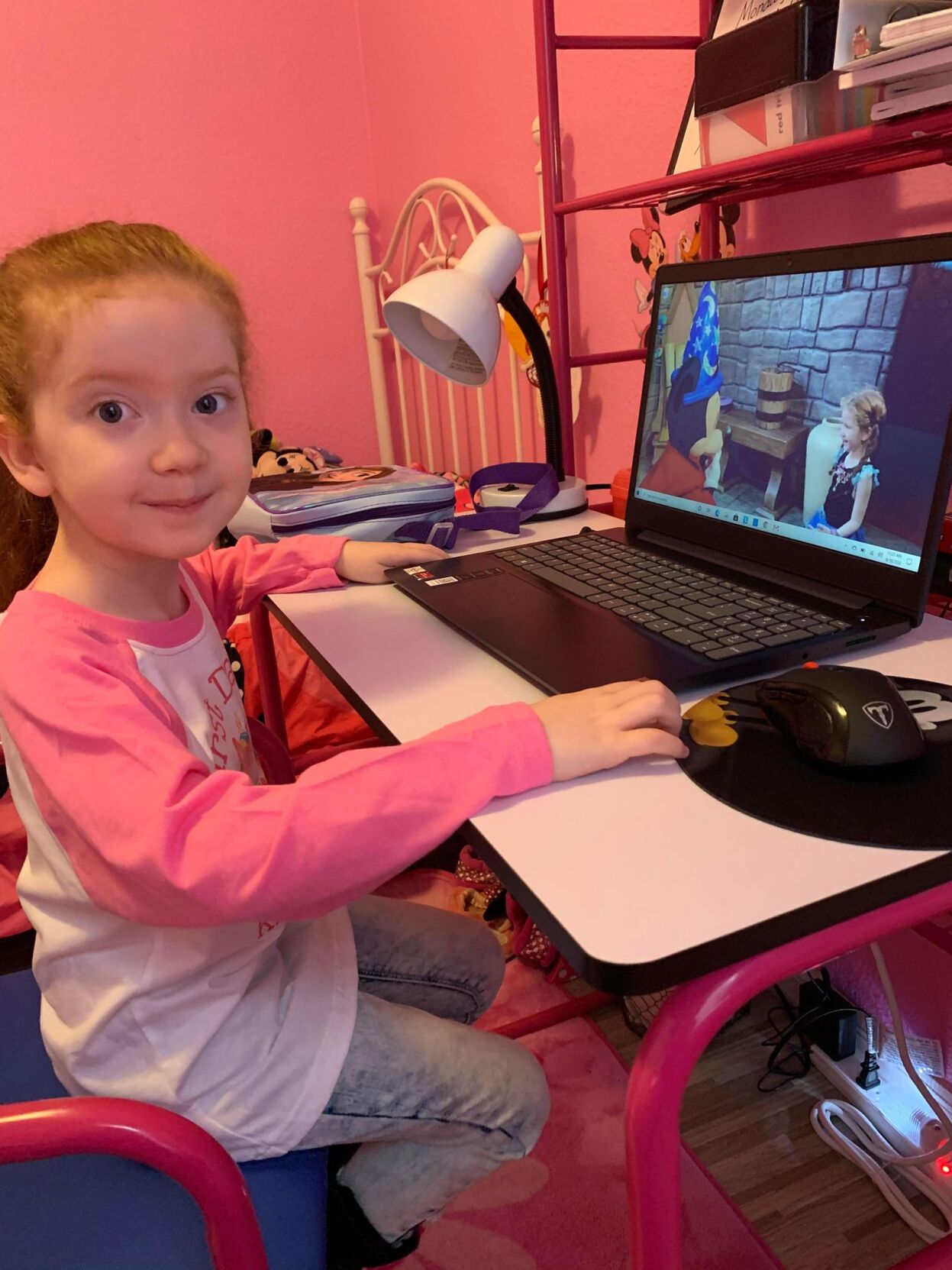 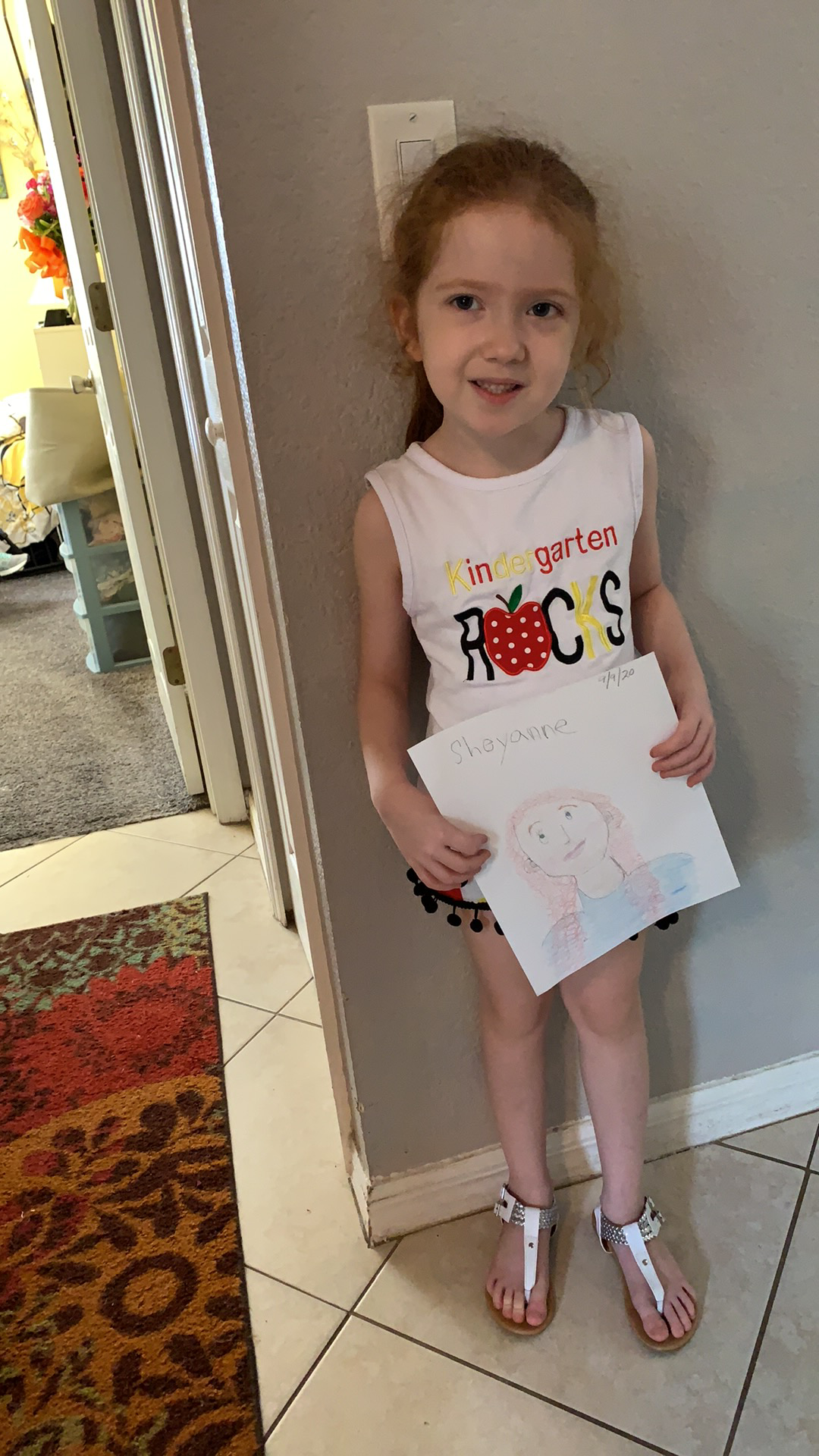 Laurie Dysart’s granddaughter Sheyanne with a self-portrait she made during Florida Virtual School.

Laurie Dysart’s granddaughter Sheyanne with a self-portrait she made during Florida Virtual School.

As a result of the continuing COVID-19 pandemic this year, more than 12,900 families have opted for an alternative form of education for their children, including Florida Virtual School, remote education, or home schooling.

She has a 9-year-old daughter, Audrina, and 11-year-old son, Marcus, learning remotely from Cranberry Elementary School in North Port.

Kristina and her husband allowed their children to be involved in the decision of how they wanted to learn for the year.

“We wanted to be prepared, just in case schools ended up closing again,” she said.

She added that if schools were to close again, she didn’t want to have to scramble to get her kids prepared to transition to distance learning or remote learning.

Another part of the reason Repullo wanted to keep her kids home was to see what happened with the number of positive COVID-19 cases in the district.

As a business owner, Repullo works from home, which afforded her the ability to keep her children home.

While her son appears to be thriving and enjoys being at home, her daughter, who has Attention Deficit Disorder (ADD), is struggling more with remote learning, Repullo said.

“She needs to be in school with the social interaction, having face-to-face learning, because she does typically struggle,” Repullo said. “Now that we’re doing virtual, she is struggling a bit more than she would normally.”

On the same week businesses began to shut down as a result of the pandemic, Audrina’s great-grandfather passed away. The family had two to three days to spend time with family members, but Repullo said her daughter had “no true grieving period.”

“There was all this stuff we were trying to figure out, and then the scare of COVID,” she said. The family realized there was no toilet paper, everything was shutting down, and they were scrambling to find supplies.

Her daughter has expressed to her that she’s tired of this year, and her “new normal” is not the same as before.

“It’s heartbreaking as a mom,” Repullo said. “We’re confused. We’re still trying to figure out our ‘new normal’ as adults. I don’t know how to express it to her.”

She said it’s heartbreaking to see her daughter, whose spirit seems to be deteriorating. Repullo has been in touch with a therapist and has an appointment for her daughter at the end of the month.

“They’re doing the best they can do,” Repullo said of the teachers. “I have no complaints with teachers or schools — it’s just the situation we’re all having to go through with this.”

Dysart said since it would be her first experience of school, she didn’t want her first impression to be based off of social distancing and wearing masks.

“We didn’t think that would be good for her,” she said.

Now, Dysart sits in the room with Sheyanne and takes notes while she’s in class, so they can work on reinforcing the lesson later, to see if she comprehended what she learned.

For example, she said one day they were learning their “M’s” and “R’s,” and during dinner, Sheyanne pointed out that meatloaf began with an “M,” Dysart said.

Then they made a game of seeing what other objects they could find around the house that began with those letters.

“I’m seeing where she’s learning and picking things up really fast,” she said.

Being able to sit nearby, Dysart also notices right away if Sheyanne needs help. She noticed that she was writing her 5’s backwards, so Sheyanne’s grandpa drew a few 5’s and she traced them as practice.

“I don’t like the idea of brick-and-mortar anymore,” Dysart said, “Between the bullying that goes on, political agendas, and I don’t think COVID is going anywhere anytime soon.”

She said for next year, she thinks she will continue Sheyanne in virtual school and supplement the instruction with home school. Dysart said she plans to join homeschool groups so Sheyanne can be socialized, in addition to signing her up for clubs or team sports.

Melissa Kanigowski’s three kids are also enrolled in remote learning. Her husband is a business owner, and that allows her to stay home and assist the kids with remote learning.

She said she couldn’t allow any of her kids to attend school in-person, because her 12-year-old son has a compromised immune system, due to Crohn’s disease. She didn’t want to enroll her kids in Florida Virtual School, because she felt like she would be the one providing the instruction. With remote learning, her kids are enrolled in Imagine School of North Port, and the teachers are providing the instruction.

Her second-grader is exhibiting signs of ADHD.

“It’s been a blessing,” she said. “If you have the wrong teacher, you could be in trouble.”

At home, she is able to sit next to her daughter throughout the day, and encourage her to stay on task.

“I’m learning about my child right now,” she said of her second grader, who she said doesn’t seem to sit still.

“I’m adapting to it to help her … it makes me question if they go back, what am I going to do for her?” she continued.

Her son attended Imagine North Port last year, which she admitted was hard on his body.

“This year’s not much of a struggle, with his autoimmune disorder,” she said.

Because of the disorder, she said he will have energy one day, and then be run down for the next few. On campus, he would feel tired and need frequent bathroom breaks, while at home, he grabs a handful of crackers and is back in class, Kanigowski said.

She added that she’s nervous the remote option won’t continue next year, because for her son, it works so well.

“It’s not what people made it out to seem,” Kanigowski said. “It’s not like they’re not getting the same amount of attention (as the in-person learners).”

Kanigowski said when the in-person learners have handwashing time or recess, the at-home learners can log off. She added that her kindergartner’s teacher will make the learning interactive, by giving them time to stand up and do jumping jacks, or make something out of Play-Doh.

Editor’s note: Since this story was written, the Repullo family has moved their children to brick-and-mortar schools.