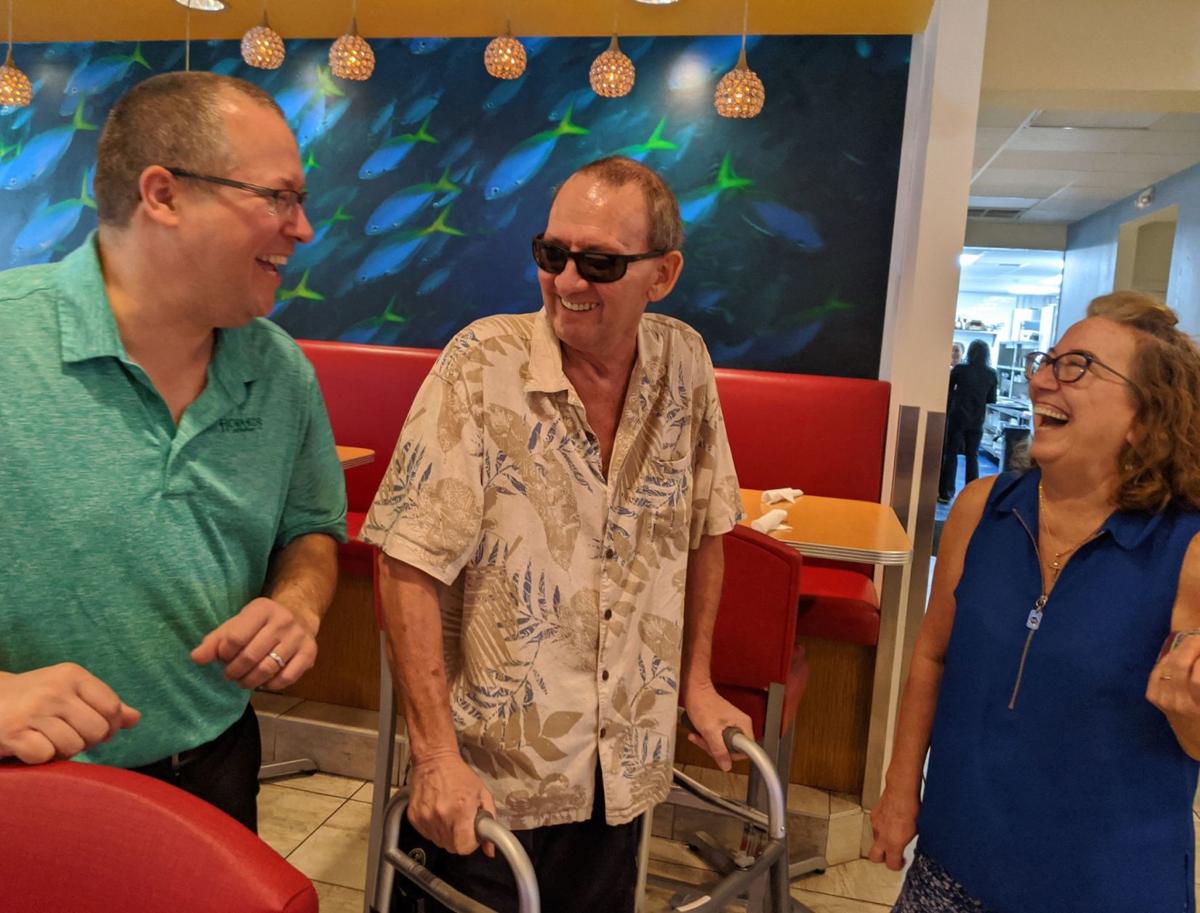 Kevin and Cecile Harrington share a laugh with Bryan Domian, left, co-owner of Howards Restaurant. Domain helped with fundraisers to offset medical expenses for Kevin who nearly died in a crash in Placida on Halloween.

The truck Kevin Harrington was driving on Halloween was crushed. The other driver was cited for traffic infractions.

Kevin and Cecile Harrington share a laugh with Bryan Domian, left, co-owner of Howards Restaurant. Domain helped with fundraisers to offset medical expenses for Kevin who nearly died in a crash in Placida on Halloween.

The truck Kevin Harrington was driving on Halloween was crushed. The other driver was cited for traffic infractions.

ENGLEWOOD — Cecile Harrington paced in her driveway. Her husband Kevin was gone too long. Then she heard the sirens and helicopter and knew something was wrong.

“I don’t know what was wrong with me, I just started crying,” the Placida woman said. “Kevin was just going to buy a bottle of wine so we could have while we were waiting for trick-or-treaters to come to our house on Halloween. He should have been back in 10 minutes. After more than a half hour went by, I knew something was wrong.

“I got in my car and drove to where I heard the sirens. It was dark. I knew he was in that crash,” she said. “I said ‘dear God let him not be dead.’ I asked the officer if it was a green Tundra that was flipped upside down.”

The Charlotte County deputy said yes. Harrington said it was her husband.

“They told me he was being flown to Lee Memorial (Fort Myers), but then a few minutes later they changed it to Sarasota Memorial Hospital,” she said. “The doctors told me Kevin had a less than 50% chance of living. He lost so much blood. He had to get so much blood. I really have an appreciation for those who give blood. He wouldn’t have survived.

“I now donate blood every chance I get.”

The crash would change the lives of the couple married for 42 years. It was Halloween and the truck Kevin drove was hit by a woman in a pickup. The impact was catastrophic.

“My truck flipped five times,” Kevin said of the powerful ramming. “I was thrown out the driver’s side window. I had broken bones in my face and had a right orbital fracture, had a skull fracture, was missing part of my knee, had broken ribs, clavicle and broke both of my legs and my neck. I had cuts on my hip and neck. There was a list of 16 injuries of things that were broken or fractured.”

Kevin’s heart also stopped beating five times. He underwent multiple surgeries. His doctors put him in a medically induced coma for 40 of the 69 days at SMH. Cecile was at his side the entire time.

However, that meant she could work at the Englewood business they owned for 15 years. Their Simply Yum Yum bakery and deli, 1809 Englewood Road at Lemon Bay Shopping Center, closed for two months. It re-opened just before Christmas. Kevin also managed five Publix plazas in the region. He had to take a leave of absence while his body healed and he went to rehab to learn to walk again.

“The woman who hit me was driving on a suspended driver’s license,” he said. “She only has $10,000 in insurance coverage. She flew through the stop sign and hit my truck hard. She only got a couple of minor tickets, one was for the stop sign, another for the suspended license and one for violation of right of way.

“There was no penalty for nearly killing me.”

Cecile said the bills from the crash and Kevin’s recovery keep coming.

Understanding the couple could lose everything, several friends, groups and local businesses planned fundraisers to help.

“The first-responders from the Englewood Fire Department came to me and asked if we could help do a golf tournament for Kevin,” said Bryan Domian, who along with his brother-in-law Ken White, is co-owner of Howards Restaurant. “The Englewood Firefighters Benevolent (Association) group sold calendars and donated some of the proceeds.”

Domian worked with Neal Communities, who waived the green fees for the tournament and Boca Royale Golf & Country Club. They enlisted Ken White, a former golf pro, Peace River Deli Provisions (Boar’s Head), Howards Restaurant and asked for the donations to be handled through Elevating Englewood Florida through the Englewood Chamber of Commerce. The tournament was held recently and raised thousands.

And the Boca Royale Men’s Golf Association held its own tournament and donated its proceeds to help.

Last week, several Boca Royale residents joined firefighters at Howards Restaurant to give Kevin and Cecile a check for $17,000.

“We knew the medical bills were to be astronomical,” Domain said. “Many of us have been friends with Kevin and Cecile for a long time. Some of us did business with their deli, others were their customers. They are really good people. They needed help.”

Community rallies for a friend

Receiving any type of assistance was a challenge for Cecile.

“People kept asking what they could do to help,” she said. “Accepting the help was so difficult. We were usually the ones who would give back to the community. I did come to the conclusion that it was all right to say we needed the help.”

Kevin is grateful for his family, friends at the fire department and Boca Royale and Domain and Ken White for caring so much.

“I kept asking where are my wings,” he said. “I know I didn’t die because I have a purpose. I have two daughters and seven grandkids. I have to give back and help others. I’ve done it my whole life.”

But Kevin says he still needs something else to help keep his business afloat.

“I’m looking for a culinary arts student or a person with a baking and deli background to come intern or donate some time for me until I really can get back on my feet,” Kevin said. “Cecile has had to do a lot of this on her own.

“She needs the help. I need the help.”