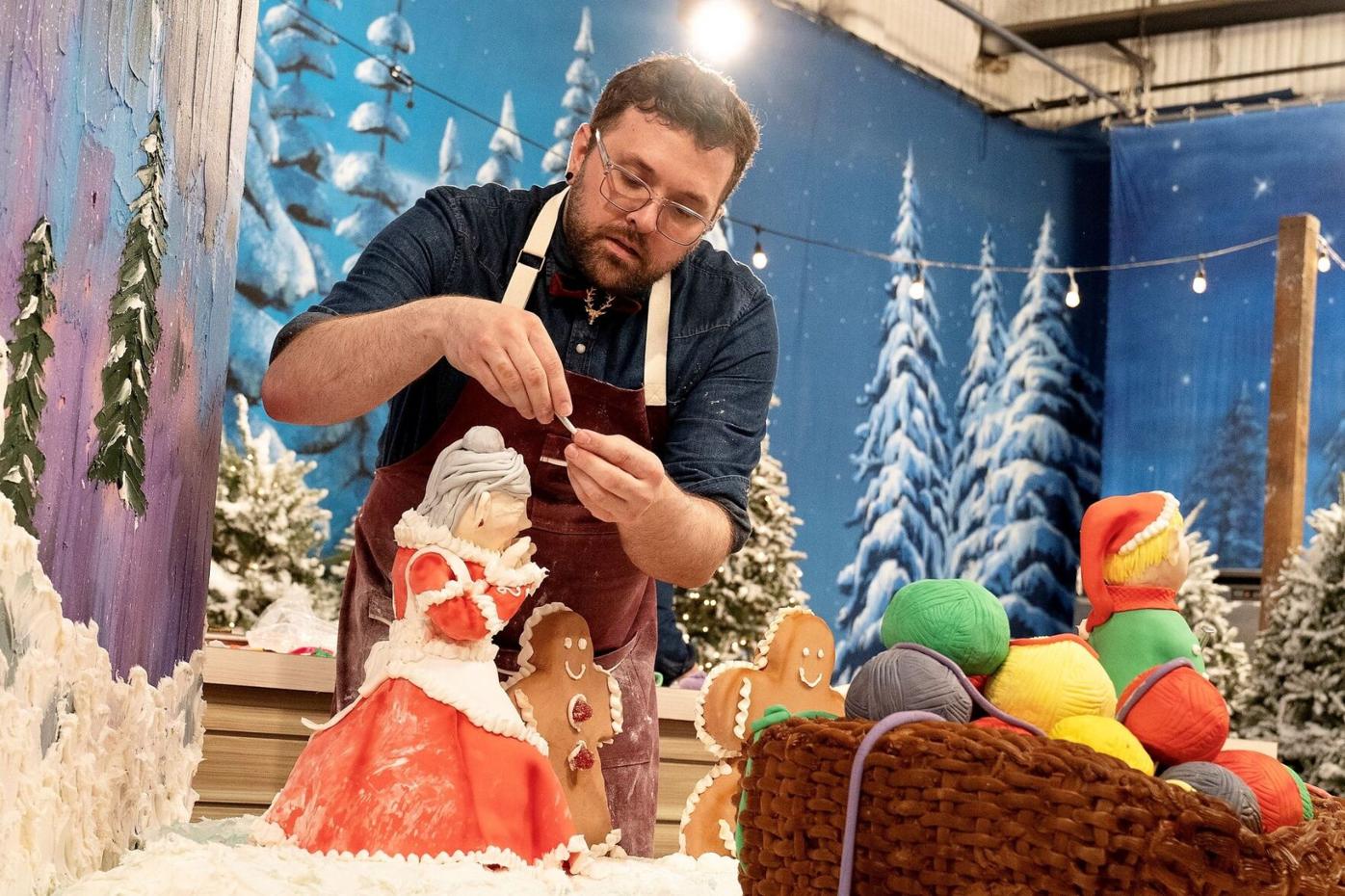 Kyle Smothers works on Mrs. Claus for Episode 1’s “Surprise Holiday Parade” challenge. This display, too, threatened to collapse, but Smothers’ expert buttercream saved the day on its backdrop. 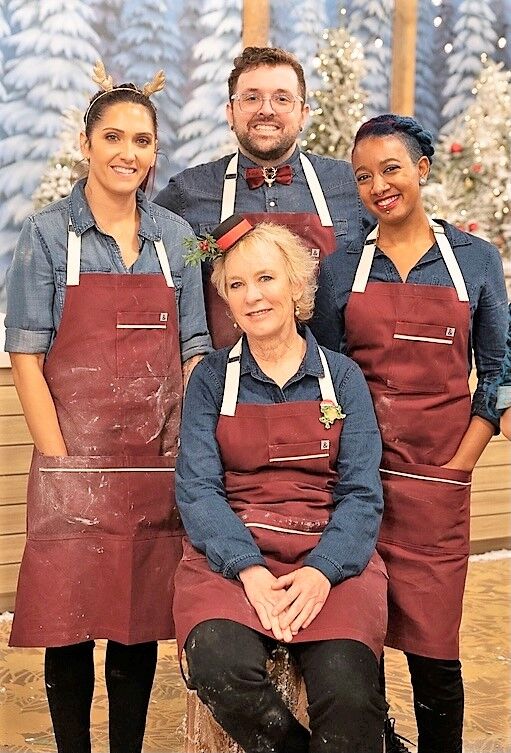 Team Mistle Toasters are, (clockwise from left) Corinda Baum, Kyle Smothers, Jessica Gousse and Sybille Kroemer, who dropped out of competition in Episode 3. She was replaced by Tiffany Lightfoot, whose team had been the first eliminated from Food Network’s “Candy Land.”

Kyle Smothers works on Mrs. Claus for Episode 1’s “Surprise Holiday Parade” challenge. This display, too, threatened to collapse, but Smothers’ expert buttercream saved the day on its backdrop.

Team Mistle Toasters are, (clockwise from left) Corinda Baum, Kyle Smothers, Jessica Gousse and Sybille Kroemer, who dropped out of competition in Episode 3. She was replaced by Tiffany Lightfoot, whose team had been the first eliminated from Food Network’s “Candy Land.”

Cake and sugar-art competitions spotlight a unique medium. As pastry chef Kyle Smothers says, “Food as art isn’t food for eating. Our hands are all over it!”

His hands will have been all over several monumental holiday displays by the end of Food Network’s “Holiday Wars,” whose second season has five teams of cake artists slinging sugar, fondant and petal dust for the approval of judges Shinmin Li and Erin Acevedo.

Though Smothers is now a Seattle-based pastry chef and owner of Home Economics, a custom cake and cookie bakery, he’s an Englewood favorite son.

His parents, who owned Englewood’s Smothers Brothers Air Conditioning, are watching the show from South Carolina, while old friends are following from Englewood.

Smothers spent most of his childhood in the area, and holiday baking decked his family tree.

“When I was growing up, we’d do Christmas cookie decorating parties every year with my cousins’ family, and I did little projects of my own, like pumpkin and zucchini bread,” he said.

The 2007 Lemon Bay High grad was involved more in theater and dance there than in culinary arts, but said: “When I realized I needed to do something hands-on, physically involved and creative that I could still do past the age of 30, baking and pastry became my thing.”

His first back-of-the-house restaurant job had him up to his elbows in dough, baking bread and desserts for Nicola’s Italian Kitchen after they’d lost their baker.

Waiting tables at the time, he’d said, “If you need me to fill in, just show me what to do. I’m a home baker.”

Today he says, “I’m forever grateful to Tina and Rina De Fazio for seeing the potential in me. They’re watching the show, too, and told me, ‘We knew you were meant for great things!’ It means a lot to have their support.”

He earned a baking and pastry degree from Keiser University in Sarasota, while working as pastry chef at Ophelia’s on the Bay.

“I seem to be doing better on ‘Holiday Wars,’” he said. “Having done another show gave me a better understanding of the expectations, the experience of having cameras on you, people asking questions while you’re working, and going into a kitchen you’re not familiar with.”

He knows that you have to work well under that kind of pressure to succeed in the restaurant industry.

“’Adapt and overcome’ became my ‘Holiday Wars’ motto as we had different things thrown at us and something we thought would work, didn’t.”

Each episode has two challenges. The team performing worst in the first is benched for the second.

“I really don’t like to say ‘I don’t know what to do,’” Smothers admitted. “But when something like that happens after finishing a piece, there’s not much you can do to fix it. Having something that’s not presentable for the judges because it’s falling apart is the worst feeling you can ever have. You know you’re better than that.”

But the challenges on “Holiday Wars” weren’t just the two in each episode. They started even before filming.

Contestants learned who their teammates were only just before flying out to the studio. Smothers slipped easily into the role of team captain for Team Mistle Toasters, but they all started out as strangers.

“It’s interesting when you’re thrust into that position with a group of people whose skill sets and capabilities you don’t know,” he said. “My stance from the beginning was: A weakness is only a weakness for us if you’re not upfront about it. We all had strengths and weaknesses, but as long as we knew that about each other and could recognize who was best fit to do certain things, we were able to dive into the challenges as a team.”

For instance, cake artist teammate Corinda Baum excelled at sculpting with fondant. With his own strength in buttercream, Smothers focused on painting wintry backdrops with it.

And cake artist Sybille Kroemer might have come late to baking, having spent most of her former life as a dental assistant, but growing up, she loved art and enjoys using food as a medium.

Jessica Gousse did the tasting element — each episode’s candy or pastry bites for the judges — because she and Smothers were the only two who’d worked as pastry chefs.

“Each of us in the team was able to bring something of ourselves to the challenges,” he said. “For me, there’s always that itch to be back on stage. It was awesome to showcase that on the show.”

His past as a drag performer, with the sweet sobriquet “Candie Apple,” came out in Episode 3, when his team created what he called “the first drag turkey in history.”

“As soon as they said ‘turkey makeover,’ I was, like, this is what I’m good at! We did Tom the Turkey in drag disguise as Lotta Stuffing.”

Smothers is also an avid knitter, a side of him that was woven into Episode 1’s yarn-basket float for Santa’s holiday parade.

Even Smothers’ compassion came through.

When severe back pain sidelined teammate Sybille Kroemer during Episode 3, the team captain explained on camera, “It’s a very stressful environment, physically and mentally. We’re at the point where we can do the finishing details, and she can do what she needs to, to recuperate.”

Later, he said, “At that point, it wasn’t make it or break it for us as a team. (They succeeded.) I always go into everything, whether work or recreation, putting health first.”

“Ever since I was a kid,” he concluded, “I told my family that I was going to be on television. I didn’t know what, I didn’t know how — I just knew. So I guess, through Food Network and ‘Holiday Wars,’ I’ve found my niche.”

We’ll have to wait to find out how Kyle Smothers and Team Mistle Toasters did. But one way or another, he seems to have a Food Network future.

“I’m forever grateful to Tina and Rina De Fazio for seeing the potential in me. They’re watching the show, too, and told me, ‘We knew you were meant for great things!’ It means a lot to have their support.”

“As soon as they said ‘turkey makeover,’ I was, like, this is what I’m good at! We did Tom the Turkey in drag disguise as Lotta Stuffing.”