A female sea turtle heads back into the Gulf of Mexico after making a nest and laying eggs. 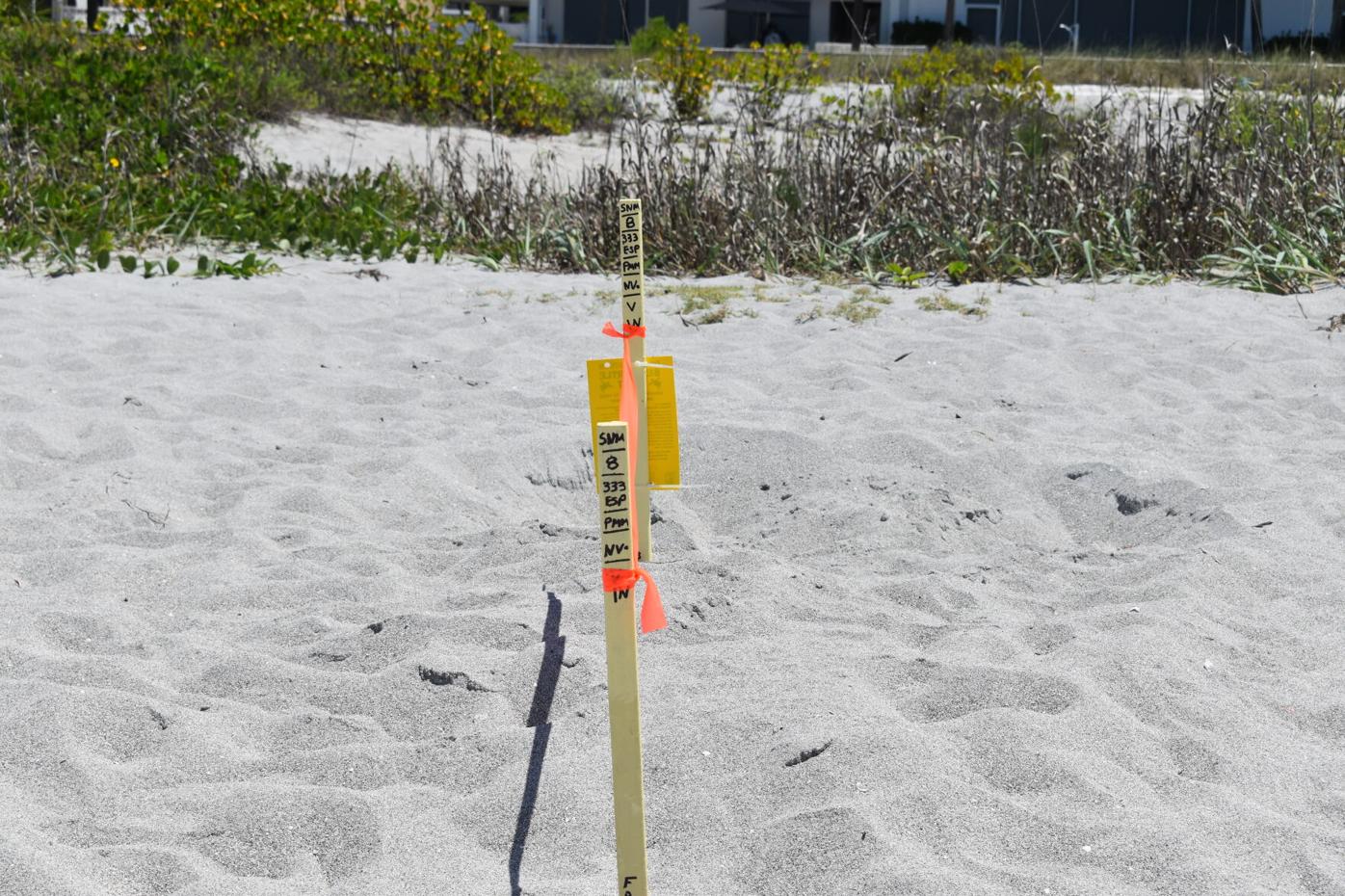 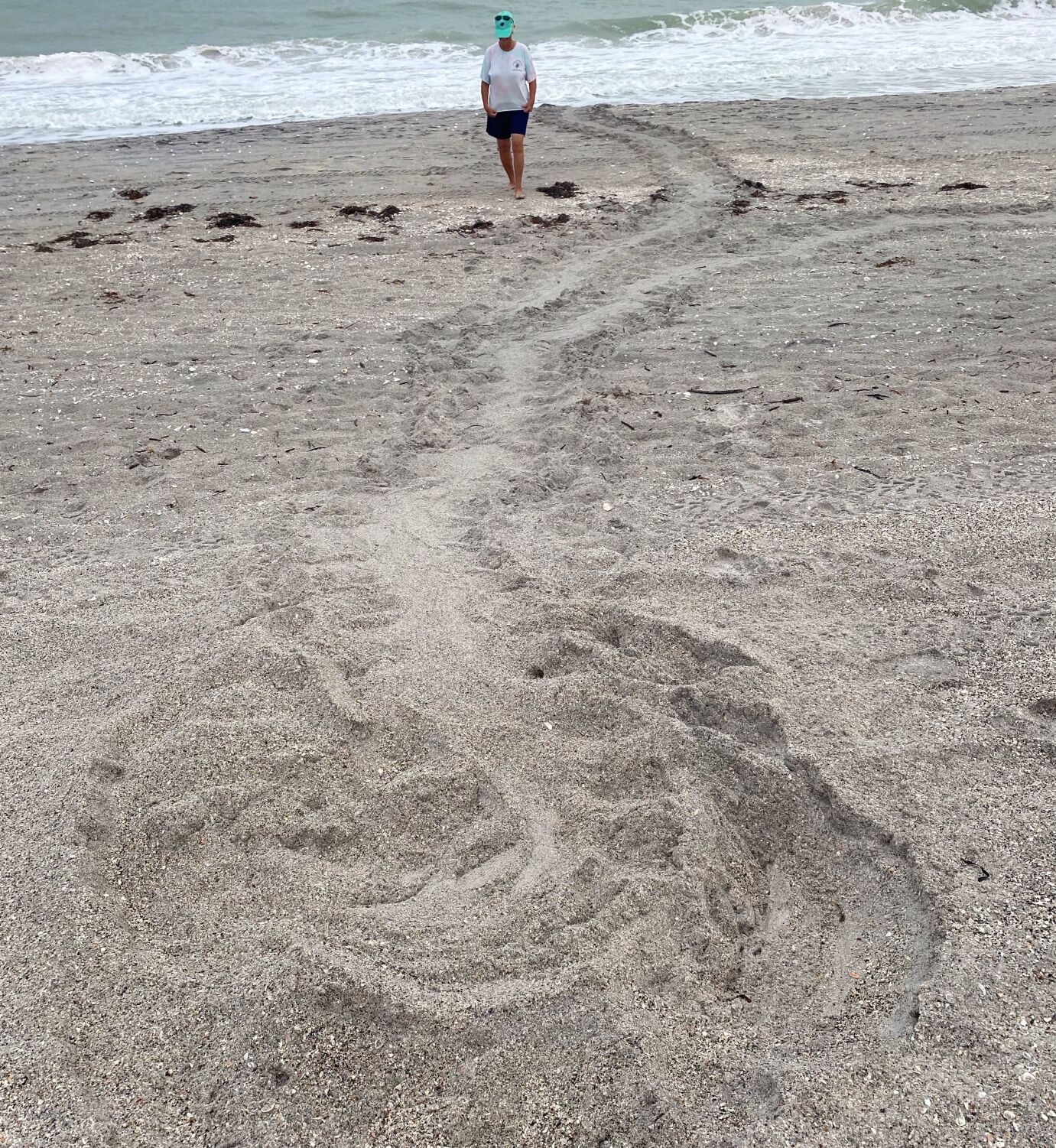 Coastal Wildlife Club sea turtle patrol volunteer Diane Yeomans follows the trail left by a nesting loggerhead sea turtle. The female loggerhead pulled herself out of the Gulf, up Stump Pass State Beach, laid her eggs and then dragged herself back to the Gulf.

It’s time to turn off the lights.

May 1 is the official start of the local sea turtle nesting season that lasts until Oct. 31.

People can help keep the turtle mothers and babies safe.

“When visiting Charlotte County coastal beaches, please give nests space when setting up at the beach, fill in any holes created and knock down sand castles,” Charlotte County stated in a press release Friday.

“If on the beach at night, do not use flashlights or cell phone lights as they can deter nesting or confuse hatchlings returning to the water,” the county cautioned.

As might be expected, sea turtles do not carry calendars with them. Two nests were reported last week. Hundreds more will likely appear in the weeks and months to come.

Volunteers marked the nests with painted wooden stakes and plastic ribbons to keep people from stepping on them.

There are new nests to report — for now.

Loggerhead sea turtles are the most abundant in Florida waters and the most abundant nesting on local beaches. According to the state wildlife officials, females return to their nesting beach every two or more years and are expected to lay four to seven nests, one about every 14 days. Each nest contains 100-126 eggs that incubate in 60 days.

Don Pedro Turtle Patrol is looking for volunteers who want to participate in a citizen-science project monitoring and helping with the documentation of sea turtle nesting on Don Pedro and Knight islands.

Volunteers must be willing to start patrolling at 6:30 a.m. They will be trained in all aspects of species identification and documentation of nesting. Training will continue throughout the first year of volunteering, and first-year volunteers will be expected to patrol beaches at least three days per week.

For those volunteers living on the mainland, transportation will be provided on and off the barrier islands.

Accurate data collection is the No. 1 concern. A volunteer's reward is knowing they are helping to protect an amazing and endangered species, as well as enjoying time on a beautiful beach.

The nesting season for patrols extends from May 1 to mid or late October.

Anyone interested can email Brenda Bossman at: Benda@DonPedroTurtlePatrol.com. Please include a contact phone number and best time to call.

Artificial lighting, including flashlights and the bright lights of smart telephones, can dissuade an adult female turtles from nesting.

Florida Fish and Wildlife Conservation Commission cautions on myfwc.com how especially dangerous artificial lighting is for the hatching turtles emerging from their nests:

“In the past the hatchling turtles were guided to the ocean by an instinct to travel away from the dark silhouettes of the dune vegetation and toward the brightest horizon, which was the light from the sky reflecting off the ocean,” wildlife officials stated.

“In present times, however, many coastal areas are highly populated. There are many artificial lights near the beach that can deter females from nesting and disorient hatchling sea turtles.

“The hatchlings travel inland, toward the artificial lights, where they often die from dehydration, are preyed upon by fire ants and ghost crabs, or sometimes crawl onto the road where they are run over by cars,” the wildlife commission website states.

Also, the FWC posted a study online of the impacts of artificial lighting on nesting sea turtles and hatchlings.

The city of Venice, Sarasota and Charlotte counties all have ordinances in place calling for lights shining on the beach to be turned off or redirected. Drapes or blinds should be closed to minimize any indoor lighting shining onto the beach.

All sea turtle species are federally and state protected as endangered and threatened species.