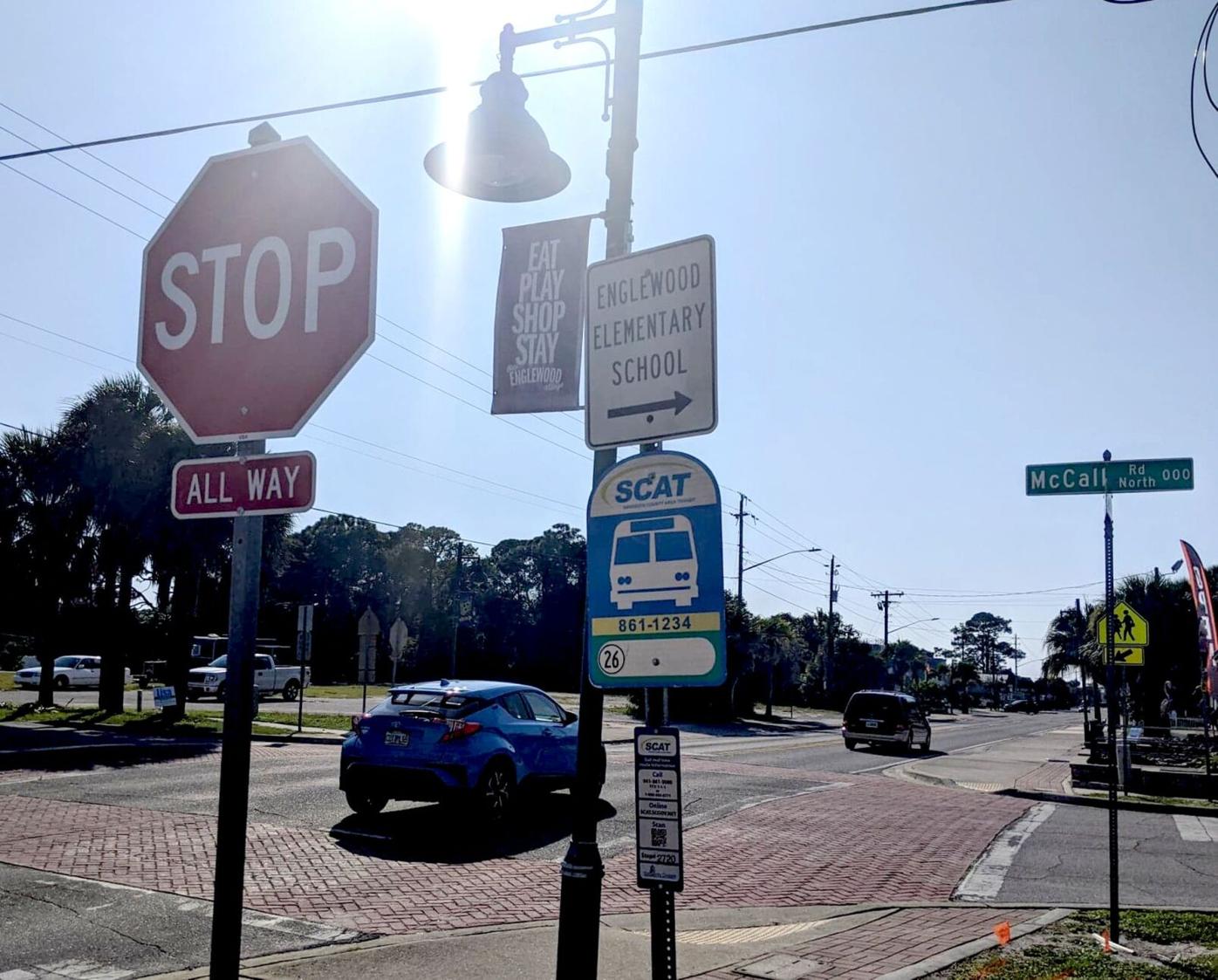 Obstructions like lots of signs and over grown tree limbs make it challenging for some motorists at the four-way stop sign on West Dearborn Street and McCall Road.

The limbs and fronds, after cutting.

Obstructions like lots of signs and over grown tree limbs make it challenging for some motorists at the four-way stop sign on West Dearborn Street and McCall Road.

The limbs and fronds, after cutting.

ENGLEWOOD — Without the Community Redevelopment Agency to turn to for guidance, Realtor Brian Faro took matters into his own hands.

Since COVID-19 hit the area six months ago, the CRA board hasn’t had any meetings. Under normal circumstances, Faro, a Realtor at Paradise Realty at 200 W. Dearborn St., would bring up his concerns about the sign at the four-way stop to the board which oversees activity along Dearborn Street.

For the past two years, Faro watched vehicles blow through the intersection in the heart of Olde Englewood at Dearborn Street and McCall Road, just outside his office. Realtor Janet Shawen also consistently sees violators.

Some reasons the pair believes motorists weren’t stopping is obstructive tree limbs and palm fronds, and there are too many signs competing for attention in the county’s right of way.

“I took a drive down Dearborn and realized that you can’t see the stop sign until you are about four cars away,” Faro said. “People thought it was just kids or people from out of town. That’s not it. Garbage trucks and delivery drivers are blowing through the stop signs. Everybody runs it.”

“It was a big difference,” he said. “Now you can see the sign from half a block away.”

“We have to do more to help families and students who use this crosswalk area at the four-way stop,” Shawen said. “A car ran the stop two weeks ago and a kid fell off his bike. The kids have to walk to school because there’s no bus for them. They feel safe walking when responsible drivers are obeying the stop signs. Otherwise, the four-way stop gives a false sense of security.”

Shawen is working with a captain at the Sarasota County Sheriff’s Office for more enforcement.

“We then sent both patrol and traffic deputies out there the next day and sporadically since then,” wrote Kaitlyn Perez, Sarasota County Sheriff’s Office spokesperson in an email to the Sun. “They (businesses, families) can also always contact us if they need additional support with enforcement.”

Faro will continue to ask the county for help.

“I reached out to the CRA in 2017 and presented some ideas,” Faro said. “The county issued a ticket for them to make some improvements, but it really didn’t go anywhere. I waited, but had to take matters into my own hands. The area still needs more attention.”

The pair want the county to investigate if solar-power lighted stop signs will help.

“I did some research and they are about $875 each,” Faro said. “The CRA saved money because several events were canceled on Dearborn Street because of the virus. Maybe some of that money could be reinvested into new stop signs, striping or other improvements to make this intersection more safe.

“I know there’s not a lot of accidents here. But from where I sit, I see the near misses and hear people honking their horns at people who don’t stop at those stop signs. The county can come sit in my office and watch. “