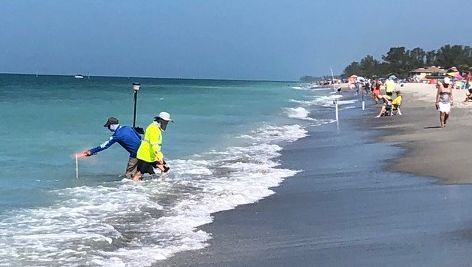 Surveyors wade into the water to mark what is the erosion control line south of Englewood Beach. The lines mark what is private and what is public beach on Manasota Key. 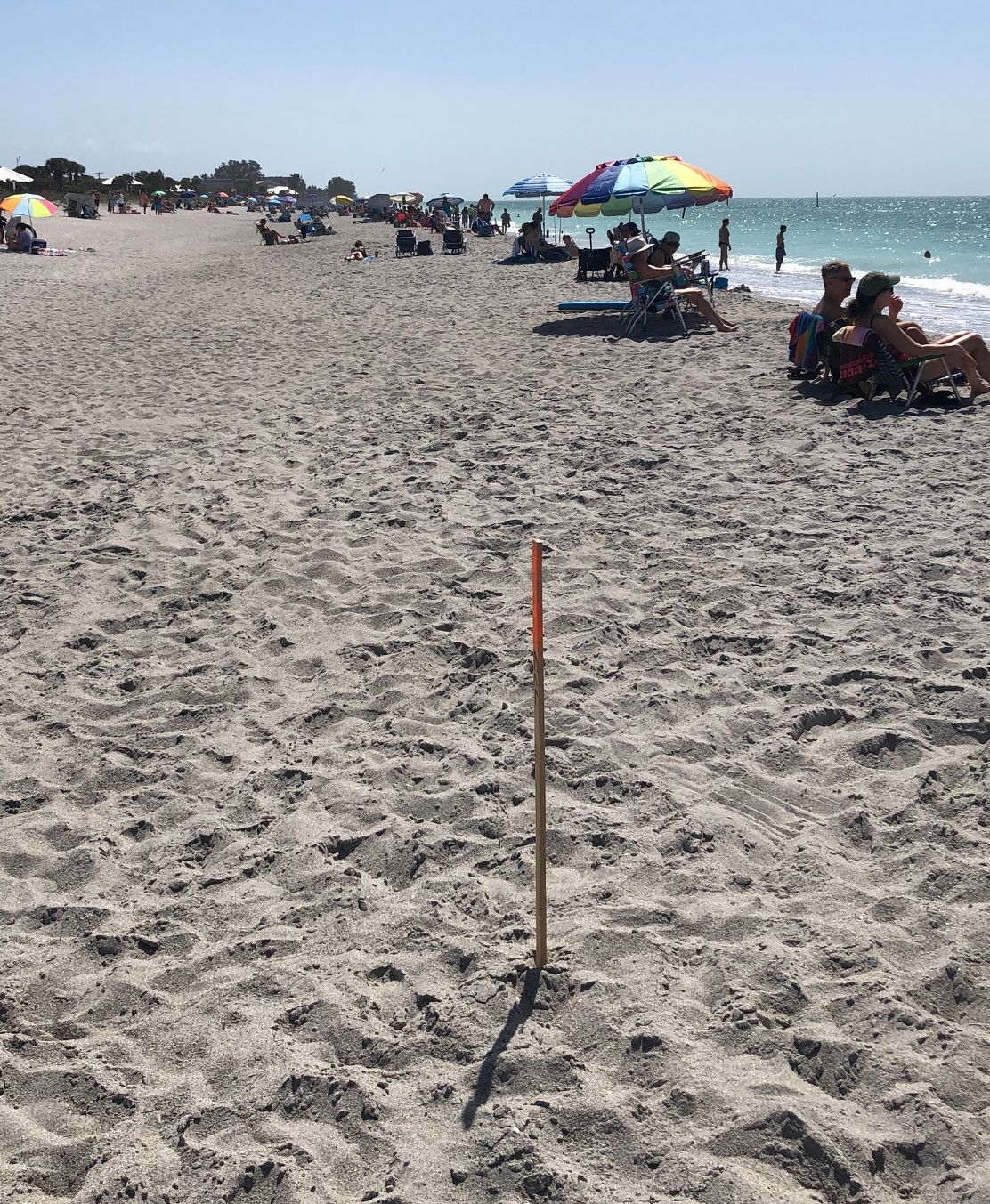 The stick isn't a homemade sundial. It marks the line between private and public beach on Manasota Key, north of Englewood Beach. The South Manasota/Sandpiper Key Association hired surveyors to determine where erosion control lines were along the Gulf shoreline. 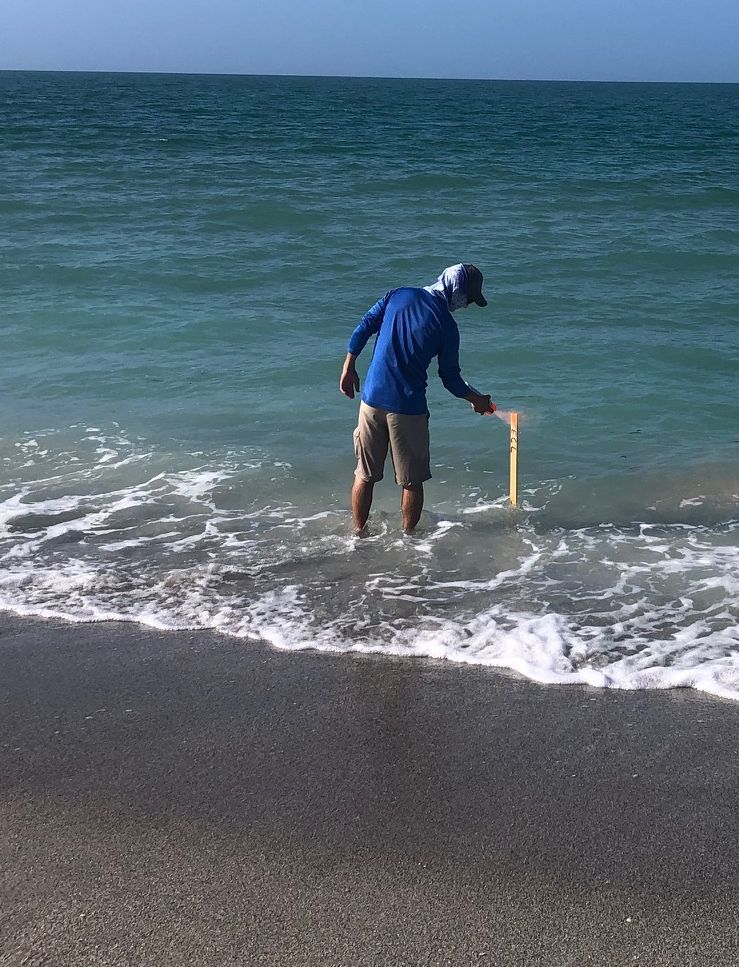 What a difference a year makes. Surveyors discovered erosion control lines — which determine private and public beach on Manasota Key — are now in the shallows of the Gulf after an active hurricane season.

ENGLEWOOD — Some sand pumped onto Manasota Key during a $30 million beach renourishment project has moved offshore — with the lines between public and private land now underwater in some places.

A rough storm season, including a brush by Hurricane Eta in November, pulled away some of the newly placed sand into the Gulf of Mexico, county officials said Thursday during a Charlotte County Beaches and Shores advisory board meeting.

Charlotte County spent $21.3 million on the project, with Sarasota kicking in another $8 million to help shore up erosion on Manasota Key. The main part of the project wrapped up May 1, 2020. The final part was finished this month, with tons of protective rocks being placed offshore.

But sand will move, officials say. And while the newly renourished sand looks gone, it’s still doing its job protecting the shoreline, since it’s just offshore.

“It can look concerning,” Charlotte County project manager Matt Logan said. Speaking to the south end of Manasota Key, he said, “The sand is pretty much where it was pre-construction.”

At the same time, property north of Englewood Beach gained sand — at least for now.

The Beaches and Shores Committee heard Thursday how South Manasota/Sandpiper Key Association contracted for a survey to identify the exact locations of erosion control lines the county established last year.

A year ago, prior to replenishing sand along the shore, Charlotte County and the state established erosion control lines as a permanent demarcation, the lines between private beach and public beach.

Landward of the line is private beach, while the land between the line and the Gulf is public property.

The lines vary depending upon how much dry sandy beach existed before the project pumped new sand to renourish the beach.

The South Manasota-Sandpiper Key Association surveyors determined some lines, south of the public Englewood Beach, had moved into the shallows of the Gulf.

“All of the public sand is in water, and all of the beach ‘technically’ is private beach,” association president Damian Ochab told the Charlotte County Beaches and Shores Advisory Committee on Thursday.

“The intent of our organization is to educate public that there is private (beach) on Manasota Key and to respect that,” Ochab said, hoping, too, that homeowners along the Gulf will be respectful, “neighborly,” the general public as well.

“The intent is to educate the (homeowners) as well,” he said.

Now you see it, now you don’t

North of Englewood Beach, beachfront is not a problem at this time. Properties, some of which were in danger of falling into the Gulf before the beach project, gained sand and now enjoy wide expanses of private and public beaches.

But to the south, it the sand has moved in the other direction.

Logan, the county’s project manager, explained how the nourishment project expanded the beach far wider than the goal of maintaining a 50-foot-wide beach.

As expected, in the wake of storms and other natural processes, sand slipped beneath the water’s surface.

Sandy beaches can be much like icebergs with much of their base underwater and out of sight, Logan said. Unlike the time before the beach renourishment, the sand now lays just offshore. Also, the sand slipping off the beach has filled a trough, which will help stabilize the shoreline.

“That is beautiful for our beach,” Logan said. “Now, we have an area where wave action can break before it hits our sand and pulls it off the beach.”

The bottom line, Logan suggested, is the Gulf shoreline along Manasota Key is much more stable. But as for predicting when will a replenishing cycle begin for properties south of the public beach, Logan did not want to second guess nature.

ENGLEWOOD — The South Manasota/Sandpiper Key Association was surprised to discover many of Erosion Control Lines (ECL) on the south end of the key are now underwater.

A year ago, before the beach nourishment project started replenishing the Gulf shoreline with sand, Charlotte County and the state established ECL lines, a permanent demarcation of what is private beach and what is public beach.

The association decided to conduct a survey that, surprisingly, discovered the south of the public Englewood Beach, some erosion control lines were now in the shallows of the Gulf shoreline.

"The sand is pretty much where it was pre-construction."