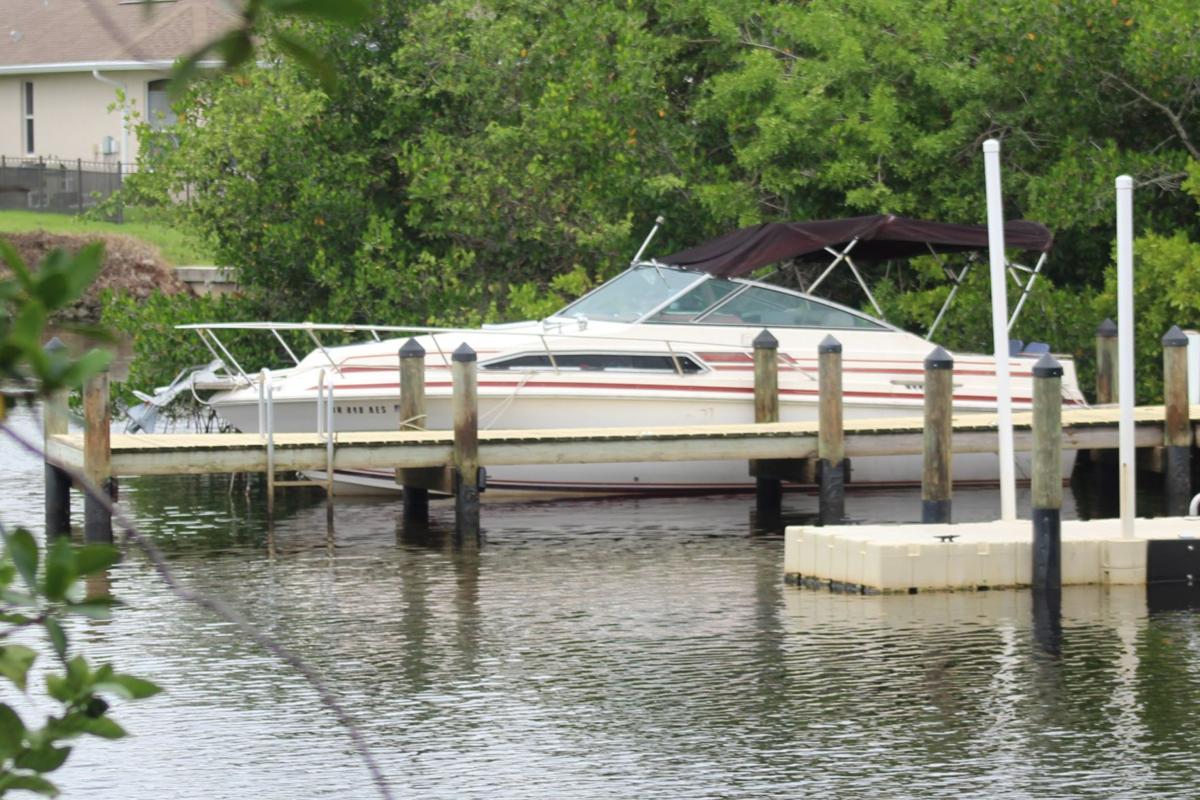 Members of the Gulf Cove neighborhood are upset about a boat that was left at their community association’s dock. 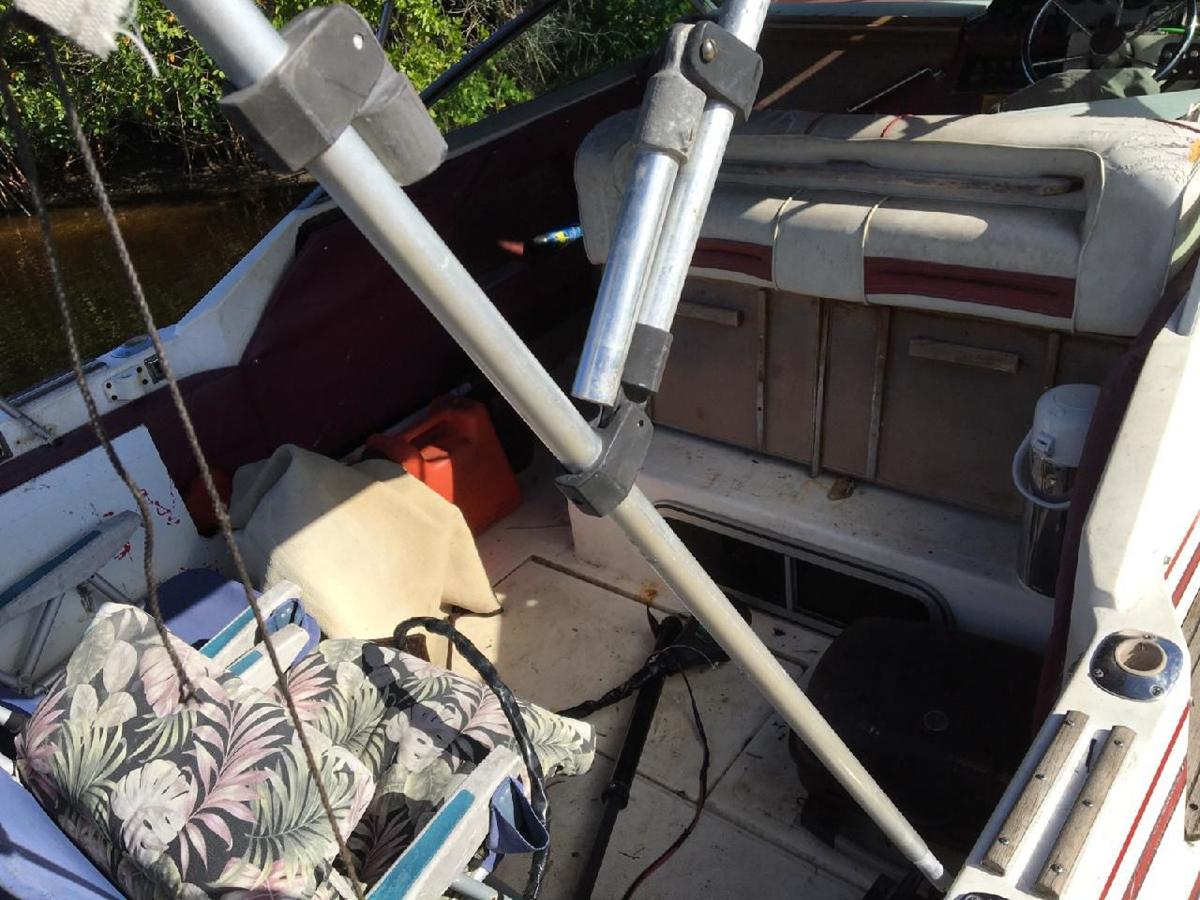 A boat mysteriously appeared in October at a private dock at Gulf Cove. Now homeowners may have to have it towed if Charlotte County and the state won’t help. 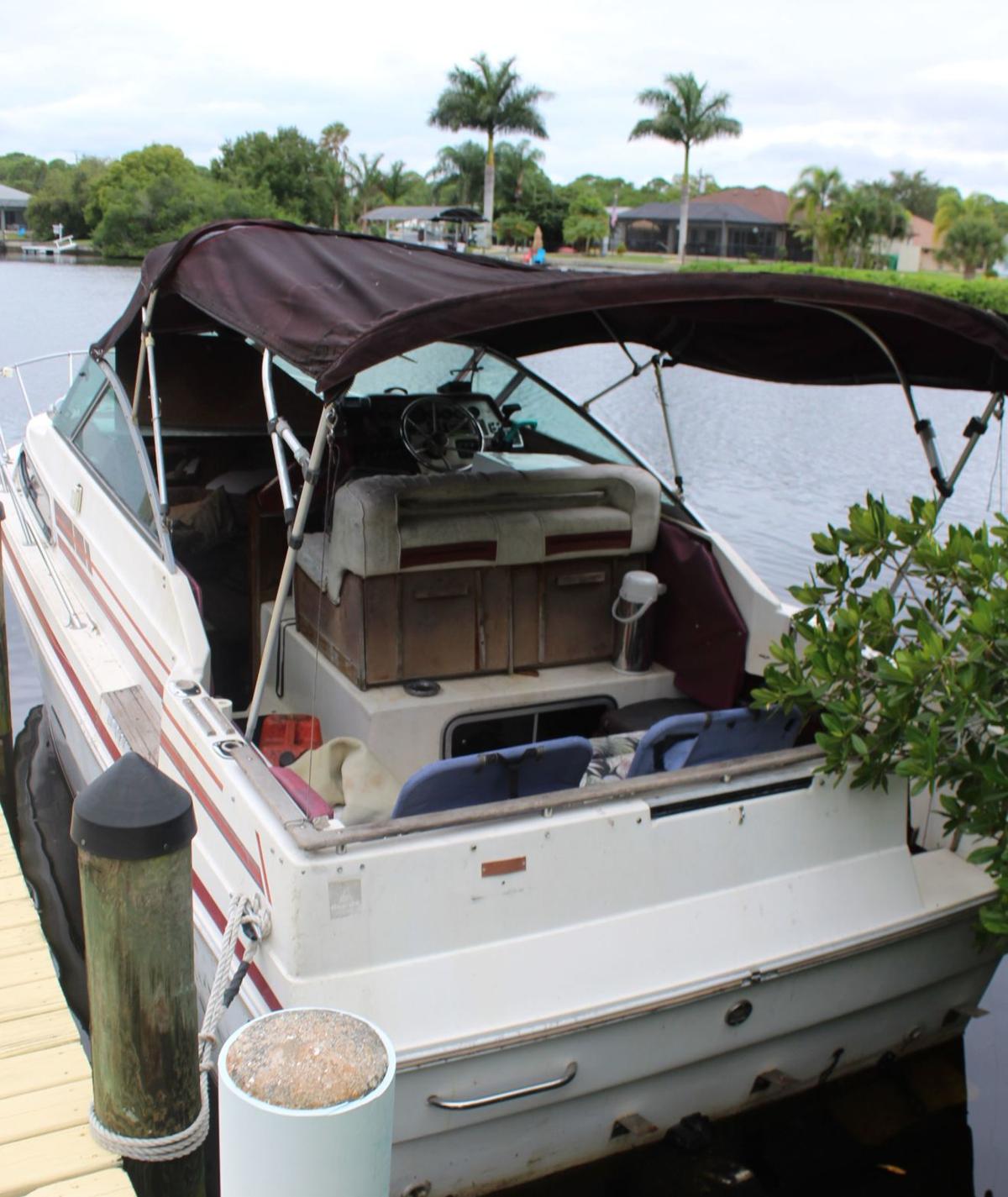 Gulf Cove residents say they have safety concerns about this apparently abandoned boat tied to their community dock. The boat is open to the elements and is filled with personal items. 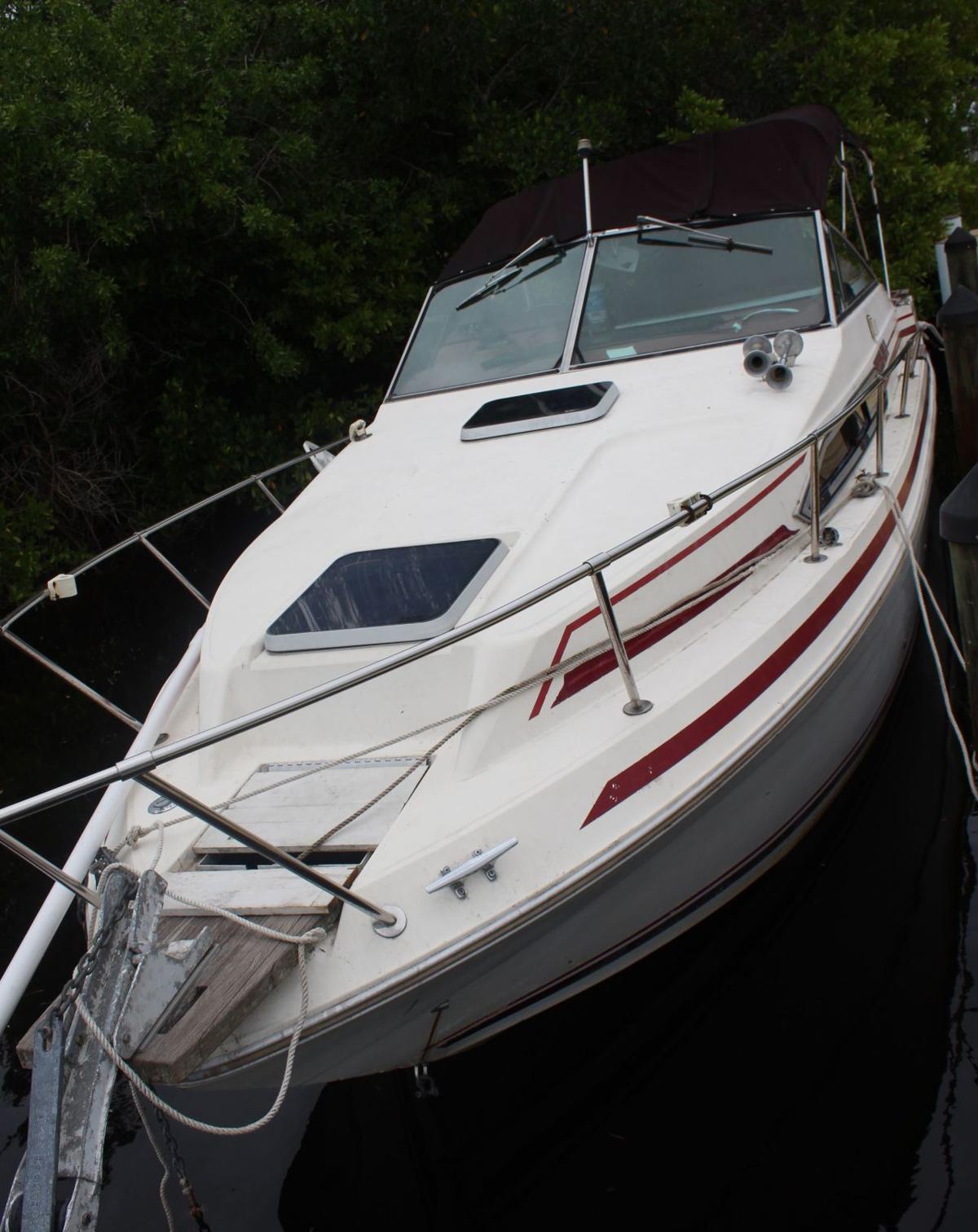 Someone tied this boat to the community boat ramp in Gulf Cove, between Port Charlotte and Englewood. Neighbors are concerned that someone may be living on it. 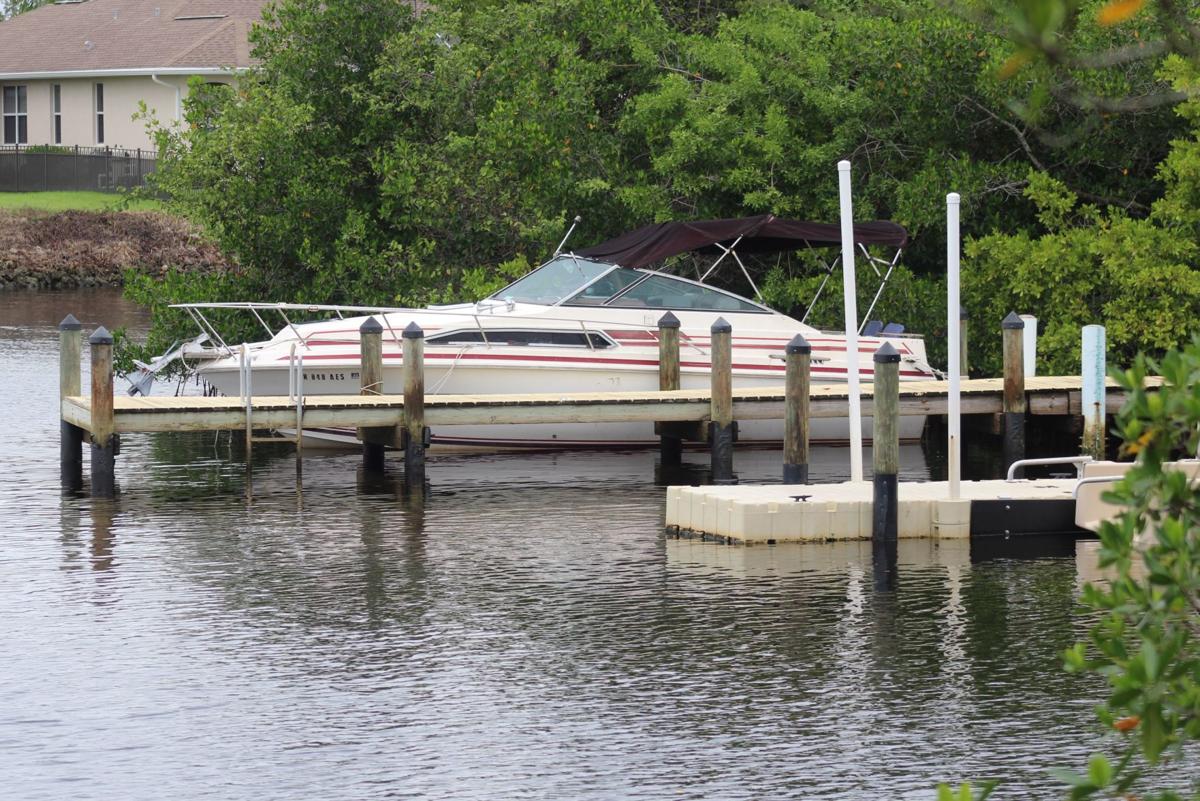 Members of the Gulf Cove neighborhood are upset about a boat that was left at their community association’s dock.

A boat mysteriously appeared in October at a private dock at Gulf Cove. Now homeowners may have to have it towed if Charlotte County and the state won’t help.

Gulf Cove residents say they have safety concerns about this apparently abandoned boat tied to their community dock. The boat is open to the elements and is filled with personal items.

Someone tied this boat to the community boat ramp in Gulf Cove, between Port Charlotte and Englewood. Neighbors are concerned that someone may be living on it.

GULF COVE — A thin, shirtless, barefoot man tied a boat to a private dock in Gulf Cove in October. He walked away and hasn’t been back since.

Now, Gulf Cove residents learned the boat is their problem.

“This is so unfair to us,” said Janet Dietz, president of the Gulf Cove Property Owners Association.

“We contacted two county commissioners and they haven’t responded. The boat just appeared. Our security cameras caught the man tying up the boat. But we don’t know who he is, and we don’t want to go on the boat because it’s not ours.”

Last week, the association met with Charlotte County Sheriff’s Office authorities to try to figure out who is responsible for the boat and who can get it removed.

“We were told we have to get an attorney and find out who the boat’s owner is and try to contact them and ask them if they still want the boat or did they abandon it,” she said. “We would have to pay to tow it. Again, we believe this is very unfair to us. We don’t pay a lot of money to be a part of this association.”

The group was also told there’s an “ongoing investigation” into the boat.

“We learned the boat was registered to an owner in Oregon, but the deputy would not share the person’s name,” Dietz said. “We thought the name would be a public record because there’s a report on this boat. It was spotted in South Gulf Cove. We were told they think someone homeless might be living on it.”

Dietz said when the boat was first docked, there were dishes, keys, a gas can and other items in plain sight.

“There’s two things we are concerned about with this boat,” she said. “We can see some water inside the boat, so we think it may have a hole in it. The other thing is that when our residents go out on a sunset boat ride, they are afraid when they pull in near this boat that there might be someone inside who may try to cause harm to our boaters.

“We are going to call the sheriff’s office every time we are fearful.”

In 2007, the Charlotte County Commission approved an ordinance that addresses abandoned and derelict boats, including those that are a hazard to navigation.

This year the Florida legislature added a law that gives counties and local law enforcement agencies the ability to apply for grants that could help quickly remove derelict boats from waterways. The program is run by Phil Horning, Derelict Vessel Program administrator with the Florida Fish and Wildlife Conservation Commission, or FWC, in Tallahassee.

After many complaints of derelict boats in Englewood and Charlotte Harbor waterways, Horning came to the area and met with representatives from Charlotte County government and the sheriff’s office to explain the new additions to the derelict boat laws, the grant procedure and how to collaborate with FWC and each other to get unwanted and dangerous boats out of local waterways.

Horning said derelict vessels in “open navigable waters” causing a threat to the public’s safety are the FWC’s foremost priority.

According to the Charlotte County Sheriff’s Office, the marine unit cited the operator but not the registered owner for failing to have valid registration.

“He has not paid the citations and he also failed to show up for court, a warrant has not been issued by the clerk at this time,” wrote Katie Heck, CCSO spokesperson in an email to the Sun. “When a vessel is tied to, moored to or grounded on private property they are not eligible for the (state and local) programs. It is similar to someone who has abandoned a vehicle on private property, the government does not step in and tow it from that property.”

The sheriff’s office would not provide the names of the owner or the operator.

“There is and has been an ability for the property owner to use the process … remove the derelict vessel on their own using the abandoned property statutes,” he said. “The best outcome for the property owner is the advice of legal counsel. I hope that with this guideline and policy change for our officers, more of these derelict vessels can be removed and properly disposed of.”

“FWC in the past has not investigated derelict vessels that were tied or attached to private property,” Horning said. “This will be changing in our policy after our Derelict Vessel Grant guidelines are changed with the adoption of rule at the end of this month.

“If that situation exists and the vessel is derelict, the officer can charge the vessel owner with derelict vessel charges and if they do not remove it from the water, can authorize the vessel to be removed and disposed of including the use of state derelict vessel funding in the process,” Horning said.

Dietz said she didn’t know about the pending rule changes. She said she plans on calling FWC for help.

“This boat has already created damage to a section of the dock,” she said. “We believe it is a safety concern for other boaters.

“We didn’t ask for this problem and hope the county or state will work with us.”