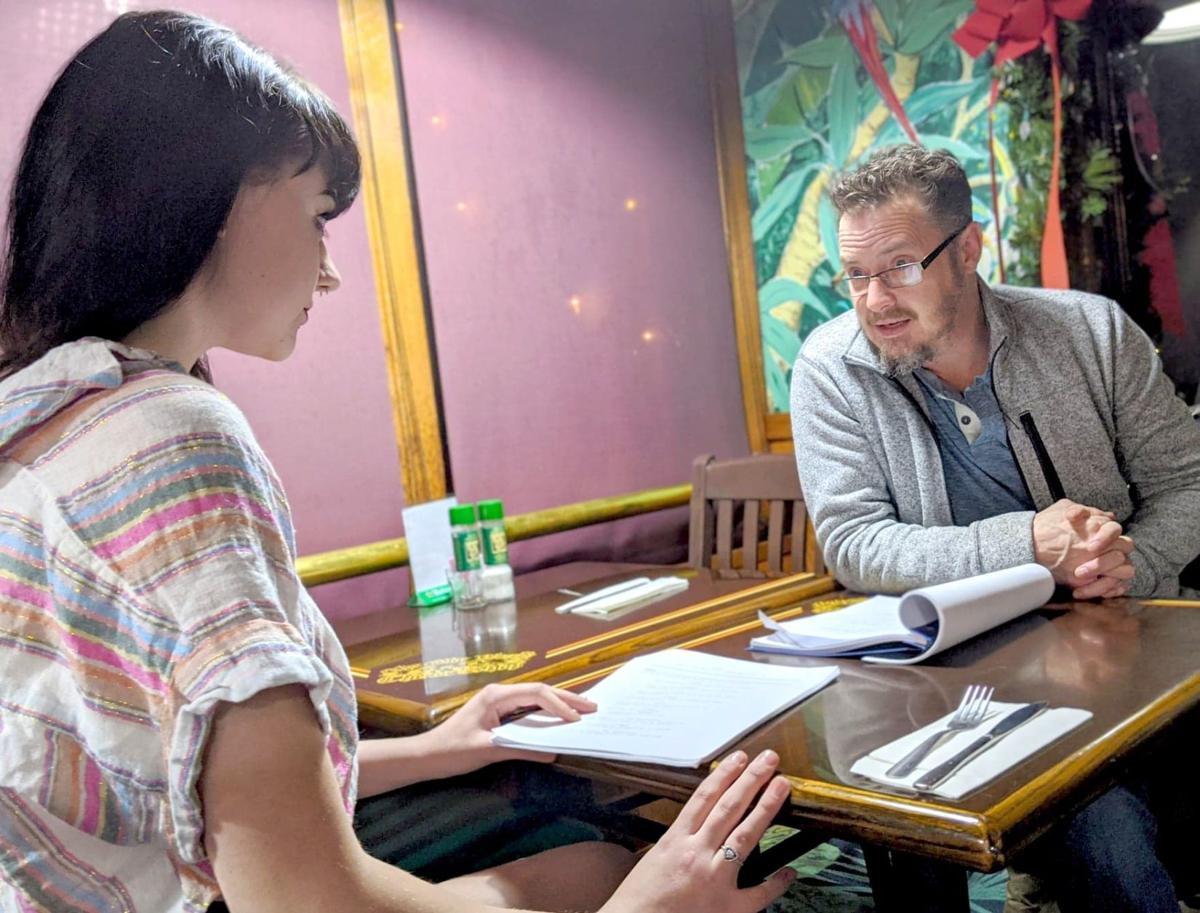 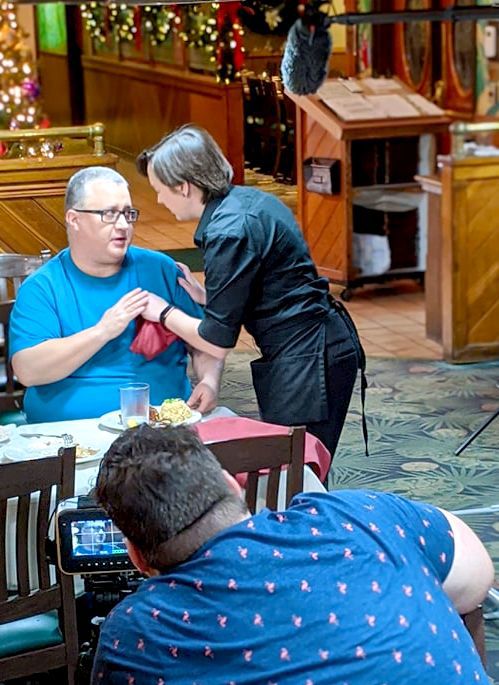 Alexis Sears plays a flirty waitress in a scene with Erik Lundrigan. Both are local residents who were cast for the film “Killer Keg” which filmed in North Port, Englewood and Port Charlotte. 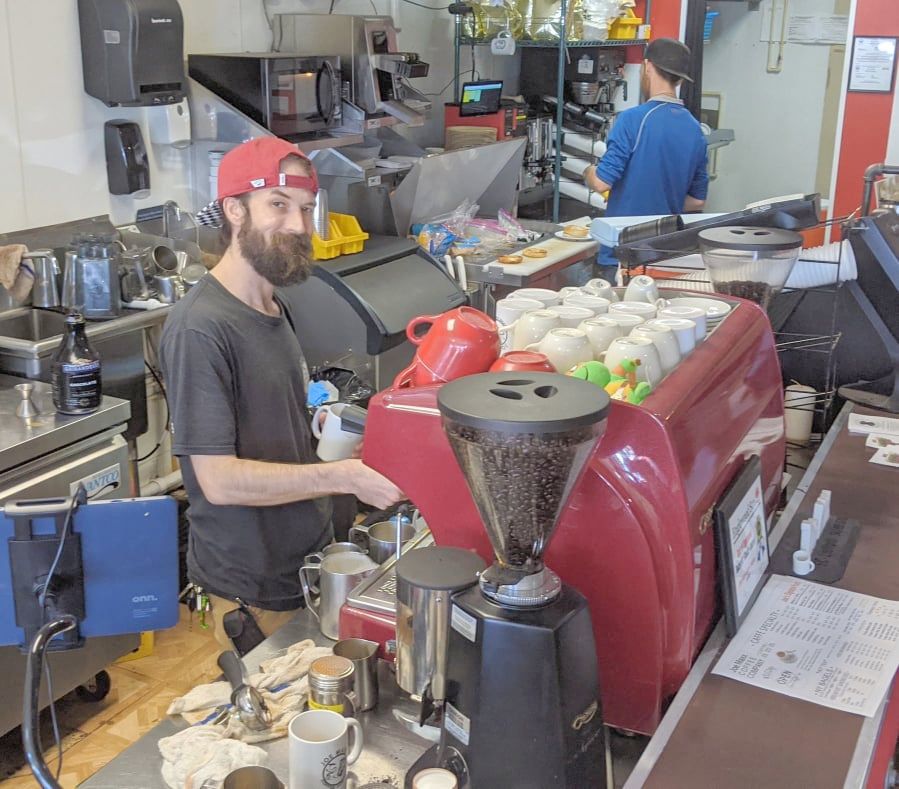 John Watson, manager and head barista at Joe Maxx Coffee Co. on Dearborn Street, was at the cafe recently during the filming of “Killer Keg.” 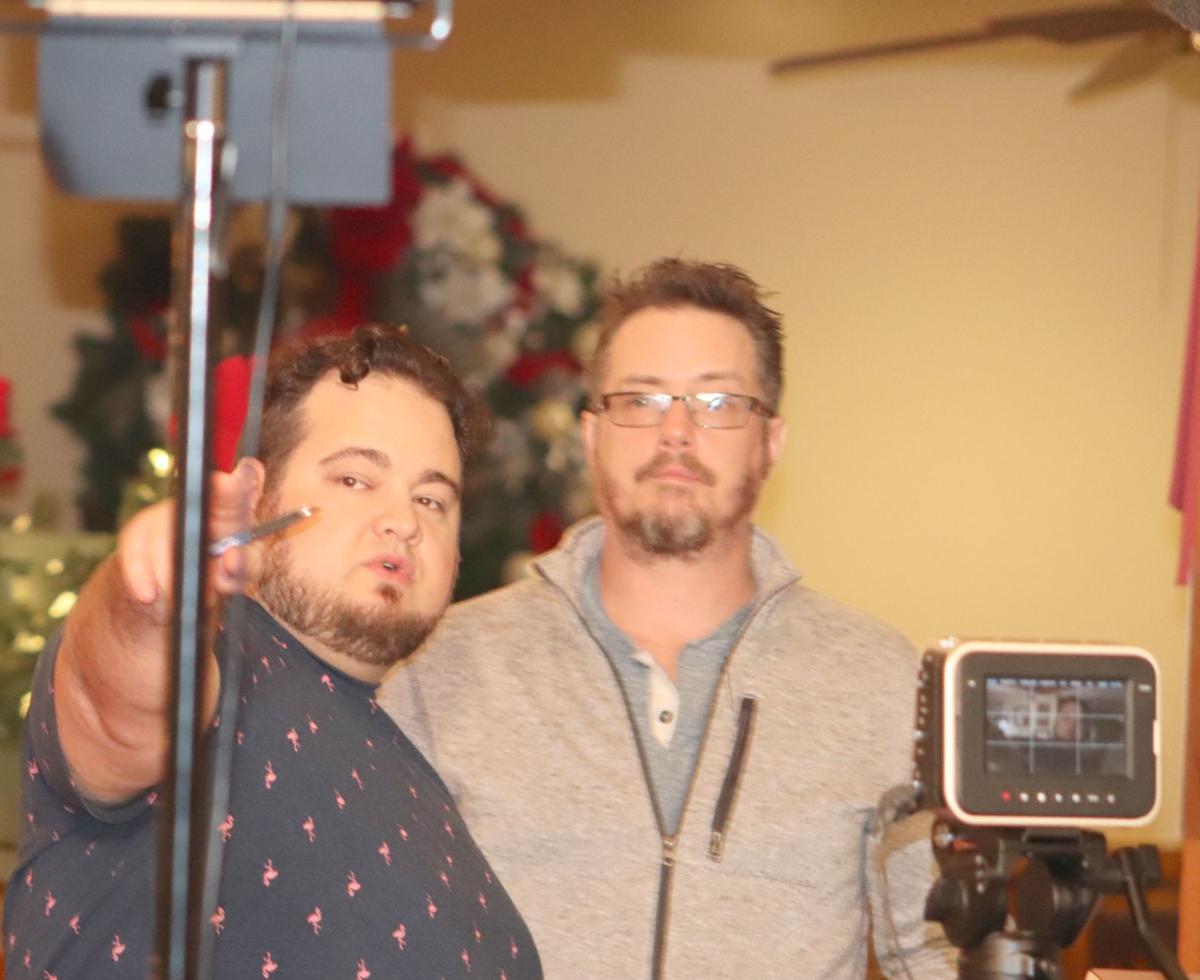 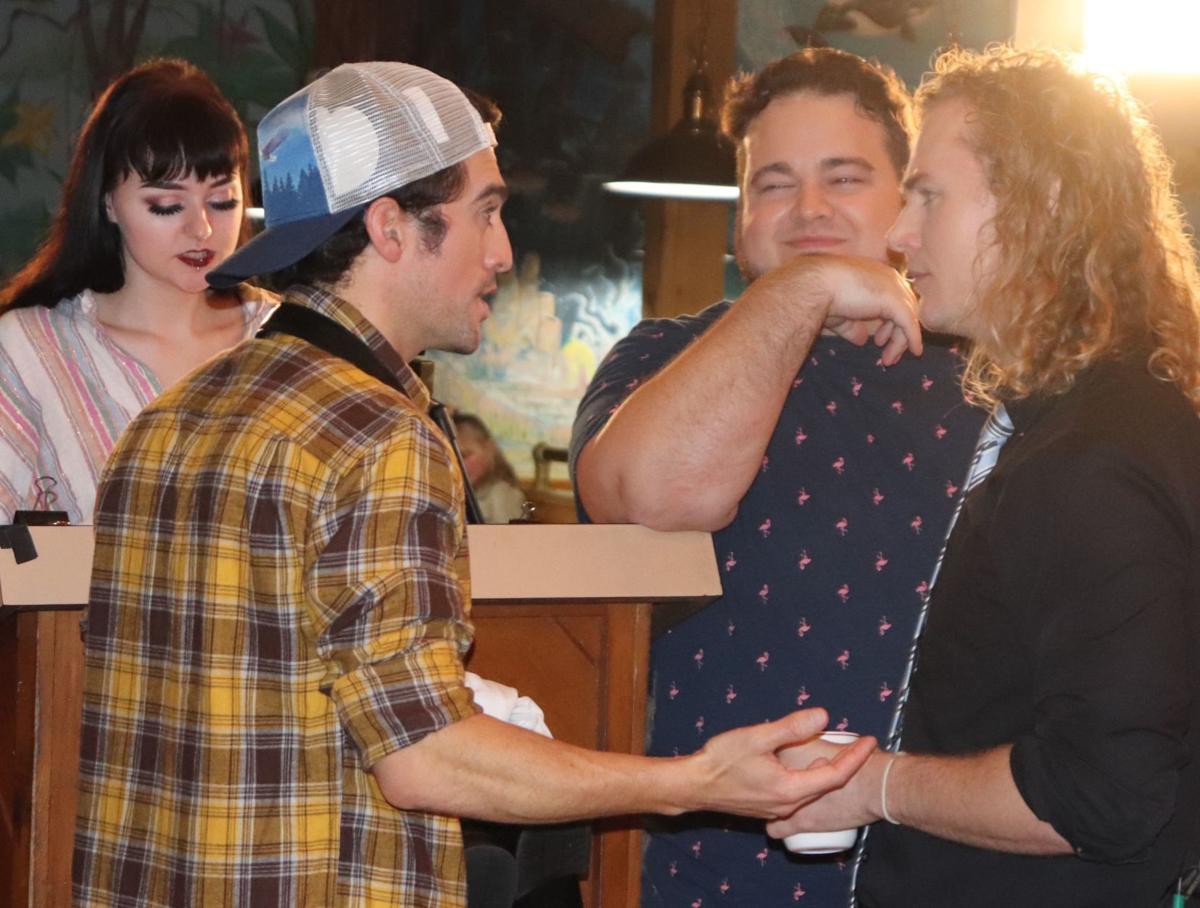 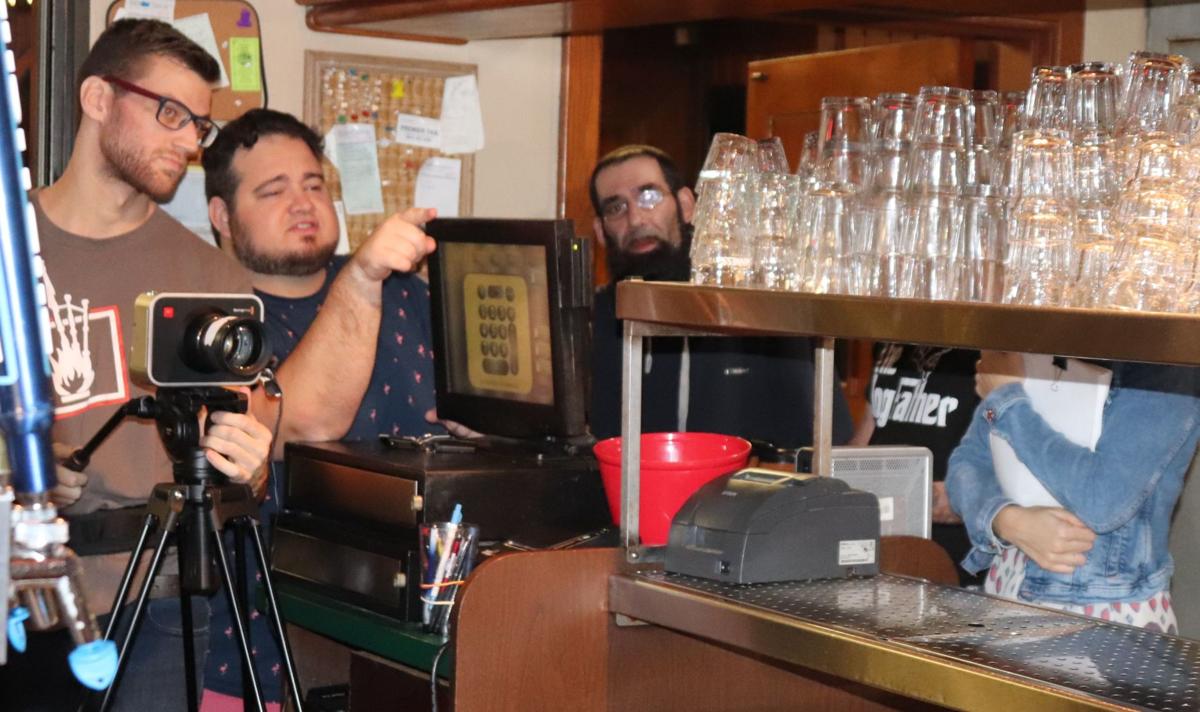 Director Brad Leo Lyon, center, sets up a shot in the bar at the Olde World Restaurant.

The Olde World Restaurant owners were asked to keep up Christmas decorations until the February filming of “Killer Keg” last week. 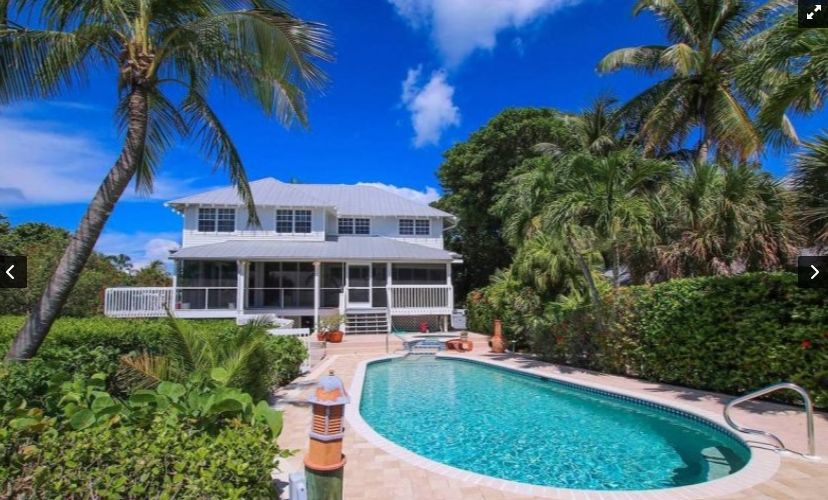 Scenes from the movie “Killer Keg” were shot locally including a rented beach house in Charlotte County.

Alexis Sears plays a flirty waitress in a scene with Erik Lundrigan. Both are local residents who were cast for the film “Killer Keg” which filmed in North Port, Englewood and Port Charlotte.

John Watson, manager and head barista at Joe Maxx Coffee Co. on Dearborn Street, was at the cafe recently during the filming of “Killer Keg.”

Director Brad Leo Lyon, center, sets up a shot in the bar at the Olde World Restaurant.

The Olde World Restaurant owners were asked to keep up Christmas decorations until the February filming of “Killer Keg” last week.

Scenes from the movie “Killer Keg” were shot locally including a rented beach house in Charlotte County.

While waiting to film his scene at 3:38 a.m., actor Jeremy London looked up from his Stephen King novel “Outsider.” Not ready yet, he takes his sneakers off and sinks back into the murder mystery.

A few feet away, “Killer Keg” director and producer Brad Leo Lyon is framing shots from his upcoming horror-comedy movie.

At 4 p.m., Lyon is ready for London to come to the front of the Olde World Restaurant in North Port. Hours earlier, London and Victoria Main, the 18-year-old niece of the sound designer, already rehearsed their lines together. London told her to relax, she’d do great.

After 45 hours of filming at the local restaurant, Lyon’s film about friends who held an old-fashioned “kegger” to cheer up a co-worker who was dumped by his girlfriend began to gel together.

Like in the movie “Groundhog Day” and “Happy Death Day,” where characters relive the same day over and over, the “Killer Keg” creates a similar experience for a younger crowd.

Main’s character uses her short skirt and high heels and as a distraction for her boss, Ned Needleston, played by London, to help her party animal co-workers Peter and Phillip, who keep reliving the same day. Needleston, a much older man, stares at Main’s backside after she asks if she sat in something messy at the restaurant. It’s just enough time for Peter and Phillip to get back into the restaurant where they were the day before without Needleston noticing.

Between takes, Main, a makeup artist turned actress, giggled at the provocative story line, all the while avoiding eye contact with her nearby uncle, Daimon Glenn, on the set.

When Lyon yelled, “cut,” London told Main to pretend her uncle wasn’t watching or listening to the dialogue.

“I play a slimy restaurant manager,” London told the Sun during the recent three-day Lyon Productions shoot at restaurant. “It’s just a cameo role in the movie. I have a couple of racy scenes.”

London said he hasn’t acted on this side of Southwest Florida, but likes it here and loves traveling for different roles. The “Party of Five” and “7th Heaven” actor said he’s headed to upstate New York for a role in March.

“What’s up with Hurricane Charley’s? I saw a sign that said looters will be shot,” he said. “I wondered if it was left over from a real hurricane or if it was added to the restaurant after it.”

After about five takes, Lyon yelled “Cut, I’m happy.” The crew moved on to a new scene between Case and Australian-born actor Russell Jeffrey, who voiced the animated series “The Woodlies” in 2012 and starred in “The Tunnel” in 2011.

“What I like best about acting is the ability to take people on an adventure with my character,” Jeffrey said. “It’s all about the entertainment factor. Someone could be having a bad day and watch a movie and it can brighten up their day.”

Lyon said he wanted to hire more locals to play characters for his movie and be a part of the production team, but the area is limited in acting professionals.

Alexis Sears shed her real-life Charlotte County Sheriff’s Office dispatcher job for a few days to become a flirty waitress on the set.

“I’m an introvert,” said the 24-year-old, who grew up here locally. “When I saw on Facebook (in August) they were looking for actors and extras, I told my husband I should try out and do something outside my comfort zone. I did. I waited all day in line with about 700 other people.”

Like others, Sears read the lines to the script during her audition at the Charlotte Harbor Event & Conference Center. She was called back to read them again. Then she got the part. She said knowing the lines in advance helped her prepare for several days of shooting the film. She was also the associate producer on the film.

Lyon rented a home in Port Charlotte, where he filmed many scenes in 14 days. Prior to production, he scouted many areas and businesses in the region to shoot “Killer Keg.”

Before Christmas, Lyon held a cast dinner at the Olde World Restaurant. A waitress heard Lyon was a producer and offered the 33-year-old restaurant as a location to film. Owners Christine Zagrobelny, Joe and Teresa Skoczylas agreed to leave all the Christmas decorations up until February as props for the movie set. They offered their chef and night manager to help with food needed for the scenes. Most of the electronics in the restaurant like the ice machines and clocks were unplugged during the shoot for sound quality. Scenes were filmed after the restaurant closed.

Because the bathrooms are small, the team recreated a scene in a larger area of the restaurant.

Lyon also visited Englewood looking for an ideal location for the movie and discovered Dearborn Street. He spoke to business owners and liked the hometown look of Joe Maxx Coffee Co., 450 W.Dearborn St.

The crew recently filmed scenes just after the cafe closed at 3 p.m. They were there until 3 a.m.

“I had no idea what they were actually filming, but it’s nice to be able to help the producer out with his creative process,” said John Watson, manager and head barista. “They have a lot of hoops to jump through when making a movie, I think we helped make it easier for them.”

Lyon, who produced dozens of movies, including “The Haunting,” and “Little Creeps” starring Joe Estevez, Robert Z’Dar, Dustin Diamond, Lark Voorhies, and wrestler Jake “The Snake” Roberts, said he’ll begin editing soon and is unsure of the “Killer Keg” release date. It’s one of three movies he has in the works. He wrote the “Killer Keg” script before both of his parents Leo and Joann Lyon passed away in the same year. He put the movie on hold and is now rewriting his film “Brock’s Diner vs. The Undead” to include tributes to his parents who worked with him to build his production company. Lyon is also making his film “Thursday the 12th” into a theater production in the spring.

“I don’t need a lot of sleep,” joked Lyon. “Most films have a large number of opportunities to hire locals with experience. It was a little challenging in this area. I did have to bring in more people than I thought. But, I wanted to bring a film to an area that doesn’t get these types of experiences.”

Anne and Dean Seller of Port Charlotte tried out as extras. After they got the parts, they began helping on the set. They moved props and helped the actors, sound and camera men.

“I thought it would be kind of cool to be a part of a locally made movie,” Anne said. “It’s taken a lot of time and I still work full-time, but I’ve met a lot of great people. It’s been really fun.”