You are the owner of this article.
Edit Article Add New Article
I want to
Publications
Subscribe
Homes for Sale
Cars for Sale
Jobs
Classifieds
E-Paper
News Archives
Calendar
App
Public Notices
Your Newspapers
Contact Us
1 of 8 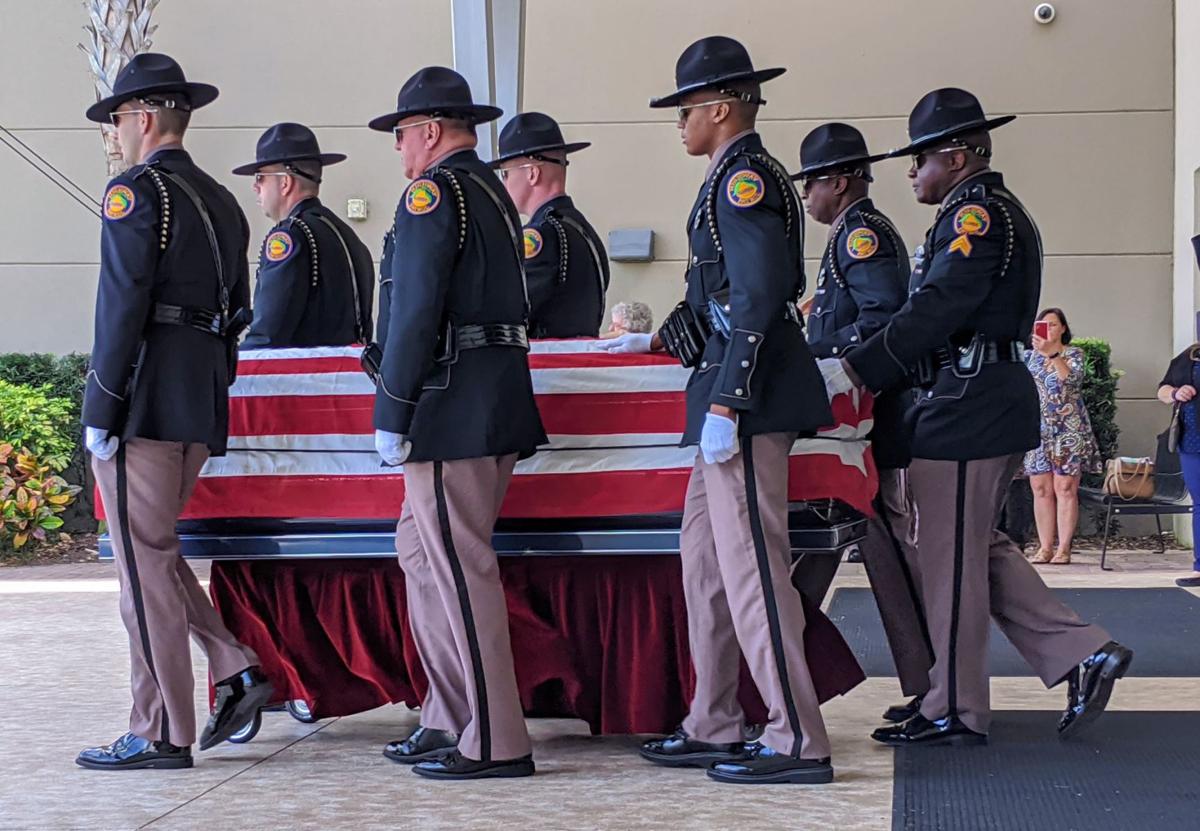 Members of the Florida Highway Patrol carry the body of fallen Trooper Joseph Bullock during a funeral ceremony Thursday in Sarasota. 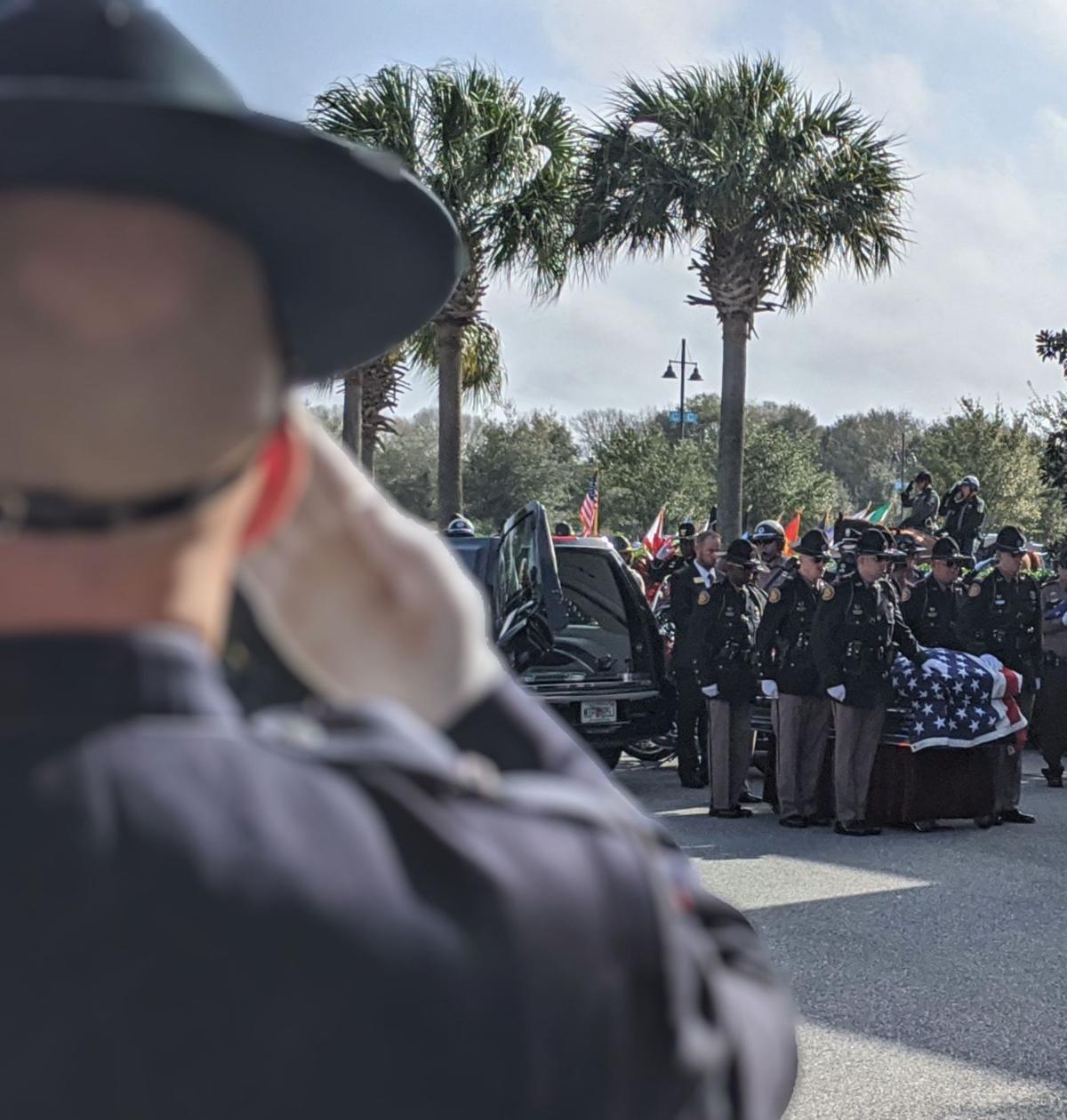 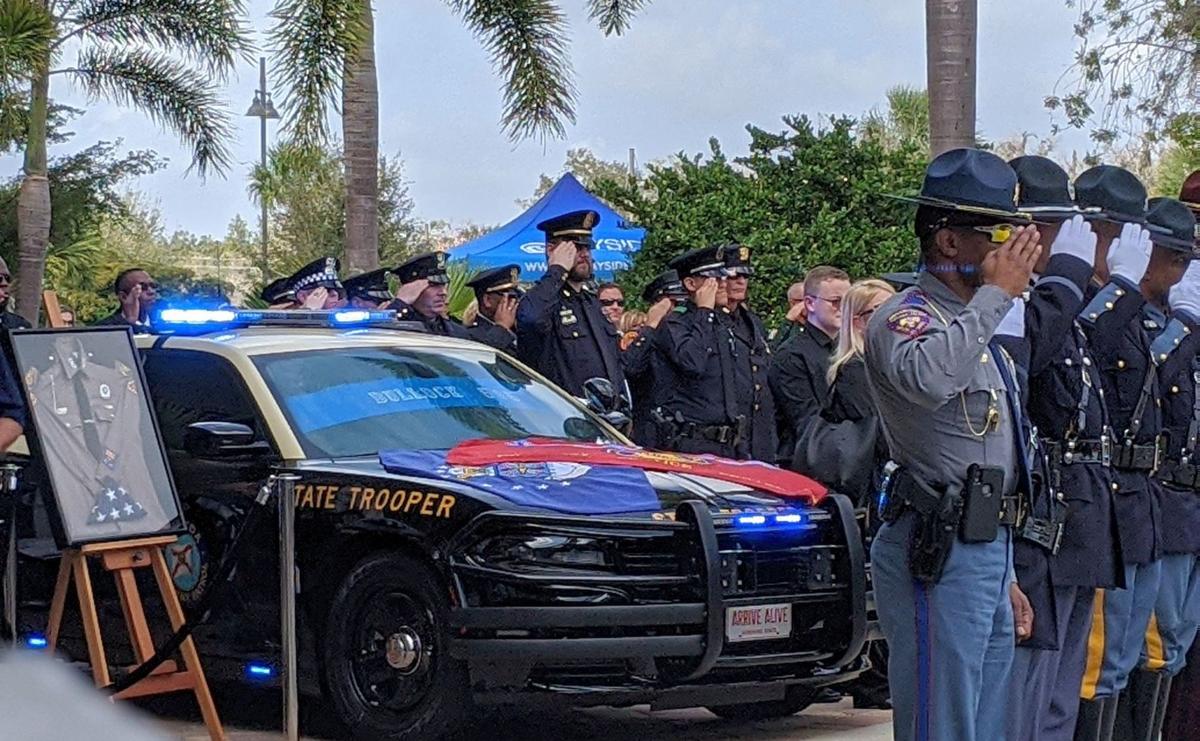 Members of the Florida Highway Patrol give a send-off to Trooper Joseph Bullock at the church. 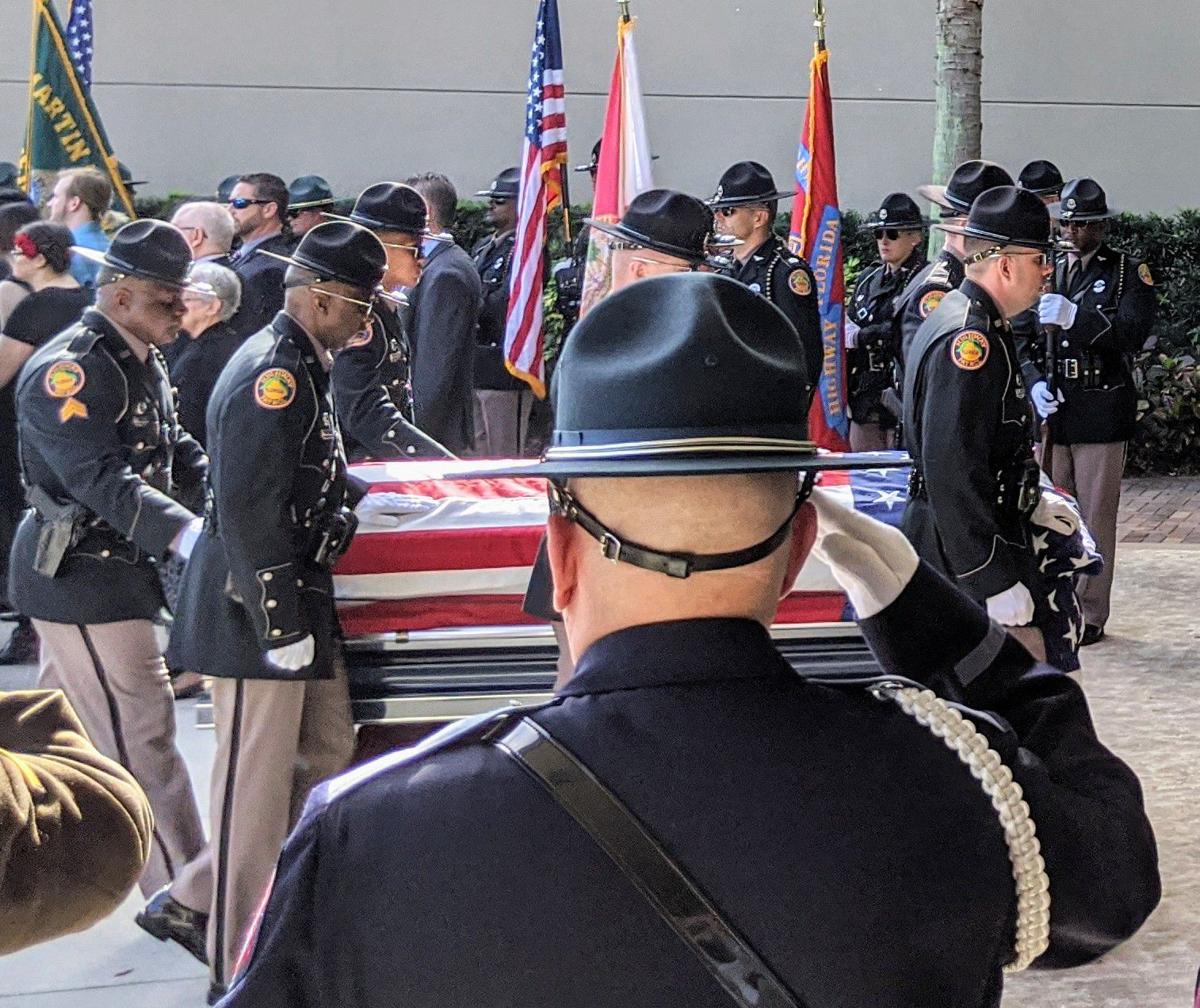 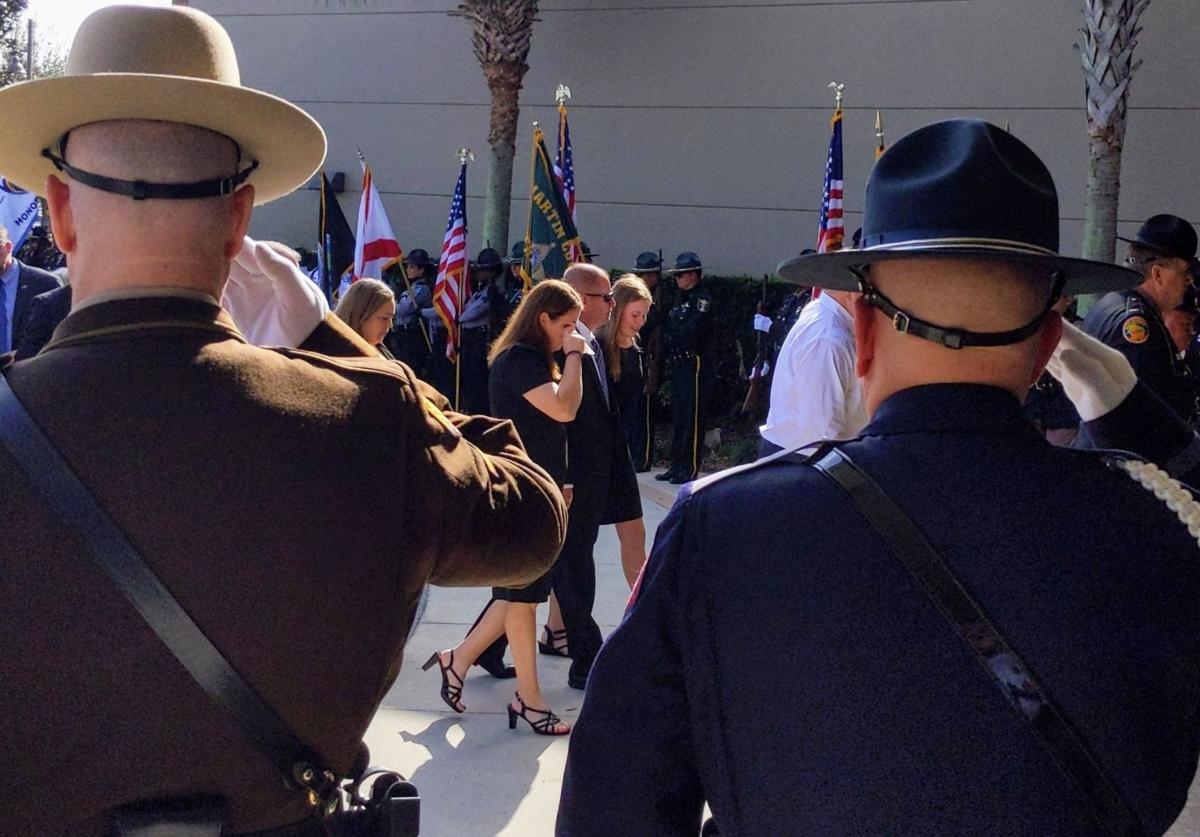 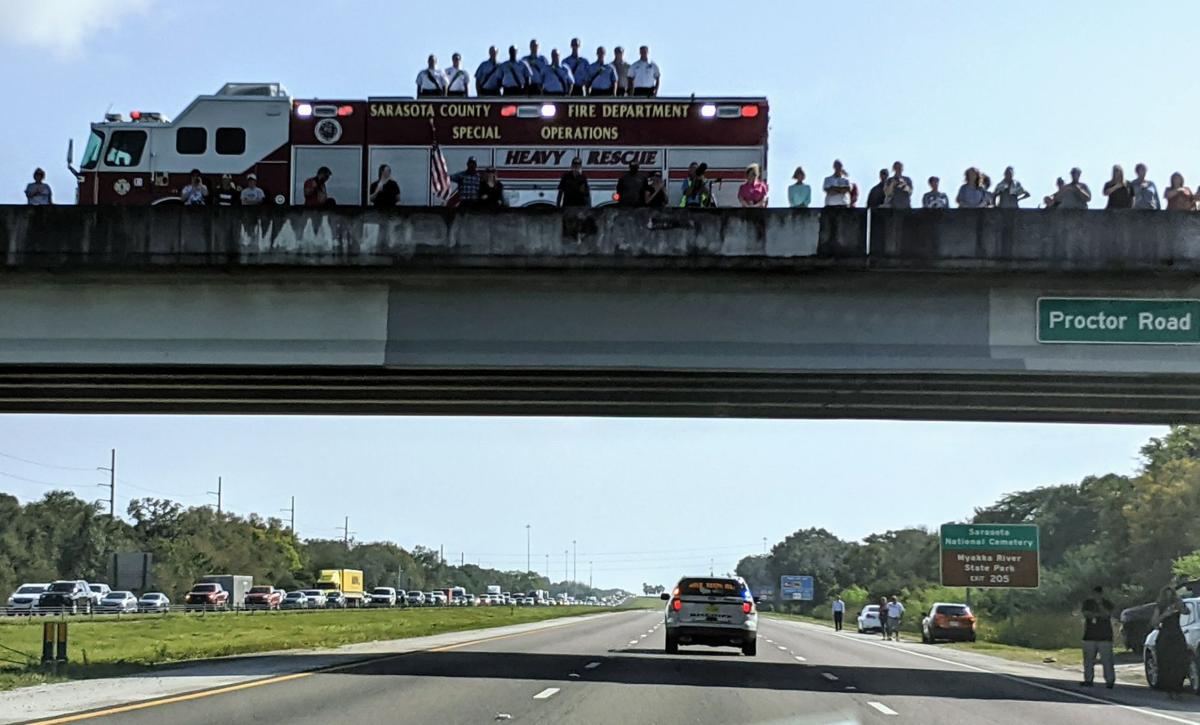 Sarasota County Firefighters join thousands lined up along Interstate 75 in Sarasota to pay their respects to Trooper Joseph Bullock as his procession passes. 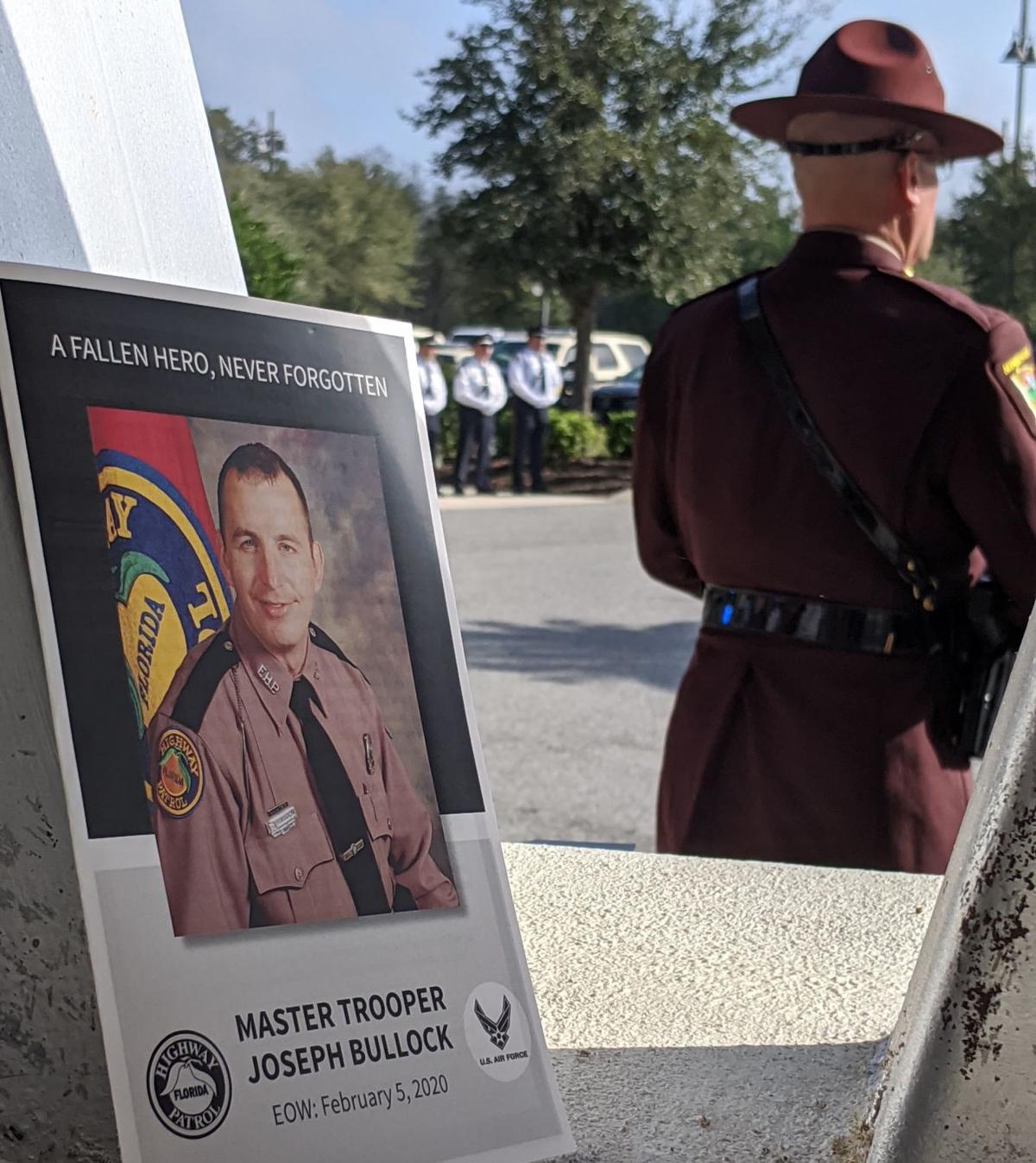 Troopers wait for the service to begin to remember Joseph Bullock. 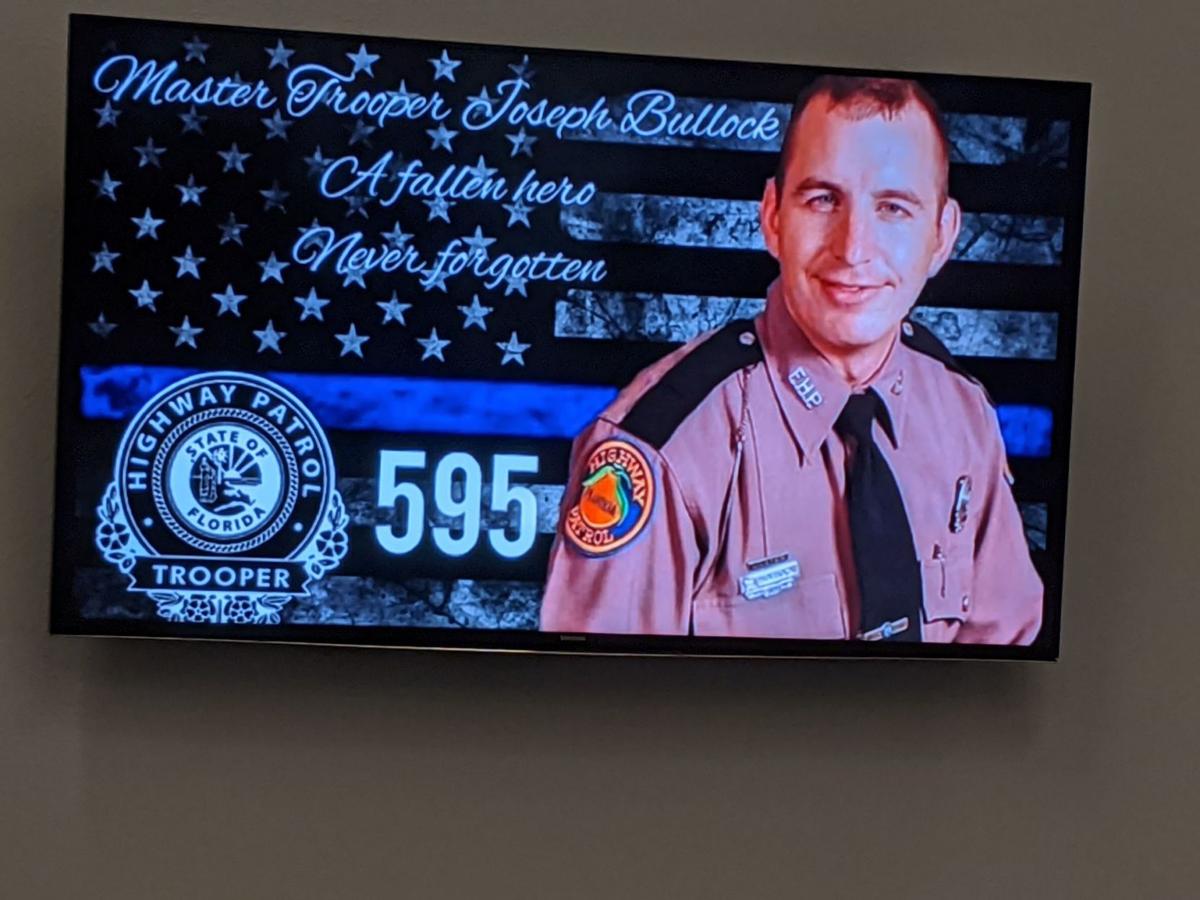 Members of the Florida Highway Patrol carry the body of fallen Trooper Joseph Bullock during a funeral ceremony Thursday in Sarasota.

Members of the Florida Highway Patrol give a send-off to Trooper Joseph Bullock at the church.

Sarasota County Firefighters join thousands lined up along Interstate 75 in Sarasota to pay their respects to Trooper Joseph Bullock as his procession passes.

Troopers wait for the service to begin to remember Joseph Bullock.

Lowe enjoyed Bullock’s infectious laugh and sense of humor. The pair met in basic training after Bullock graduated from Lemon Bay High School in 1995. They were stationed at Minot Air Force Base in North Dakota before each heading to different parts of the world.

Lowe recalled how Bullock broke his windshield one freezing day in North Dakota.

“Being a Florida boy, Joe poured water on the windshield and it cracked,” Lowe recalled.

Lowe’s story was one of a couple of times a crowd of more than 1,400 laughed Thursday at Bullock’s memorial service at Bayside Community Church in East Bradenton.

Several times Lowe choked up while talking about how much Bullock loved being a state trooper, a son, brother, uncle and friend.

Lowe was joined by hundreds of law enforcement and officers from Alaska, Virginia and Delaware who gathered Thursday in Bradenton and Sarasota to pay respects to Bullock who was killed last week while helping a stranded motorist. Florida Gov. Ron DeSantis joined as well, as did Bullock’s family and friends from this area, including Englewood, where he and his sisters went to school.

After taps played, members of the Air Force gave a flag to Bullock’s father Jon, a retired corrections officer. Jon and his wife Val, and daughters Jessica and Katie of Rotonda, were mentioned several times by Bullock’s FHP co-workers.

On Feb. 5 at about 10:15 a.m. Bullock, 42, stopped on Interstate 95 in Martin County to help what he believed was a disabled motorist. One of the men in the vehicle shot and killed Bullock while he was filling out paperwork in his patrol car.

A witness flagged down Riviera Beach police officer Jemel Headings who was on his way to work in his personal vehicle. Headings shot and killed Franklin Reed III, 30, of Palm Bay.

Headings was asked to come onto the stage at the ceremony. Applause rumbled through the church as the crowd gave Headings a standing ovation for trying to save Bullock and stopping Reed from harming anyone else.

Several friends who spoke at the two-hour service explained how Bullock impacted the lives of so many in other law enforcement as a training officer, leader and a friend during his 19 years at FHP. They said he ate, slept and breathed his work. He loved it so much his supervisor fought with him over taking vacation time each year.

Sgt. Mellow Scheetz of Troop L said Bullock trained her and many others.

“He had a hand in training more than 1,000 troopers,” she said. “And that number will only grow as those troopers become trainers.”

Capt. Ryan Lloyd, Fort Pierce District Commander, said he recently worked with lawmakers this week to have stretch of I-95 where Bullock was killed dedicated as the Joseph Bullock Memorial Highway from mile marker 105-110 in Martin County.

Bullock is the only state trooper to die in Martin County.

Many photos were shown during a slideshow of Bullock. One was for him becoming the Trooper of the Month for saving a person trapped inside an overturned van on I-95. Several pictures showed Bullock with his dog, girlfriend and family members.

Bullock was also remembered as a die-hard Pittsburgh Steeler’s fan. FHP Sgt. Michael R. Lanam knew Bullock for 18 years. The two argued that the Steelers were better than Lanam’s 49ers.

Lanam held a yellow-and-black Terrible Towel, a fan’s symbol for team support. He swirled it over his head and said “today we are all Steeler’s fans in Joe’s honor.”

Another of Bullock’s best friends, Trooper Michael Coulter, said the pair loved to talk about movies. They had hundreds of conversations by citing movie lines.

Bullock trained Coulter. Even after Coulter was transferred, they kept in touch. Bullock was working a lot on the interstate. Coulter heard Bullock might need a partner. He transferred back to the L Troop.

“Frick and Frack were back together again,” Coulter said, adding the lyrics to the movie “Furious 7.”

“It’s been a long day without you, my friend, and I’ll tell you all about it when I see you again,” he said. “I will miss you my dear friend.”

Sarasota and Charlotte County sheriff’s deputies, North Port and Venice police, and many more paid respects. Hundreds of other police vehicles lined Interstate 75 in a sendoff to Bullock as the procession moved from Bradenton to Sarasota National Memorial Cemetery.

Along the drive at Proctor Road overpass, the Sarasota County firefighters hung flags from their trucks as motorists held signs and flags honoring Bullock. At the ceremony, there were full military honors, including a 21-gun salute.

Bullock was remembered for his two sayings, “I got this” and “I got your six.”

“He was selfless,” FHP Col. Gene Spaulding said. “To his parents, Val and Jon and his two sisters Jessica and Katie and the extended family. Thank you for sharing Joe with us. He was the kind of trooper we all strive to be.”