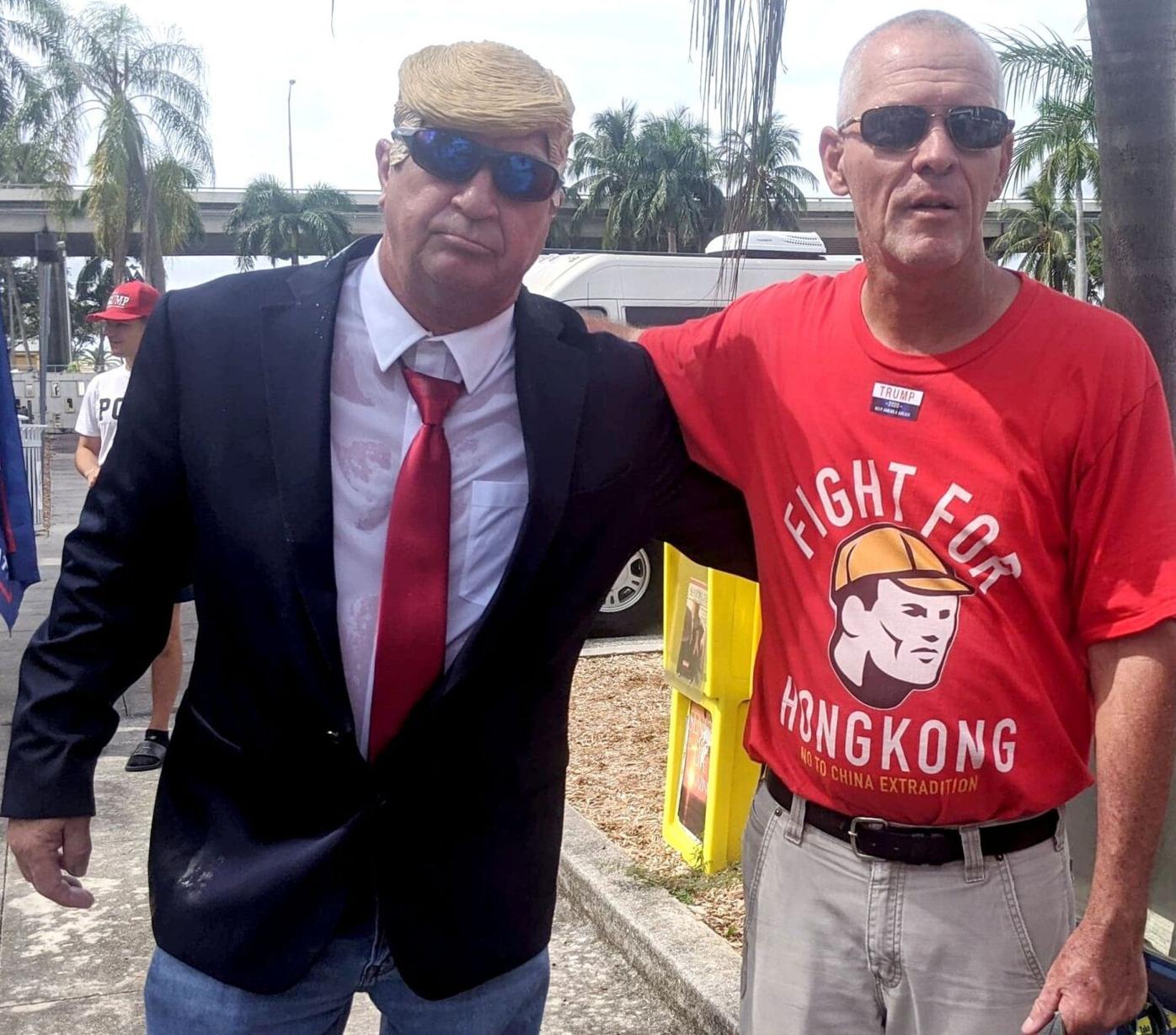 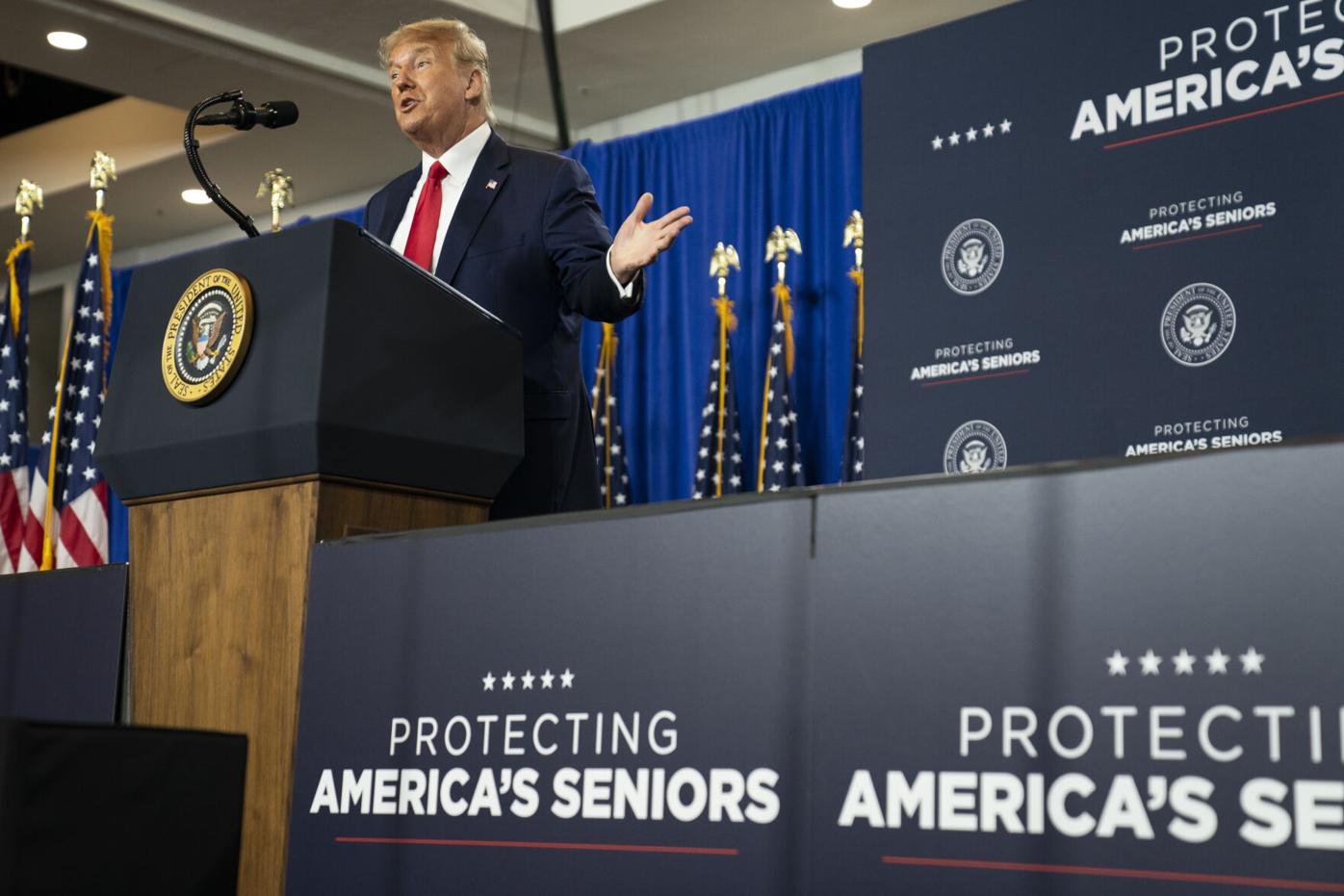 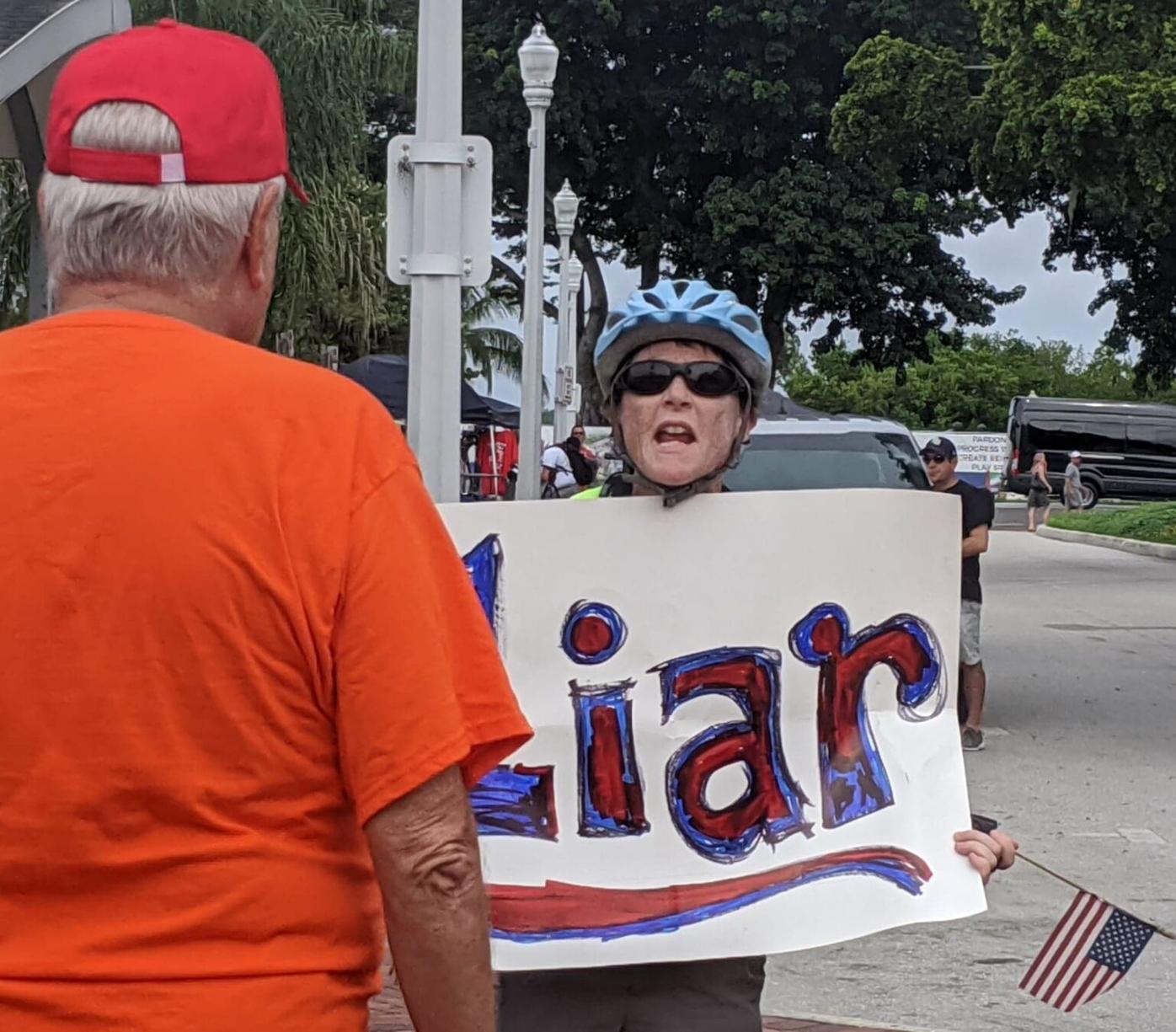 Kathy Hudson, who caught COVID-19 in March, backs away from a Trump supporter at the Fort Myers rally. 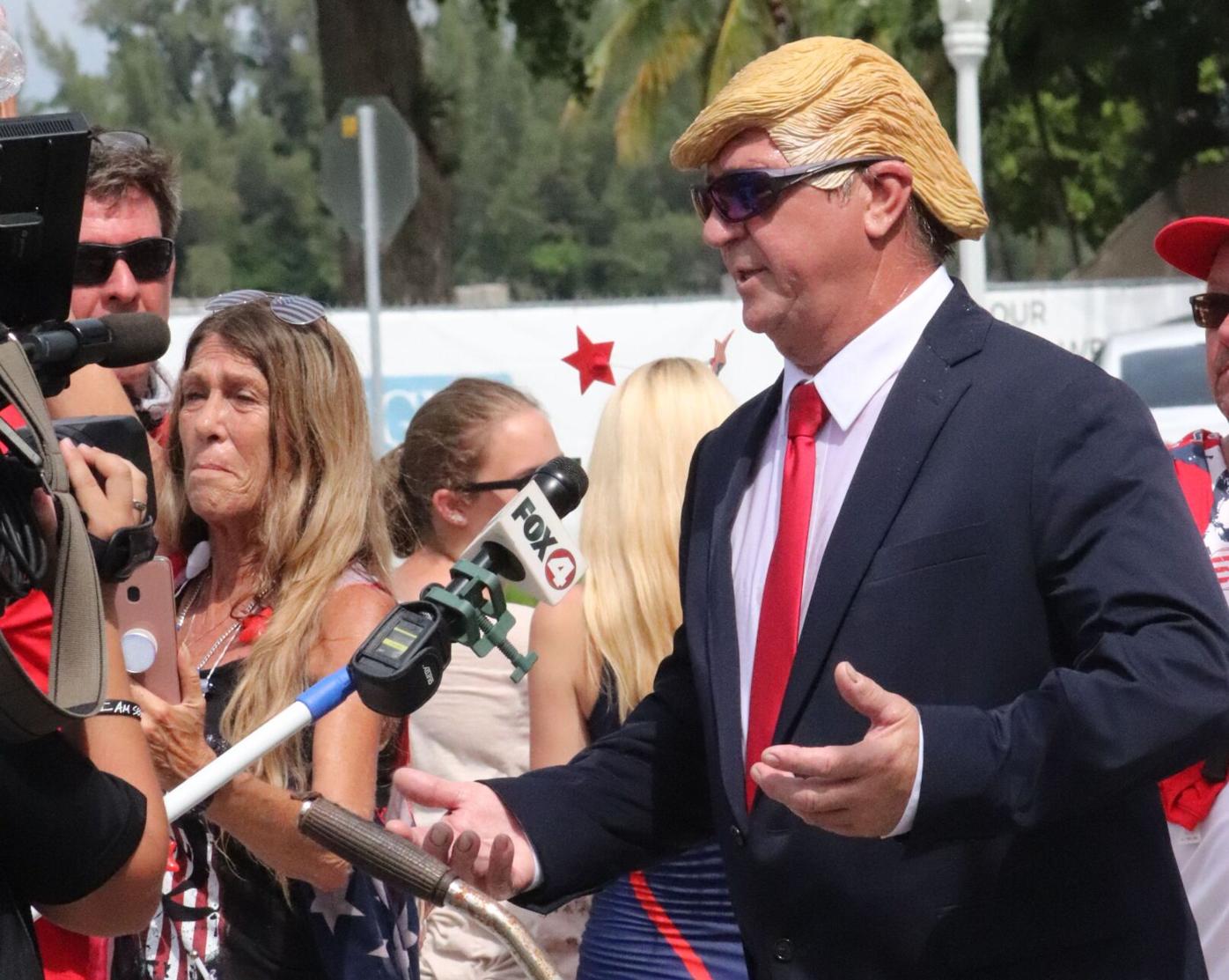 Scott Walz is not the real Donald Trump but impersonated him Friday in Fort Myers for the television cameras. 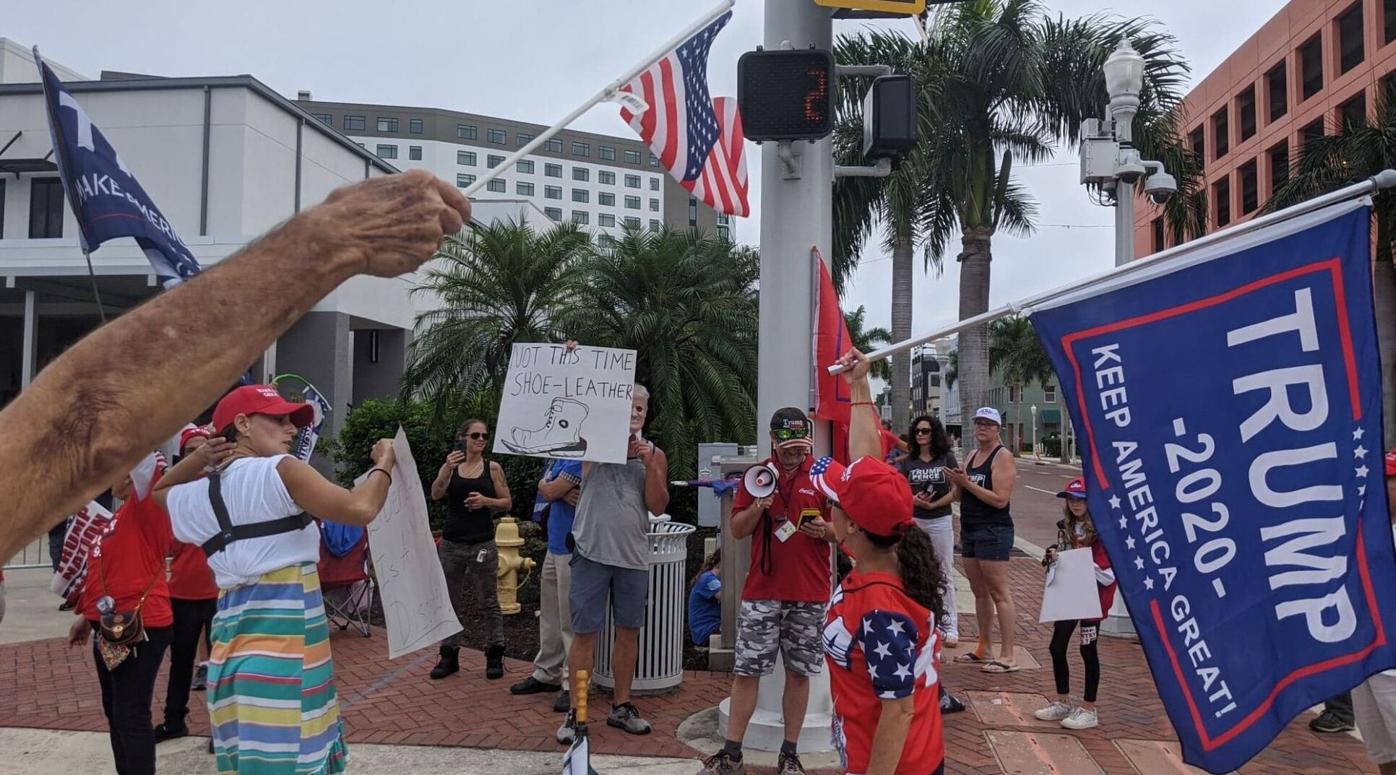 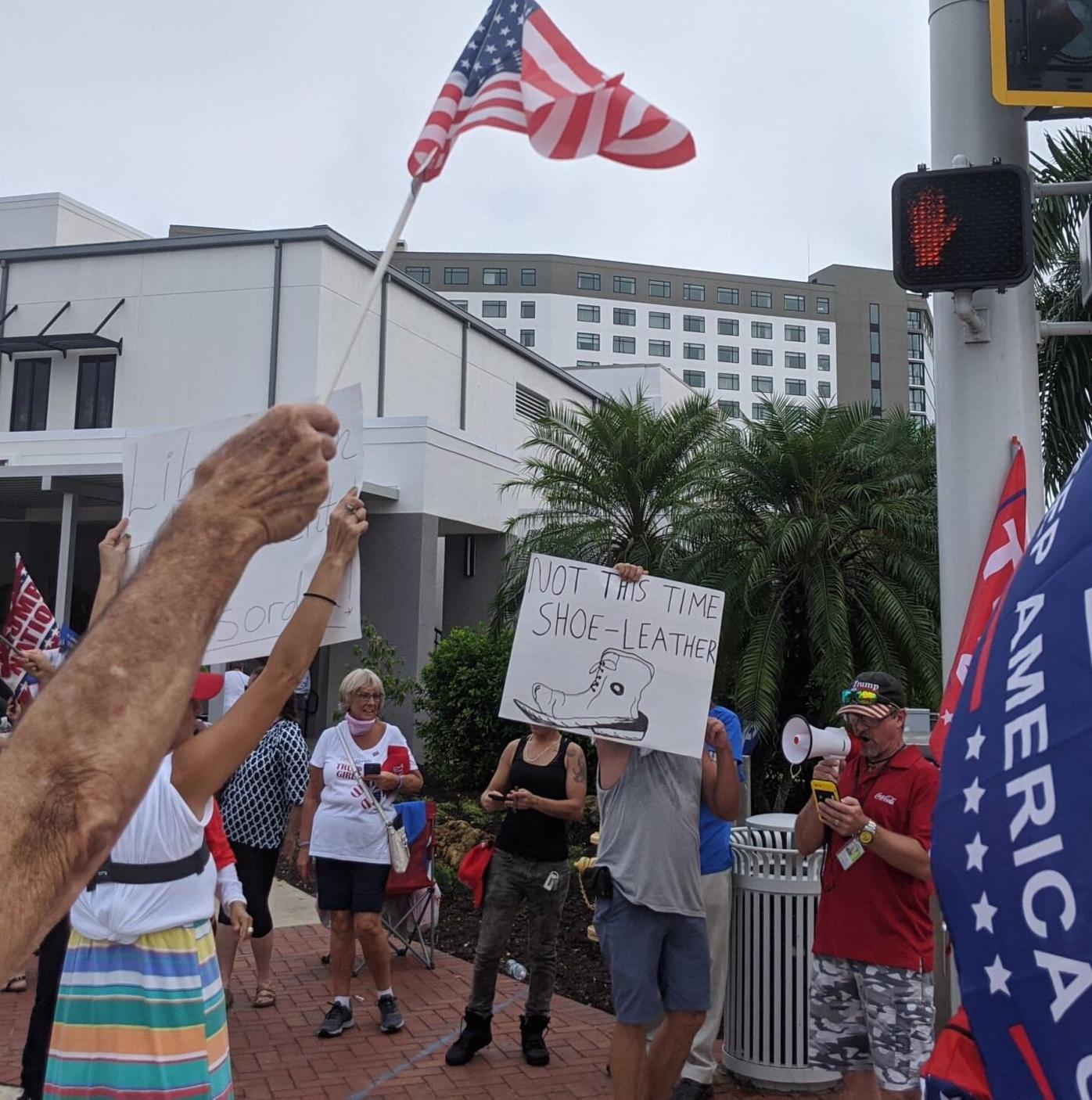 Trump supporters gathered near the Caloosa Sound Convention Center in downtown Fort Myers to catch a glimpse of the president. 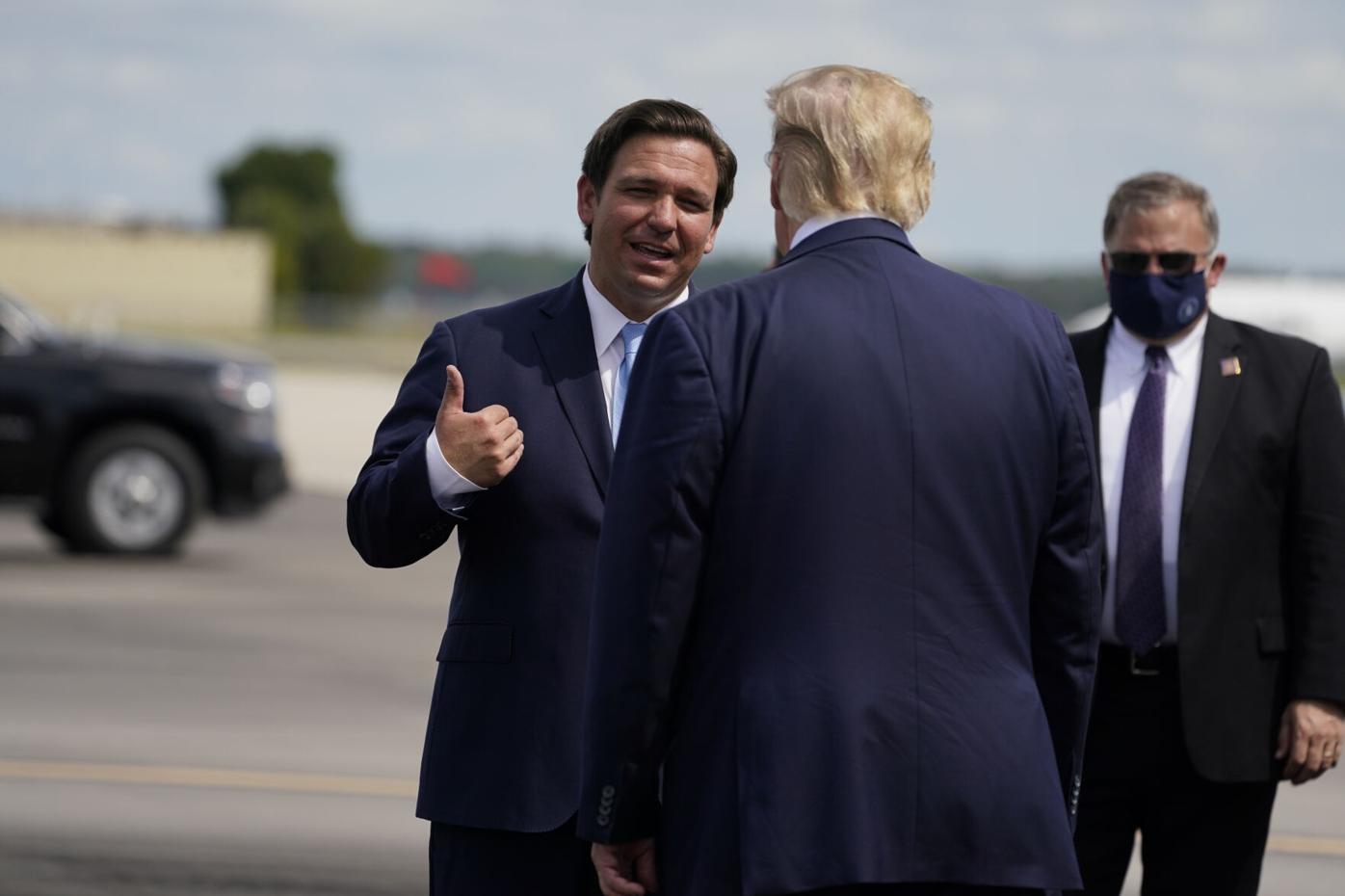 Kathy Hudson, who caught COVID-19 in March, backs away from a Trump supporter at the Fort Myers rally.

Scott Walz is not the real Donald Trump but impersonated him Friday in Fort Myers for the television cameras.

Trump supporters gathered near the Caloosa Sound Convention Center in downtown Fort Myers to catch a glimpse of the president.

FORT MYERS — Scott Walz couldn’t walk more than five feet without people stopping him to take a selfie Friday at the Trump rally in Fort Myers.

With the president in Fort Myers for an invitation-only speech, the Port Charlotte Trump impersonator was a hit with the thousands waiting to get a glimpse at the presidential motorcade and lend their support to his re-election campaign. Nearly 100 Trump supporters who “were on the list” were welcomed into a private event at the downtown Caloosa Sound Convention Center.

Walz was one of those who didn’t get to go inside. Instead, he was interviewed by several TV news stations and posed with his Trump puckered lips for hundreds of photos with families, some babies, a few dogs and loads of Trump fans.

“I make these plastic wigs and give them away to people who like President Trump,” he said. “I sang karaoke in my Trump outfit in Port Charlotte and people loved it. I’ve only sold a couple of them so that I can make more before the election. People love them.”

Punta Gorda resident Greg Moser was happy to have his photo taken with Walz while waiting to see if the president would drive by the large crowd.

“I sure hope he gets re-elected,” Moser said. “I don’t see the president as being political. I just don’t like what the other side is selling.”

Luke Minosky, 18, was plucked from the crowd and invited inside to hear the president speak.

“I’m a first-time voter,” he said. “I love America. I see what’s going on with all of the violence. I like that we have a law and order president. He is pro-America.”

Trump was campaigning in Florida and Georgia on Friday, states he carried four years ago and are considered must-win states this year to extend his presidency. Following his early afternoon stop in Fort Myers, he was scheduled to head to Ocala for a similar rally.

U.S. Rep Greg Steube, who serves Florida’s 17th Congressional District spanning nine counties in Southwest Florida, was on the guest list of about 400. He didn’t have to wait in line.

“I’m excited to go in and see the president address the seniors,” Steube said. “He’s going to do well in Florida. It’s always nice when the president comes to see the people in your district.”

“We have been working very hard to get the vote out,” she said. “We have been door knocking and calling people. We were a part of the boat parade for Trump. We love what he’s doing for the community.”

“We need four more years of Trump,” she said. “He’s a category for all voters. He’s done more for the black and Hispanic communities. And he wants to do more for our economy.”

Margaret Werchek said she wants Trump to continue building a wall on the Mexico border.

“He’s been fair to our military,” Werchek said. “He has outlined everything he wants done and has done what he promised when it wasn’t blocked. He’s built our economy to be the best in the world. He’s the one who could bring people together by putting America first.”

“I’m so happy to see the president today,” she said. “I want him to continue everything he is doing for the American people.”

Volunteer Lucy Adgate, a Republican supporter since 2015 was also “super” excited to see such energy at the rally.

“I have liked the president since the first time he opened his mouth,” she said.

Someone who doesn’t buy anything the president says is Kathy Hudson. She was the lone person in the crowd holding a sign with one word — “liar.”

“The president has said at least 20,000 lies or misleading statements,” said the 58-year-old, as people nearby booed her. “I came down with COVID-19 in March. I had to pay $120 to Quest Lab and $20 to Lab Corp for tests the president said would be free. I’ve donated plasma twice since. I’ve been blown away by all of his mistrusts. I can’t believe he said he was blessed by God for contracting Covid. I wasn’t. It’s a horrible virus.”

The nearby crowd grilled hot dogs and sang along with Lee Greenwood’s “God Bless the USA” shortly before the president arrived.

Once inside, Trump walked on stage to Lee Greenwood’s song as the crowd chanted “four more years.”

“We love our senior citizens,” Trump told the crowd. “I am honored to be here in Fort Myers to reaffirm my solemn pledge to America’s seniors. I happen to be a senior. I will protect you. I will defend you. I will fight for you with every ounce of energy and conviction that I have.

“My administration is working every day to give our amazing senior citizens the care, support and respect they deserve,” he continued. “As president, I am aware that America’s 54 million seniors have borne the heaviest burden of the China virus. Many older Americans have endured months of isolation, missing weddings, births and graduations, church and family reunions. You know that very well, you knew that all too well. My heart breaks for every grieving family that has lost a loved one … I feel their pain.”

The president also talked about fracking, debilitating society-wide lock downs in Europe, the “democrats” plan to delay the vaccine, the success of his administration bringing more than 2,000 Medicare advantage plans to seniors, North Korea, Hunter Biden and veterans.

“You seniors have protected us and now I as a senior and all of my people are protecting you for your courage, your leadership and your patriotism and your faith. You are in inspiration to us all. And with your help, we will transcend every obstacle, defeat every threat and triumph over every single challenge.”