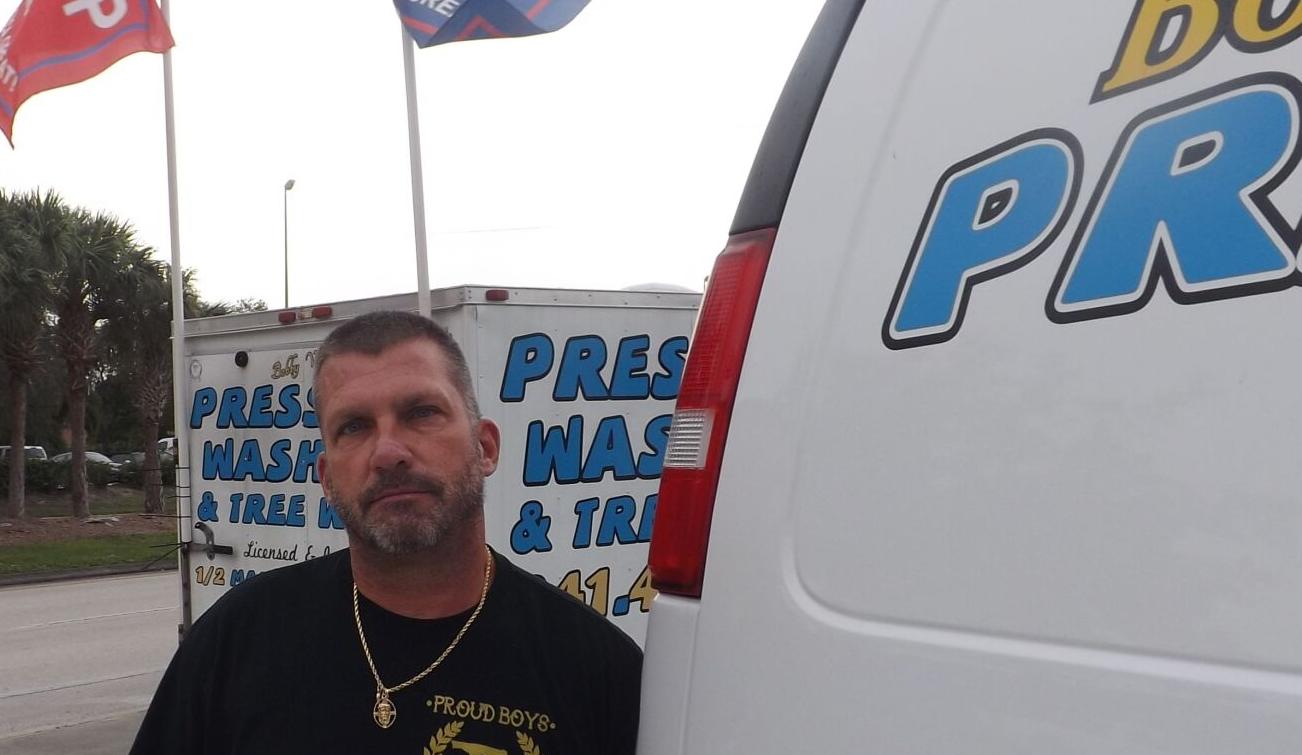 Bobby Van takes pride in being a Proud Boy. The Englewood resident is president of the Proud Boys Florida Zone 5, which extends from Bradenton south to Bonita Springs. 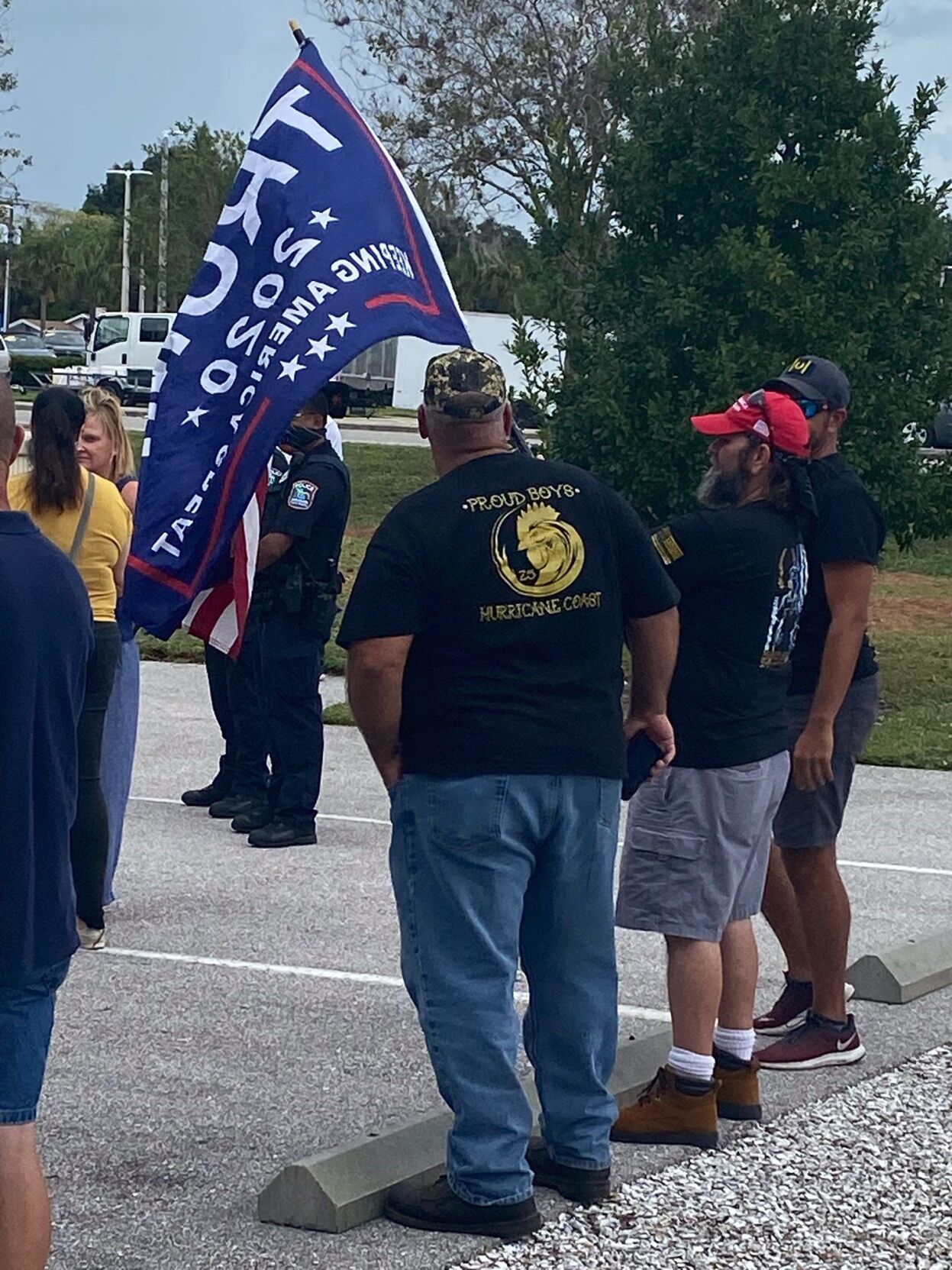 Three Proud Boys made their presence known — and their support of President Trump — at the Sarasota County School Board meeting Tuesday. 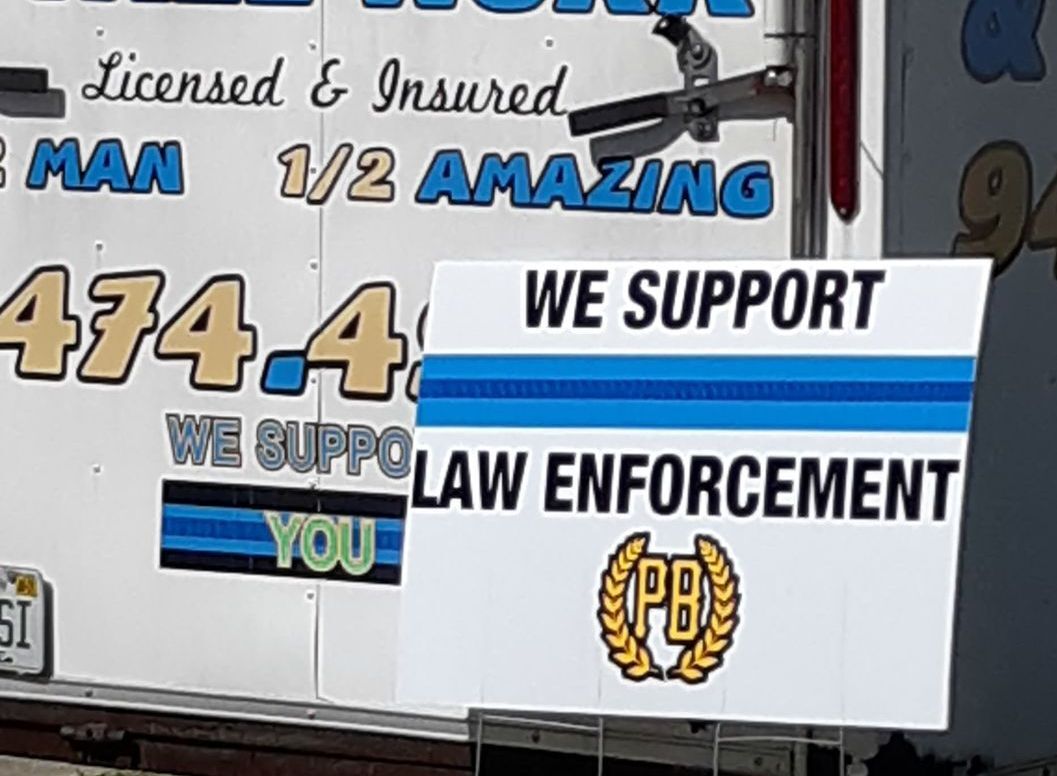 Bobby Van not only announces his support for law enforcement with this sign, he also celebrates Proud Boys.

Bobby Van takes pride in being a Proud Boy. The Englewood resident is president of the Proud Boys Florida Zone 5, which extends from Bradenton south to Bonita Springs.

Three Proud Boys made their presence known — and their support of President Trump — at the Sarasota County School Board meeting Tuesday.

Bobby Van not only announces his support for law enforcement with this sign, he also celebrates Proud Boys.

ENGLEWOOD — Bobby Van is proud to be a Proud Boy.

In fact, Van is a district president overseeing the Proud Boys Florida Zone 5, which extends from Bonita Springs north to Bradenton. He’s been a member for nearly three years. Florida may have 600 to 700 active Proud Boy members. His zone chapter has 80 or more members.

Van, an Englewood resident since 2004, knows he’s lost customers for his pressure-cleaning and tree-trimming business due to his belonging to the controversial group often associated with white extremists, neo-Nazi and other ultra-right groups.

Federal and other law enforcement — including Charlotte County Sheriff’s Office — are now investigating threatening emails sent to registered Democrats in various battleground states including Florida. The emails allegedly were sent by Proud Boys. According to the Associated Press, Iran is responsible for emails meant to intimidate American voters in multiple states, U.S. officials said Wednesday night in calling out both Tehran and Russia for activities meant to interfere in the upcoming presidential election.

And Van added, “We wouldn’t do stuff like that.”

When the Proud Boys first started, Van said, they were more a fraternity of men who enjoyed meeting once a month, socializing and downing a few beers together. “Men just being men,” he said.

“Every article that’s ever been written about (Proud Boys) has made us look bad,” Van said. He then went through a litany of what he does not support.

There may even be some Proud Boys who are politically liberal, but Van doesn’t know any.

He also supports Trump and flies two large Trump flags from one of his trailers.

Van didn’t hide the Proud Boys’ antipathy toward Antifa, a leftist movement of militants in opposition to fascism, white supremacists, and other right-wing extremist groups. The Trump administration this week labeled Antifa a terrorist group, along with the KKK.

“Antifa was attacking people at Trump rallies, knocking off their red MAGA hats off their heads, throwing jars of urine at veterans in wheelchairs,” Van alleged.

The Proud Boys decided “to walk people into events and out of events.”

Three Proud Boys, waving Trump flags, demonstrated and made their presence known at the Sarasota County School Board meeting Tuesday where members reaffirmed their decision to require students to wear masks due to the pandemic.

According to Van, Proud Boys start out peacefully when they attend demonstrations. The Proud Boys mandate that none of their members take a first swing, he said.

They aren’t hesitant, however, to throw the second or third punches. “If you (a Proud Boy) start a fight, you will be punished harshly by the Proud Boys,” he said of their members.

Van takes exception when the Proud Boys are lumped together with white supremacists and other hate groups.

“Being called a racist is the worst thing anybody can say about someone,” said Van, whose wife is a Native American.

As far as the Proud Boys’ critics, he said, “They need a boogeyman.”

“Their disavowals of bigotry are belied by their actions: rank-and-file Proud Boys and leaders regularly spout white nationalist memes and maintain affiliations with known extremists,” the center posted on its website, www.splcenter.org.

“They are known for anti-Muslim and misogynistic rhetoric,” the center stated. “Proud Boys have appeared alongside other hate groups at extremist gatherings like the ‘Unite the Right’ rally in Charlottesville.”

McInnes has since filed an anti-defamation suit against the poverty center.

Like the poverty center, the Anti-Defamation League is no fan of the Proud Boys.

“After several years of forging alliances with members of the Republican political establishment, the Proud Boys have carved out a niche for themselves as both a right-wing fight club and a volunteer security force for the GOP,” the ADL stated on its website, www.adl.org.

“Despite their associations with mainstream politicians, Proud Boys’ actions and statements repeatedly land them in the company of white supremacists and right-wing extremists,” the ADL concluded.

Trump called for them to “stand back and stand by,” rather than denouncing the organization, white supremacists or any other extremest groups at the debate.

At his own expense, Bobby Van paid for T-shirts that list the tenets Proud Boys believe:

• Reinstalling a spirit of patriotism.

My first reaction was repulsion that he lives among us. As I read the story I became mad at the newspaper for giving this racist terrorist group publicity. When I finished the story, I was glad the newspaper alerted us to this horrible collection of losers that live among us.

He's lying throughout the story. He has everything go gain by lying. I'm sure the Proud Boys are celebrating that they got this coverage. Their numbers will grow.