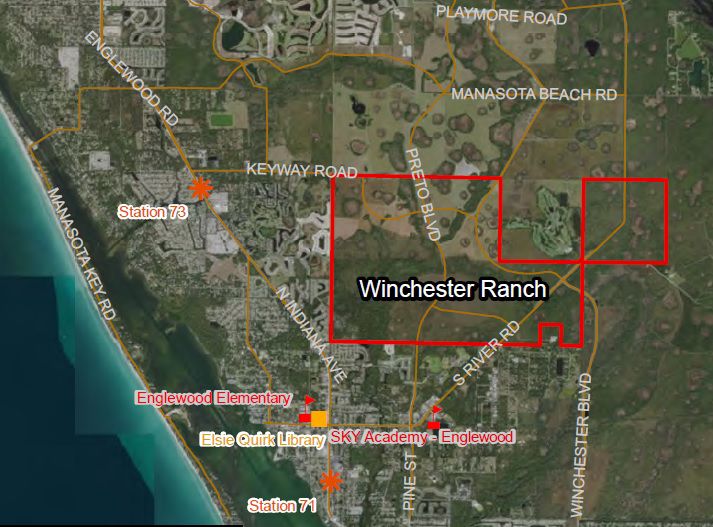 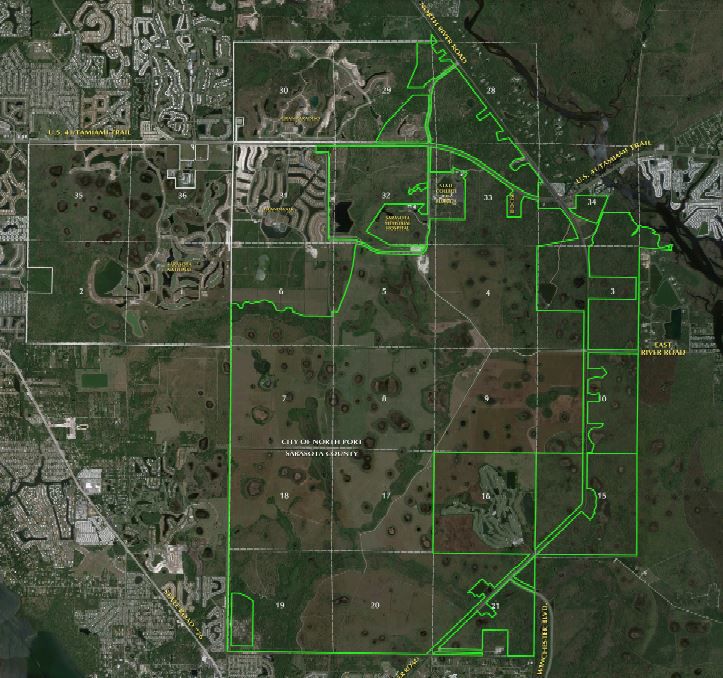 PHOTO PROVIDED Thomas Ranch, outlined in green, covers 15 square miles in the city of North Port and Englewood — from River Road at upper right, extending along U.S. 41 to the west and Winchester Boulevard to the south, and State Road 776 at lower left. When the mixed-use development is built out in the next 20 to 40 years, developers say up to 25,000 new homes will lie within its confines.

PHOTO PROVIDED Thomas Ranch, outlined in green, covers 15 square miles in the city of North Port and Englewood — from River Road at upper right, extending along U.S. 41 to the west and Winchester Boulevard to the south, and State Road 776 at lower left. When the mixed-use development is built out in the next 20 to 40 years, developers say up to 25,000 new homes will lie within its confines.

SARASOTA — Despite opposition from nearby Englewood residents, a development plan that would bring 9,000 new homes to the outskirts of the town along River Road received unanimous approval from the Sarasota County Planning Commission Thursday evening.

The fate of the plan now moves to the Sarasota County Commission for its consideration. That public hearing is anticipated to occur in April.

What the planning commissioners approved Thursday evening and county commissioners will next consider is a critical area plan for 3,660 acres adjacent to River Road for the proposed development called Winchester Ranch.

While many of the Wellen Park developments are inside the city limits of North Port, this parcel is not.

Calling it an “island surrounded by urban intensity,” Marty Black, the general manager of West Villages (renamed Wellen Park), took heed of the elephant in the room — River Road — early in his presentation.

“There will be two parallel road networks that will run through the development parallel to River Road,” Black said, adding that it would “internalize traffic.”

Those two roads will be Preto Boulevard and West Villages Parkway, which will meet Winchester Boulevard as that road is extended westward.

Addressing concerns about wildlife, Black added that the plan anticipates 780 acres of preserve areas along with wildlife corridors over the major roadways.

With the pandemic limiting attendance at the meeting in downtown Sarasota, only one person rose to speak.

Kevin Downy of Boca Royale wanted to know if the Englewood Water District would be able support the needs for a development of this size, to which Black responded that agreements with the district were already in place.

Other public comments submitted by the public prior to the meeting using the county’s web page for that purpose were not available for viewing.

But the planners and planning commission members were quick to address perceptions that appeared to be central to those communications.

“There will not be 9,000 homes starting tomorrow going in,” Planning Commissioner Laura Benson flatly said.

Steve Kirk, the county planner shepherding the proposal through the county process, added that it has a 50-year build-out in place, and that for each of the planned communities within the proposed development, the county’s rezoning process will be in place, meaning a number of neighborhood meetings and public hearings will have to occur to gain approval.

Black reinforced those points saying that people should not expect to see anything for at least five years.

“You’re not going to have one thousand homes all at once,” Black added.

Viewers who tuned into the meeting at 5 p.m. Thursday evening to watch on the County’s YouTube site or Meetings on Demand might have been surprised to see a video running about vaccinations at Sarasota Square Mall.

An email by an unidentified county staff explained that technical issues had knocked both venues offline.

While staff scrambled to enable both venues for online viewers, the commission took a break with the meeting resuming shortly after 5:30 p.m. Only a portion of Kirk’s staff presentation was missed.

Prior to the presentation to the planning commission, a staff review of the plan had found it consistent with the county’s comprehensive plan and recommended approval.