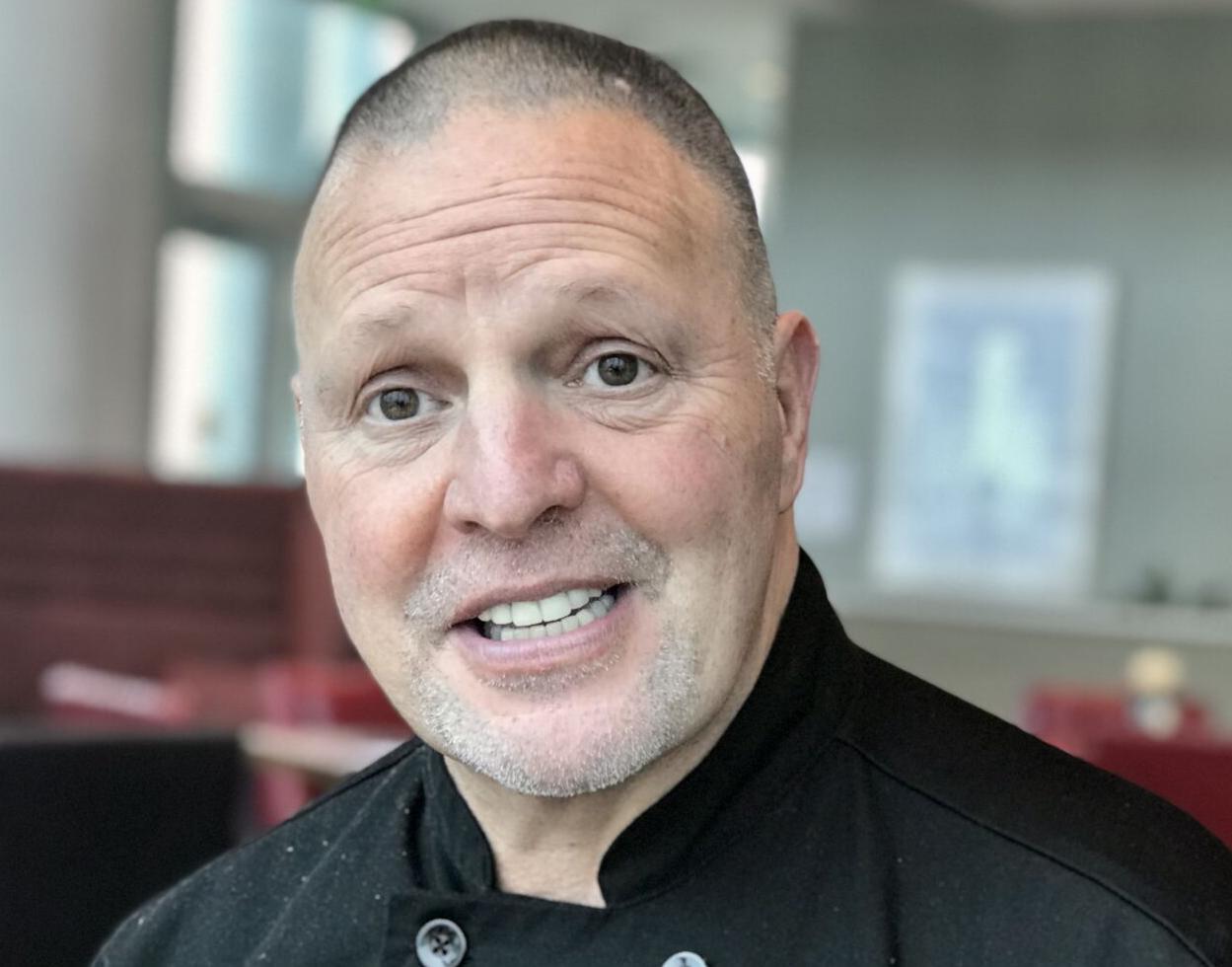 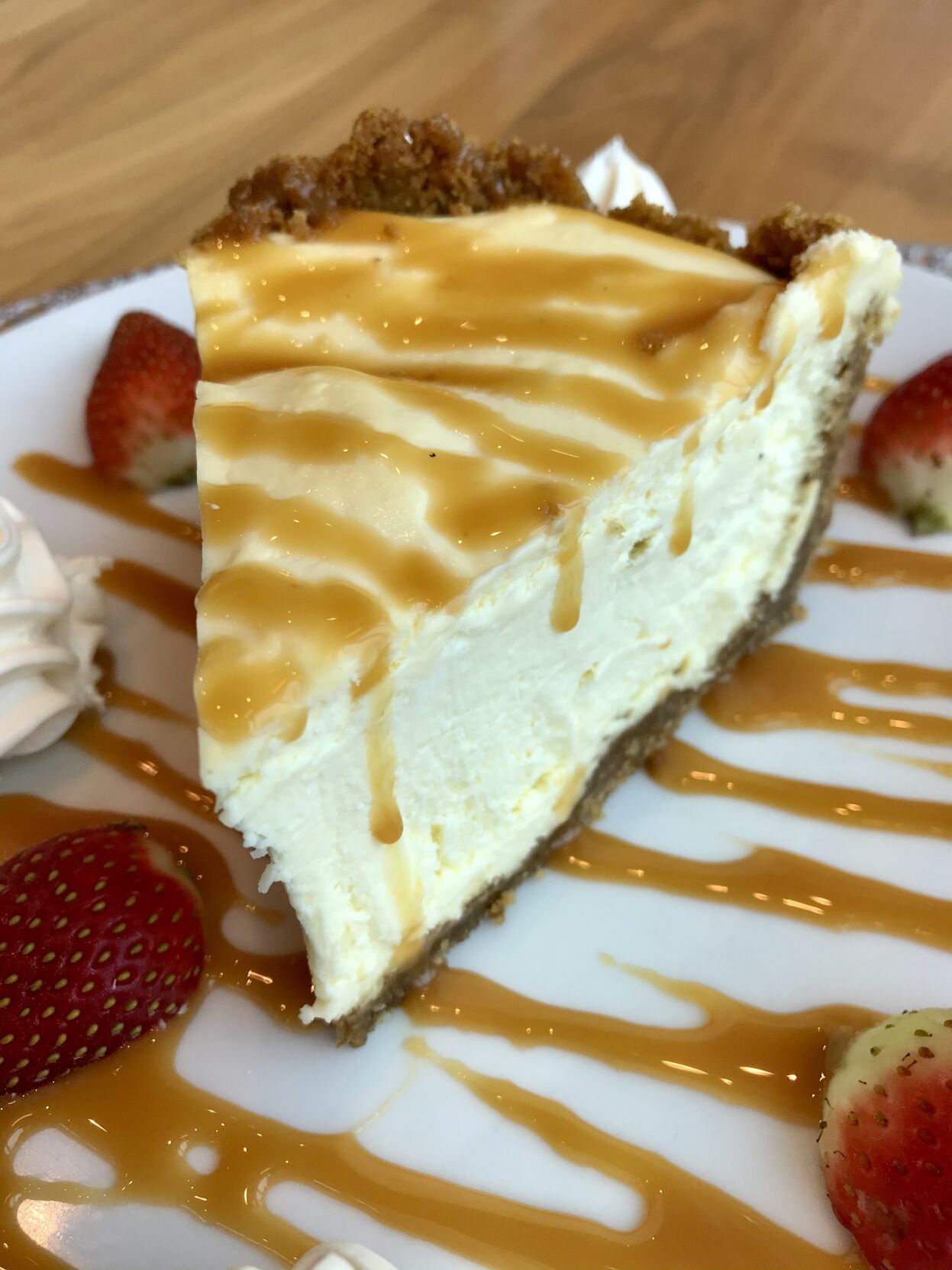 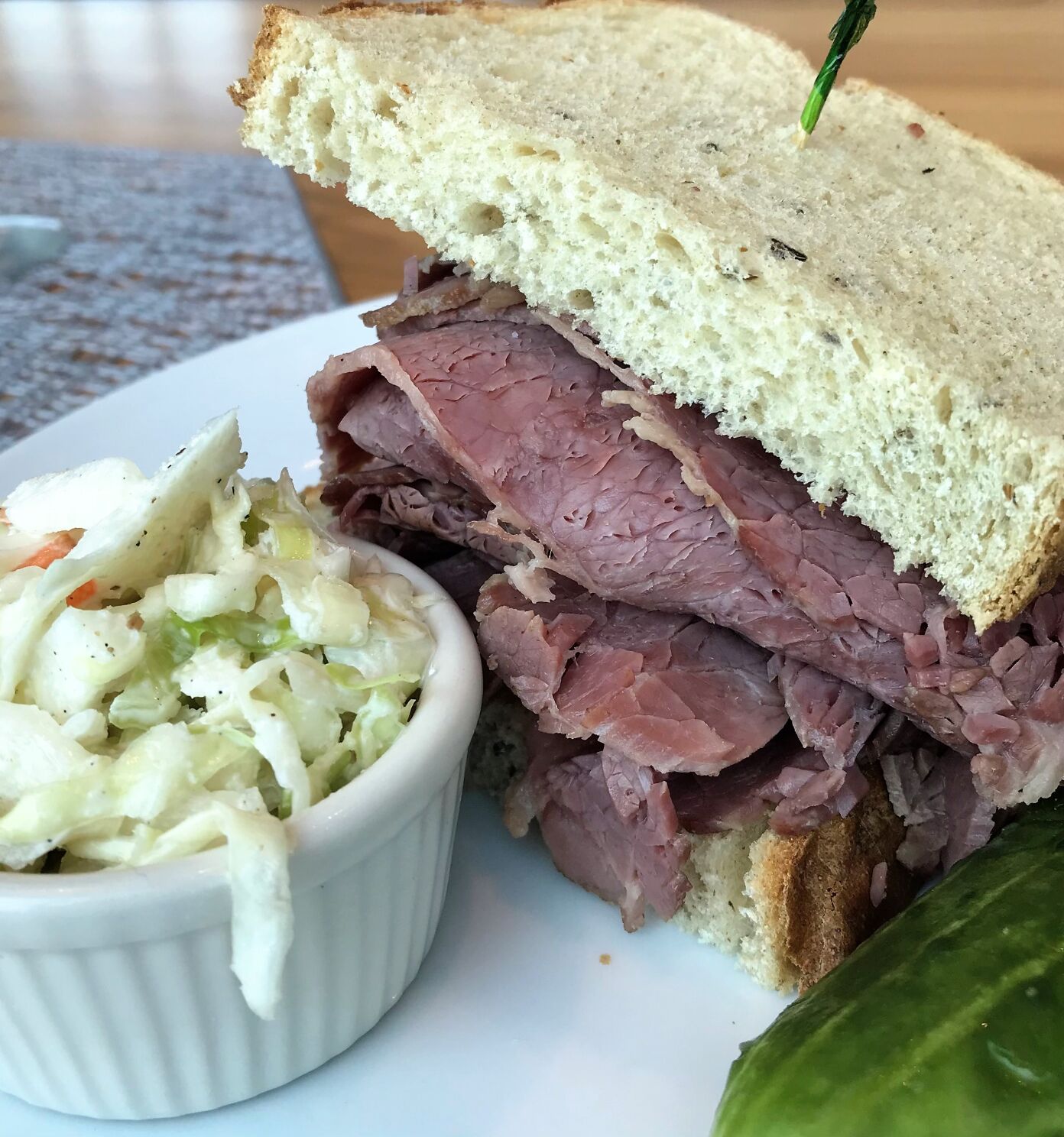 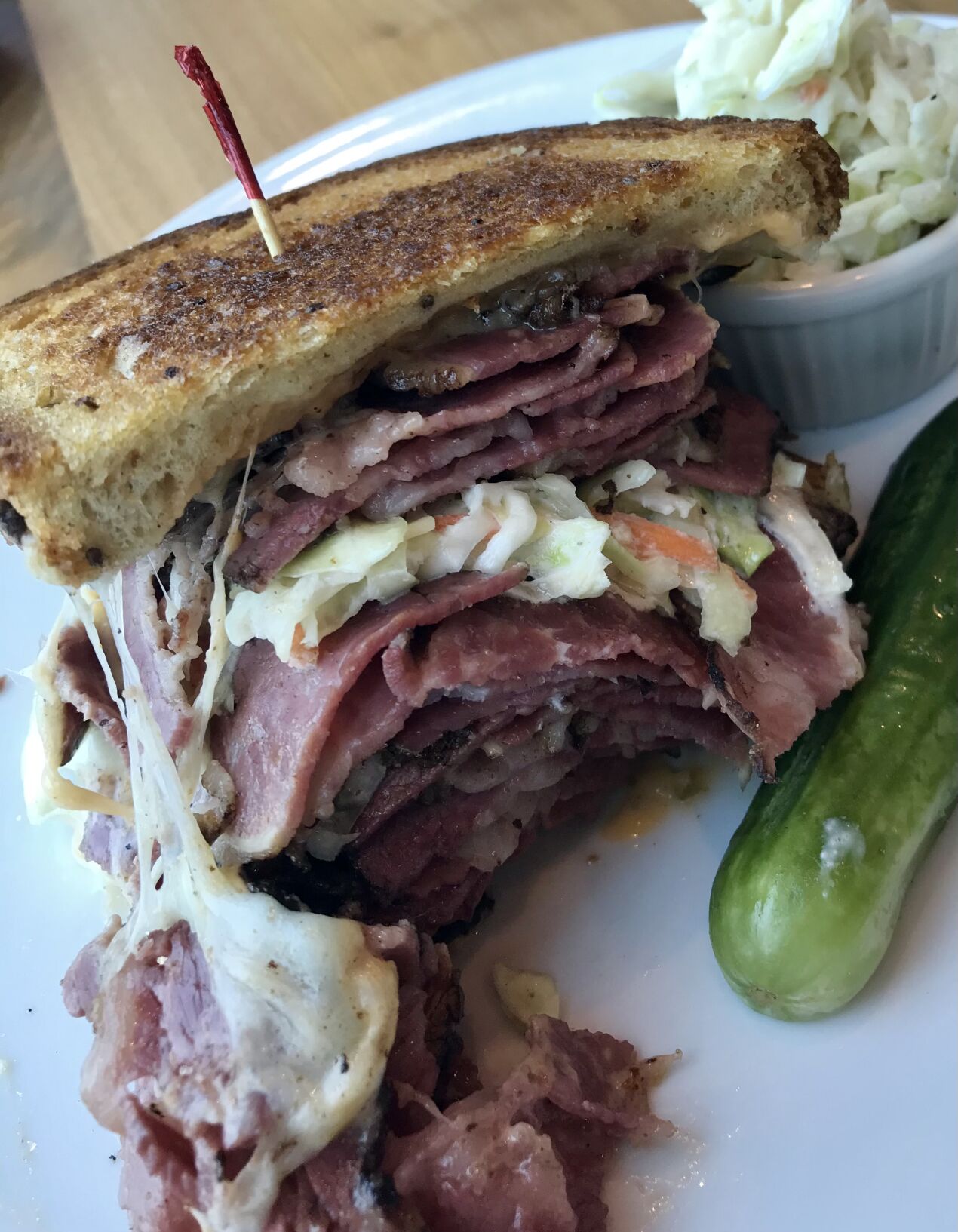 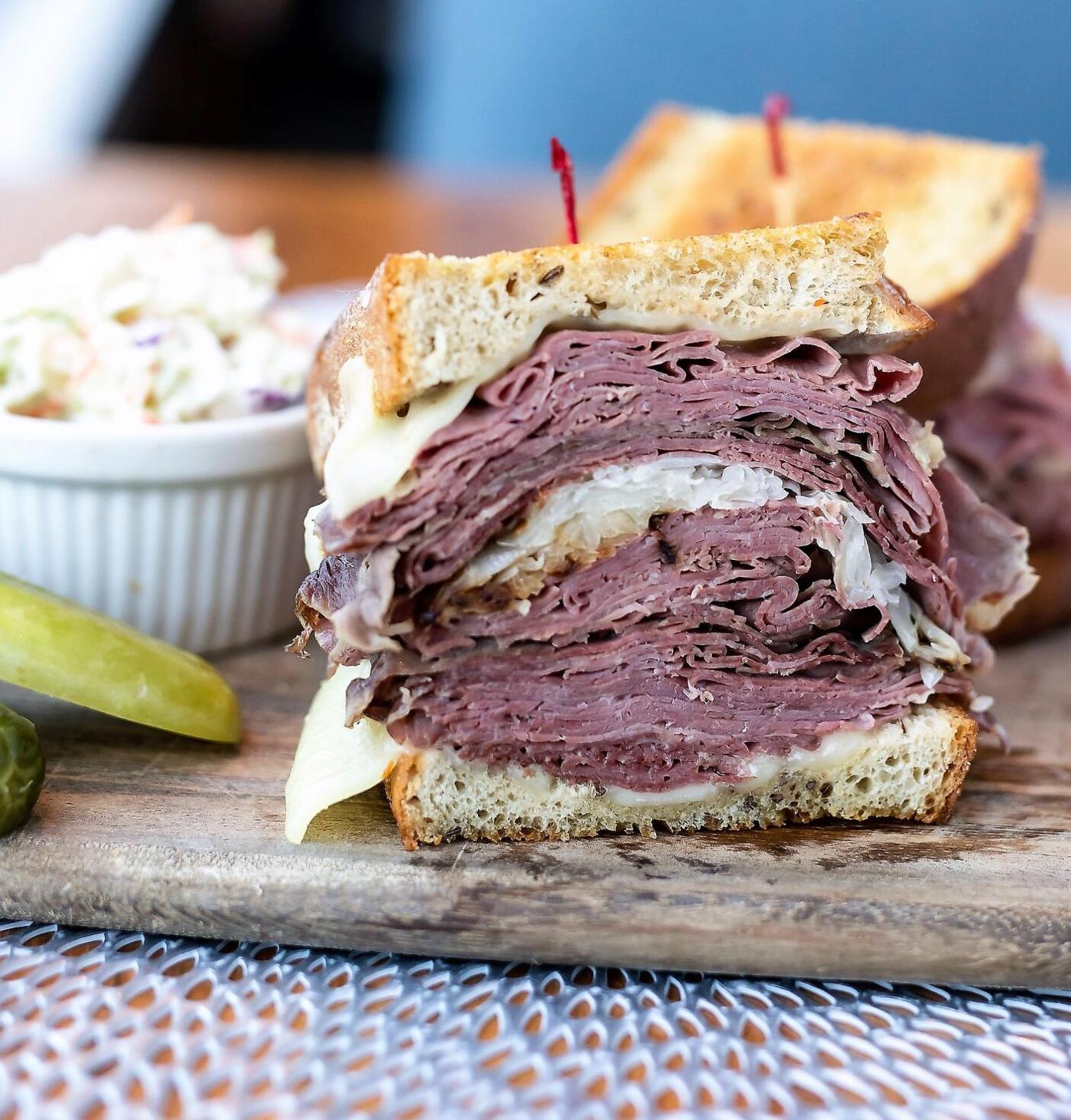 Chef Sol’s Reuben and Rachel are best-sellers. All deli sandwiches, like this Reuben, are served with cole slaw and a half-sour. 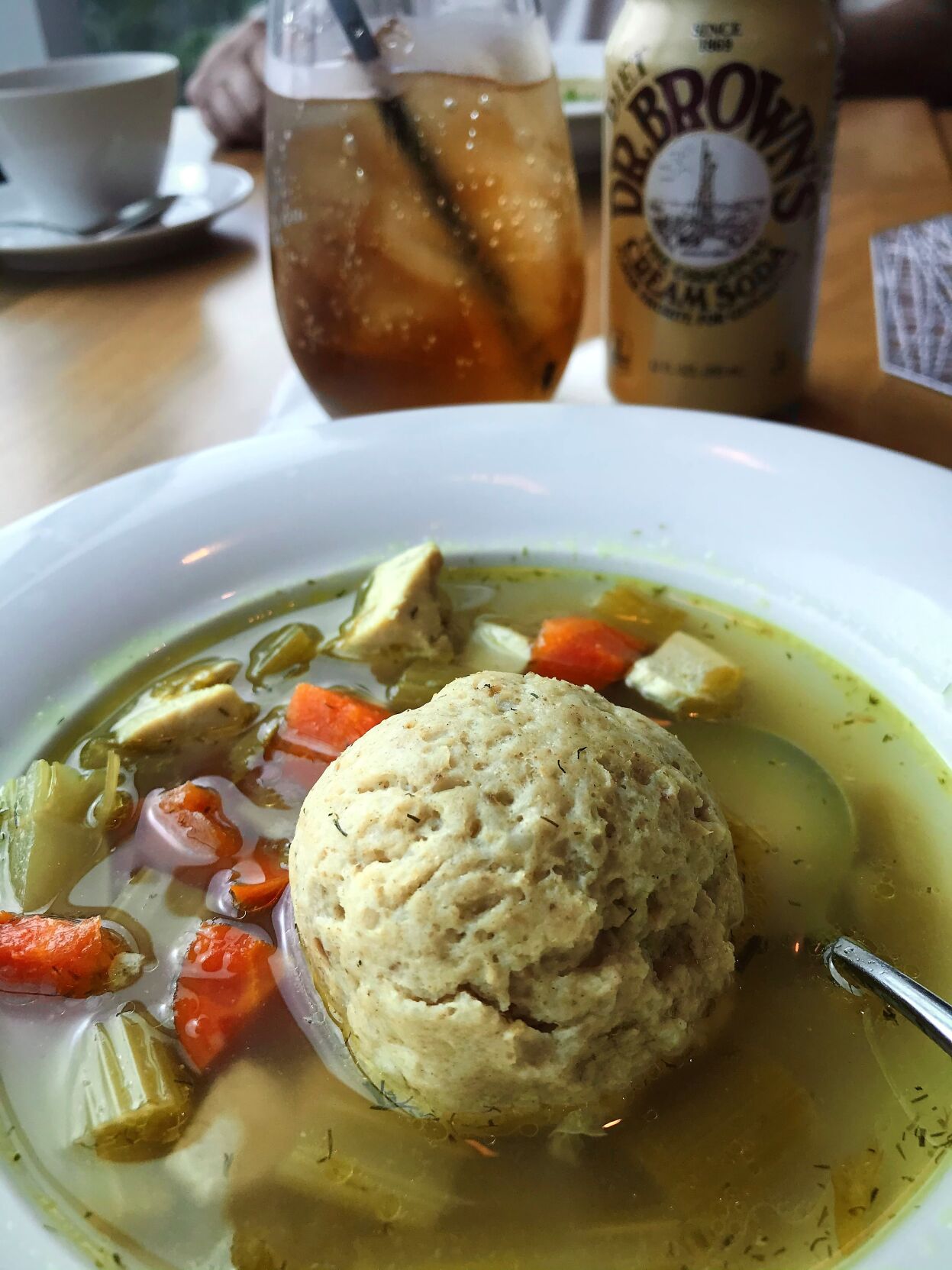 Chef Sol’s Reuben and Rachel are best-sellers. All deli sandwiches, like this Reuben, are served with cole slaw and a half-sour.

Florida might be freshly flooded with NYC chefs. But one of them has been here a while, and he’s the real deal.

A larger-than-life Whac-A-Chef, the dude’s hard to pin down because he keeps moving around.

But hundreds of loyal fans eventually manage to hit him wherever he pops up — whether in his own place or a symbiotic partnership.

They can taste home in his deli food, and they can’t get it anywhere else.

One Facebook reviewer unabashedly declared himself “a Sol man” after discovering Chef Sol’s Jewish soul food. Another exclaimed, “We’re NY’ers — this is the real stuff!”

Shenker said, “It’s amazing how many people from your area make the trek here. And they leave with bagfuls of food, too — corned beef, pastrami, all the good New York soul food.”

Customers are jonesing for New York deli — matzo ball soup made with real chicken-bone broth and a mammoth matzo ball, pastrami, brisket, blintzes, latkes, and towering sandwiches piled sky-high on rye, with plenty of half-sours and cole slaw, all washed down with Dr. Brown’s soda, that kosher drink of choice for over a century of deli goers.

And never forget the Chef Sol mantra that whispers: “Leave room for the cheesecake.”

His isn’t too cloyingly sweet but is infused with the flavor of toffee-crunch graham cracker crust. At some locations, he served it with a steak knife standing straight up in its creamy middle. At one point, he supplied 20 different restaurants with this heavenly stuff.

WHO IS SOLOMON SHENKER?

The minute he graduated from the Culinary Institute of America, he started “doing the seasons,” exec cheffing all over the Northeast — from Vermont’s Sugarbush to Block Island, Martha’s Vineyard and South Yarmouth — and out west, where he was an executive banquet chef in Vail, Colorado.

He and wife Marta settled in Florida a decade ago.

She’s vegetarian, but her hubby doesn’t just corn his own beef. He also pickles his own half-sours and makes Bridges gourmet specials from veggie burger and seafood-stuffed oysters to meat lovers’ veal osso bucco and a filet mignon-lobster tower.

“I can do any cuisine you can think of,” he said. “But my passion is deli. I’m a New York Jew who’s worked in New York delis. I love the whole attitude, the hustle that comes with them, y’know what I mean?”

Around 2011, way before he thought of opening Sarasota’s first real Jewish deli, Sol was hired at Hotel Indigo.

Sol recalled, “One day, this lady came into the Longboat Key kitchen and said, ‘Who made this food?’ I said, ‘Hi, I’m Sol Shenker!’”

Next thing he knew, people started passing his name around to do high-end private caterings.

For one Forks & Corks event, he made cheesecake bites and whipped up wild mushroom bisque out of 18 different fungi. Surrounded by all the major restaurants in town, with fancy-schmancy displays, he set up quietly and soon had the longest line of all. Sarasota Magazine called him the sleeper of the event.

By 2013, ABC7 food critic Chef Judi Gallagher had discovered him.

In 2015, he and his brother-in-law opened their own place — Sol Meyer on Main Street — with lines down the street and a two-hour wait. A year later, after a family kerfuffle, he opened the legendary Sol’s NYC Delicatessen, 3,000 square feet in a former Applebee’s.

In 2017, a 20-foot deli case inside Il Panificio Gulf Gate. One side of the store was New York Italian, the other was Jewish deli — a New York gold mine under one roof.

In 2018, Sol partnered briefly with the now-defunct Starlite Room before returning to the Hotel Indigo’s H2O Bistro.

Soon the Indigo had competition — the Westin, the Art Ovation, Embassy Suites, a dozen restaurants in the burgeoning Rosemary District — and Chef Sol couldn’t get the Indigo rocking and rolling like before.

There was only one thing for it — resurrect Sol’s NYC Delicatessen, along with the regular H2O menu. The owners agreed.

For a while, he worked at both Indigo and, starting a year ago, Bridges.

“Then COVID hit,” he said. “They shut down Indigo and sold the hotel, so I focused on Bridges through the first six months of the pandemic.”

“When you have to depend on investors, your attitude changes,” Sol admitted. “I finally went back to the hotel business. It’s hard making that transition after working for yourself for five years, but they let me do whatever I want here — as long as it’s cost-effective and I don’t kill anybody.”

“Well, I’m gonna be 57 years old. Maybe in the next five years, I’ll open another little spot selling cheesecake and deli food, and call it a day.”

As long as you let us know where it is, Chef.