A Jeep driver had rammed a home on the 4400 block of Lobelia Street late Thursday. Alcohol reportedly was a factor. 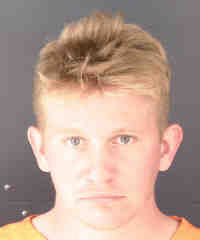 NORTH PORT — Police charged a Port Charlotte man with driving under the influence after his Jeep slammed into a North Port house.

Chase Edwin Dolphin, 28, was spotted by witnesses speeding in a 2017 Jeep four-door in the minutes before losing control and smashing the vehicle Thursday into a corner of the Lobelia Street home, according to reports released Friday.

Damage to the house was around the garage; crushed cinder blocking and a buckled door was still evident Friday. The Jeep bumper to the windshield was destroyed, its airbags deployed. No one was hurt at the home.

Dolphin complained of wrist injuries; his seatbelt wasn’t used properly, police reported. He was treated at Sarasota Memorial Hospital, detained on driving under the influence and damaging property charges, and ultimately released on a $500 bond from the Sarasota County Jail.

Sometime after 6 p.m., Dolphin “came off (US) 41 and was flying up and down Sumter with his door open. He even ran the light at Price and almost T-boned someone turning left that had the right of way,” wrote Deborah Smith on the North Port Police Department Facebook page.

Another poster, Tony Andre, wrote: “I was in front of dunkies (Dunkin Donuts) and he came flying up in the other lane and passed me like I wasn’t moving. Then almost hit a curb and went up on three wheels at about 70. I’m glad he didn’t kill anyone. Cuz that’s what I thought was gonna happen.”

An unnamed witness in police documents reported that Dolphin somehow ended up at Lobelia and Madagascar Avenue, blew the Madagascar stop sign and barreled at the home. That’s about two miles from where he was spotted on Sumter Boulevard. There was no attempting to stop, according to police accident technicians checking for skids or other clues of a driver mashing the brakes.

What North Port police got from Thursday’s incident, however, was a blood-alcohol level on Dolphin that exceeded the legal 0.08% limit. Responding officers noted that he had “bloodshot watery eyes, slurred speech and a strong odor of an unknown alcoholic beverage emitting from his breath.” Dolphin, who lives on the 13500 block of Overton Terrace in Port Charlotte, was given Miranda warnings, agreed to sobriety tests.

Dolphin in the police report downplayed the severity of the crash, then complained that the homeowner yelled at him as he bailed from the Jeep “without being glad that he was OK.”