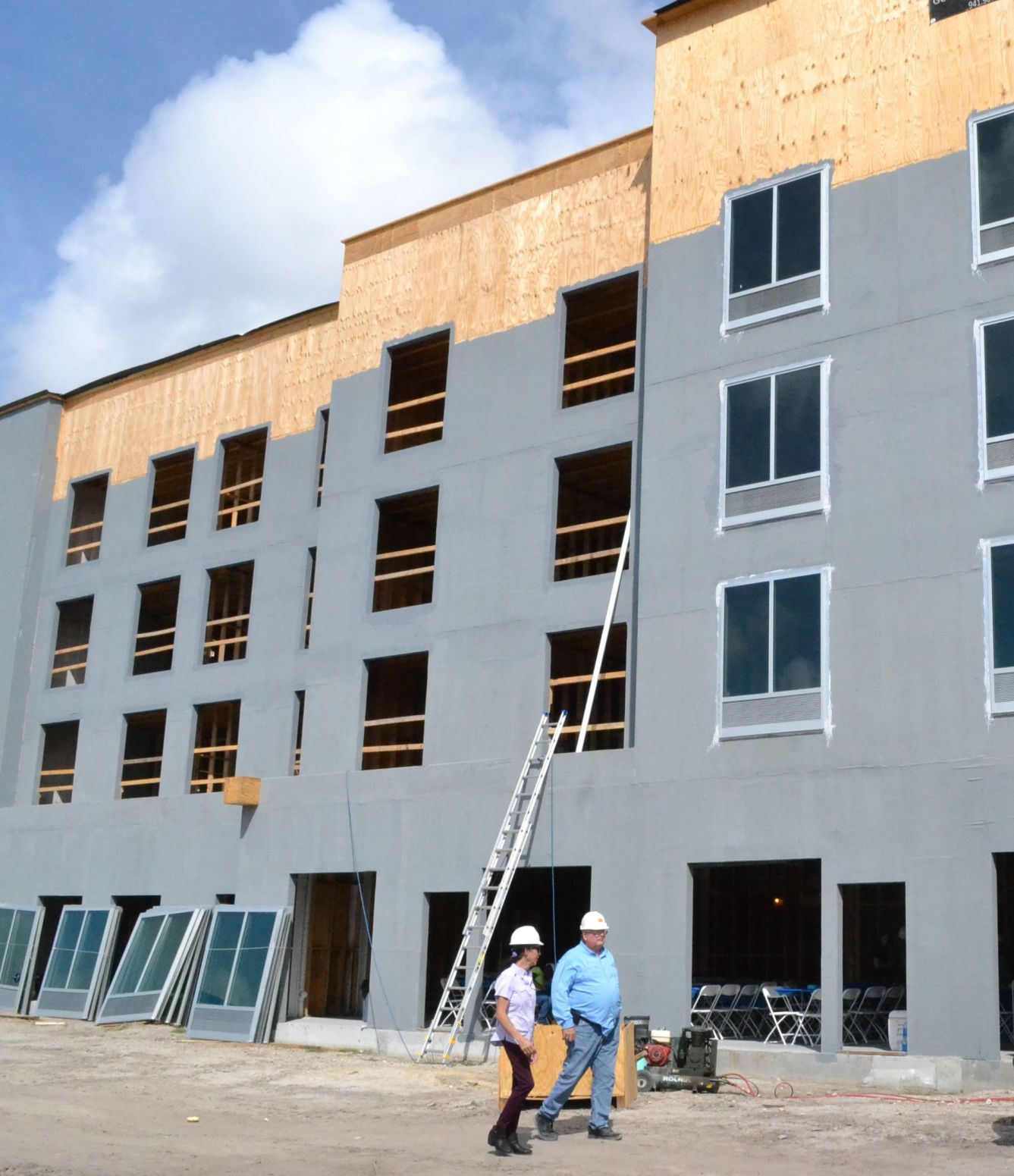 A Michigan-based firm will open North Port’s Hampton Inn & Suites, a Hilton imprint, in September. Guests joined in a “topping out” event Wednesday, signifying the $17 million project’s tallest feature had been completed. 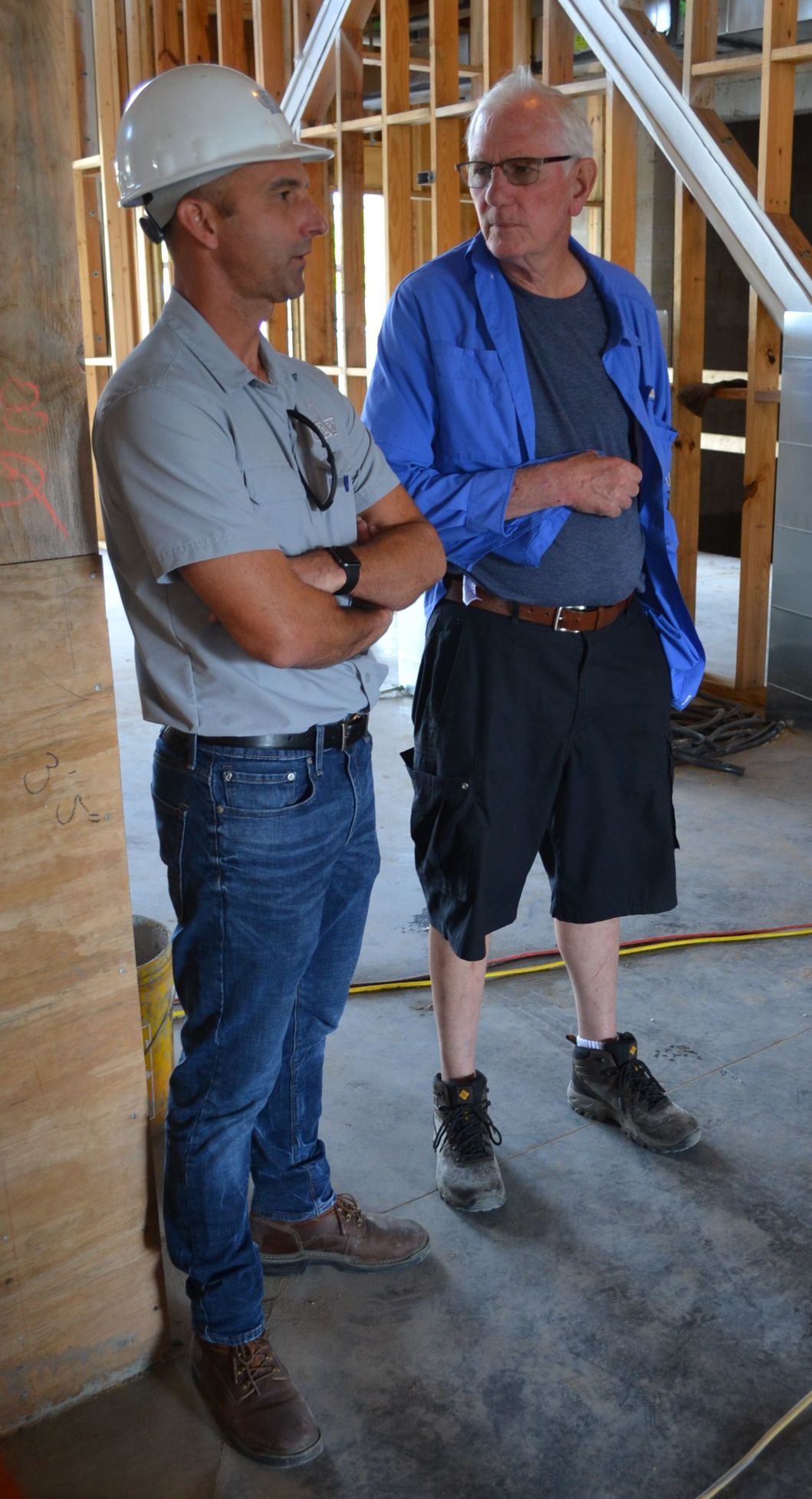 Bill Martin, right, is building the Hampton Inn & Suites franchise in North Port. He shared details of the 100-room project with Trey Arias, a project manager with Stellar Development, the Sarasota-based general contractor.

A Michigan-based firm will open North Port’s Hampton Inn & Suites, a Hilton imprint, in September. Guests joined in a “topping out” event Wednesday, signifying the $17 million project’s tallest feature had been completed.

Bill Martin, right, is building the Hampton Inn & Suites franchise in North Port. He shared details of the 100-room project with Trey Arias, a project manager with Stellar Development, the Sarasota-based general contractor.

NORTH PORT — North Port’s Tree City USA designation could also serve as a metaphor for its sprouting of people and buildings.

As the city’s population zooms to 80,000 and with record building permits in 2019, more new housing has been approved by commissioners only a few weeks into 2020.

A central growth feature is the Atlanta Braves’ Major League Baseball stadium complex, which has fans sprinting to North Port. CoolToday Park is in the West Villages, a boomtown that could someday have 50,000 residents. The complementary West Villages Marketplace opened to serve that community. A Publix is the centerpiece and other retail has opened alongside it.

But where do these work crews, fans, visitors and other North Port guests stay?

The question of limited guestrooms was in part answered Wednesday at the Hampton Inn & Suites Hotel along Tamiami Trail near Sumter Boulevard.

Construction started in May 2019 and customers should be wheeling their luggage into the Tuscola Commons location this September. Room rates will run $120-$250 per night.

The project will likely spark hospitality development over the next decade along North Port business corridors, officials speculated Wednesday, which means wagonloads of arriving retail and food outlets.

Ownership, contractors, city officials and work crews celebrated the Hampton’s next phase with a “topping out” ceremony at the four-story, 100-room structure Wednesday. That means the highest elevation of the $17 million project had been completed. Builders historically stage a thank-you to staff and work crews for completing the building’s shell and for doing so safely. A steel beam once signified that topping out.

On Wednesday, the topping out meant barbeque lunch and cold soda with Sarasota’s Stellar Development, the general contractor, and executives with Lodgco Hospitality, the Michigan firm that owns the Hampton Inn & Suites franchise in North Port. Workers piled in for the catered meal. The company’s portfolio will round out at 20 inns when North Port’s opens.

The once sleepy city appeared on the company’s radar … very suddenly, Lodgco CEO Ann Kelly said. The Braves’ CoolToday Park was the catalyst, she added.

“We were shocked there’s not a hotel here,” Kelly said of visits to the city. “And North Port rolled out the red carpet. We’re very excited.”

Visiting the Hampton site Wednesday was Bill Martin, Lodgco’s co-owner. His company is in Mt. Pleasant, Michigan. North Port’s Hampton will be Lodgco’s fourth hotel in the Sunshine State, he said. Before the topping out, he poked around his investment. A taller man in walking boots, he was reaching to test entryway clearances, talked shop, shook a lot of hands, then enjoyed a plate of barbeque.

“It appeared the community needed” guestrooms in the city, said Martin, a former auto engineer in hospitality with his family.