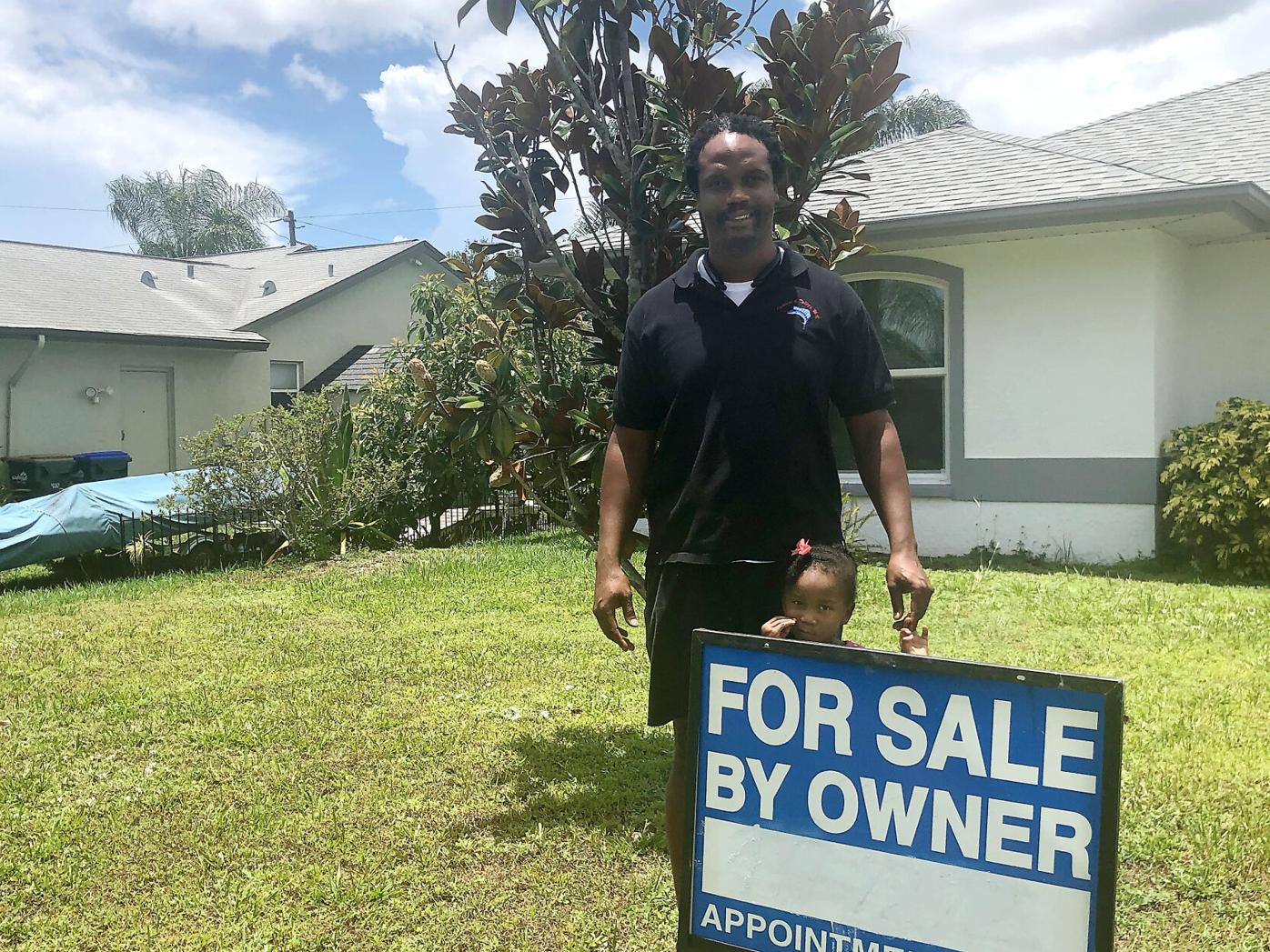 Keiron Jackman stands with his daughter Kehren next to a For Sale sign in the front yard of his family’s home in North Port. A dispute with his neighbors Richard Schwarz and Barbara Cebrick-Schwarz concerning a surveillance camera has led him and wife Bridget to put the house up for sale. The camera in question can be seen in the peak of the neighbor’s roof. 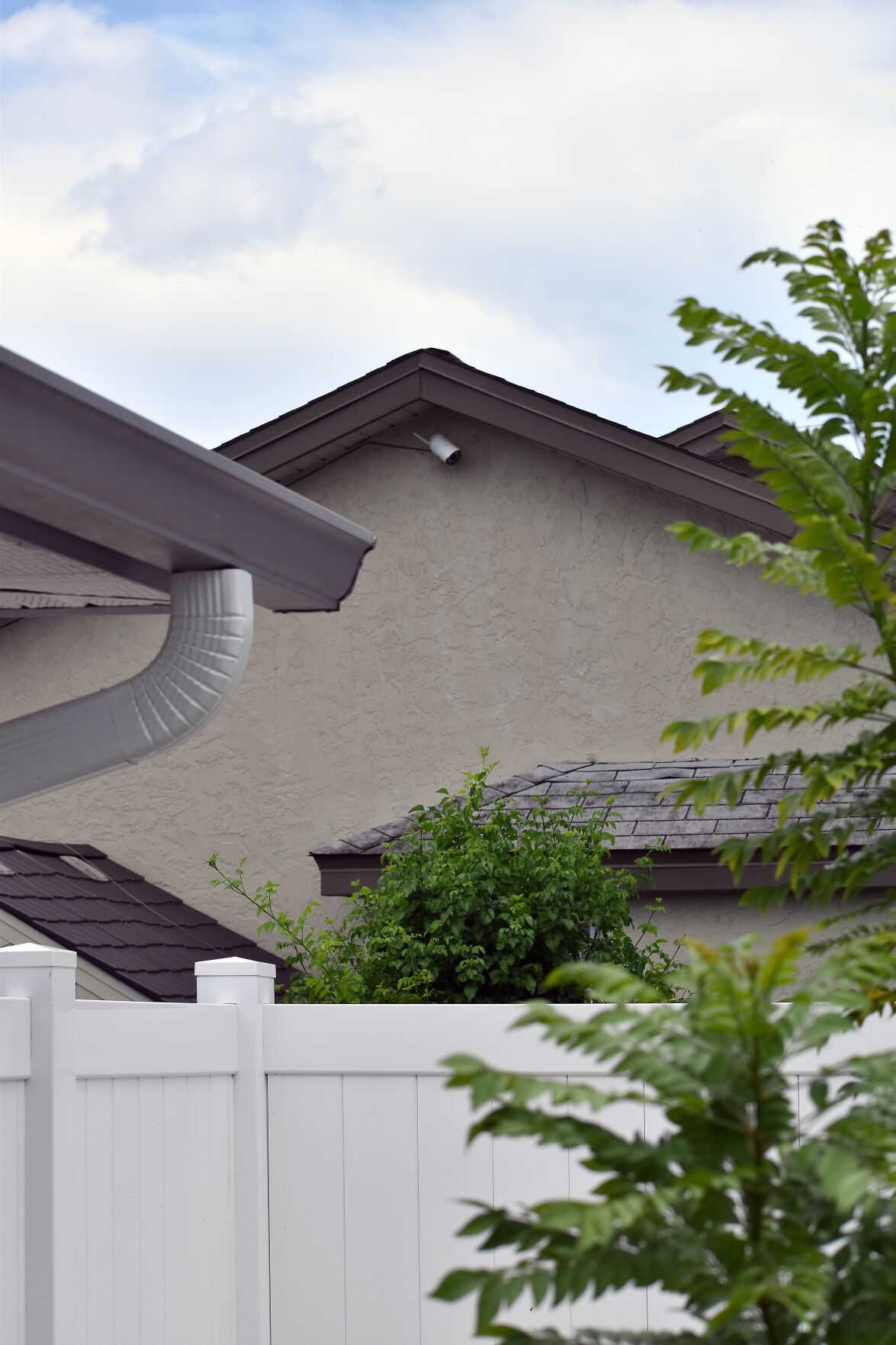 Keiron Jackman stands with his daughter Kehren next to a For Sale sign in the front yard of his family’s home in North Port. A dispute with his neighbors Richard Schwarz and Barbara Cebrick-Schwarz concerning a surveillance camera has led him and wife Bridget to put the house up for sale. The camera in question can be seen in the peak of the neighbor’s roof.

Editor’s note: This is part one of a two-part story.

It’s not a Hatfield-McCoys sort of feud, but the dispute between the Schwarz and Jackman families in North Port escalated from a kerfuffle over a property line to a debate concerning one of the most basic tenets of American life:

One might think the U.S. Constitution and several hundred years of legal precedent draws a line on privacy as clear as the one that divides the Schwarz-Jackman properties. Based on a judge’s ruling in a case the Jackmans brought against the Schwarzes, drawing such lines often includes a little coloring outside the box.

“I can’t use my property how I’d like to,” Keiron Jackman said this week, “because of what’s going on.”

ANATOMY OF A FEUD

North Port residents Richard Schwarz and Catherine Cebrick-Schwarz moved into their home on Logsdon Road in 2010. Seven years later, Keiron and Bridget Jackman moved into the house next door and started a family.

Early on, the Jackmans were dismayed by the behavior of the Schwarzes’ four dogs — two bassett hounds and two Labrador mixes. Two years ago, Bridget Jackman gave birth to daughter Kehren and as she grew, the Jackmans increasingly became concerned the dogs were scaring the child.

It was then that Keiron Jackman discovered his fence was 2 feet shy of the true property line between the neighbors, leading him to ask the Schwarzes to put up a new fence at the proper line.

Cebrick-Schwarz is an avid green thumb who spends many of her days puttering around the yard, potting plants and planting others, and had many plants growing well into the 2 feet of property that belonged to the Jackmans.

Cebrick-Schwarz spoke on background but declined to speak on the record for this story, citing fear of future litigation. The Jackmans, both of whom are attorneys, went through legal channels to serve the Schwarzes a deadline for removing the vegetation, to which the Schwarzes agreed. On the day of the deadline, Cebrick-Schwarz, was finishing up the job when she became upset over constant presence and banter coming from Keiron Jackman.

She called the police, seeking relief. In an audio recording of the call, Cebrick-Schwarz’s exasperation was evident and seemed near tears.

“I can’t even cut my grass,” she told the operator. “My husband has to do it because I can’t go over there because I’m afraid of him.”

Later in the call, Cebrick-Schwarz said the fear stemmed from the fact both Jackmans are attorneys.

“He is a lawyer and he’s going to come after me for something or other,” Cebrick-Schwarz told the operator. “I’m scared to death.”

The North Port Police Department responded. Officers defused the situation enough so the remaining yard work could be completed.

But that was just the first battle of a larger war.

The Jackmans are a private family. The COVID-19 pandemic has increased their desire to isolate, since the now 2-year-old Kehren has a respiratory condition that makes her especially vulnerable to the coronavirus. Both attorneys work from home as much as possible and Keiron Jackman said he is the only one who goes to the grocery store and runs the majority of errands to further reduce the family’s exposure.

Richard Schwarz is in poor health, so Cebrick-Schwarz is the one who most often tends to yardwork and other strenuous activities, in order to keep her husband safe. For their overall peace of mind, the Schwarzes had two surveillance cameras monitoring the space between their house and the Jackman property, one spanning an area from the back of the Schwarzes’ yard to the street and another keeping an eye on a kayak.

The Jackmans installed a camera that monitored the space between their home and the Schwarzes’ side door. To increase their privacy and to give their daughter some space where she didn’t have to see the Schwarzes’ dogs, they installed a 6-foot-high privacy fence just off their home’s lanai.

Soon, daughter Kasher was born and part of the daily routine involved Bridget Jackman breastfeeding the newborn on the dark-screened lanai.

Meanwhile, according to court transcripts, the Schwarzes became increasingly concerned about what they believed to be constant badgering of Cebrick-Schwarz by Keiron Jackman. They also feared he was attempting to poison their dogs.

In response, Richard Schwarz installed another camera at the peak of the Schwarz home’s gable, more than 20 feet off the ground and seemingly pointed directly into the Jackmans’ lanai.

“So I decided to file a lawsuit for invasion of privacy,” Keiron Jackman said. “And the judge ruled that I’m not entitled to any kind of relief to have them remove the camera.”

The Jackmans filed for a temporary injunction in Sarasota County’s 12th Judicial Circuit Court and called for the removal of the camera. At the heart of the Jackmans’ complaint was the notion of “intrusion upon seclusion.”

According to a basic legal statement — known as the Restatement the Law, Second, Torts, 652 — there are four basic tentpoles to an intrusion upon seclusion claim:

First, the defendant, without authorization must have intentionally invaded the private affairs of the plaintiff.

Second, the invasion must be offensive to a reasonable person.

Third, the matter that the defendant intruded upon must involve a private matter.

Fourth, the intrusion must have caused mental anguish or suffering to the plaintiff.

The Jackmans offered photographic evidence that appeared to show the new camera pointed into the vicinity of the lanai. The camera also had a nightvision capability and at night, its orange light could be seen clearly from the Jackmans’ lanai.

In paragraph 10 of the complaint, the Jackmans made serious allegations against Richard Schwarz:

“On or about the week of April, Respondent Richard Schwarz, for his own amusement, entertainment, sexual arousal, gratification or profit, or for the purposes of degrading or abusing the Jackmans and with the approval and/or at the direction of Mrs. Schwarz installed the camera or imaging device along the common border at the top of their home just below the highest point of their home.”

The Jackmans argued the camera saw over the privacy fence and allowed the Schwarzes to see Bridget Jackman breastfeeding on the lanai and their daughter, Kehren, playing in the backyard and had forced the family to largely abandon both areas. The Jackmans converted their garage into a play area for Kehren, where she can jump on her trampoline.

The Schwarzes countered with exhibits of their own. Two video files showed images from the camera in question. In the images, the camera appeared to capture only a small portion of the Jackmans’ yard and nothing from the lanai. Cebrick-Schwarz said the camera was placed in that position to catch any incident involving Keiron Jackman entering their yard and harassing her.

The Schwarzes went on to state they barely knew how to operate the surveillance system, that the recordings went to a “box” in the garage and that they didn’t even know how to pull video from the system. The videos provided to the court were shot from Cebrick-Schwarz’s iPhone as she recorded the images from the box’s monitor.

The Schwarzes testified the system records over itself every month, so no images are retained. Schwarz later clarified the rollover is closer to less than a week’s time.

In his closing argument, Schwarz attorney Steele Williams argued a case for an invasion of privacy only applied if the Schwarzes took the video and gave it to a third party for publication.

“The allegation and proof of publication of a third person is required. Don’t have that here, whatsoever,” Williams said according to the court transcript. “I asked every witness presented by either side: Where is the publication of what we’re talking about here? No one. Zilch.”

Williams also argued any possible invasion by the Schwarzes was unintentional, any legal action was not called for.

“Intrusion upon seclusion must always be intentional, to be tortious and cannot arise from a mere lack of due care,” Williams said. “We don’t have any of that here.”

Following closing arguments, Circuit Judge Stephen Walker called a short recess to consider his ruling. When he returned, he delivered a lengthy opinion that both closed the case and possibly opened a can of worms.

Read part two in Monday’s edition of The Sun.