You are the owner of this article.
Edit Article Add New Article
I want to
Publications
Subscribe
Homes for Sale
Cars for Sale
Jobs
Classifieds
E-Paper
News Archives
App
Public Notices
Your Newspapers
Contact Us
Calendar
1 of 4 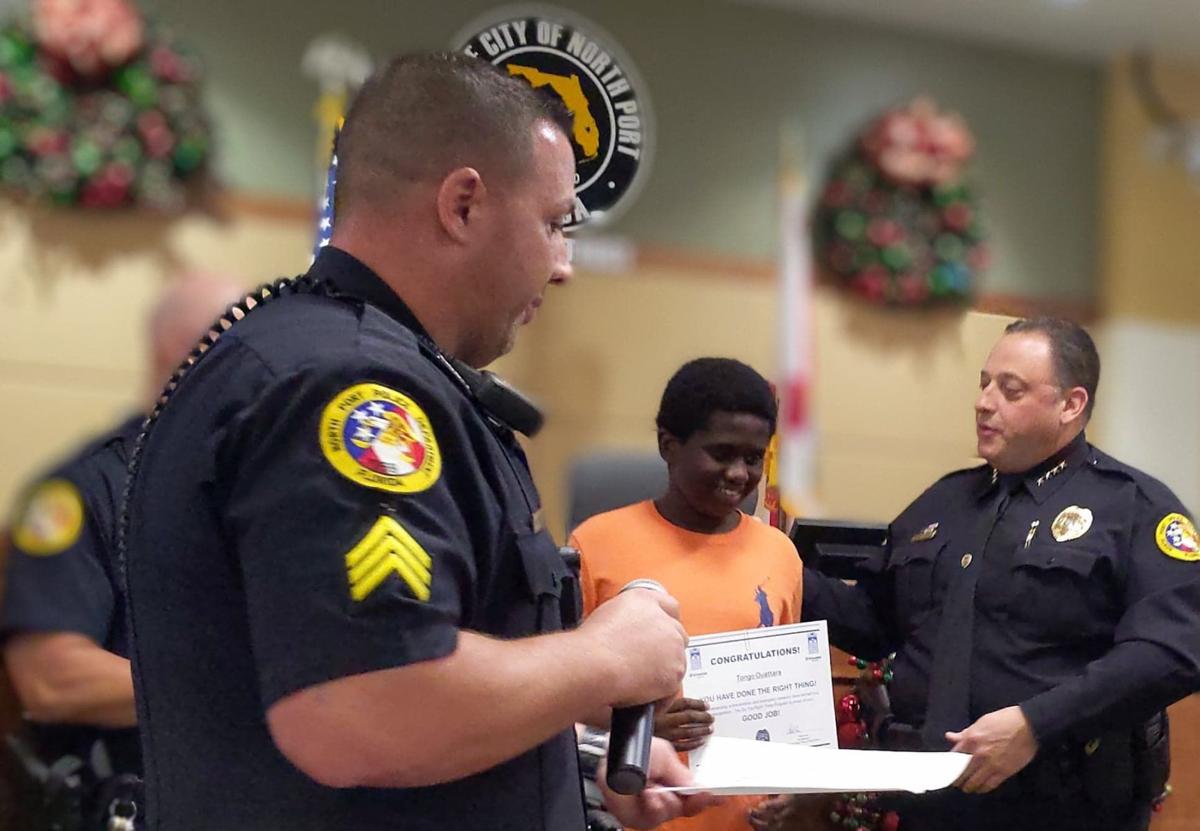 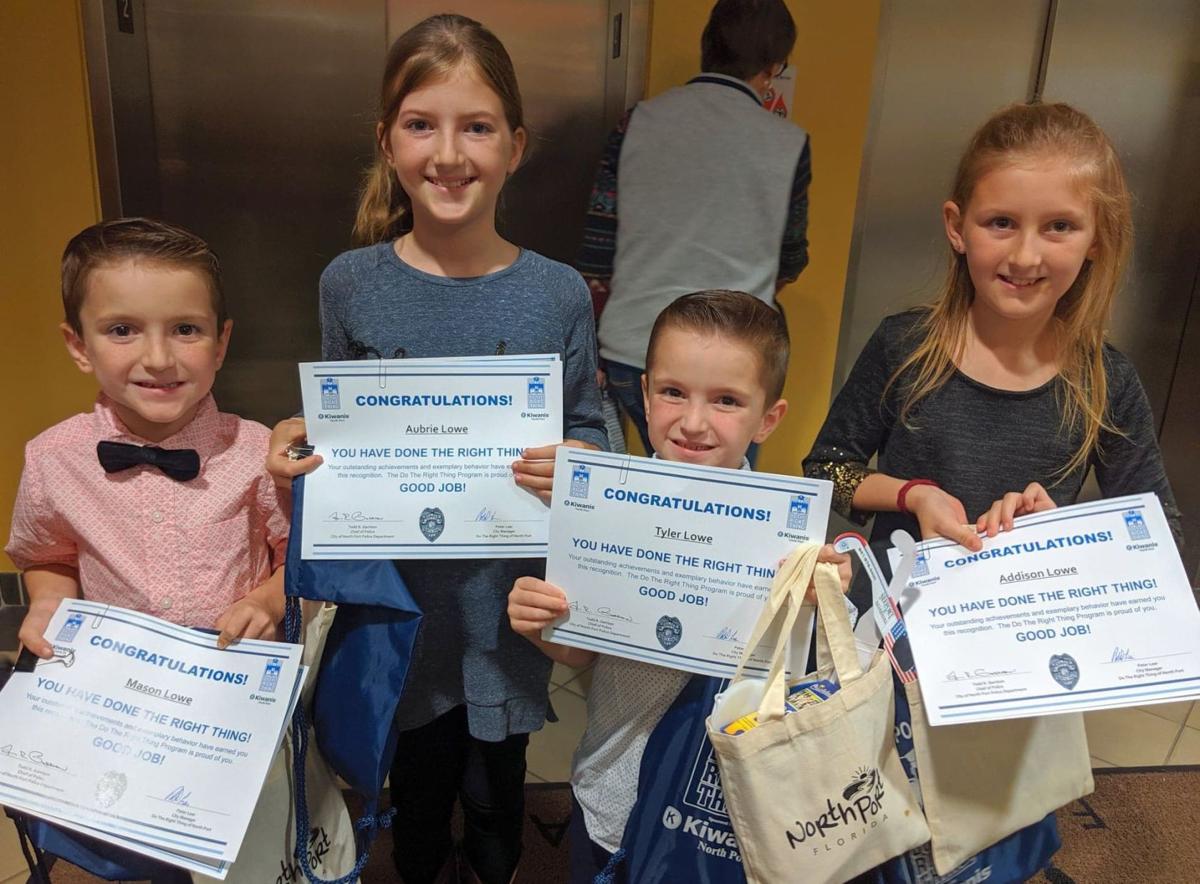 Mason Lowe, 6, Aubrie Lowe, 10, Tyler Lowe, 6, and Addison Lowe, 9, were honored as one of the first winners of the Do the Right Thing award recently at city hall in North Port. 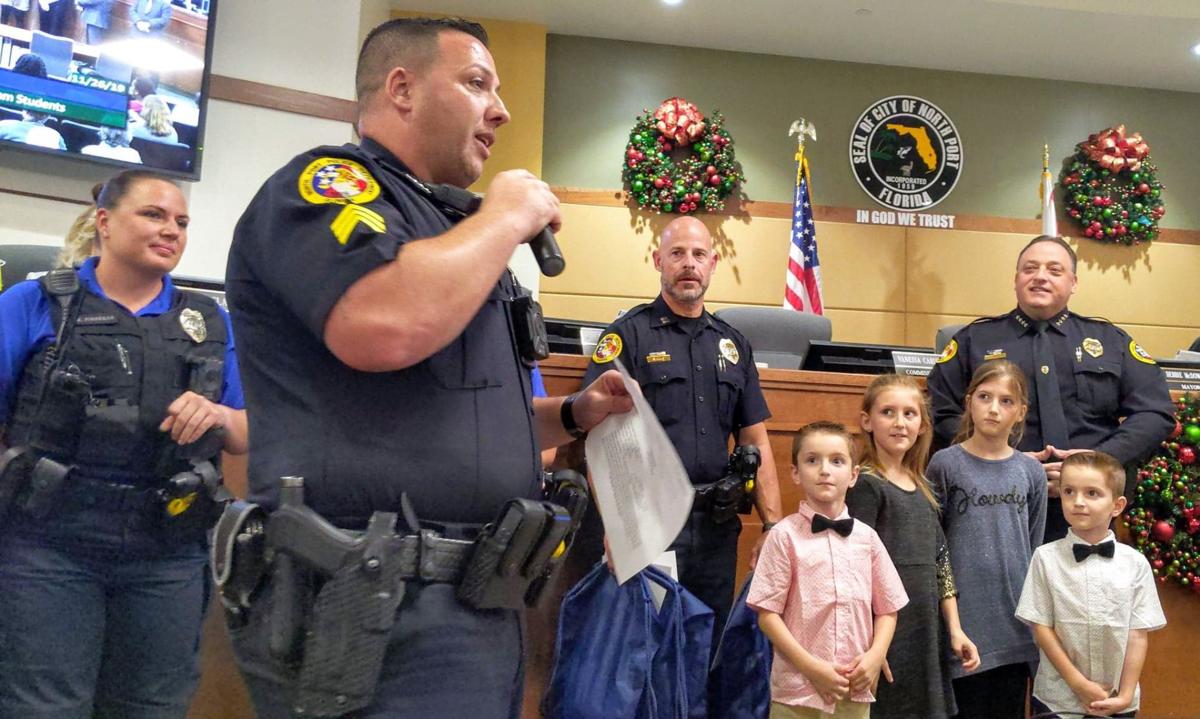 North Port Police Sgt. Scott Miranda explains that the Lowe children sacrificed their birthday parties by having community clean-ups on their special day. They were nominated for the police department’s new Do the Right Thing award. 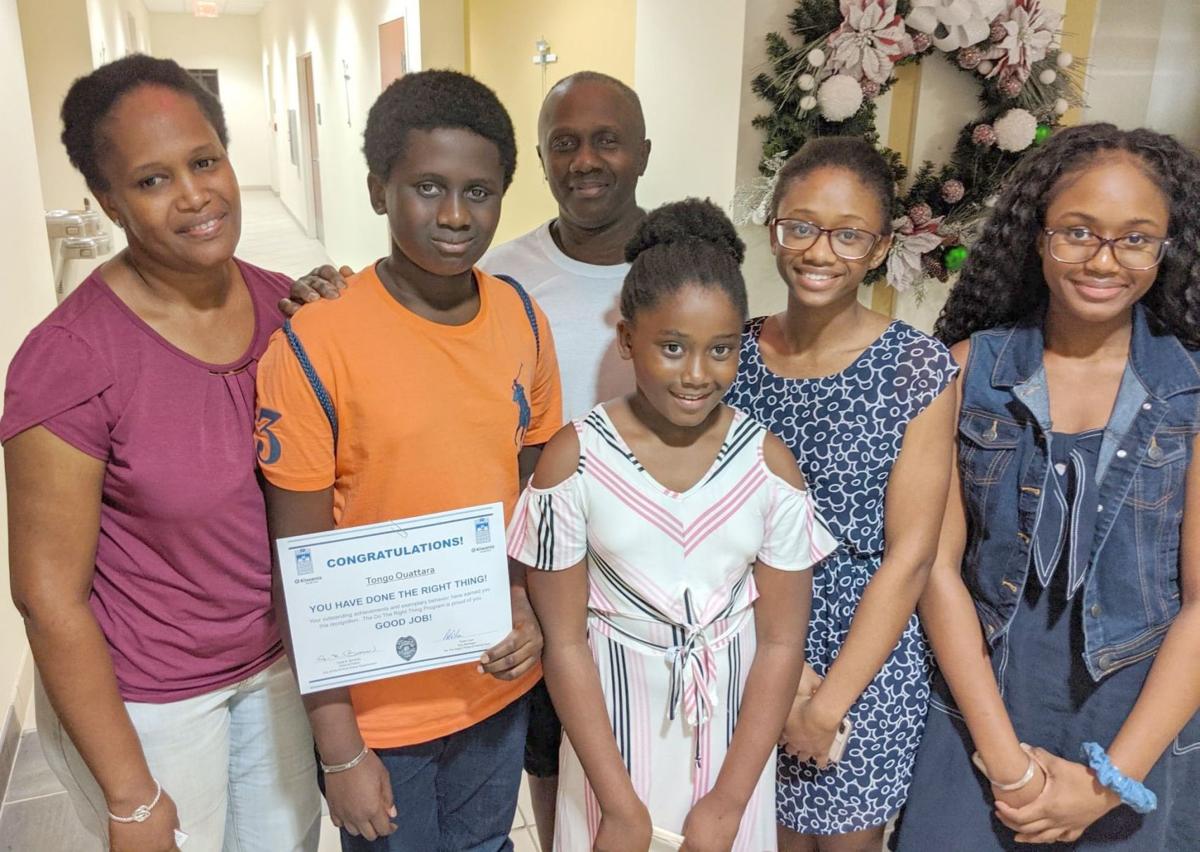 Tongo Ouattara, 11, stands with his family after receiving the new North Port Police Department and Kiwanis Club of North Port’s Do the Right Thing award.

Mason Lowe, 6, Aubrie Lowe, 10, Tyler Lowe, 6, and Addison Lowe, 9, were honored as one of the first winners of the Do the Right Thing award recently at city hall in North Port.

North Port Police Sgt. Scott Miranda explains that the Lowe children sacrificed their birthday parties by having community clean-ups on their special day. They were nominated for the police department’s new Do the Right Thing award.

Tongo Ouattara, 11, stands with his family after receiving the new North Port Police Department and Kiwanis Club of North Port’s Do the Right Thing award.

The 11-year-old Toldeo Blade Elementary School student was chosen by the school to help a younger student start making good choices. For his hard work, Ouattara was recently honored for making a difference as a mentor to a first-grader at their school.

“We have been having difficulties with a first grade student who was exhibiting poor behavior and bad study habits,” wrote James O’Leary, Sarasota County School Resource Officer at Toledo Blade Elementary School in the nomination form for Ouattara. “It was decided that we should try to partner the student with an older buddy who could talk to the student on his level and also set a good example.”

O’Leary asked Ouattara if he would mentor the younger student. He agreed and has been helping ever since.

“In the ensuing weeks, Tongo has been a positive influence on the student through their interactions,” O’Leary wrote. “The student also enjoys his time with Tongo. We have been able to use their time together as a positive reward for good behavior. Consequently we do not allow them to meet together when the reward is not deserved. Tongo is part of the team working to ensure the student’s success. His selflessness is the reason why Tongo is worthy of the Do the Right Thing award.”

“It was very nice to meet the police officers,” Ouattara said. “I like my certificate. I want to thank Mr. O’Leary for nominating me for this award.”

O’Leary learned the NPPD recently launched the Do the Right Thing program through a joint partnership with the North Port Kiwanis Club. He knew exactly who should be the school’s first nominee.

Ouattara and his family were invited to the commission meeting as part of the inaugural Do the Right Thing kickoff.

“I think it was great that Officer O’Leary also came to support Tongo,” said North Port police Sgt. Scott Miranda, who oversees the program for the NPPD. “Ouattara seems like a very kind student who is willing to help out and do the right thing. We are glad to give him this award.”

Another family also watched their children receive the first Do the Right Thing award at city hall.

Deborah Lowe, also known to her grandchildren as YaYa, nominated her grandchildren—Aubrie, 10, Addison, 9, and twin 6-year-olds Mason and Tyler—for replacing their birthdays with a community clean-up.

Lowe said the children had challenges this year, but instead of feeling sorry for themselves, they spend time volunteering on the school safety patrol and student council. On their birthdays, they filled garbage bags with trash throughout North Port.

Garrison bent down and shook hands Mason and Tyler. He also congratulated Addison and Aubrie for giving back to the community at such early ages.

“We couldn’t have asked for a better group of children to kick off this program,” Garrison said. “We welcome more nominations because recognizing children for their dedication to our community is important for our department.”

Earlier this year, North Port Kiwanis Club members approached Garrison and Miranda about starting a Do the Right Thing program to recognize and reward local students for exemplary behavior, accomplishments and good deeds. The DTRT award distinguishes exceptional school-age children who choose to be drug and crime free, exhibit non-violent behavior, do well in school, make a difference in their communities and demonstrate turnaround behavior.

“We can’t be everywhere in the community, so we rely on teachers, the SROs, parents, grandparents and anyone who knows of a student who is worthy of this award to nominate a student,” Garrison said. “We appreciate the partnership with the North Port Kiwanis Club.”

For years, all law enforcement agencies in Sarasota County participated in the Do the Right Thing program through the Sarasota County school board led by member Caroline Zucker. About three years ago, the countywide program ended. Students were no longer honored locally.

“We know there are about 10,000-school age children in North Port and many of them are doing something that could be worthy of this award,” said Andrew Sias, North Port Kiwanis Club. “In the past, there were a lot of elementary, middle and high school students from North Port who were honored through the school board’s Do the Right Thing program.

“But for the past few years, no students have been recognized at all for their good deeds. Kiwanis is an organization that supports children. We want to help the North Port police reward good kids for their outstanding works in our community.”

Students selected for the award receive a “swag bag” including a custom T-shirt and goodies.

“At the end of the school year, we will have a banquet for the monthly award winners,” said Bill Haugh, past president of the North Port Kiwanis Club. “We will bring together the students and officers for a complimentary dinner.”

Miranda said the overall winner of the North Port award will be nominated for the state award banquet held in the Miami area.

“Our goal is to demonstrate that ‘good kids’ are newsworthy and foster positive relations between the police department and youths,” Miranda said.

If you know of a youth who has accomplished, assisted, or made an outstanding effort as a positive role model for their peers, nomination forms can be completed and handed in to your SRO. You can also complete it online at www.cityofnorthport.com/dotherightthing and mail it to: Do the Right Thing, Program, 4980 City Hall Blvd., North Port, Fla. 34286