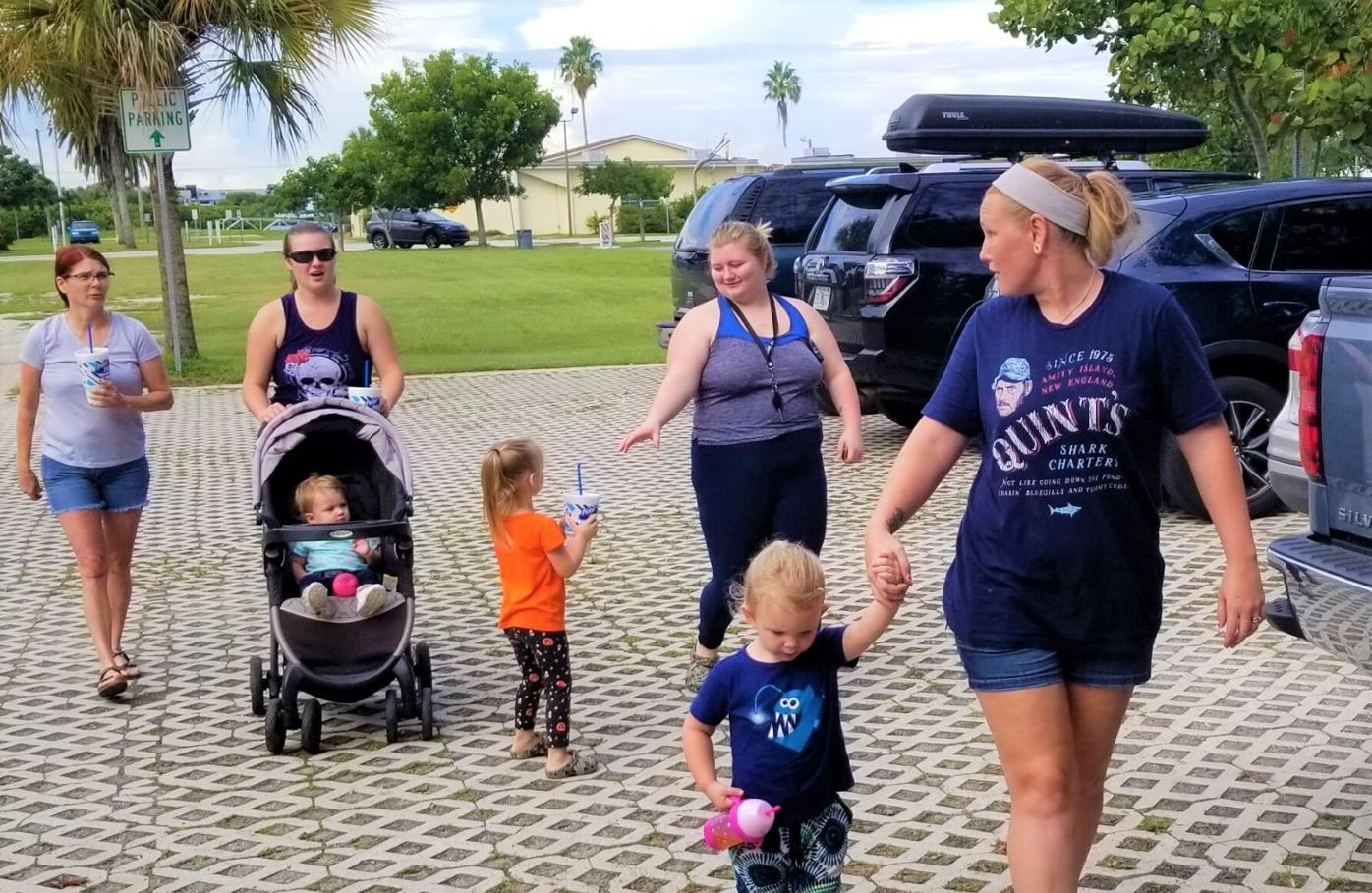 Jordan Soucie (right) with her daughter along with Kayla King (middle right), Bre King (middle left) and Mary Yamashita (left) take their kids to the playground at Gilchrist Park in Punta Gorda. Soucie said that they always have to get their early because there isn’t enough parking at the park along West Retta Esplanade.

A driver searches for an open parking space at Gilchrist Park Thursday morning. Parking at Gilchrist has been a problem since renovations began back in 2016.

Jordan Soucie (right) with her daughter along with Kayla King (middle right), Bre King (middle left) and Mary Yamashita (left) take their kids to the playground at Gilchrist Park in Punta Gorda. Soucie said that they always have to get their early because there isn’t enough parking at the park along West Retta Esplanade.

A driver searches for an open parking space at Gilchrist Park Thursday morning. Parking at Gilchrist has been a problem since renovations began back in 2016.

PUNTA GORDA — After almost a decade of design, debate and development by the city, parking remains a major problem for people at Gilchrist Park in Punta Gorda.

“You have to get here pretty early if you want a spot,” said Jordan Soucie, who brings her daughter to the park’s playground on a regular basis. “It’s a pain in the butt to park in the playground parking lot.”

“This playground gets really busy because it’s one of the only fenced-in playgrounds,” Soucie continued. “If there isn’t any parking, then you have to park way down by the tennis courts and walk along the street all the way to the playground, and we have 2-year-old kids and babies. I hope the city does something about it.”

“It needs more parking,” said Bre King, who also brings her kids to the playground. “I hope they use concrete (for the playground lot) because the surface they have now isn’t stable. It sinks in at some spots. Also, if a truck parks in one of the spots by the entrance, people can get blocked in ... I have.”

As the city approaches phase two of the renovation project, the conversation continues on just how to move forward with parking between Gill Street to just west of Berry Street along West Retta Esplanade.

The project could add around 170 new spaces in the park and along the street. The park currently has 121 spaces and eight ADA spaces.

“I think they need more parking,” said Jamie Joslan, who runs in the park. “It gets really full on Sundays with people coming out with dogs, bikes and kids. I love the on-street parking. If they could do that more along Retta, that would be great.”

At a Sept. 9 meeting, the City Council agreed that they need to get the project moving but held off on making any decision due to estimated cost issues for the project.

In the next two months, construction will wrap up for the Harborwalk portion of the project. To complete the entire second phase, city staff needs almost $960,000 more for the $2.2 million project, according to city documents.

“I think we have to figure this out and get it done,” Vice Mayor Lynne Matthews said at the meeting. “We’ve been kind of jerking around with this for a long time. Let’s find the money to do it and if we have to use undesignated funds from the 1% program that may be left over, I suggest that we move it forward with that to bridge the gap and just get this done. We have to get it done.”

The city’s 1% sales tax is collected on taxable purchases within Charlotte County to serve as funding for infrastructure projects.

Improved parking has been always been the city’s goal with the overall renovations at the park.

Work on the east area of the park — behind the PG Waterfront Hotel — began back in 2016.

Before then, park-goers could park basically where ever they wanted, including in the grass. When that section of the park reopened in 2017, that was no longer the case.

“We took away a huge amount of parking spaces when the first phase of Gilchrist Park was done which I still have a problem with,” Matthews said. “I still think we need to revisit that down the road. ‘Area A’, we did the ingress road that runs parallel to the hotel where we used to have the L-shaped driveway and I think we definitely need to go back and revisit that going forward.”

There are eight total sections being proposed for parking — five along the street and three lots within the park.

Council members did consider removing some of those sections to reduce the cost of the project but that too went undecided.