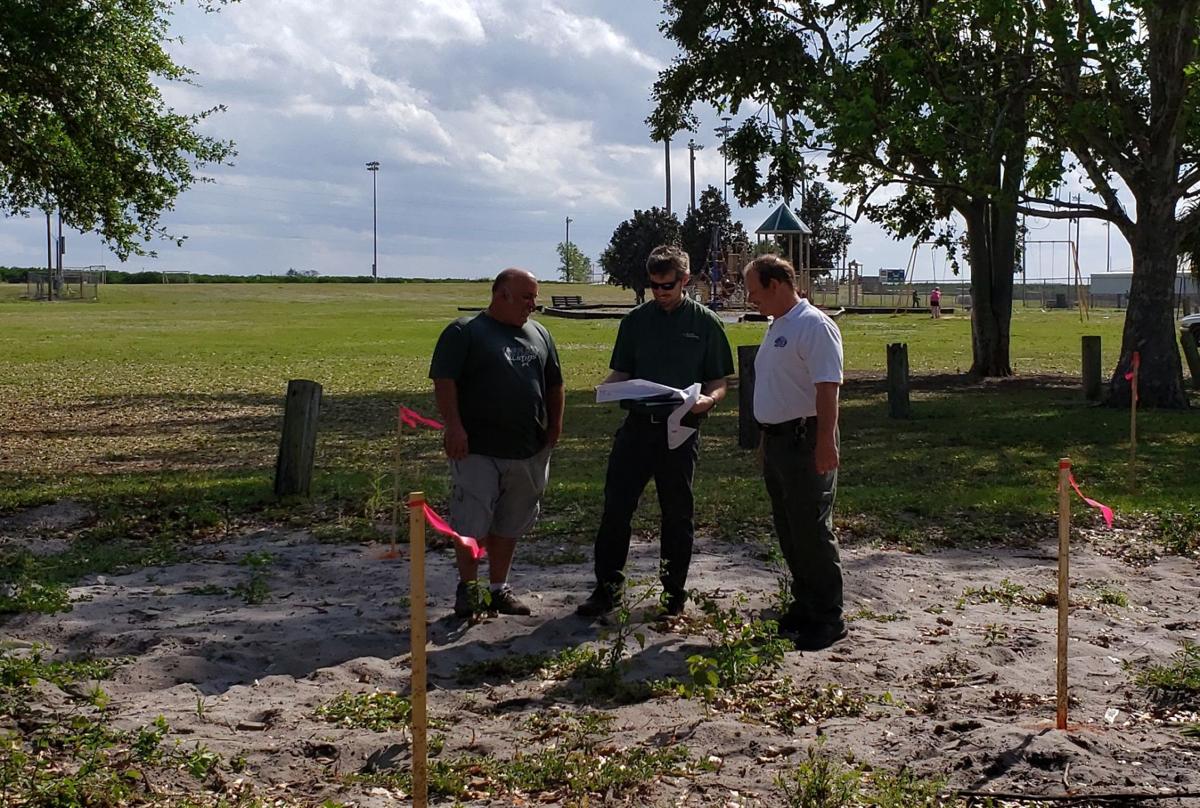 Harry Durbano, Drew Jones and Phil Williams look over the plans Wednesday for Phase I of the Lake June improvement project.

Plans were redrawn to keep these old shade trees at the Lake June site where construction on new pavilions will start soon.

Harry Durbano, Drew Jones and Phil Williams look over the plans Wednesday for Phase I of the Lake June improvement project.

Plans were redrawn to keep these old shade trees at the Lake June site where construction on new pavilions will start soon.

LAKE PLACID — In just a few short weeks, dirt will soon be turning at the Lake June Ball Fields on the beach side in the first step of a multi-phase project that will transform the popular swimming and family picnic area. The entire area will eventually get a complete overhaul.

Technically, the first shovel was turned when the town razed the original pavilion several months ago. The old pavilion was too decrepit to fix and the bathrooms kept being targeted by vandals.

Phase I will include one large pavilion and a secondary, smaller pavilion. A bathroom will be erected and will be modeled after the Stuart Park restrooms, affectionately called the Brantley Bathrooms, after designer and builder Bill Brantley.

Handicapped parking will be installed to be compliant with Americans with Disabilities Act, according to Drew Jones of Polston Engineering. Jones, Recreation Supervisor Harry Durbano and Town Administrator Phil Williams met at the site to confirm layout and other details.

Despite redrawing plans once in order to save the old, large shade trees, the park will probably lose one of the smaller trees.

Montz Construction of Lake Placid came in with the winning bid and was awarded the contract.

Jim Aul is the office manager for Montz Construction.

“We will have the project started by May 1,” he said. “It will be substantially complete by Aug. 25. We will fence the area in as much as possible. We have to keep the kids out.”

The project was estimated to cost $500,000 in 2016, so it was divided into phases. The town got some help in funding from Highlands County Recreational and Parks Advisory Committee, which granted the town $277,770 with the town contributing $16,500.

The county’s Tourist Development Council came up with $60,000 for the restrooms, as Lake June is one of the most visited parks by area residents as well as tourists.

The Florida Fish and Wildlife Conservation Commission will provide nearly $9,000 in grant money for a new dock. There is some question as to whether the Lake Placid Town Council will take the funds because of some language that needs to be clarified in the contract. That item is on the agenda for the town’s regular monthly meeting at 5:30 p.m. Monday, April 8.

Williams said if the town does not take the grant, he would look into other ways to fund that part of the project.

Williams said the town may hold off on Phase II for a while. RPAC has asked for a list of projects that it may fund in the future. Durbano, a member of RPAC, said since it does not have a lot of funds, it would like to start making plans on where the members want to see the funds go to.

Williams has been asked by Miracle League officials for a handicapped accessible bathroom near their field. Williams thinks it is a worthy project. Currently, All Around Septic donates a handicap accessible port-a-let during the season.