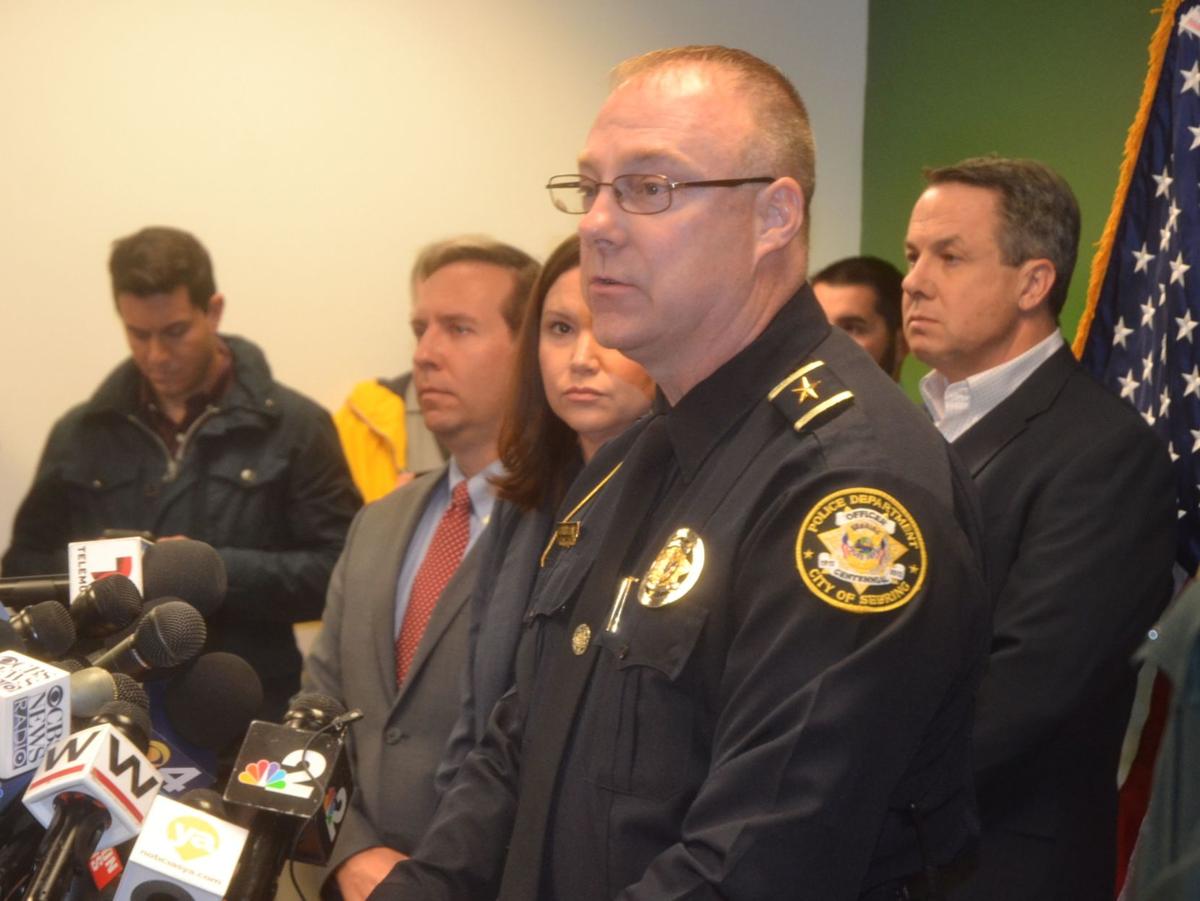 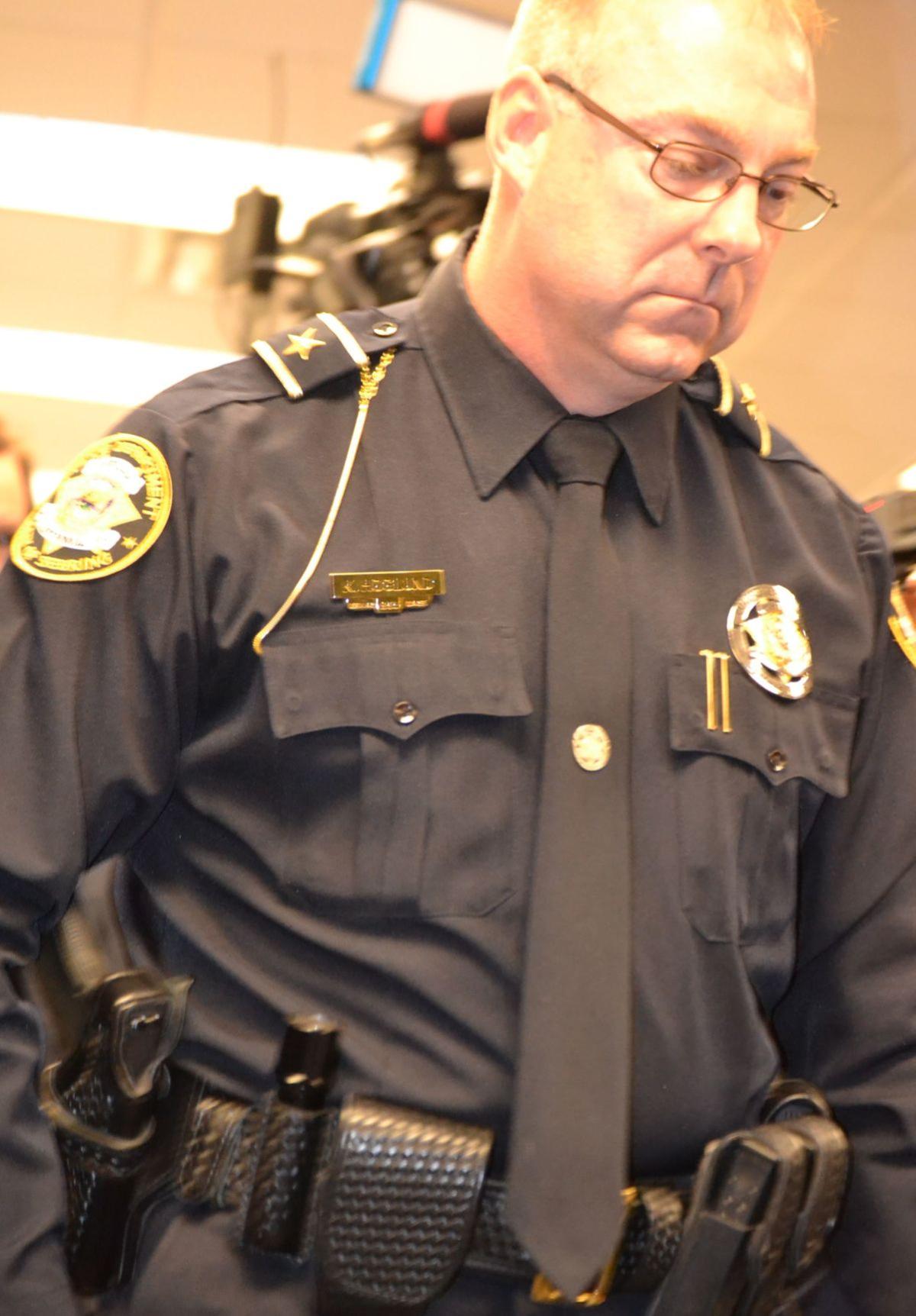 Walking into Thursday morning’s press conference about Wednesday’s mass shooting, Sebring Police Chief Karl Hoglund betrays a bit of the sorrow and burden of investigating what he has called a ‘senseless crime’ with no apparent motive to the deaths of five women at SunTrust Bank at U.S. 27 and Tubbs Road in Sebring. 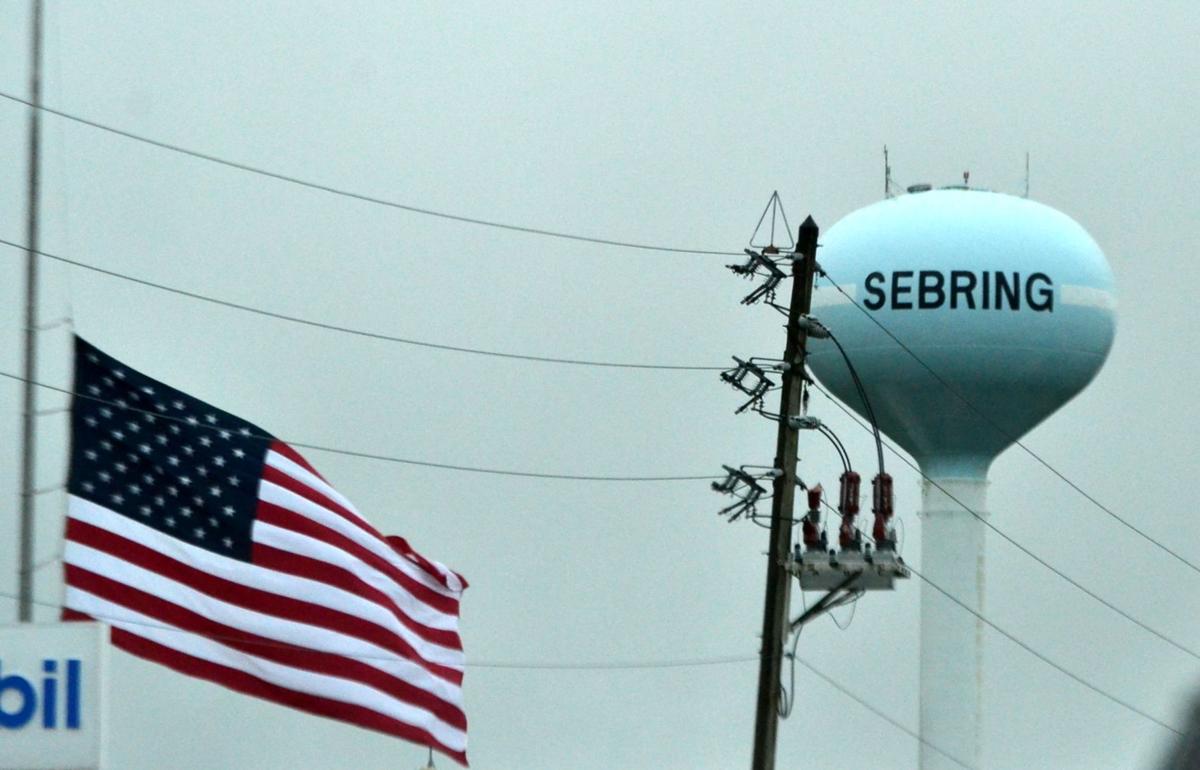 A flag at Wauchula State Bank in Sebring flies at half staff, as requested Thursday by Gov. Ron DeSantis in memory of the five women shot and killed Wednesday in a mass shooting at the SunTrust Bank at 1901 U.S. 27 South. DeSantis has asked flags statewide to fly at half staff until sunset on Feb. 1. 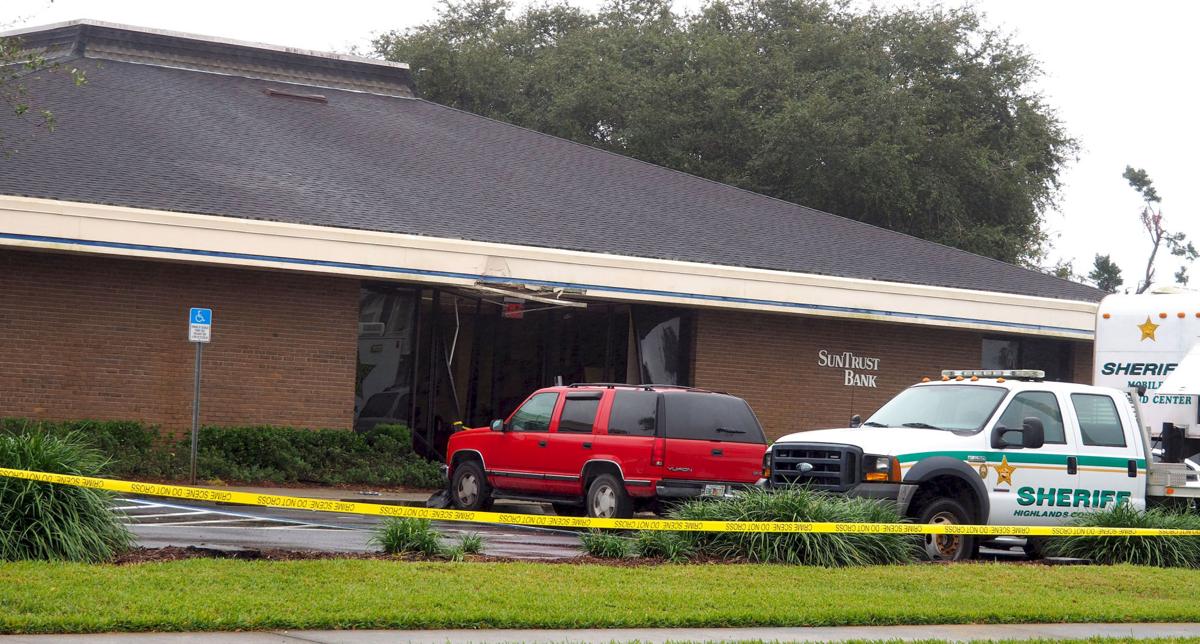 The busted front entrance to the SunTrust Bank in Sebring is visible in this photo. The bank was the scene Wednesday of the city’s only mass shooting where five women were shot and killed.

Walking into Thursday morning’s press conference about Wednesday’s mass shooting, Sebring Police Chief Karl Hoglund betrays a bit of the sorrow and burden of investigating what he has called a ‘senseless crime’ with no apparent motive to the deaths of five women at SunTrust Bank at U.S. 27 and Tubbs Road in Sebring.

A flag at Wauchula State Bank in Sebring flies at half staff, as requested Thursday by Gov. Ron DeSantis in memory of the five women shot and killed Wednesday in a mass shooting at the SunTrust Bank at 1901 U.S. 27 South. DeSantis has asked flags statewide to fly at half staff until sunset on Feb. 1.

The busted front entrance to the SunTrust Bank in Sebring is visible in this photo. The bank was the scene Wednesday of the city’s only mass shooting where five women were shot and killed.

SEBRING — Officials on Thursday morning released the names of three of the five women shot and killed Wednesday at SunTrust Bank in Sebring’s first mass shooting.

Cynthia Lee Watson, 65, was the only customer in the bank at that time. Marisol Lopez, 55, was one of the employees.

Families of the other victims have requested that Sebring Police Chief Karl Hoglund not release their loved ones’ names, in accordance with Marsy’s Law.

Marsy’s Law, passed as Amendment 6 last November, creates constitutional rights for victims of crime, including the right to prevent disclosure of information or records that could be used to locate or harass a victim or a victim’s family.

The other two victims were 54 and 31 years old. Hoglund said all those killed were women. Only one was a customer.

Hoglund said at 12:30 p.m. Wednesday when 21-year-old Zephen Allen Xaver entered the bank at 1901 U.S. 27 South, on the corner of Tubbs Road, he immediately contacted employees and the customer, and overtook the bank by force.

“He then shot everyone in the bank,” Hoglund said.

Hoglund had to contain emotion as he said Xaver “knowingly and intentionally took the lives of five of our fellow community members.”

“Our sisters, our mothers, our daughters and our coworkers,” Hoglund said, his voice breaking at “daughters,” before continuing.

“Perhaps most unfortunate, we now refer to them as victims,” Hoglund said, “of a senseless crime.”

When asked at the press conference, Hoglund said detectives have not found where Xaver had an apparent motive or connection to the bank.

Scott Dressel, public information officer for the Highlands County Sheriff’s Office, reported after the press conference that there was another bank employee in a back break room when the incident began.

Upon hearing the shots, the employee ran out a back door and contacted law enforcement.

Dressel said law enforcement would not release any other information about this employee.

When asked after the press conference about obtaining tapes of Xaver’s 911 call, Dressel said it would be exempt from public records requests under Florida Statute 119 as a potential confession.

Xaver allegedly had told dispatchers he was inside the bank armed with a 9mm handgun and wearing a bulletproof vest.

Law enforcement maintained tactical positions and observation until support units could arrive, including the Crisis Negotiation Team, which established contact with Xaver.

At 12:44 p.m., the Sheriff’s Office called for members of the Special Weapons And Tactics (SWAT) Team, Hoglund said.

During negotiations, Hoglund said, it appeared Xaver would not give police or deputies access to the victims. At that point, 1:54 p.m., Hoglund requested the SWAT Team enter the bank.

Arrest affidavits state deputies found a bulletproof vest and 9mm handgun in the rear office where they found Xaver.

“Unfortunately, all victims had succumbed to their injuries inside the bank,” said Hoglund, his voice breaking again.

Xaver has since been formally charged with five counts of first degree murder.

The Highlands News-Sun has chosen not to report the details of the deaths of the victims.

“The law enforcement agencies have worked together in a cooperative manner to ensure that they can move forward successfully in the legal system,” Moody said. “We stand ready to assist them; we stand ready to assist the victims and we have been meeting with SunTrust representatives, dozens are here from around the nation so that they can help their corporate family heal.”

She said this will not be a “quick process,” by any means.

“I can tell you as a former prosecutor and judge, successfully moving forward to ensuring that someone responsible for such a heinous act takes cooperation from law enforcement, skilled prosecutors and patience by a community that wants justice,” Moody said. “We are with you. We will be with you throughout this process and assist law enforcement.”

“It is my responsibility to prosecute this case and that we will do,” Haas said.

He said his two priorities would be to build a case that would ensure conviction and the maximum penalty under the law, and to be there for the families of the victims.

“They are hurting today in an unbelievable way and we want to be there for them to make sure the terrible thing that they have been through, that this next step, the criminal justice process, goes as smoothly as possible,” Haas said.

Haas plans to convene a grand jury in the next couple of weeks, seeking indictments for first-degree murder, and will meet with the families of the victims to go over all these steps with them in detail.

“This community is hurting unbelievably,” Haas said. “Any community that would have a case like this happen with five murders would be so difficult, but for a community the size of Sebring it is just unbelievable. But if there is a place that can make it through this, it’s Sebring and it’s Highlands County, and we will.”

“We have a wonderful community here,” Sebring Mayor John Shoop said, “and this kind of senseless, cowardice act is something that’s not even in our vocabulary.”

He said the community has been fortunate that thousands of people throughout the world, through the internet, had reached out to offer their condolences.

First responders, Shoop said, have taken the crisis to heart, some of them related to the victims, yet have performed without hesitation.

Shoop, a banker, had a connection to the building. While he worked for SunTrust Bank, the company built that building in 1989.

“We have not changed here but our world has. We need to continue leading our lives as freely as we have in the past, with the love and effort that our community (has),” Shoop said. “Our community is a very caring and giving community. It gives back as much as we give to it. We’ll walk through this together. The event will pass, unfortunately, but will not be forgotten. It is now part of our history, and we need to remember for years to come.

“None of us are untouched by what has happened,” Shoop said. “We will all grieve in our own way. We need you, everyone out there, to hug your family, your friends, coworkers, anywhere you go, just to give them peace of mind.”

He then asked people to pray for the victims, their families and each other, so that “we will all walk through this in a peaceful manner.”

Public Defender Robert Gray said neither he nor any of his agents were able to make contact with Xaver Wednesday afternoon or night at the Highlands County Jail.

“We tried to but were denied access,” Gray told the Highlands News-Sun Thursday morning.

He requested that the court order that he and his staff be allowed to have contact with Xaver, which Ritenour did do.

Ritenour asked if Assistant State Attorney Steve Houchin had any comment, and Houchin said that could be addressed at the appropriate time.

When asked about that situation, Dressel said that Xaver, on Wednesday, had not requested an attorney.

Gray told Ritenour on Thursday morning that Xaver would be exercising his due process rights, including the right not to speak to law enforcement.

Gray told the Highlands News-Sun that an investigator would be traveling from the Bartow Public Defender’s Office to conduct an initial interview with Xaver.