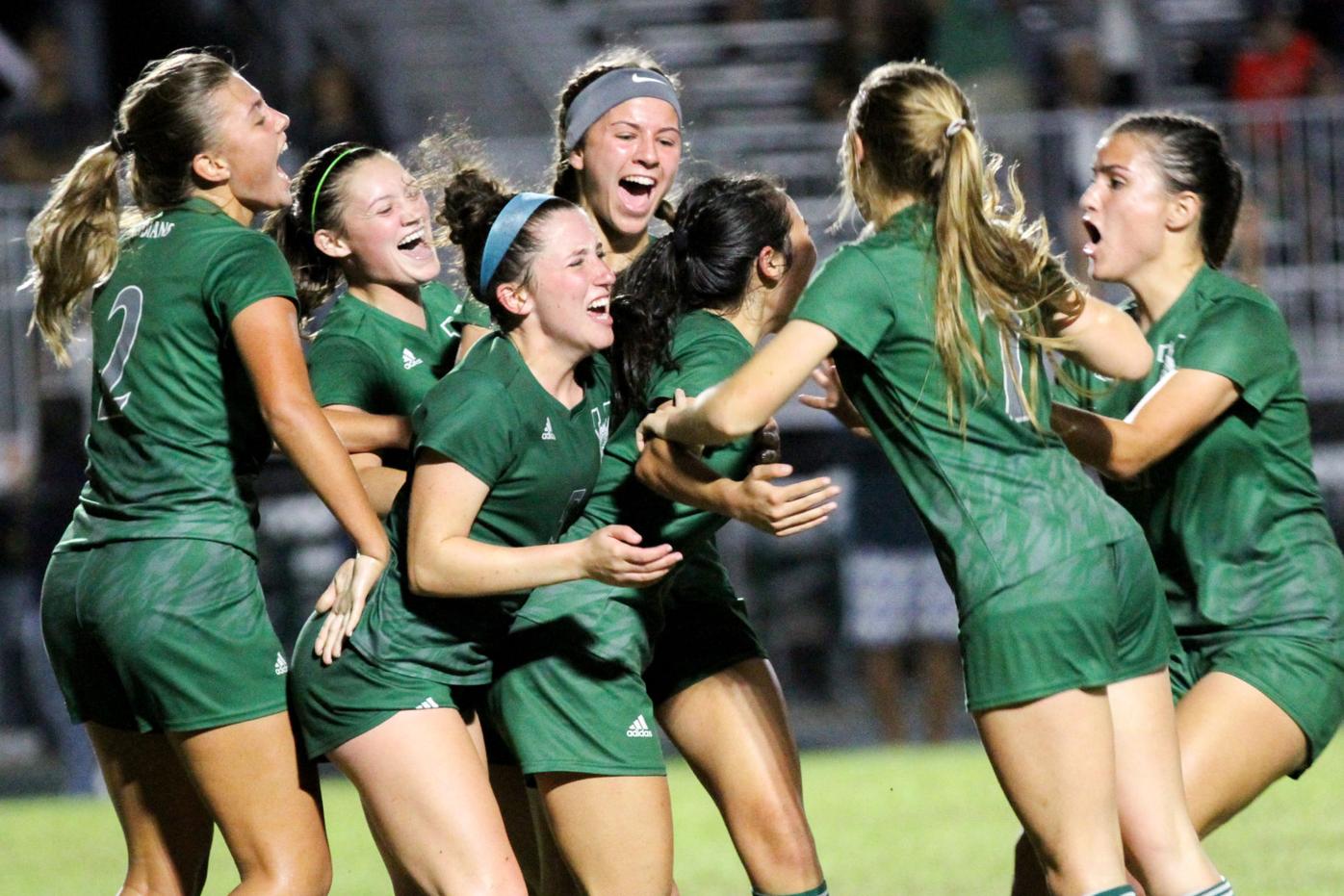 The Lady Indians mob Mason Schilling in celebration after she scored what would be the game-winning goal in the regional championship. 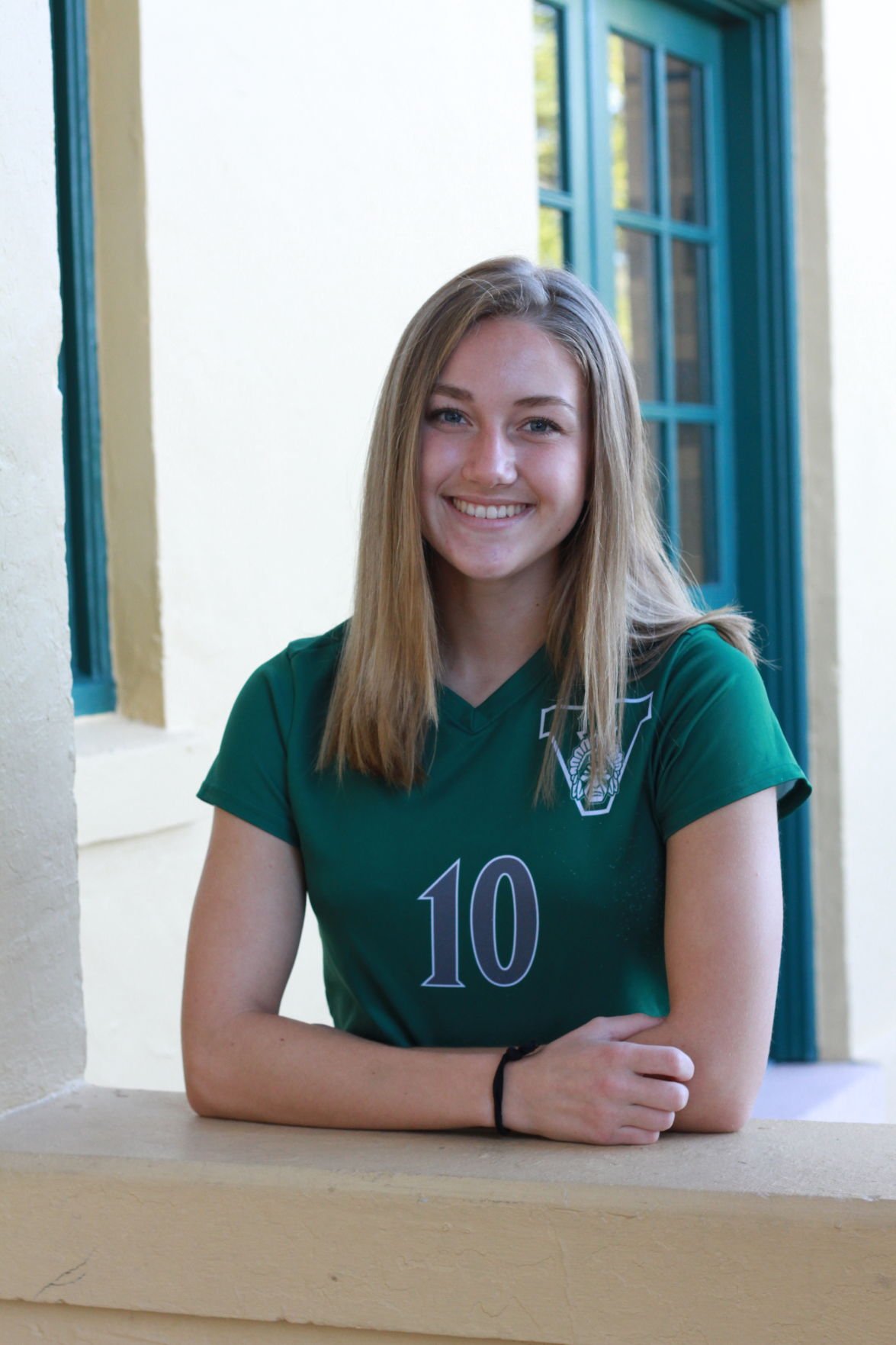 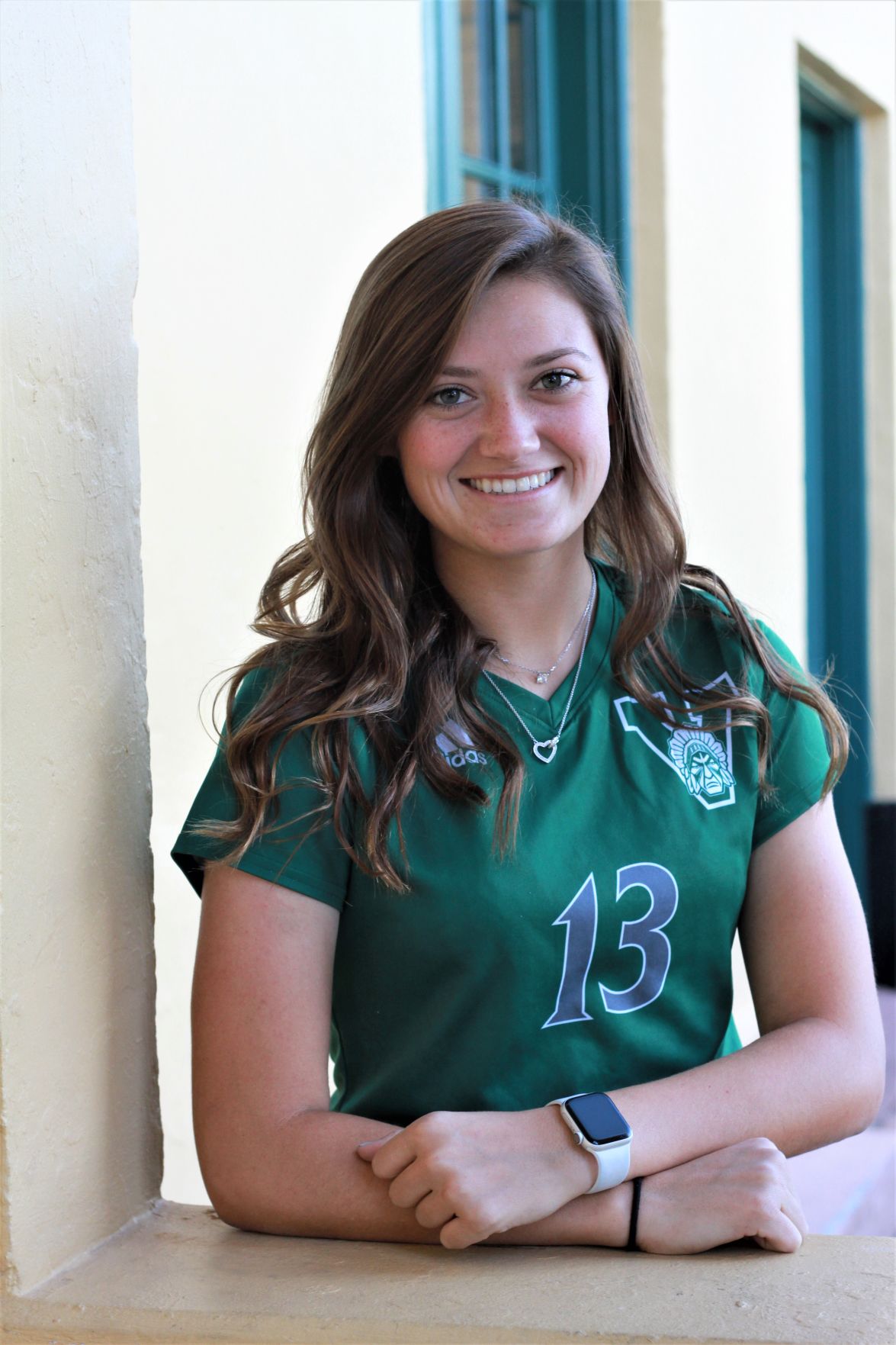 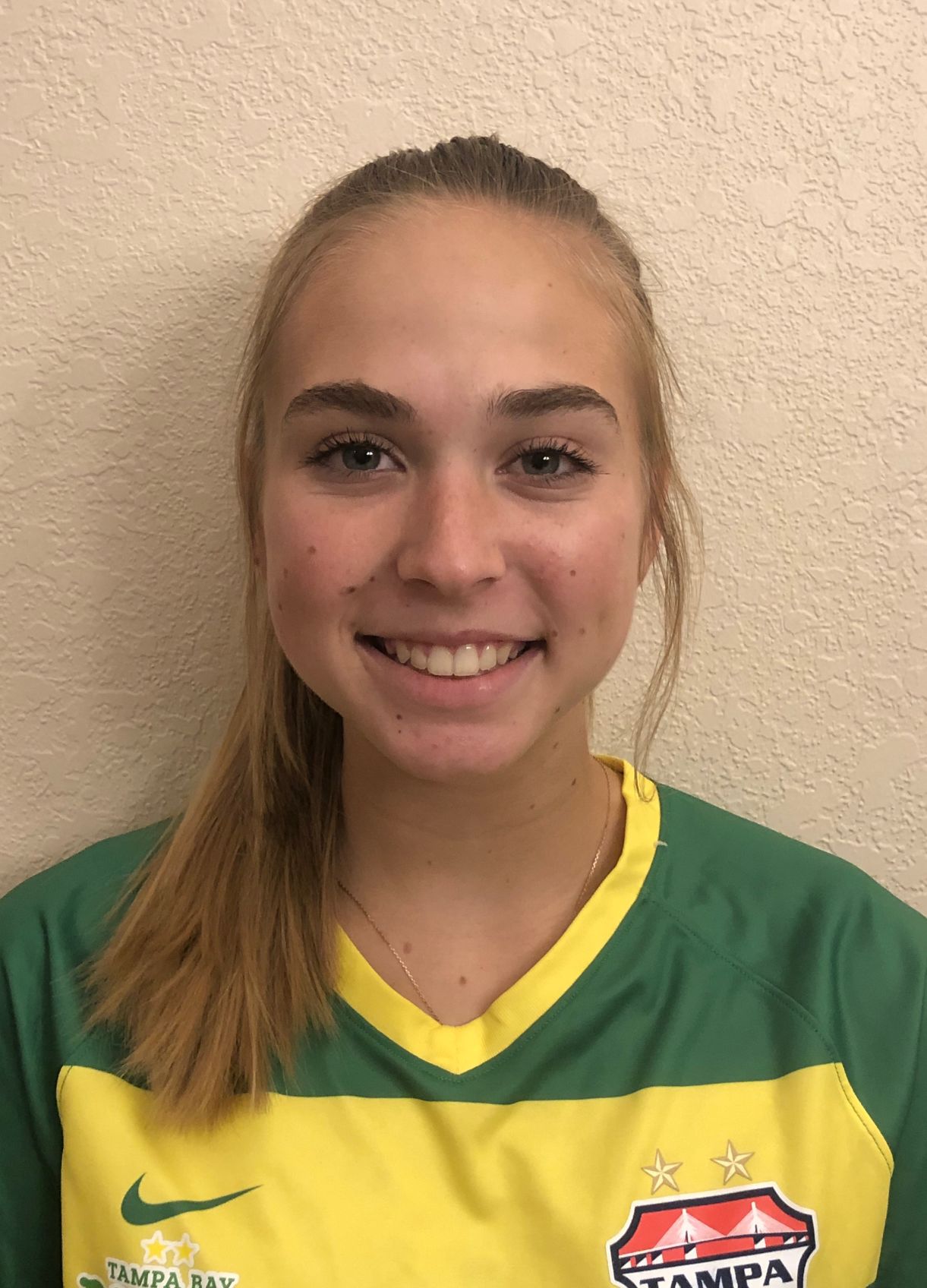 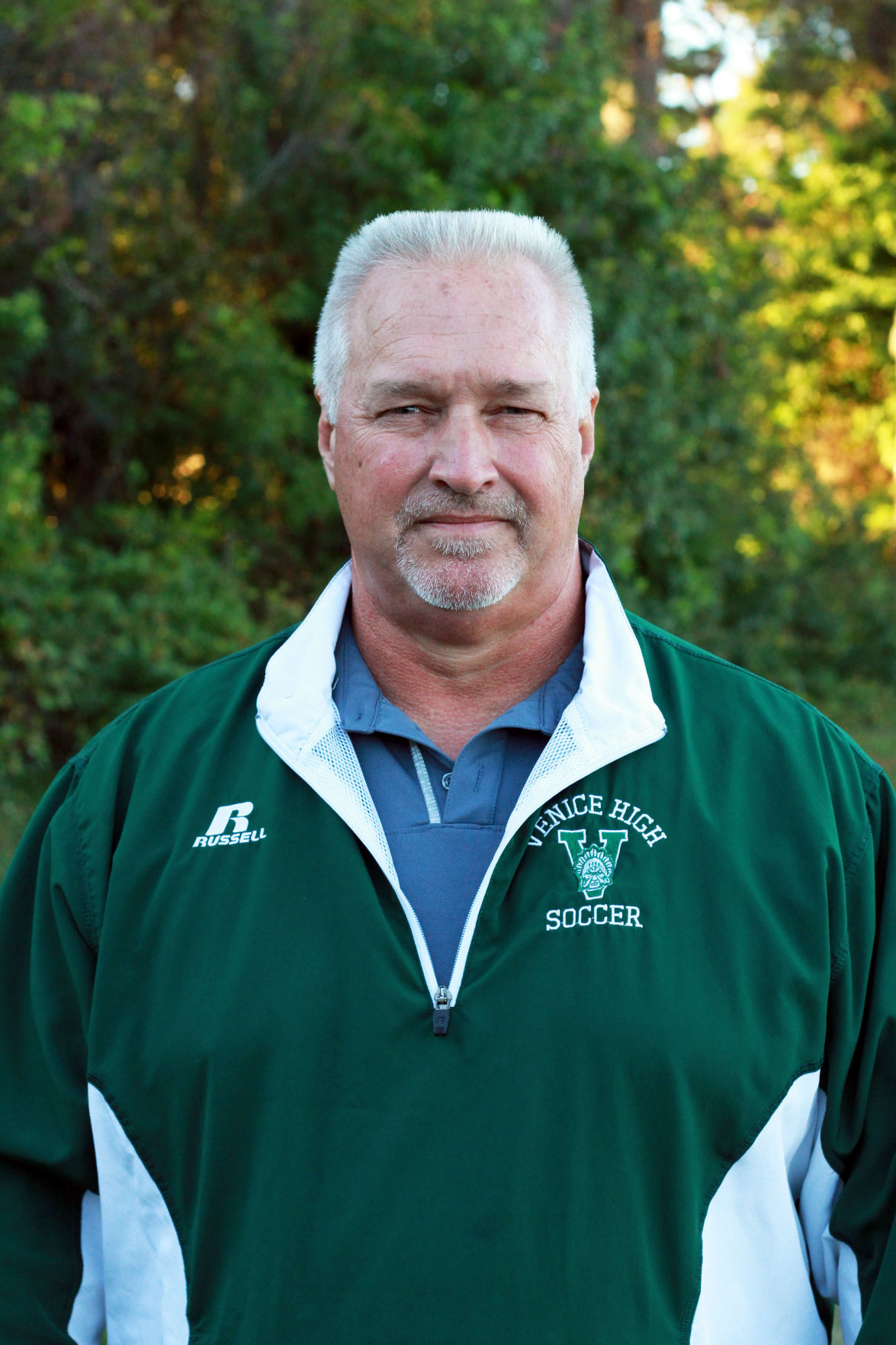 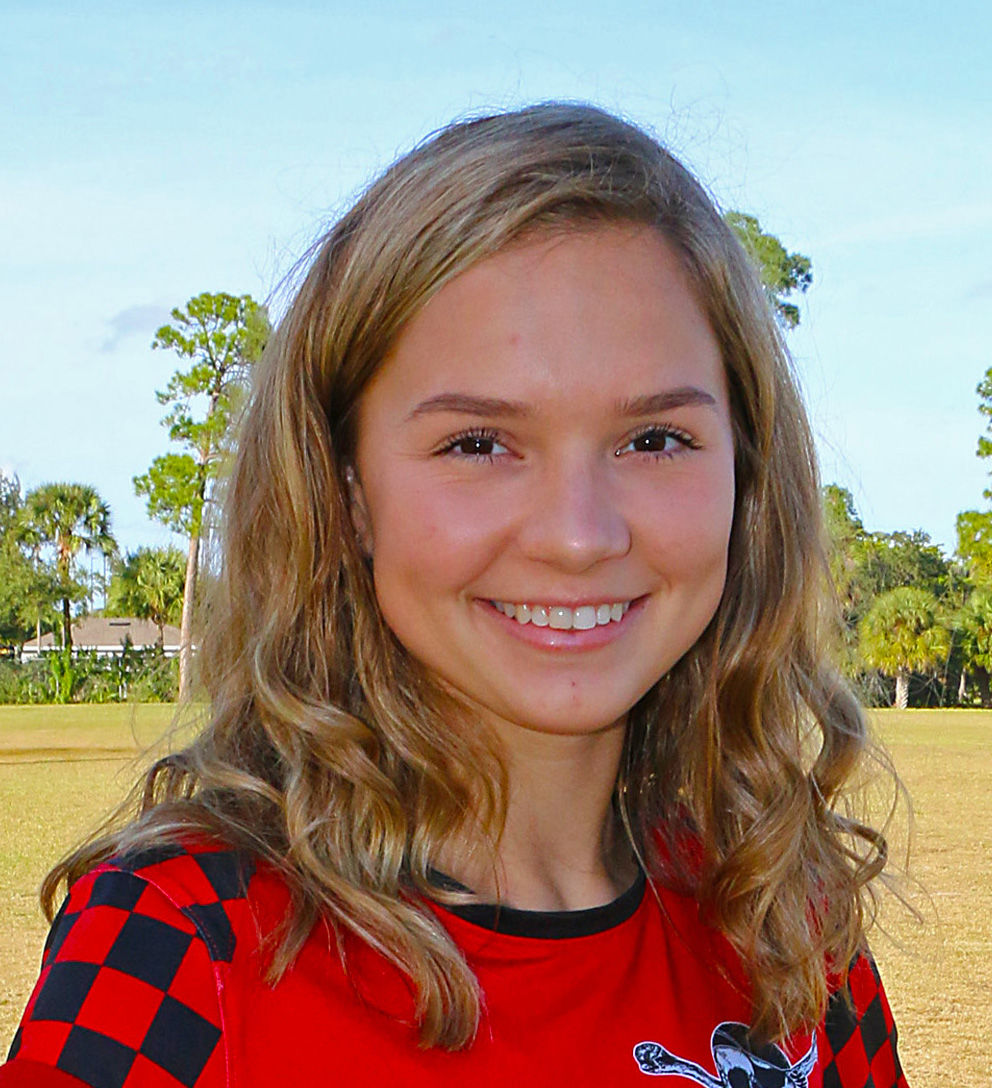 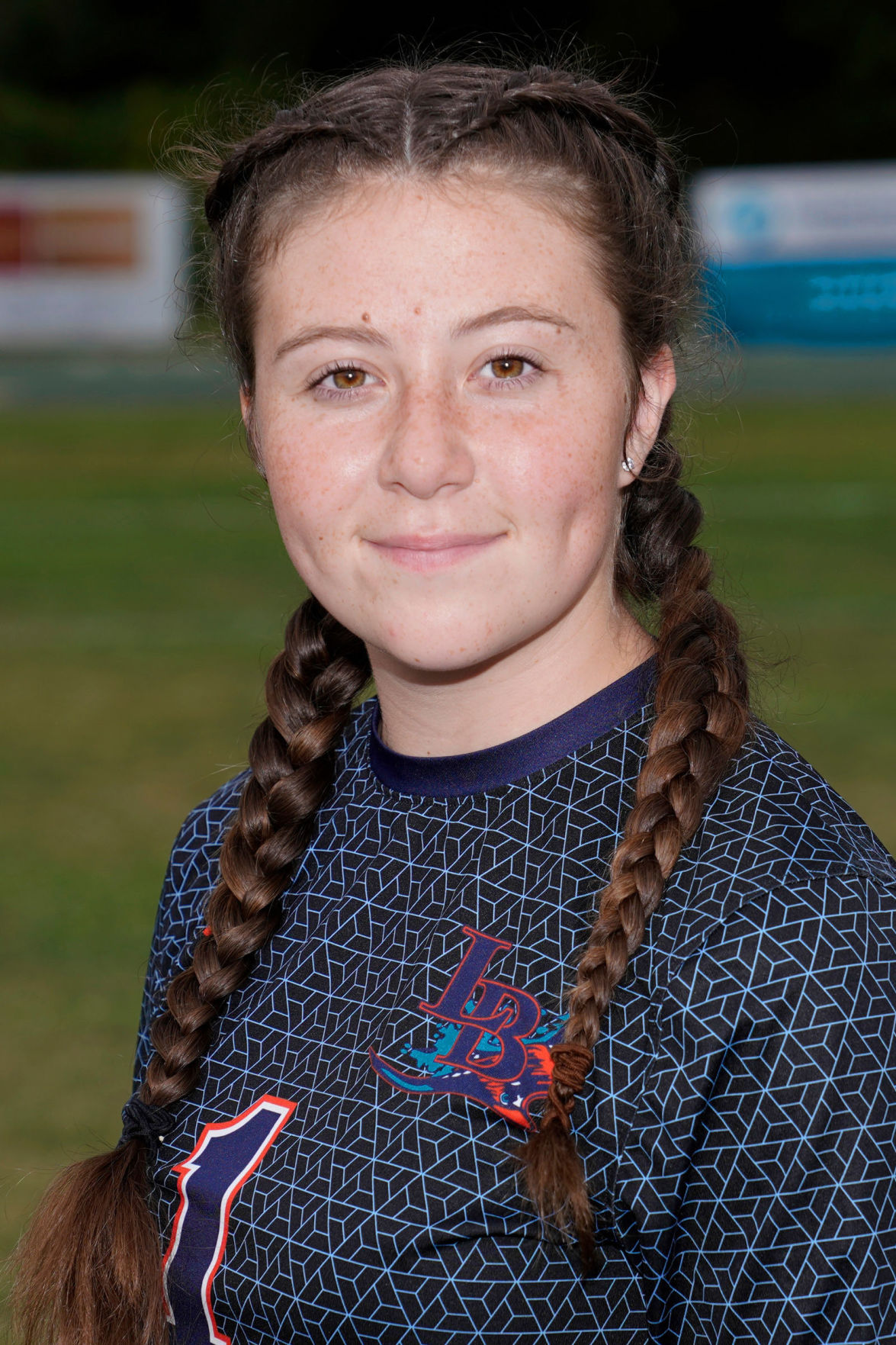 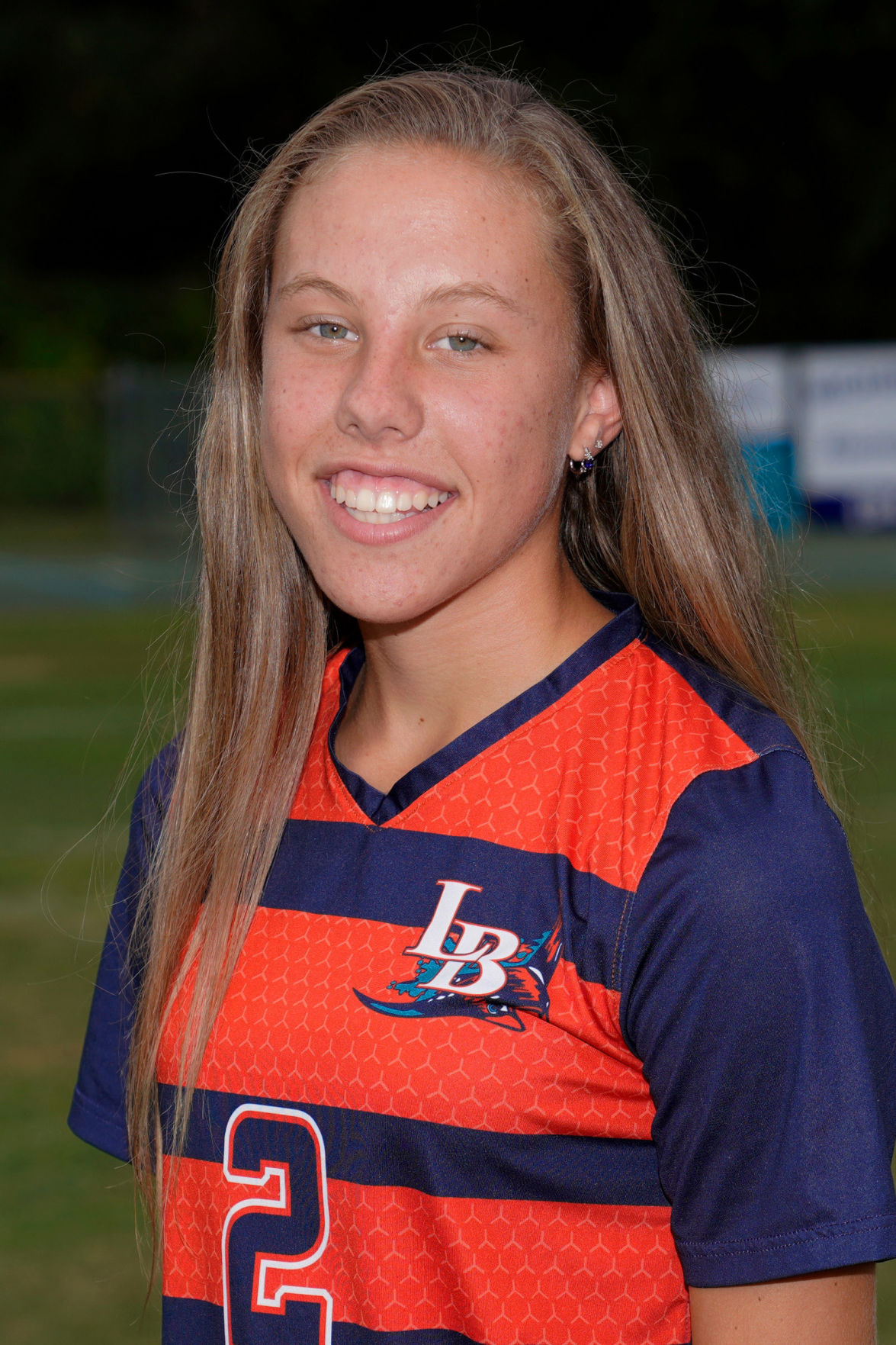 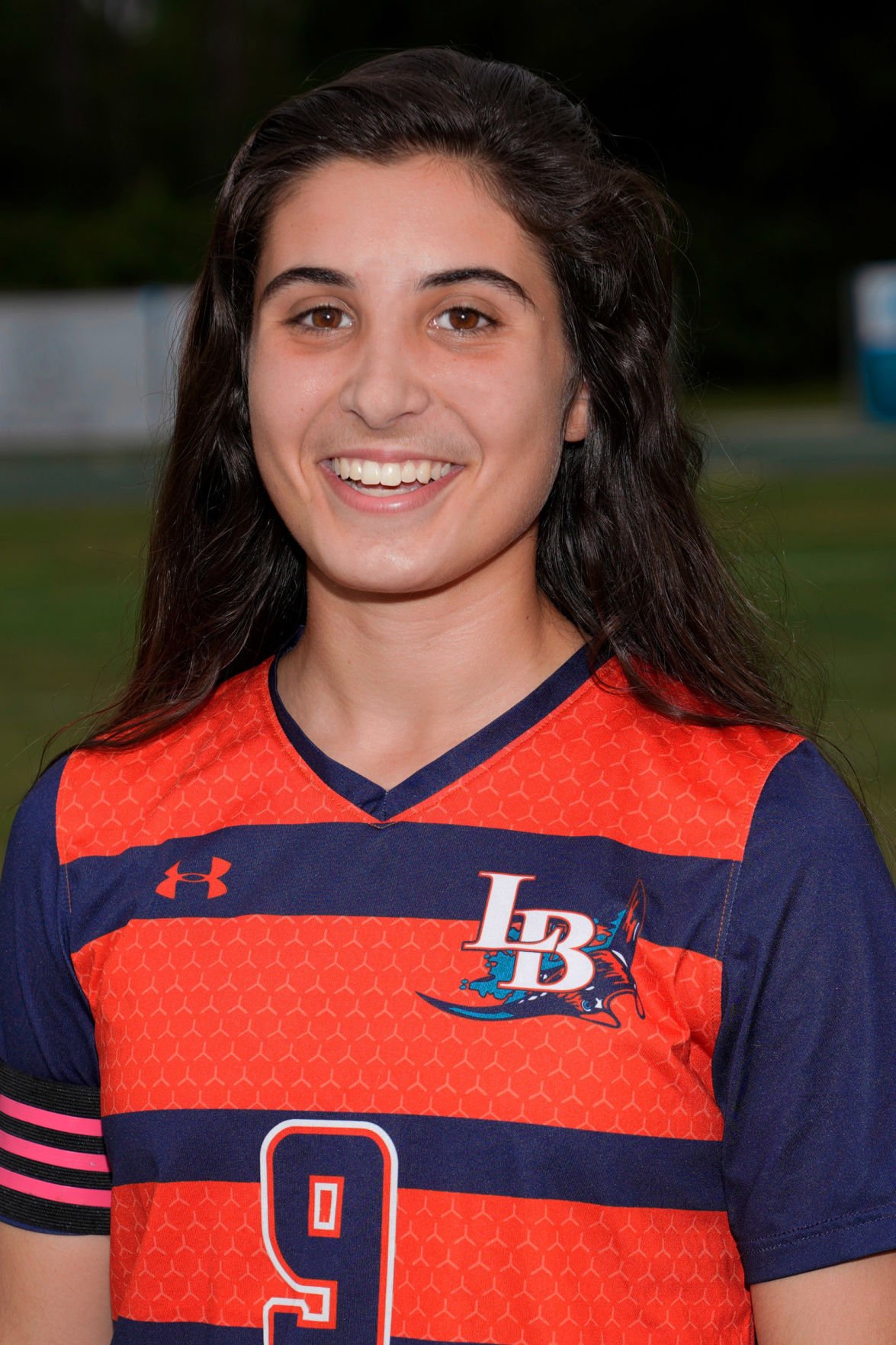 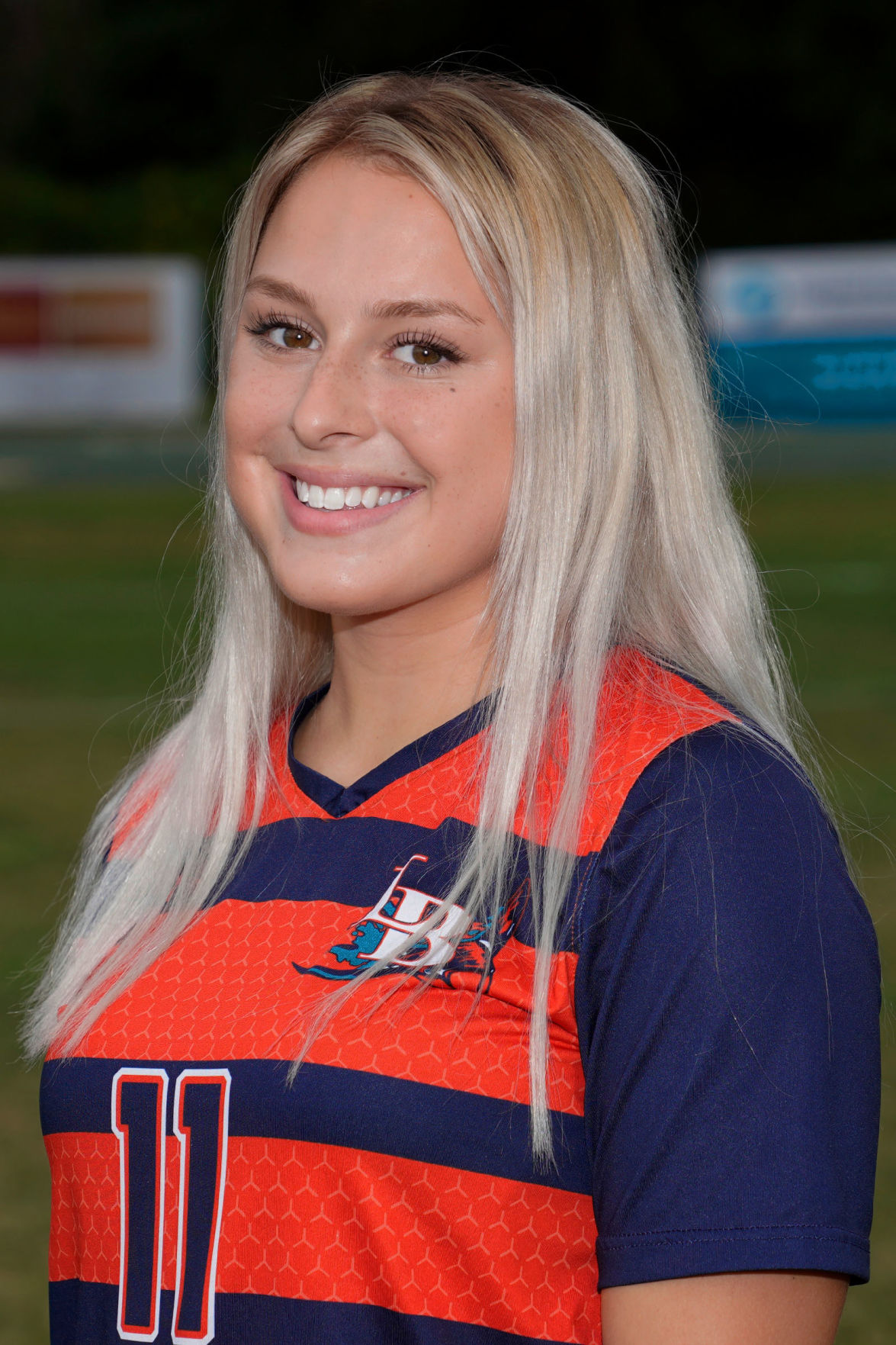 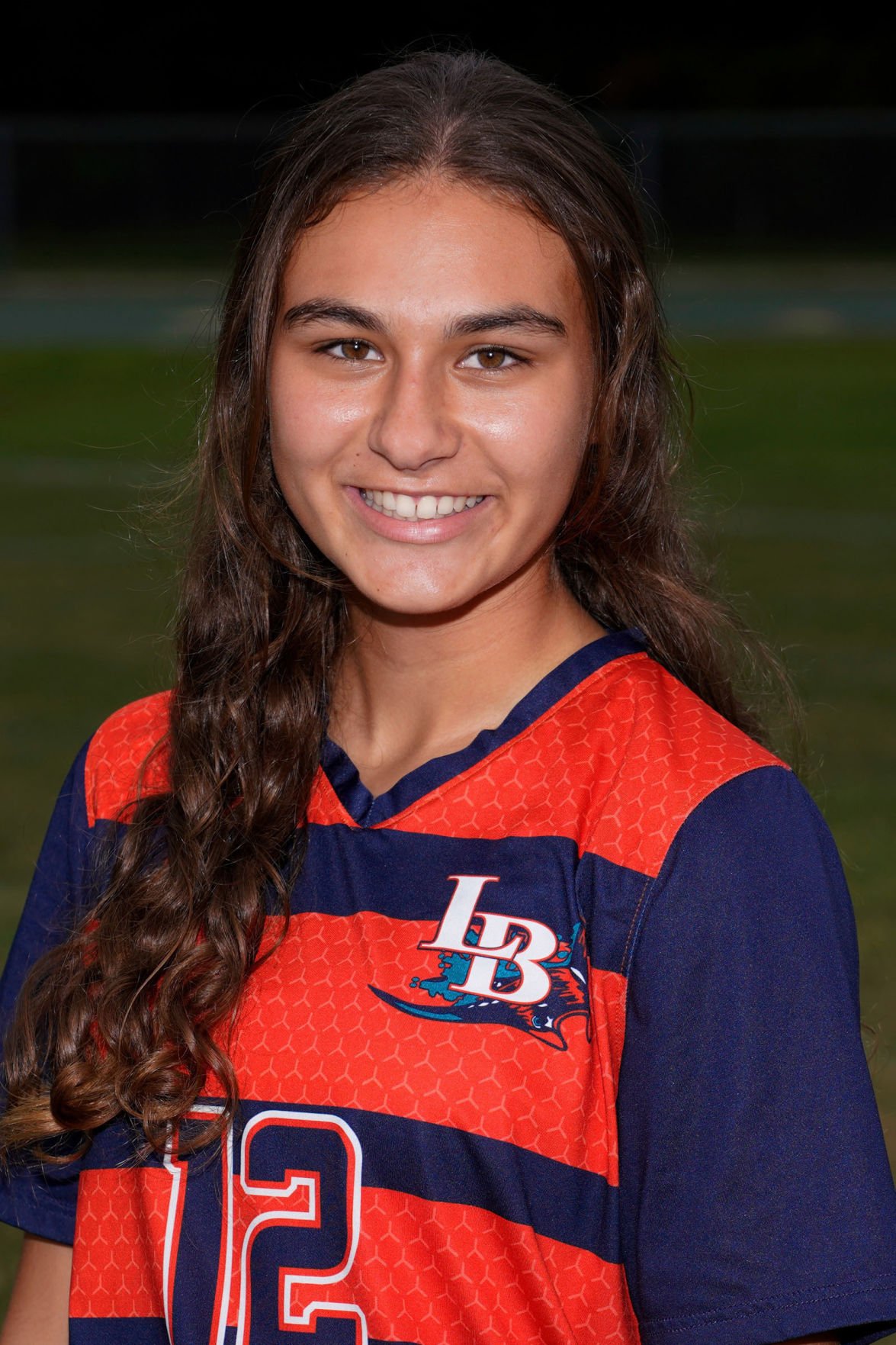 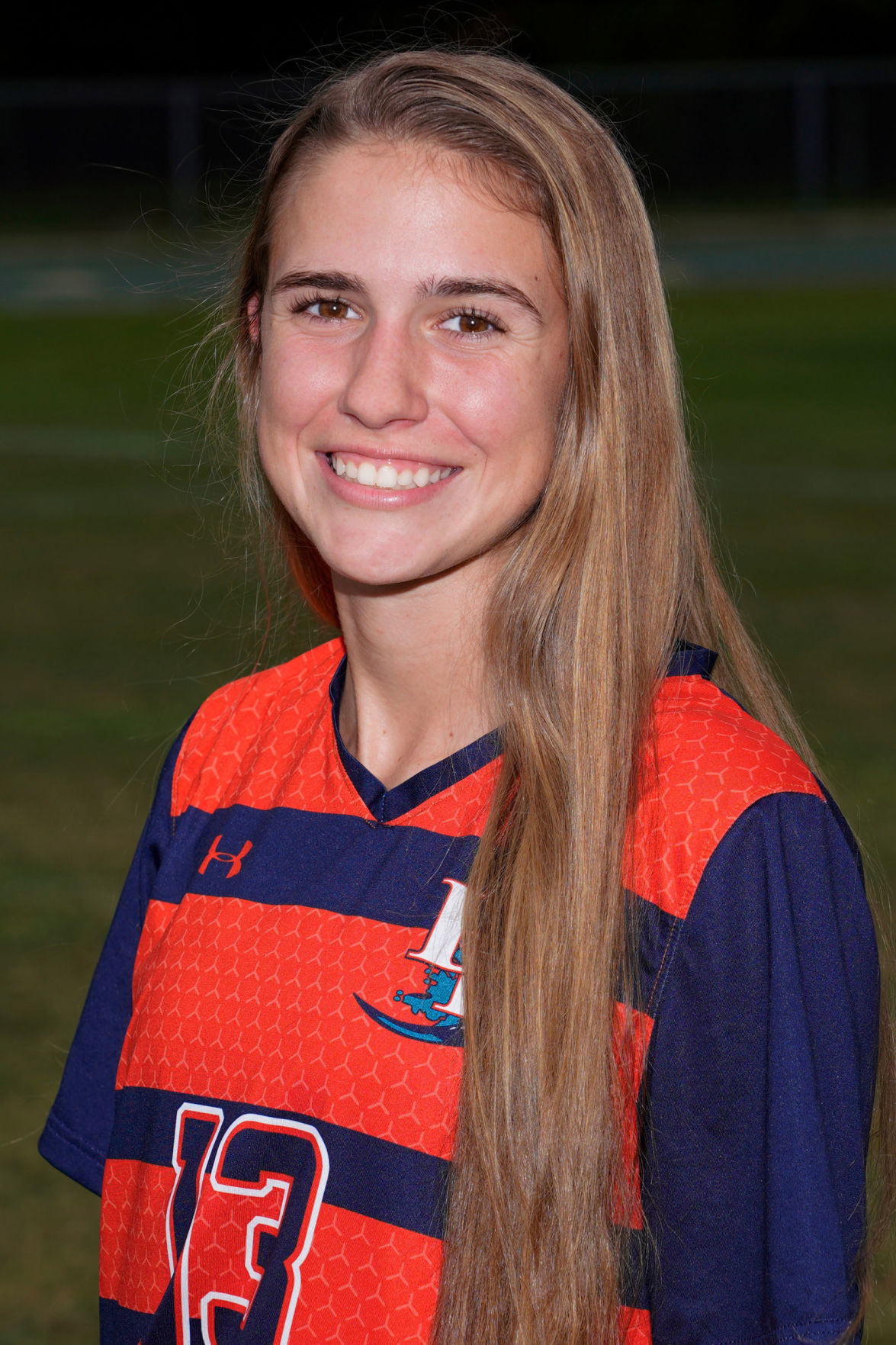 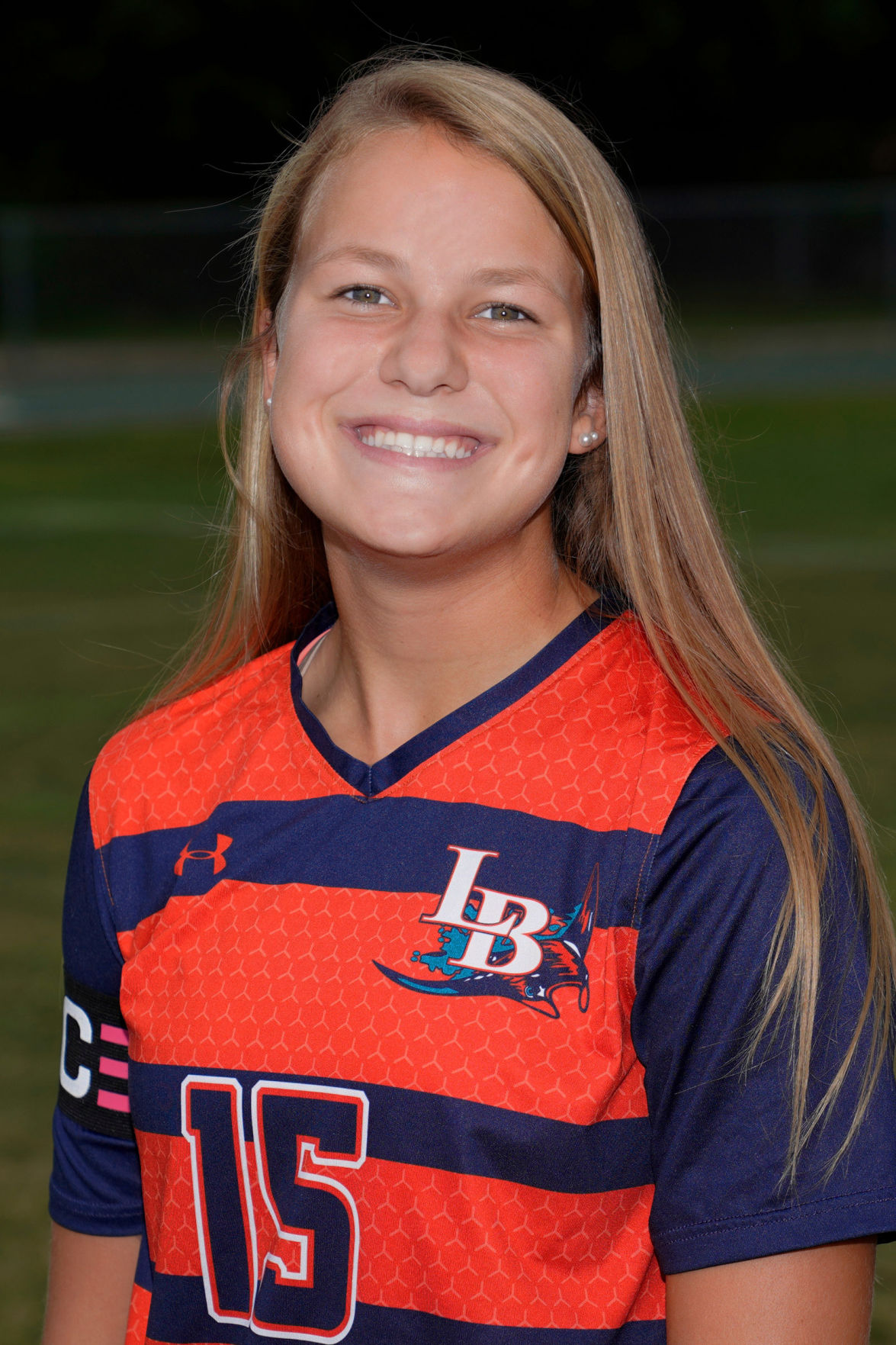 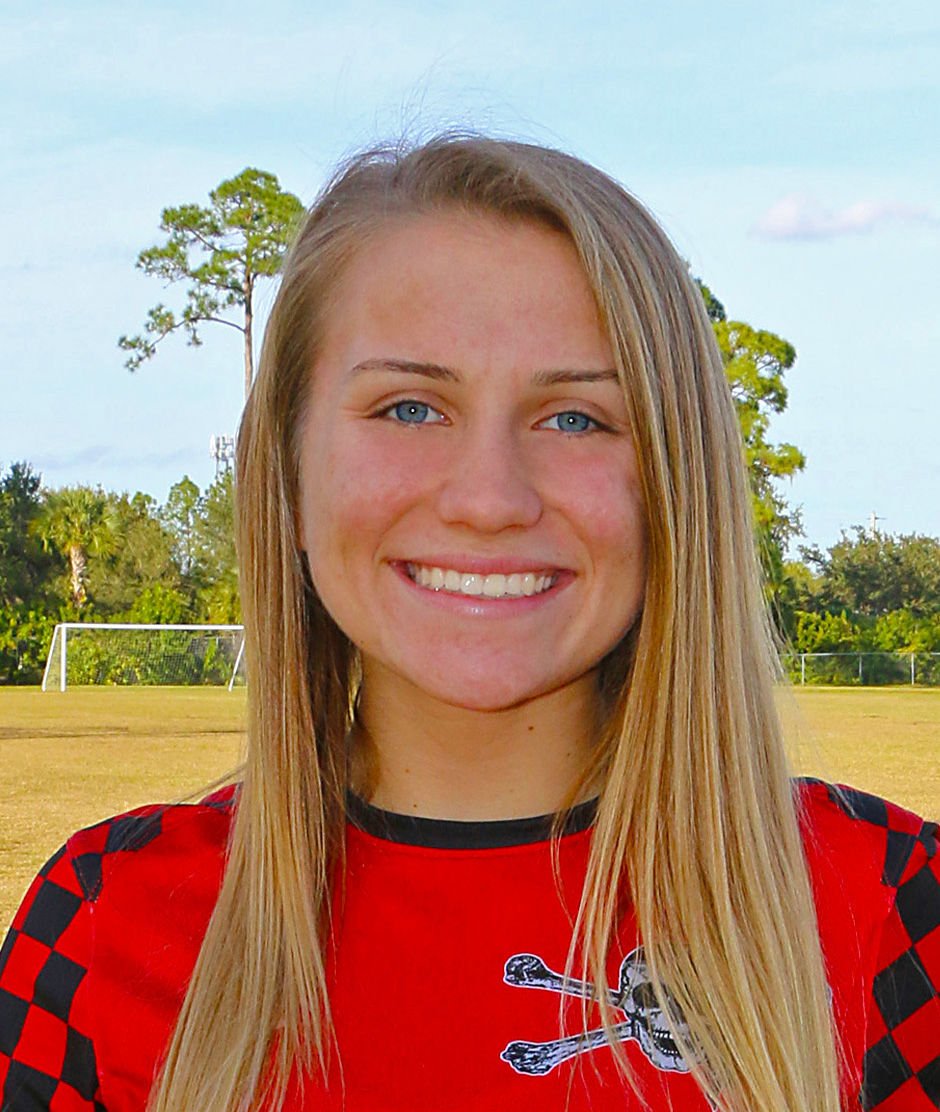 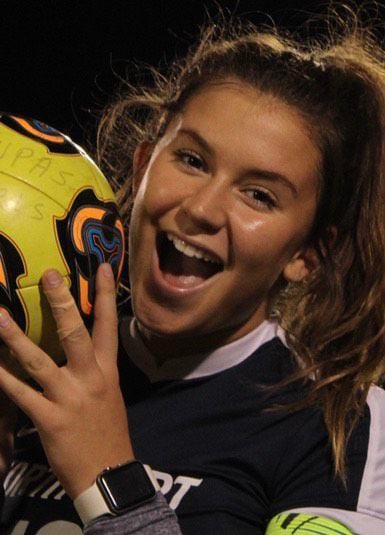 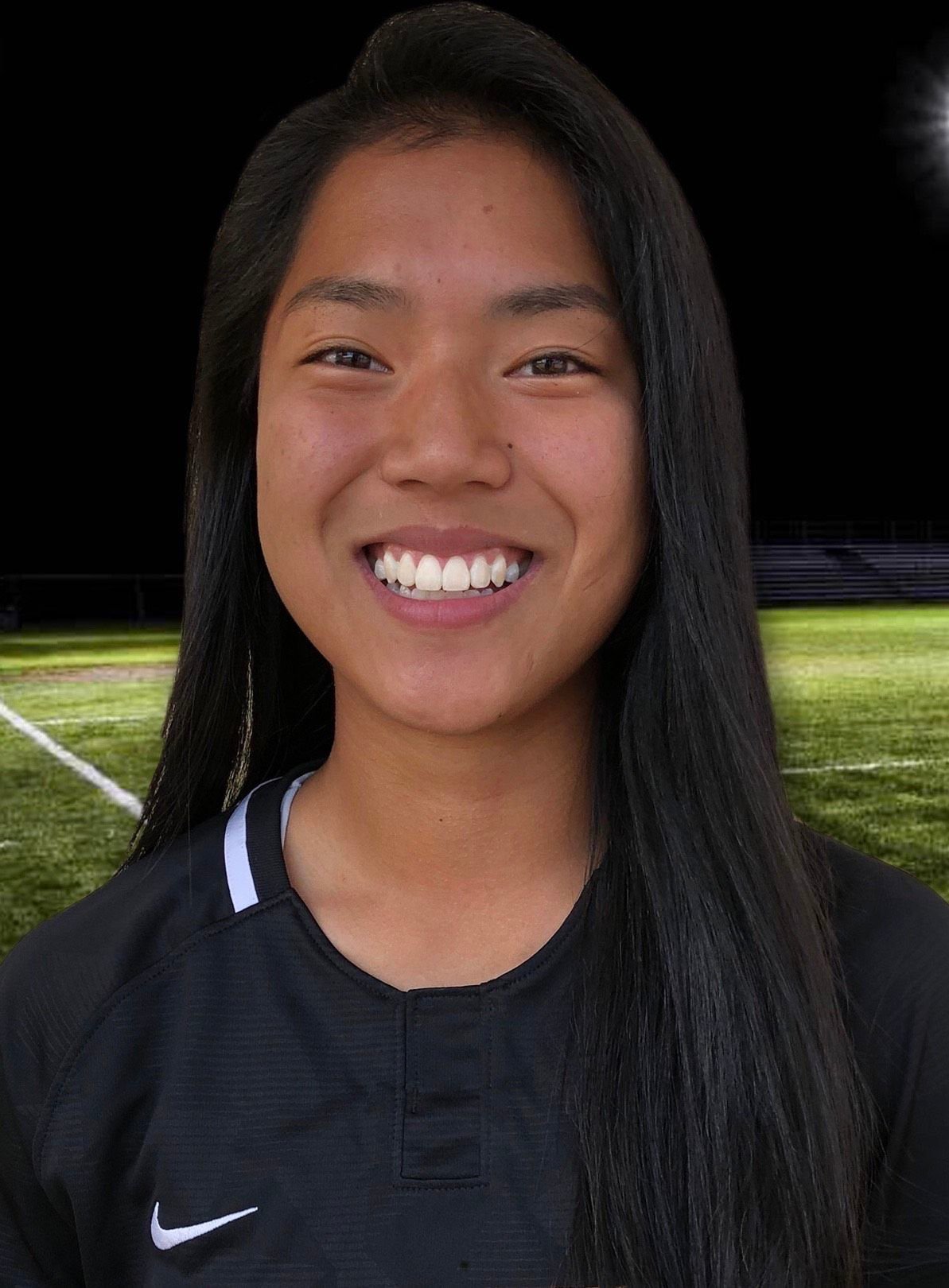 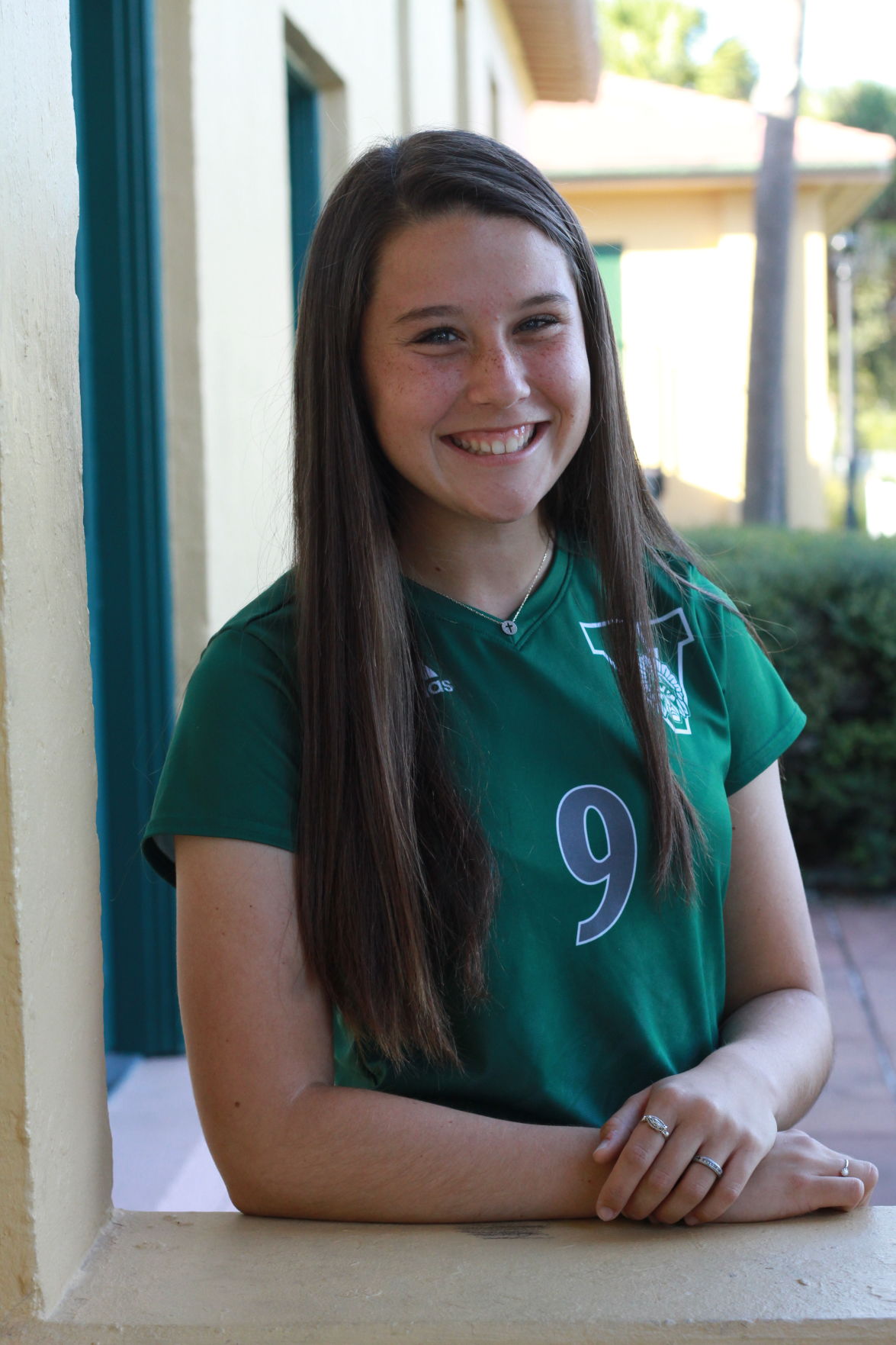 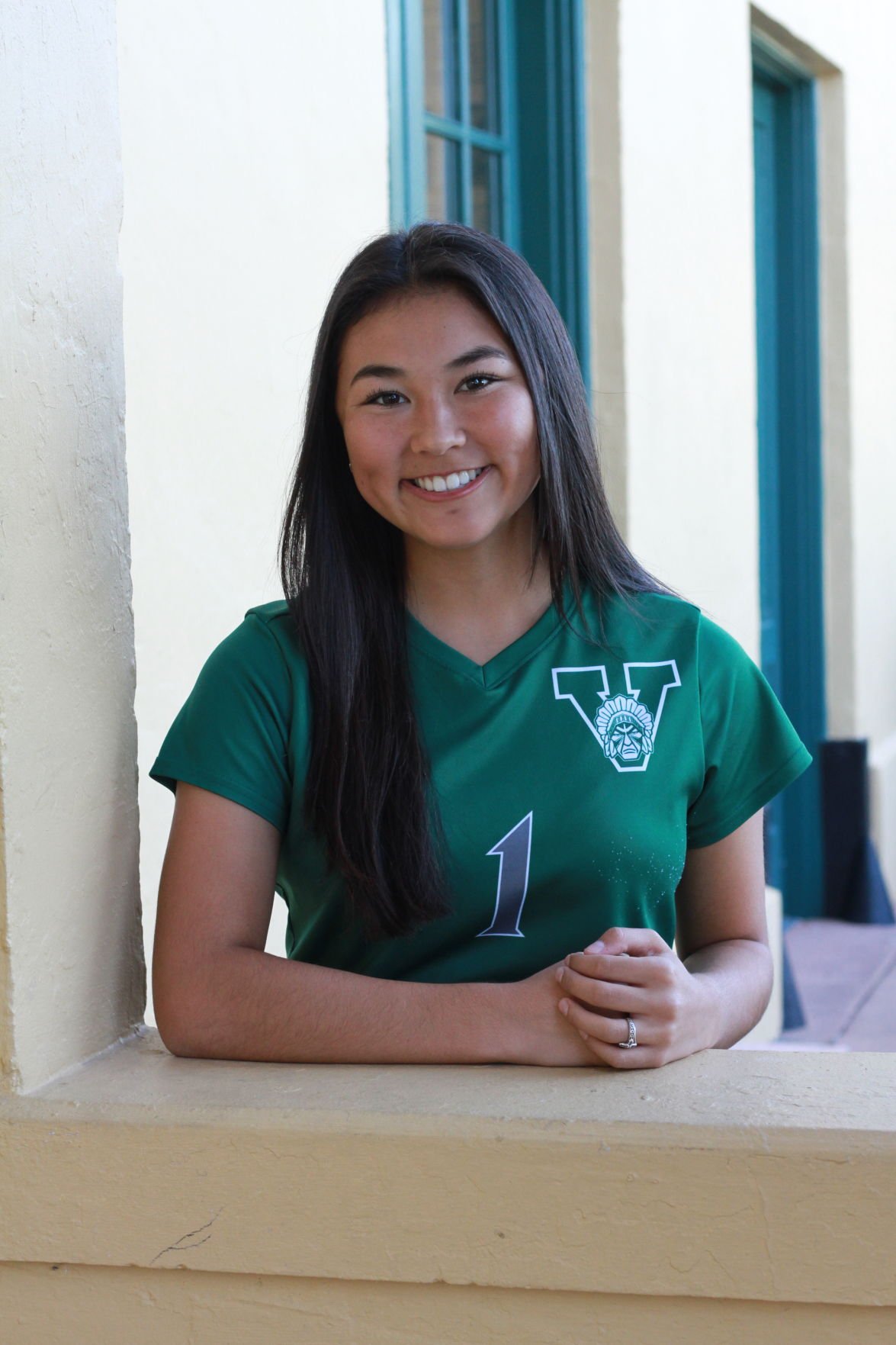 Mason Schilling had what coach Gary Bolyard called "one of the best season's he's ever seen" as she led Venice to the state championship game. 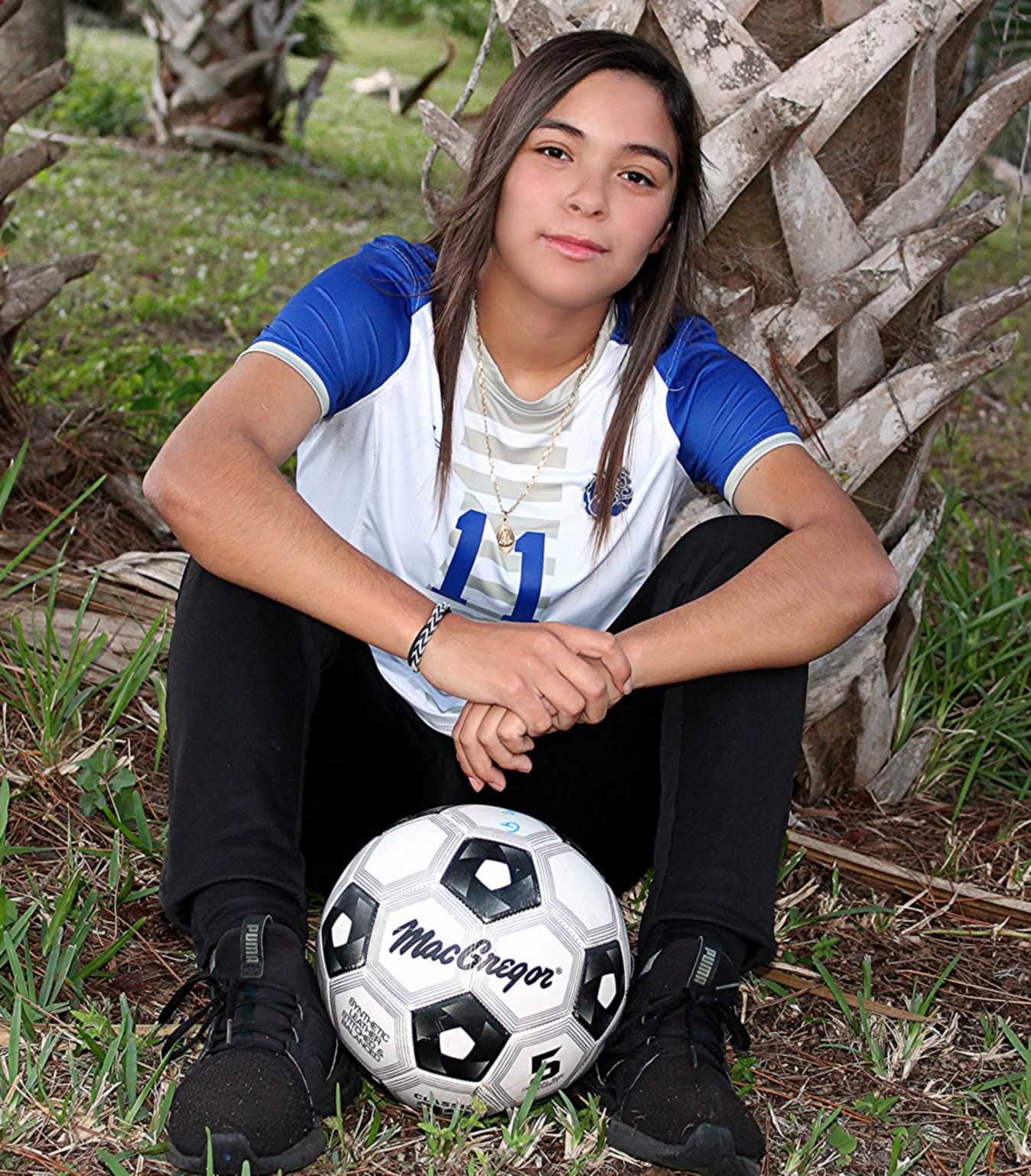 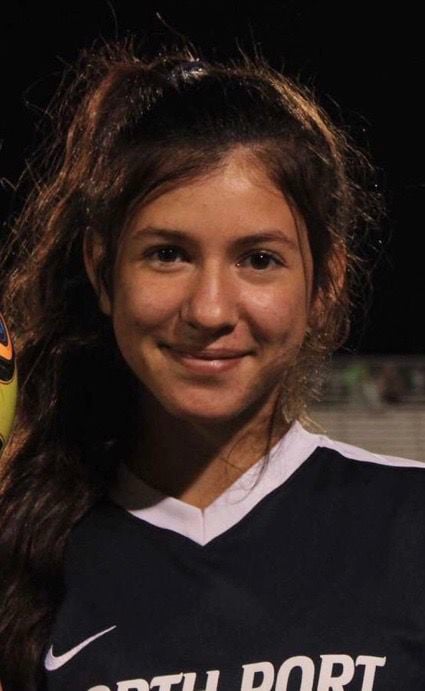 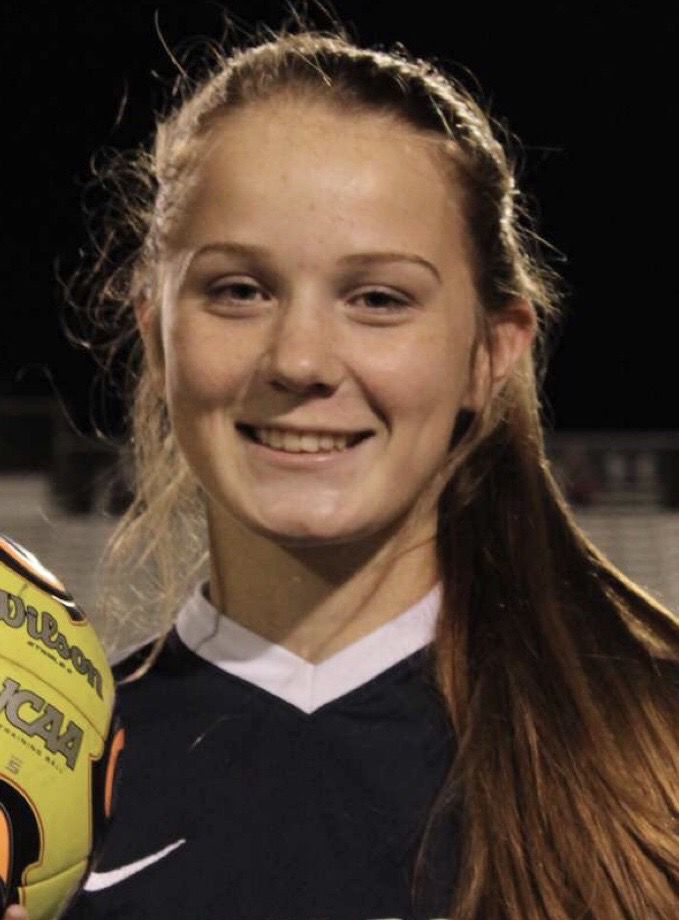 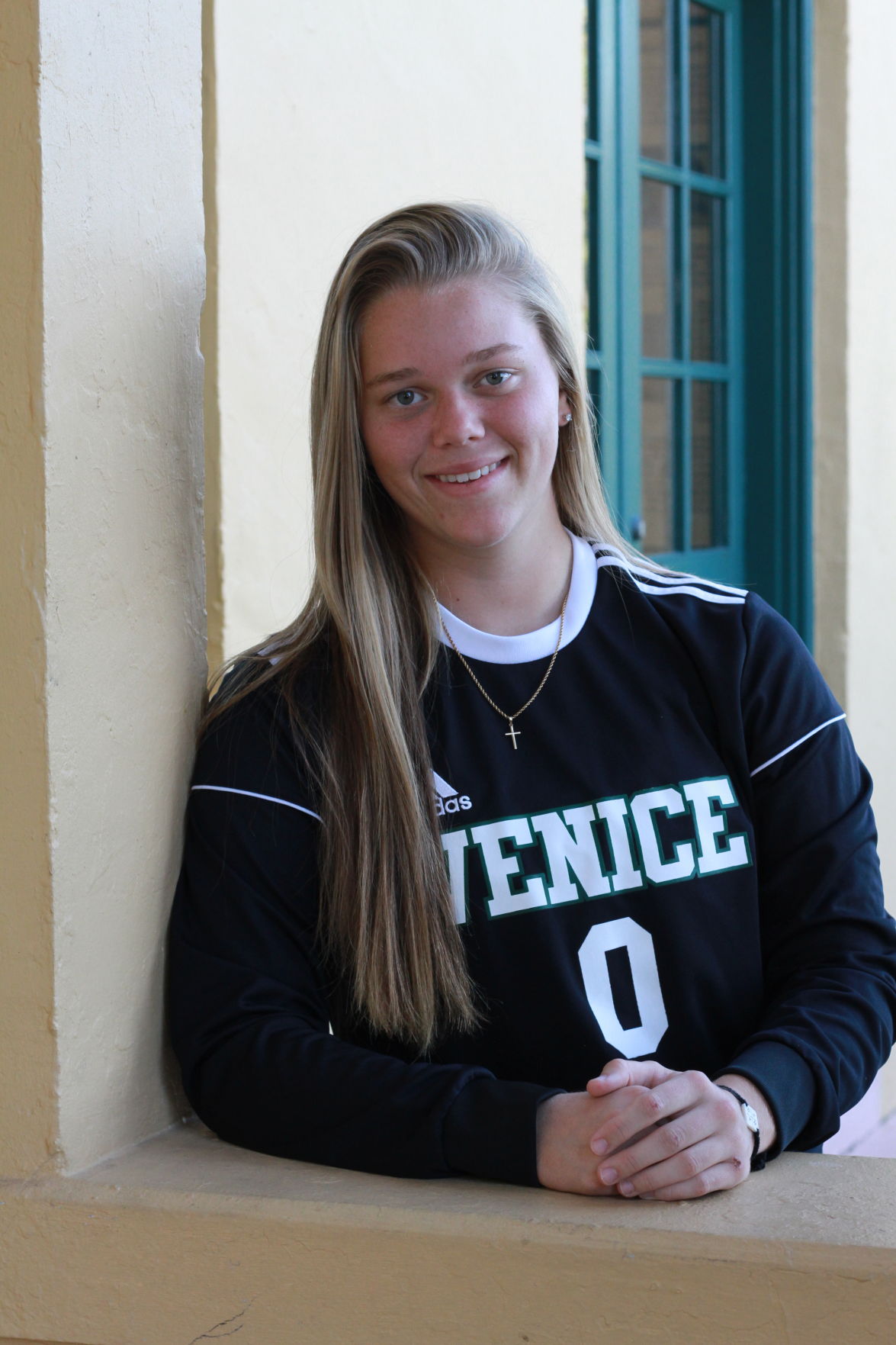 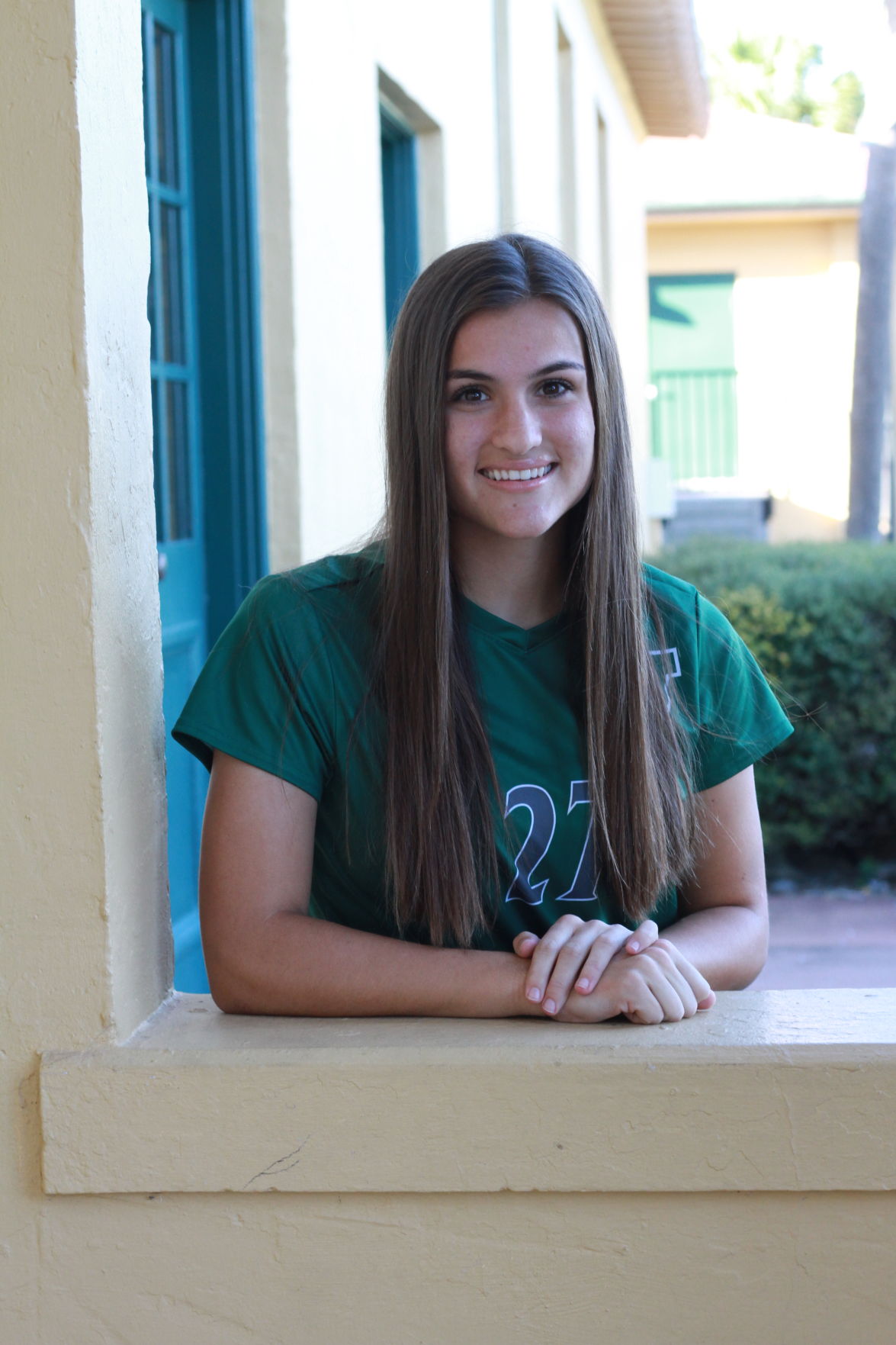 It was one of the better years for girls soccer in the area in recent memory. Three teams made it to regionals with Lemon Bay and Venice reaching the final four and state championship respectively.

That was mostly due to the electric offenses. The forwards that made first team all-area combined for 150 goals on the year with three of them breaking school scoring records.

Vying for her second straight Player of the Year award, Ragazzone wanted to break her own single-season record of 30 goals. She obliterated it, leading the area with 42 goals and helping the Lady Mantas to the Final Four.

“Watching Lolo play soccer is like poetry in motion,” Lemon Bay coach Katie Cooke said. “She reads the play well and comes up big when we need her too. Lo has a knack for finding the back of the net and she does it in exhilarating fashion. Her passion for the game is second to none and you know it as soon as she steps on to the pitch.”

Schilling not only led Venice in scoring with 21 goals, but also had the team’s third-most assists (12), was a team captain and scored several crucial goals including the only goal in the regional championship.

“She’s such a dynamic player,” Venice coach Gary Bolyard said. “Her ferocity is unbelievable. She demands greatness out of herself and her teammates and she was like that all year, non-stop.”

Purvis has been one of the top forwards for the past two seasons and had a record-breaking season. She broke the school record for single-season goals (33) and points (64) as well as career goals (52) and points (117).

“Aleena exemplifies commitment and dedication to the team,” North Port coach Hans Duque said. “She would play any position at any given time and still perform at the top.”

Melo was right on Ragazzone’s heels for much of the season, tallying a career-high 36 goals on the year. She completed Lemon Bay’s 1-2 punch, which combined for the most goals by a duo in Lemon Bay history.

“Zoe is a dynamic player and fun to watch,” Cooke said. “When she gets the ball something exciting is going to happen. She understands the game in a way many players don’t, this is something that you can’t teach.”

Jordan didn’t have her best statistical season, but she remained the on-field leader for the Lady Indians during their run to the state final. She scored 17 goals and assisted on 14 scores while leading by example on and off the field.

“Kat is a field general out there, directing traffic,” Bolyard said. “She just sees everything that’s going on and reads the whole game. Her soccer IQ is off the charts.”

It was difficult for Slattery to score as much as she did last year, with Venice facing one of the toughest schedules in the state, Bolyard said. However, the junior still tallied 12 goals, including the team’s only goals in the state semifinals and state final, along with seven assists.

“She created a lot of space in our offensive end,” Bolyard said. “Her stats weren’t where they have been, but her activity created space for other players. Her awareness was very good.”

Purvis and Spirk set the tone offensively, but it’s Idoyoga who facilitates and puts another element of pressure on opposing defenses. She recorded 17 assists, which is the school record and has the program record for career assists with 26.

“Emily brought us the leadership necessary to hold and push our team forward,” Duque said.

Ferjiani was a key member of the stingy Lemon Bay defense and made countless stops throughout the year. Most notably was her last-second save against Mariner to seal the first district title since 2005.

“Izzy played every minute of every single game this season,” Cooke said. “She was the leader of a defense that only allowed 24 goals all seasons long.”

With so many players able to score the ball at any time, Dalton played the role of distributor this year — assisting on 14 goals and scoring six of her own. During the playoffs, she upped her game and became a physical and aggressive player who helped Venice control possession of the ball.

“She really came into her own, especially during the playoffs,” Bolyard said. “She’s been in the shadow of Kat, but she gained a lot confidence and you could see that grow in her as the year went. As the playoffs came, she was a very big factor for us.”

Holding down the defense for North Port, which only allowed 1.4 goals per match. Her aggressive nature allowed her to chase down attackers and help the Lady Bobcats to the district title game and regional quarterfinals.

“Katelynn is perhaps the fastest, most aggressive athlete at North Port High School,” Duque said. “Stats do not do justice for all she does during the season.”

Several players were challenged by Venice’s schedule this year, but probably none more so than Pennell. The junior goalkeeper faced some of the best strikers in the state and allowed just 21 goals all season while saving 65 shots on goal. In the playoffs, she let in less than one goal per game.

“Of course we stepped up our schedule,” Bolyard said. “We played a lot of tough teams and she faced a lot of good forwards and she kept us in a lot of games with some big saves.”

Gary Bolyard, Coach of the Year

Coaching in his 10th season for Venice, Bolyard got his team to the state finals while playing the toughest schedule in the state. The Lady Indians went 15-4-2 and produced three collegiate signees this year.

Not to be forgotten is Cislo, who scored 20 goals herself as the third option in a dynamic offense that produced 5.7 goals per match. She scored two game winners on the year as a senior.

Porto led the team in goals with 14 goals and 7 assists on the year for the Lady Pirates, who went 9-7-1 on the year and averaged just shy of three goals per game.

It was quite the breakout season for Spirk, who was second on the team with 25 goals and 12 assists as a freshman (both freshman records). She scored a hat trick to help the Lady Bobcats advance to the district final.

As the glue of the offense, Cherniak was the one getting the big three the ball. She tied for the lead in assists with 21 and scored 12 goals including two game winners.

The Porto twins were the energizers on offense. Emily led the team with 19 assists, setting up her sister for many of her goals and also scored 5 goals herself this season.

Knight waited for the right time to score her first goal of the season. It came in a tie game in the district semifinals, booting a shot to the top-right corner off a set piece for the go-ahead goal. She was their primary man marker and shut down some of the best forwards in our region.

In her first full season at the varsity level, Ayette proved she could handle herself against older competition. She displayed a fierce tenacity on the field that revealed itself in the very first game when she split her head open going for a header and hardly flinched. Ayette and the rest of the Venice defense allowed goals in just three of seven playoff games.

Vickery played in 17 games this season and was a work horse defensively. She was able to knock in two goals for the Tarpons this season.

The Lady Mantas only allowed 24 goals all year and Mason was a key reason why. She had 70 saves on the year with 12 shutouts and only allowed 16 goals. She helped make the game-winning stop against Mariner in the district championship.