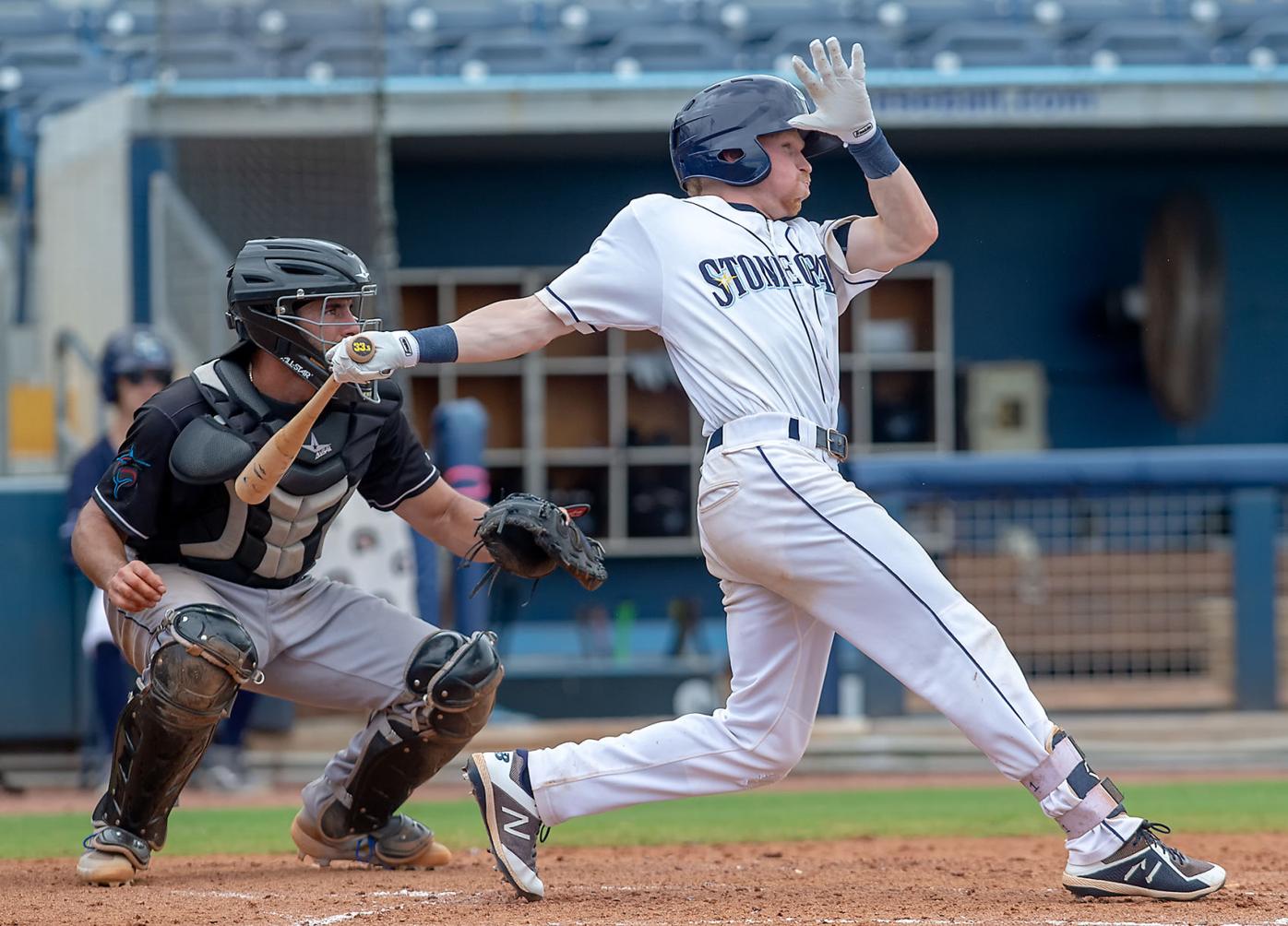 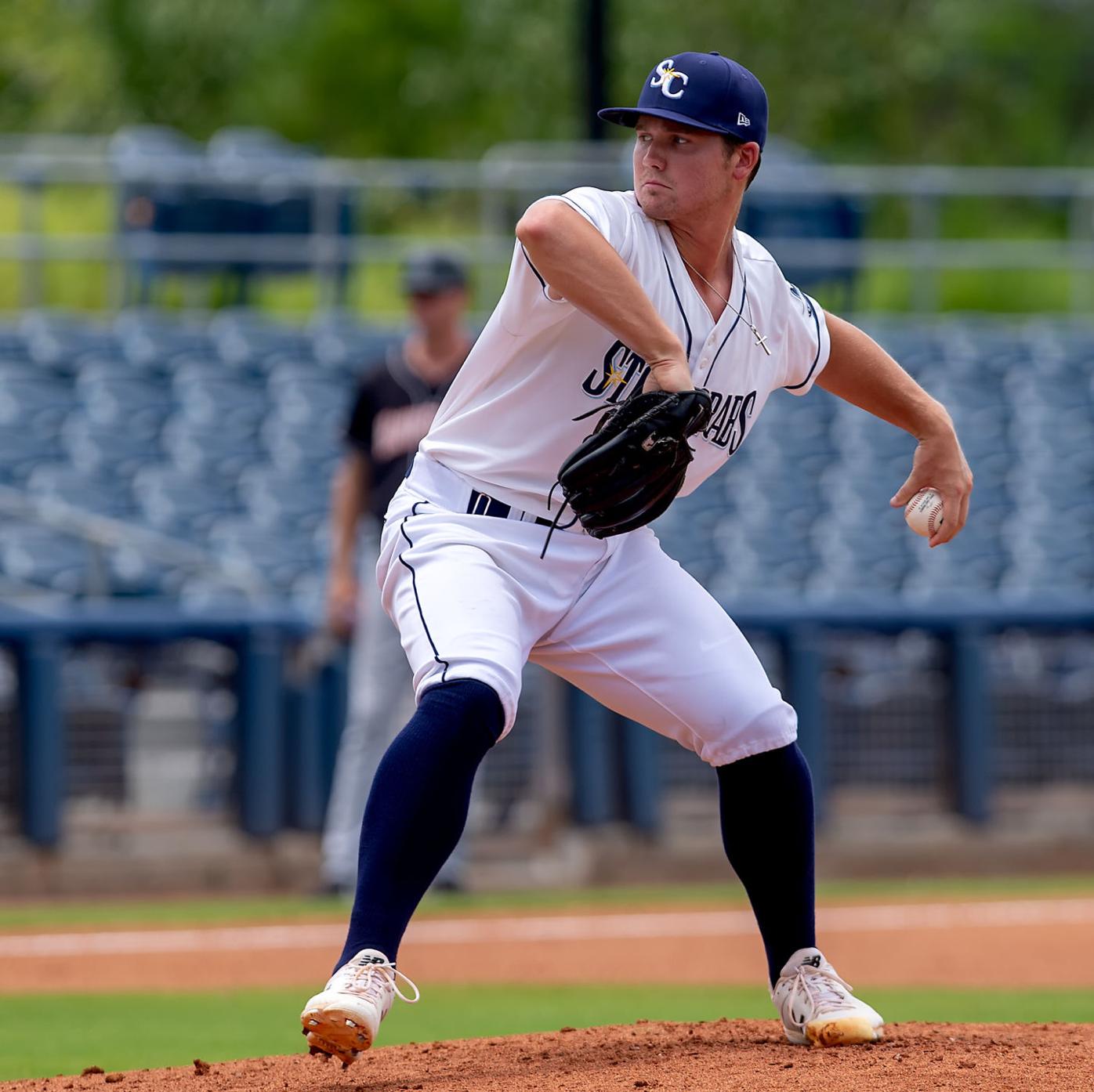 Charlotte Stone Crabs pitcher Troy Cumbie strikes out a Jupiter batter to end the fifth inning leaving the bases loaded during the second game of the July 24 doubleheader at Charlotte Sports Park. Cumbie has a 1.06 ERA as of August 2.

Charlotte Stone Crabs pitcher Troy Cumbie strikes out a Jupiter batter to end the fifth inning leaving the bases loaded during the second game of the July 24 doubleheader at Charlotte Sports Park. Cumbie has a 1.06 ERA as of August 2.

Texas is the second biggest state by size and population but it feels a little smaller for Charlotte Stone Crabs outfielder Michael Smith and pitcher Trey Cumbie, who played together in East Texas on a travel ball team and are finding success in the minors together.

Both players have been posting big numbers since being promoted from Bowling Green. Smith is batting .316 with a .839 OPS and Cumbie’s ERA with the club is a miniscule 1.06 with hitters batting .167 against him.

They have had some help getting to this point. On their travel team, one of their teammates was Cody Clemens, the son of Roger Clemens.

“He would gives us a few pointers here and there,” said Cumbie of the pitcher who he grew up admiring and who retired with 4,672 strikeouts.

Cumbie and Smith said Clemens’ competitive spirit came across to the team.

“He got on to us when we were slacking,” Smith said. “It was all tough love.

“He’s able to pick apart hitters,” Smith said. “When I was struggling or doing good he would give me a tip.”

Cumbie has the look of a prototypical pitcher at 6-foot-2, with broad shoulders and a powerful build. At 5-foot-11, Smith has an athletic, agile build and can play all of the outfield positions. He also has speed, with 17 stolen bases this season.

Another Texan recently joined the team as well. On July 24, Connor Hollis made his debut by hitting a double and scoring a run. He played at the University of Houston with Cumbie. “It’s a lot of fun to be playing with these guys,” he said. Hollis went undrafted out of Houston but signed two weeks after the draft. He was signed for $1,000 and a plane ticket after being told he has a ‘chip and a chair.’

Hollis is a utility player who can play first, second and third base. He also has a knuckleball he can throw if the bullpen gets in a pinch.

The July 24 game was sort of a showcase for the Texans as Smith hit a home run and drove in four runs. Cumbie pitched three innings of one-run ball for the win.

“His stuff is really good,” said pitching coach Steve ‘Doc’ Watson of Cumbie. Watson said he was impressed that Cumbie was able to get out of a couple jams, including a strikeout with the bases loaded in the 5th and another strikeout to end the game with a man on third. Cumbie would have got out of the inning unscathed if not for a moonshot popup that dropped in the outfield after being lost in the sun.

“When you have quality pitches, you’re just a strike away from getting out of it,” Watson said.

“I struggled a little bit with command,” Cumbie said after the game. After giving up a double and two walks in the fifth inning he was able to adjust and settle down in the sixth, striking out one while retiring all three batters. “Just staying on my back leg longer,” he said.

Cumbie had not allowed a run in his first six games with Charlotte. On July 20, he threw 2 2/3 innings of shutout ball until he was taken out and a run scored from third on a flare.

Cumbie was a starter at Houston, where the team made it to two regionals. The Rays drafted him last year in the 13th round and have been utilizing him primarily out of the bullpen. He sports a 92-94 MPH fastball, a curveball and changeup.

He posted big-time strikeout numbers with Bowling Green this season, whiffing 50 batters in 32 1/3 innings with a 3.06 ERA. While his strikeout rate has dropped in Charlotte (14 strikeouts in 17 innings), hitters are having a much tougher time squaring up on him. He has a 0.82 WHIP with Charlotte compared to a 1.42 WHIP at Bowling Green.

Cumbie thinks it is helping him by being stretched to go a little farther in games with the Stone Crabs. “They have been extending me out of the pen, throwing two or three innings instead of one or two at Bowling Green.

“I get better as the game goes on.”

As a southpaw, he thinks the “different angle, being able to spin the ball well from the left side is a big advantage.”

Two of the lefties he likes watching are Dodgers’ ace Clayton Kershaw and Texas Rangers’ Mike Minor, who are both known for their big curveballs.

Cumbie thinks his curveball has improved this year. “It’s better for sure. This season I’ve been getting behind the ball better and getting more true spin on the ball.”

While Cumbie went to a Division-I school, Smith initially went to Kansas State but transferred to San Jacinto College North, which finished second in the 2017 Junior College World Series to Chipola.

“I found another love for the game,” he said of his junior college experience.

“I tell everyone that the best decision I ever made was going to junior college.”

The pitching coach was Woody Williams, who played 15 years in the big leagues, where he won a World Series with the Blue Jays and was an All-Star with the Cardinals. While Smith didn’t pitch in junior college, he said Williams gave him advice.

“He made me take a step back and made me realize where I was and helped me grow.”

Smith has a simple approach to hitting: “Letting the ball come to me. Not trying to do too much,” he said. “Anytime I’m up there with guys on, I’m just trying to see a strike and get some barrel on it.”

Smith was drafted in the 18th round of the 2017 draft. He has shown he is a solid line-drive hitter who has turned it up since arriving in Charlotte.

“The pitchers are a lot more around the zone,” he said.

His home run and double in the July 24 game were both scorching liners.

Smith is also a lefty when it comes to hitting and throwing, though he shoots right-handed in basketball. Smith said he tried to hit right-handed during a game at Cooperstown with the travel league. Their team was up by a lot so the coach had every hitter swing the opposite way.

What is going very well is his hitting with the Stone Crabs. With seven doubles in 26 games in Charlotte, he is showing that he can be a 30-doubles type of hitter.

“I know coming in here that the outfield here is pretty loaded and I know I had to put up big numbers.”

Smith and Cumbie are proud of their Texas roots. Another teammate, catcher Zacrey Law hails from Waco, Texas.