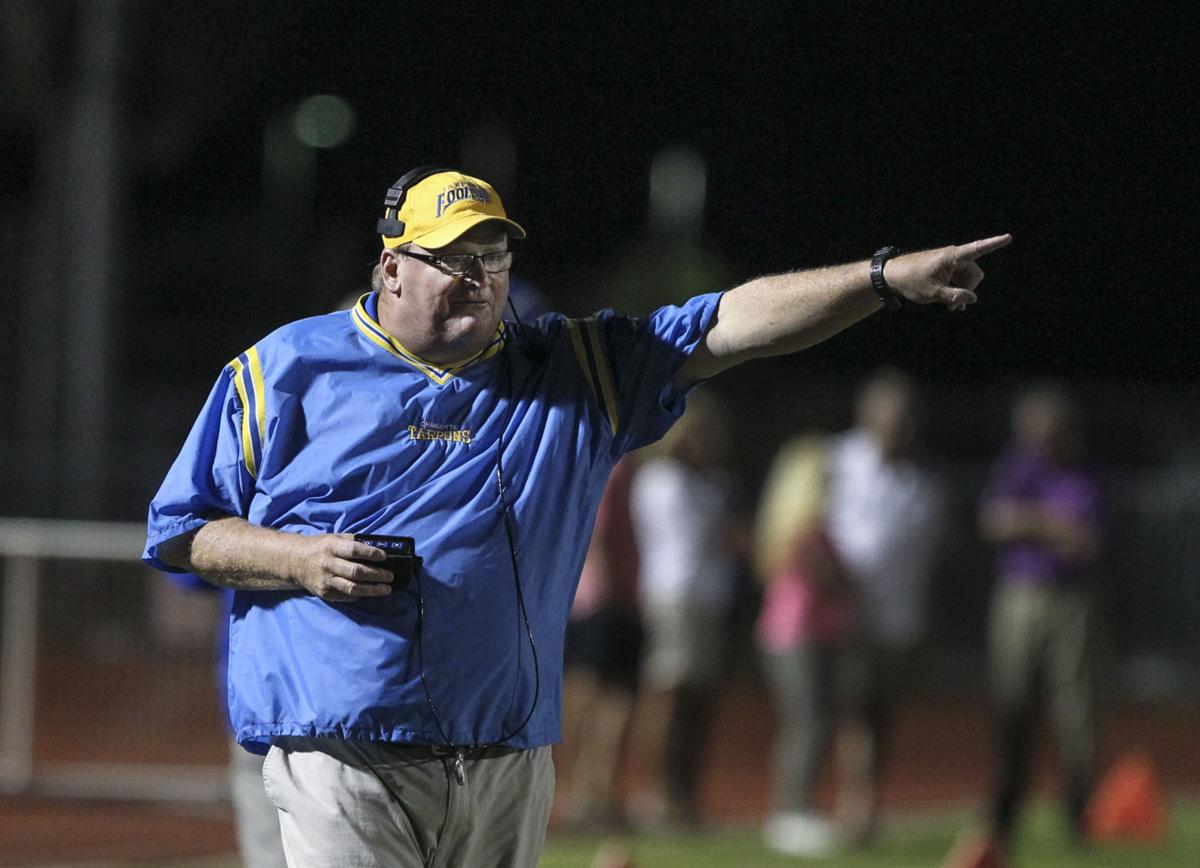 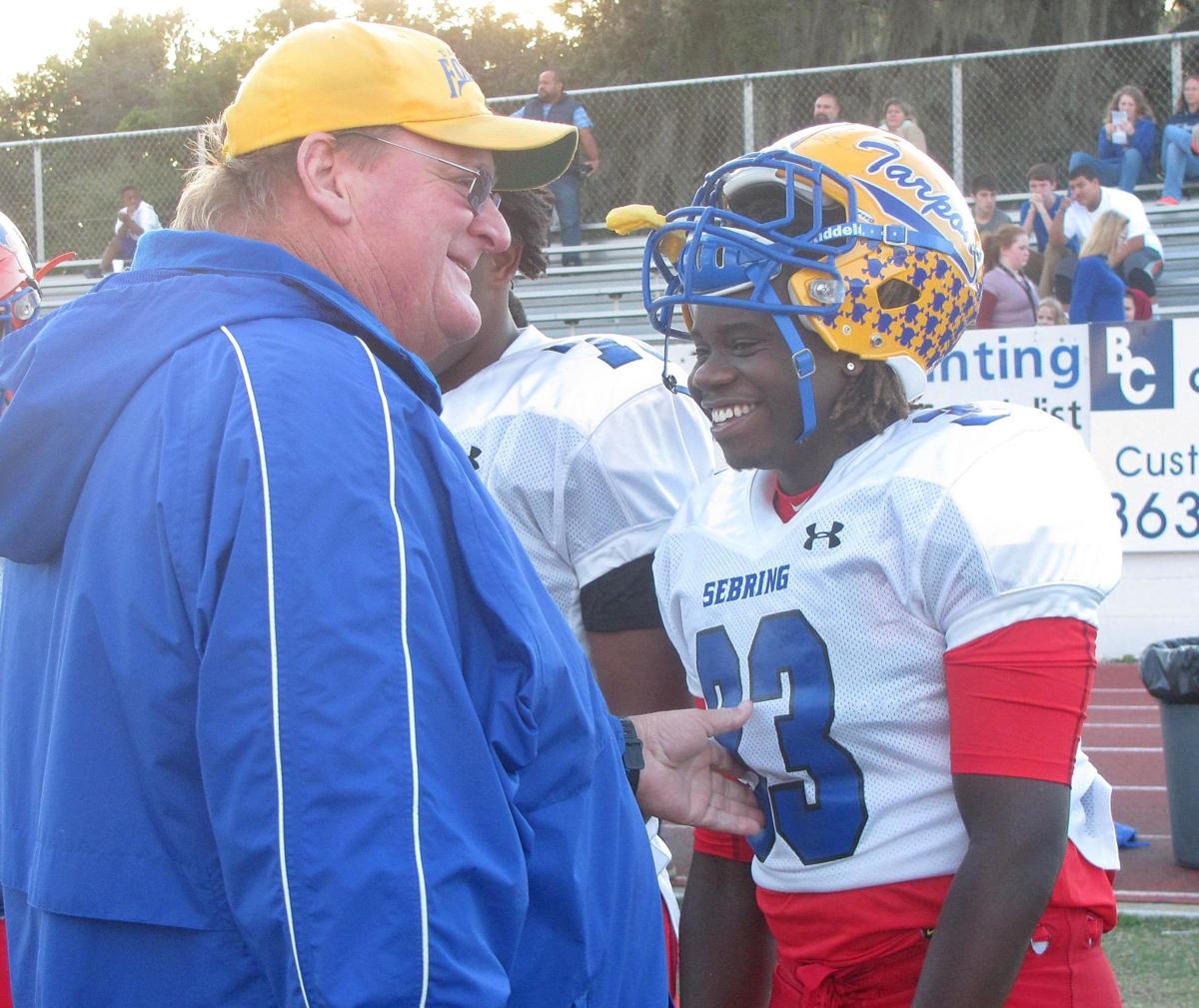 Charlotte Head Coach Binky Waldrop shares a laugh with Malik Gainer at the 2016 All Star game. 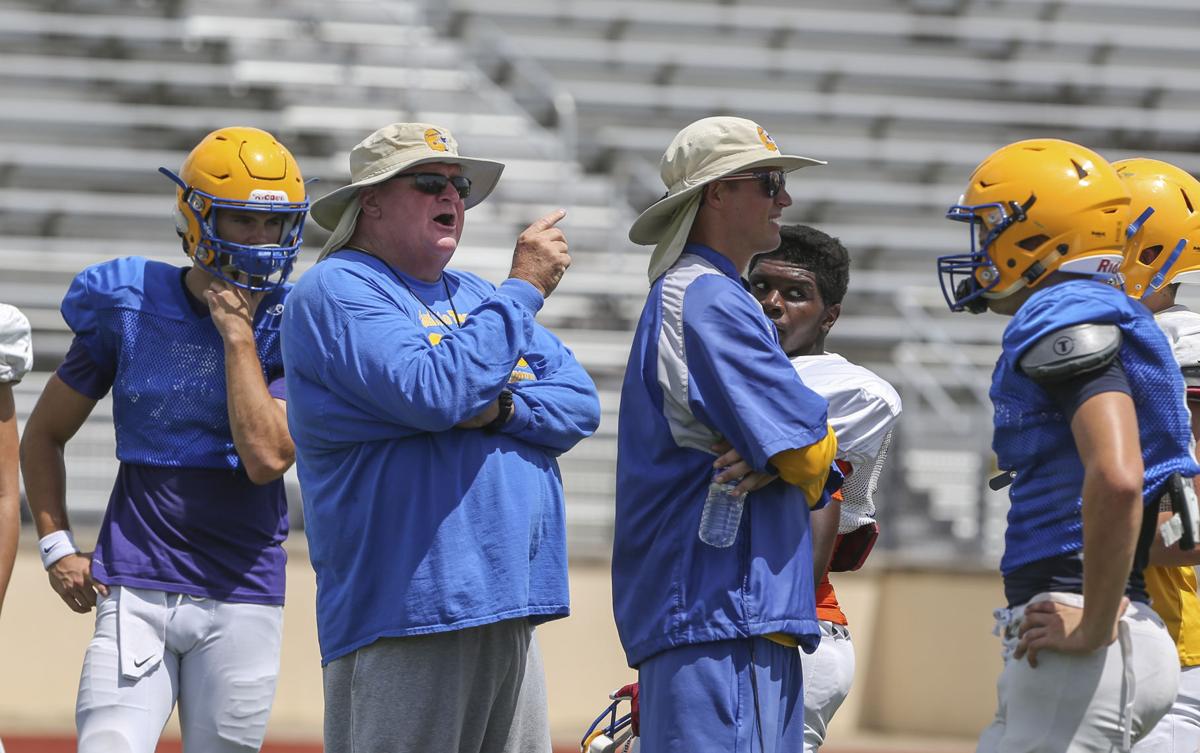 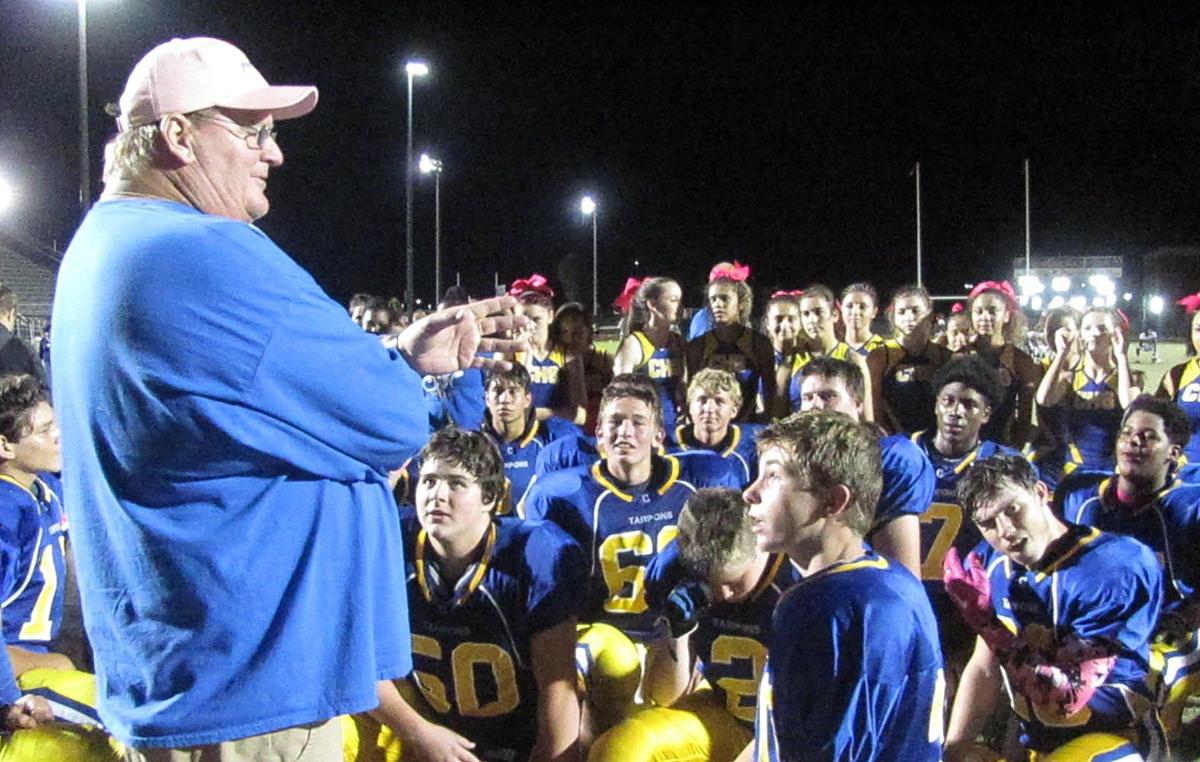 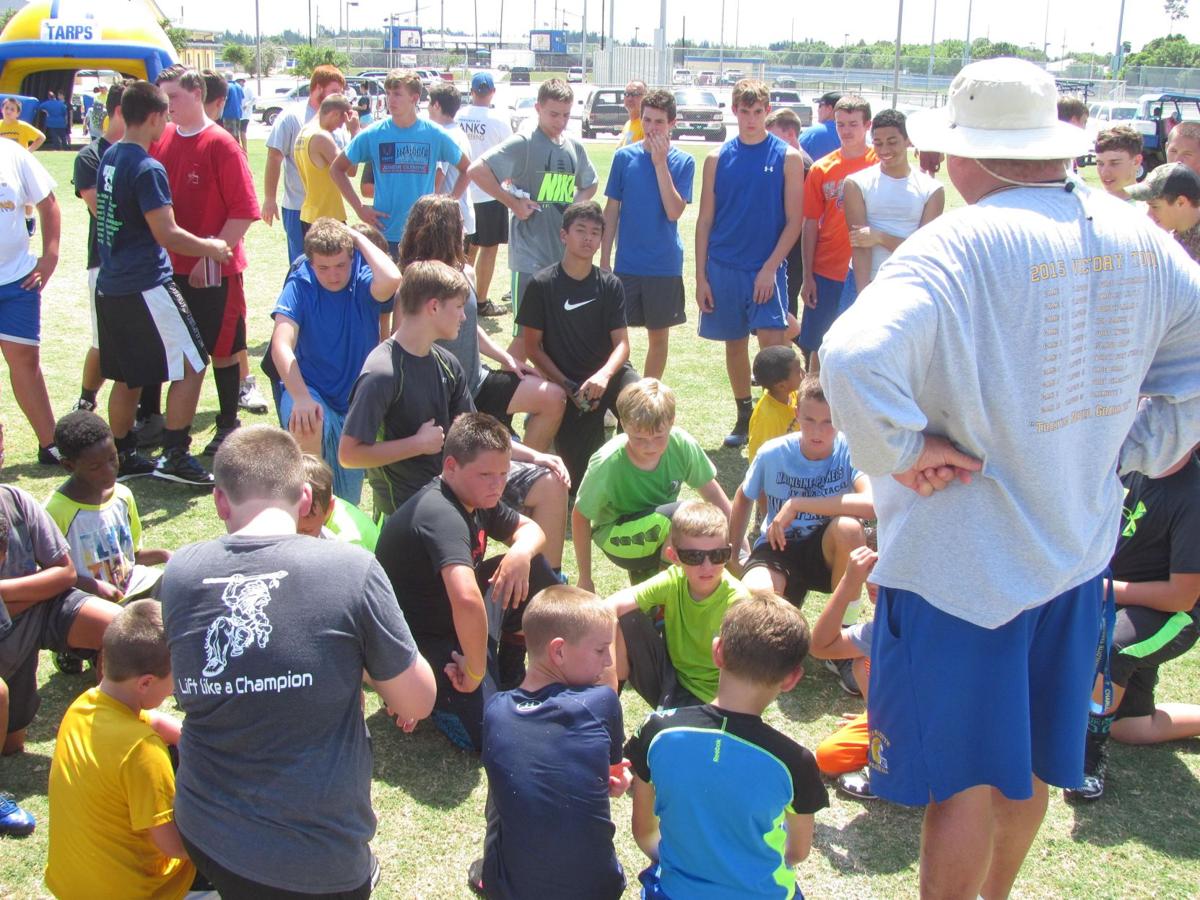 Tarpons Head Coach Binky Waldrop talks to the campers at the end of the football skills camp. 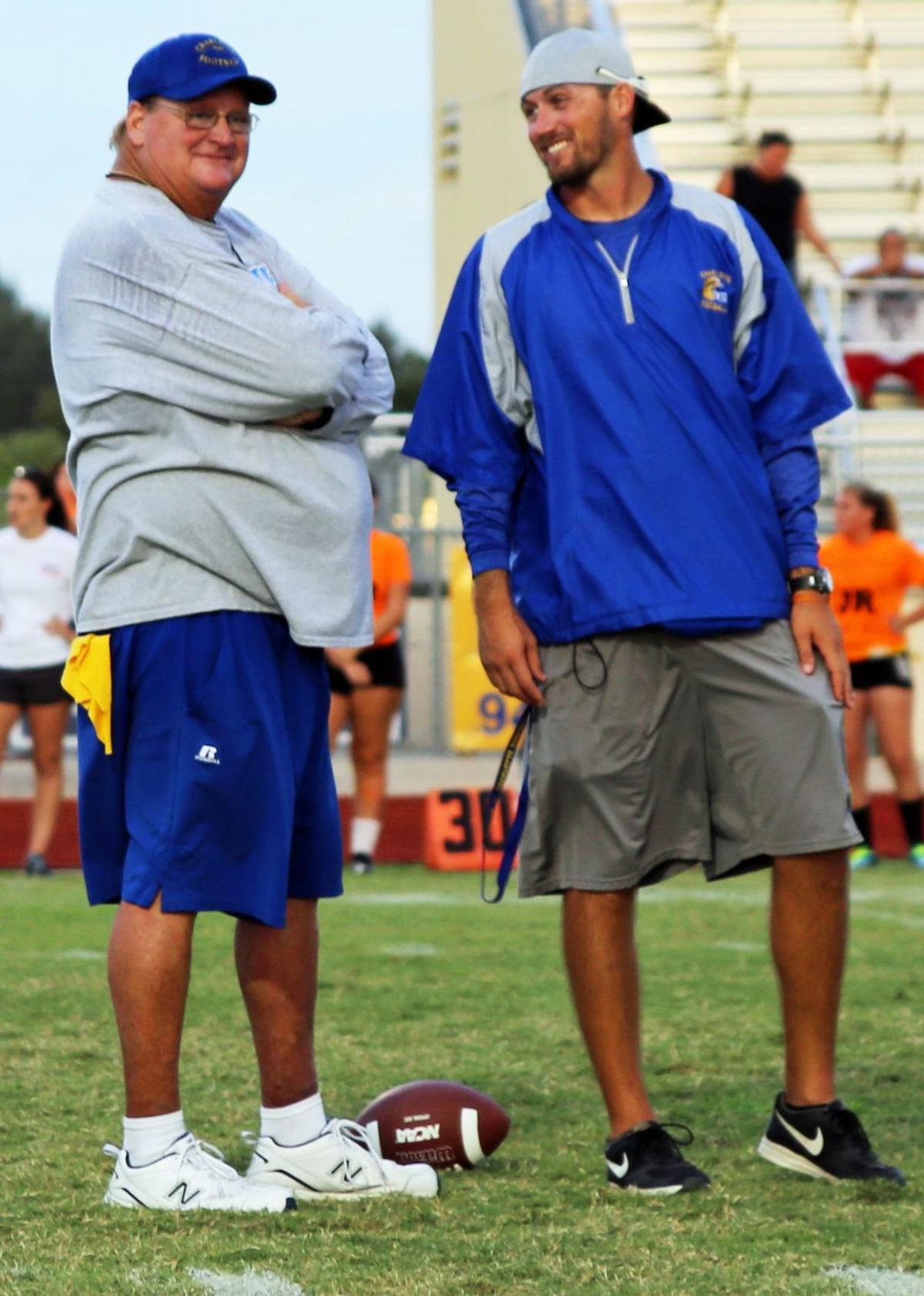 PHOTO BY BETSY WILLIAMS Charlotte High Coach Binky Waldrop and assistant coach Justin Midgett confer during a practice session recently. Midgett was the quarterback on the last Tarpons team to reach the state semifinals, in 2002..

Charlotte Head Coach Binky Waldrop shares a laugh with Malik Gainer at the 2016 All Star game.

Tarpons Head Coach Binky Waldrop talks to the campers at the end of the football skills camp.

PHOTO BY BETSY WILLIAMS Charlotte High Coach Binky Waldrop and assistant coach Justin Midgett confer during a practice session recently. Midgett was the quarterback on the last Tarpons team to reach the state semifinals, in 2002..

After 21 seasons at the helm of the Charlotte High football program, longtime Tarpon Binky Waldrop announced Thursday that he is stepping away from coaching.

After compiling a 168-72 record with 17 playoff appearances and nine district titles since he took over in 1999, the 55-year-old Waldrop said it’s time for him to call it a career, leaving behind a lasting legacy of sustained success.

It’s something he’s thought about here and there for the past five seasons, but never really discussed in depth with anyone.

But this year, he said a couple things lined up for him to finally make this decision. The program has a hefty group of returners, which should help ease the transition for whomever takes over. It’s also not a scheduling year, so that burden won’t be placed on his replacement.

In reality, Waldrop never thought he’d last as long as he did.

He was a member of the basketball, baseball and football teams, and as a coach, collected five regional championship appearances, winning two, and posting six seasons with 11 wins or more. All of that success made the sports aspect easier to leave behind.

He wouldn’t miss the late Friday nights after games, the countless weekend hours diving into film and daily practices in the Florida heat.

But the relationships he built with hundreds of current and former Tarpons are what made Thursday’s decision so challenging.

“First and foremost, all the kids that have played for me, they’re at the top of the list,” a teary-eyed Waldrop said. “I have the utmost respect for all of them. They always talk about what coaches teach kids, but there have been a lot of kids here that have taught me things. Most of them I’m still very close to. I’m very grateful for them.”

That feeling is reciprocated by his players, who were shocked to hear the news, but respect everything Waldrop has added to their lives on and off the field.

“It’s crazy honestly,” senior Jeremiah Harvey said. “You have to look at everything he did for Charlotte the past 21 years. He’s like a father to everybody. He’s gonna be there, if you call him he’ll always answer. He’ll talk to you about anything you wanna talk to him about. He has led us in the right direction, not only on the field, but in life.”

You don’t get to coach football for 21-plus seasons without learning how to adapt.

Along with longtime assistants Tom Mut and Larry Marsh, who have been by Waldrop’s side throughout his career, he has dealt with the emergence of cell phones in the locker room and changes in the game due to safety concerns, among other things. Much of it he didn’t know how to react to, but adjusted his coaching style accordingly across two decades.

“He’s not only the head coach, he’s my very good friend,” Nolan said. “I understand the difficulties of this decision. We as a school and community are gonna miss Bink, but we’re gonna celebrate him. If you had to come up with a 22-member dream team ... Binky probably coached 18 of them.

“He takes care of his kids. They see the big rough exterior, but they don’t see the interior. He cares about each and every one in this school.”

Nolan said the search for Waldrop’s replacement won’t be easy, but they will most likely have their candidate selected within the next 2-4 weeks as spring football approaches.

“We’re gonna have someone in place quickly,” Nolan said. “Somebody that’s gonna carry on tradition. It’s a hard act to follow, so somebody’s gotta have thick skin and understand that they’re gonna have to find their own identity. We want to make sure we continue that tradition of excellence on the field, in the classroom and in the community.”

Waldrop will remain at the school in his normal capacity as a P.E. teacher. Though he will no longer be a staple on the sidelines on Friday nights, he now joins a coveted fraternity that he’s helped build as both a player and a coach with Charlotte High.

“We’re the largest fraternity in Charlotte County,” Waldrop said. “I’m at the age now where I’m starting to coach their kids. It’s been a great run and I’m blessed. This football program has done a lot for me. There’s no better place to be in the world than right here. That’s the way I look at it.”