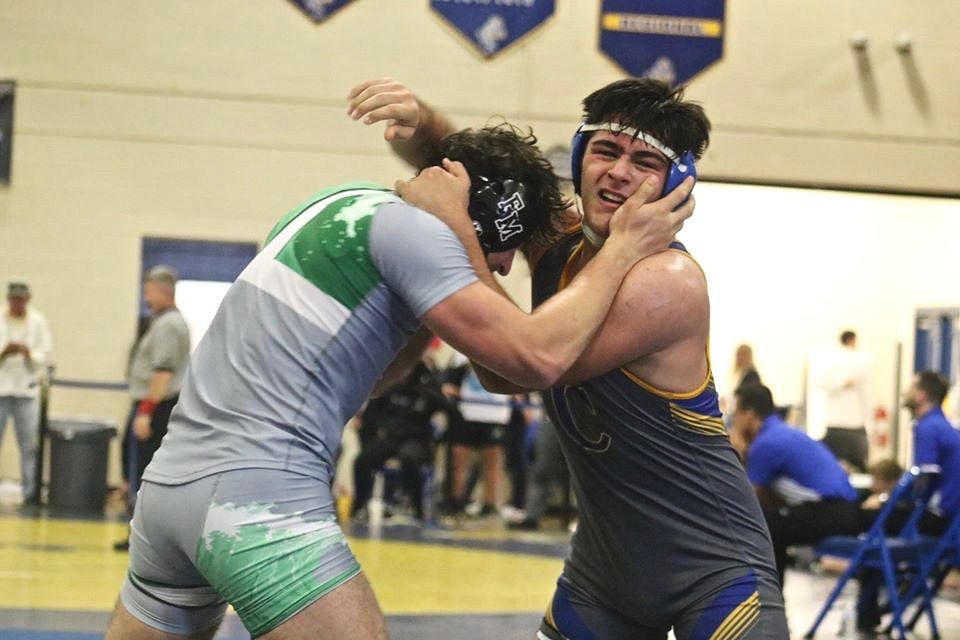 Charlotte’s Biaggio Fratterelli, right, was a breakout athlete on both the football and wrestling teams, winning the district championship at 220 pounds. 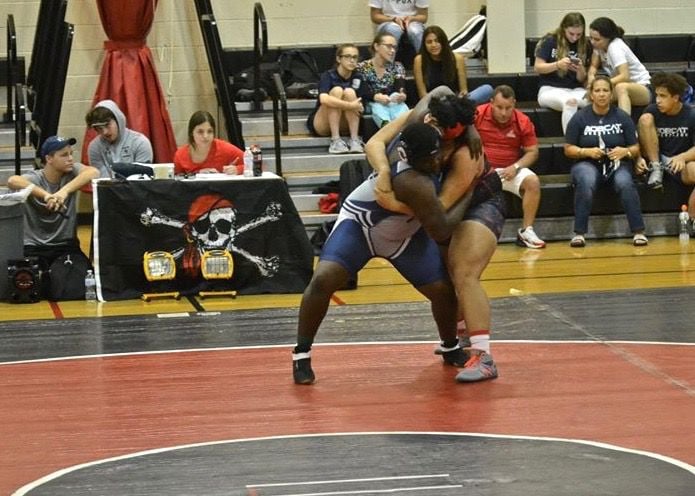 Charlotte’s Biaggio Fratterelli, right, was a breakout athlete on both the football and wrestling teams, winning the district championship at 220 pounds.

Before Tristan Wirfs was selected with the 13th pick in this years draft, he dropped 30 pounds while wrestling and became the Iowa state heavyweight champ.

Now, he’s protecting a six-time Super Bowl champion in Tom Brady. In fact, four of the six offensive lineman drafted in the first round of the 2020 draft were state champion wrestlers.

The two sports seem to go hand in hand, especially for those battling in the trenches. Hand fighting, strength, leverage, it all translates.

Around the area, it’s becoming a trend for players to participate in both football and wrestling. Some sought wrestling out, others, like the entire Port Charlotte offensive line, needed more coaxing.

Though Pirate offensive line coach Jace Norus didn’t wrestle while he bolstered the Port Charlotte line, he knows the benefits. To help enlighten his players, he pushed for them to join the wrestling team to see first hand.

“It just gives them a sense of nastiness,” Norus said. “There is a lot of cross training involved. Whether it’s the head placement or hand placement or footwork, it all correlates into essentially blocking. It was like they were practicing football, just in a different sport.”

Some resisted, some dropped out after a few weeks and some lasted the entire season and even became the core of the program.

Among those were Abel Marquez and Okten Logue, who both had breakout seasons with the football team prior to giving wrestling a chance.

Logue had five sacks at defensive end for Port Charlotte in the fall and then won his first 14 bouts of the wrestling season, finishing third in districts at 220 pounds. Marquez is a rising tackle in the area and paired his strength with the quickness he acquired while wrestling to a 14-12 record on the mat in his first year.

Without another heavyweight, Marquez often wrestled smaller, shiftier opponents in practice, which he enjoyed. Similar to a speedy pass rusher, it allowed him to develop the quick feet to shutdown guys on the fringe of the pocket.

“They were quick and fast and could avoid me easily and get behind me easily,” Marquez said. “I had to adapt and get quicker on my feet. I now wrestle at heavyweight like I’m a lightweight.”

But it is’t just offensive lineman that benefit. Biaggio Fratterelli, a starting defensive lineman and reserve offensive lineman for Charlotte, was hyped as someone to keep an eye on by coach Evan Robinson before the wrestling season started and become one of Charlotte’s most improved by season’s end.

A sophomore wrestling on varsity for the first time, Fratterelli went 36-15 and became a district champion in the 220-pound weight class. In both sports, explosiveness was his best asset.

“In football, every play is explosive,” Fratterelli said. “There are some wrestlers who sit back and strike when they’re ready, but explosiveness is always a good thing to have. (This year) I looked at the top and saw the people I’d have to beat. I wrestled a few of them and they kicked my butt. It was kind of an eye-opening experience.”

Since spring football was canceled, Norus hasn’t gotten to see the results of his experiment just yet, but knows there are immediate benefits to the sport crossover and expects to see an uptick in production from his line.

“I’m hoping to see a little lower pad level, more shooting hands,” said Norus, who will get his first look at the players when practices begin on Monday.

“That cross training is the biggest thing the kids will get out’ve it. They’re able to practice the same skills that they use as offensive linemen on the mat and on the field.”